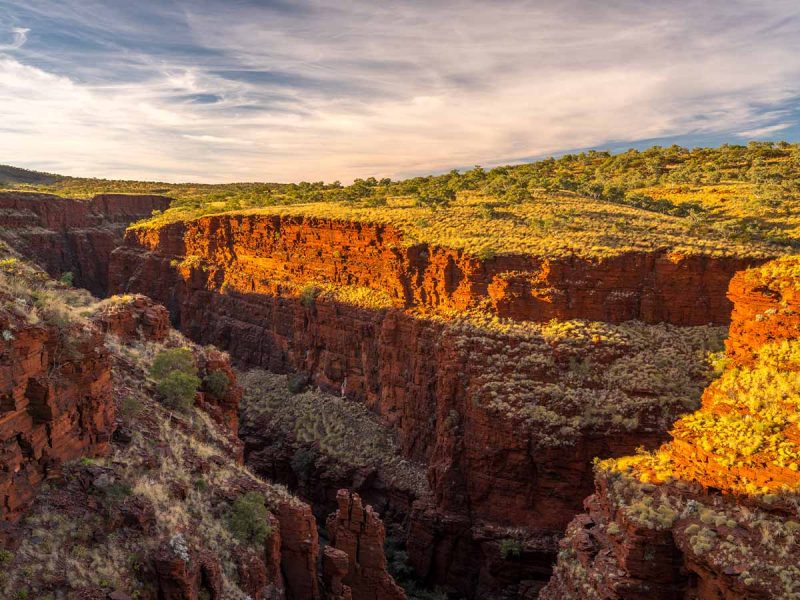 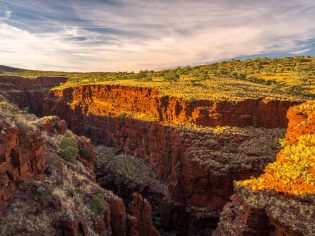 Explore these hidden gems and must-see destinations when you visit the North West of Western Australia.

The North West is huge, close to the size of Spain, Germany and the United Kingdom combined in fact. Broome and surrounds in the Kimberley’s west has some of the most dazzling beaches on the planet. Surreal colours of the azure Indian Ocean are intensified by big, blue skies and the surrounding red earth. The east Kimberley around Kununurra is one of the world’s last wilderness frontiers, an ancient land that’s rugged and rust-coloured, interspersed with surprisingly abundant trees and the mighty Ord River. Further south, the Pilbara might be famous for its iron ore, but for travellers it’s home to the wondrous Karijini National Park, a playground for hikers and waterfall chasers. Here, find a taste of what’s on offer in the North West.

The post-pandemic world of luxury travel has been redefined; we now want space without schedules, beauty without bling, and to really get away from it all. These properties tick all the boxes without sacrificing comfort. 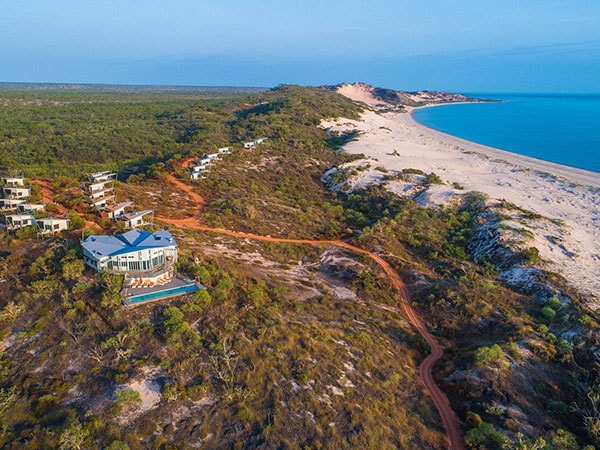 Hike the stunning gorges and swim in the freshwater springs during the day at El Questro Wilderness Park and then lose yourself stargazing at
night, either from the luxurious homestead, comfortable cabins or economical on-site tents.
While there, tackle the 1.5-kilometre return walk under a canopy of palms to Zebedee Springs followed by a restorative dip in its thermal waters.

A rite of passage for 4WD adventurers, the Gibb River Road stretches 660 kilometres from Kununurra to Derby, most of it unsealed. ‘The Gibb’ crosses vast outback plains, passes the Cockburn Ranges, tracks through epic cattle stations the size of small countries and strikes out across crocodile-inhabited rivers that flood in the wet season. 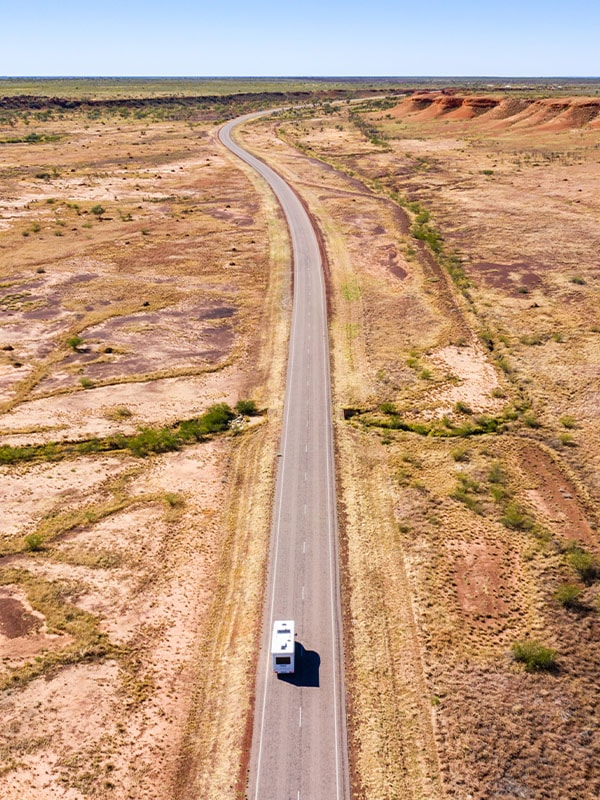 Watching the sunset over Cable Beach in Broome, cocktail in hand, is a holiday dream. While there, take a cruise on Roebuck Bay, a protected sea life haven that is home to dugongs, turtles, manta rays and the extraordinary snubfin dolphin, one of only two places in the world where they can be found. 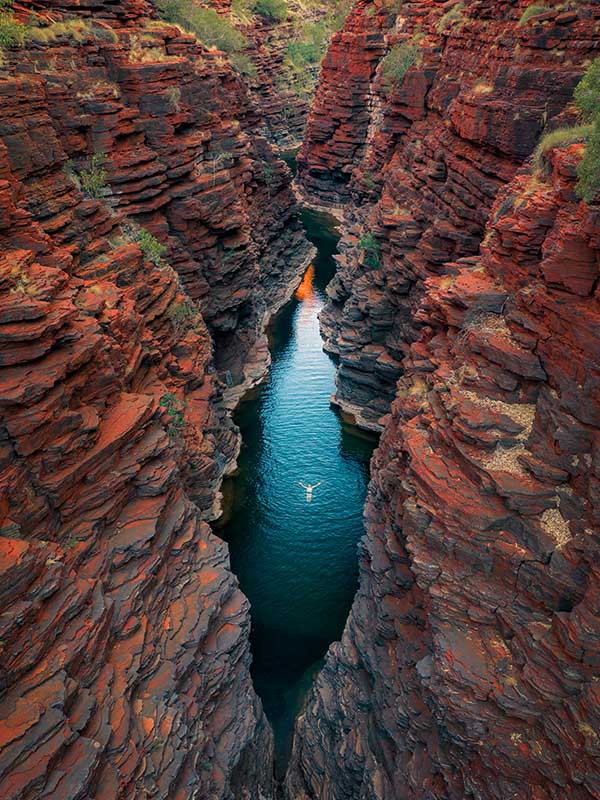 Karijini is a magnet for hikers and outdoor adventurists who love to climb through tunnels, scramble over boulders, squeeze through narrow chasms, paddle over crystal-clear waterways and be showered by plunging waterfalls. There are also less vigorous hikes, gentle ambles through shady fern oases to emerald waterholes, waterfalls, dramatic red-rock cliffs and spectacular gorges. 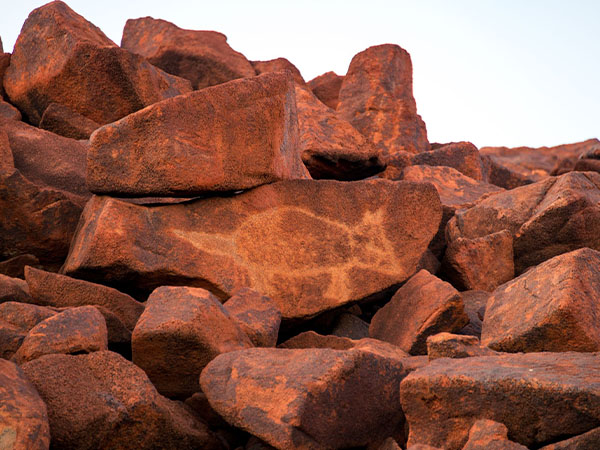 With more than 700 historic Indigenous archaeological sites and a staggering one million rock engravings, some of which date back roughly 30,000 years, the Burrup Peninsula is the perfect place to discover the ancient and transfixing history of the Pilbara. 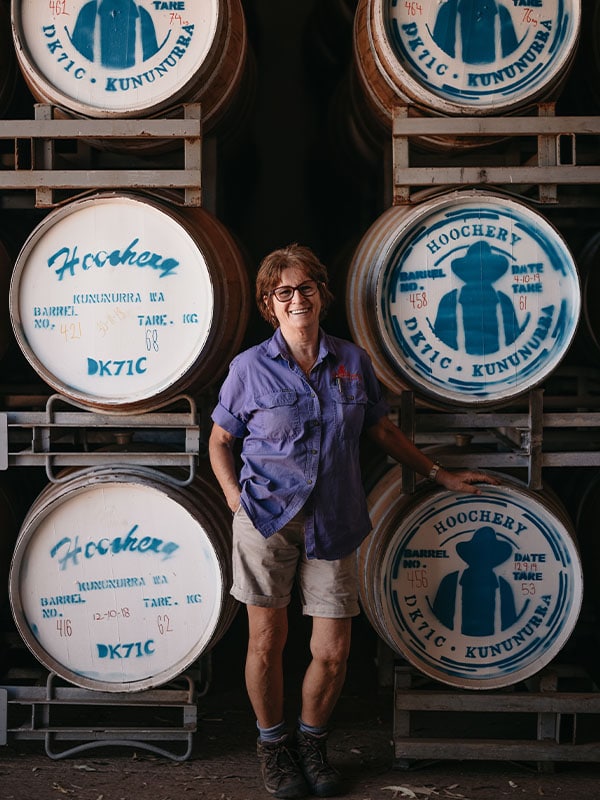 The spirits on offer at the Hoochery Distillery are created entirely by hand. (Image: Tourism Western Australia)

Located in Kununurra, The Hoochery is home to the oldest continuously operating (legal) still in WA, and its tacos are a perfect filler to accompany a tasting paddle of rum and gin. You must also try Spike’s Famous Beans and Corn Bread, named for the distillery’s founder Raymond ‘Spike’ Dessert III. 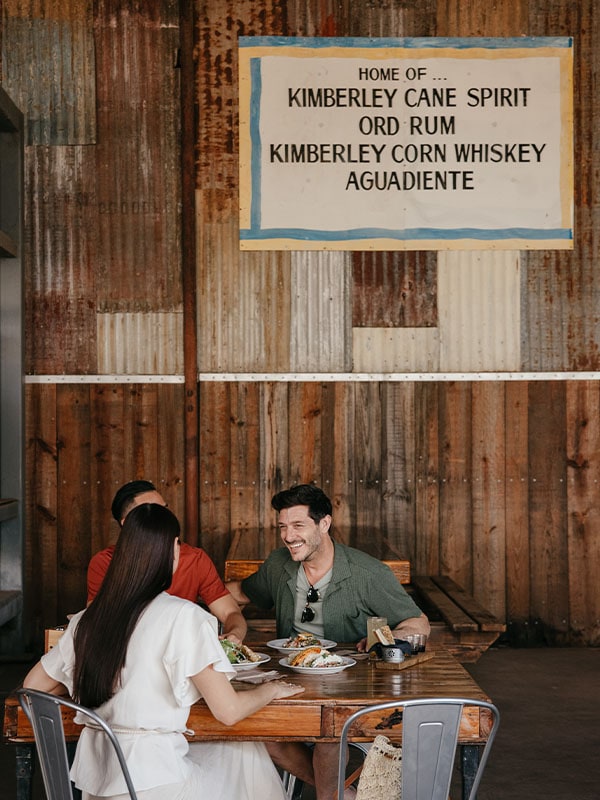 Having opened in 2021, Papa Fuego’s heady mix of signature cocktails, big Argentinian reds and South American- influenced dishes like flank steak cooked over fire and street-food favourites such as empanadas have proven to be a huge hit with Broome locals and visitors alike.

You can try a delicious and uniquely Australian take on an Italian staple at the Cichetti Club at Cable Beach Club: Paspaley pearl meat, prawn and crayfish tail tortellini.

The South-East Asian share plates at The Aarli, including kingfish sashimi, crispy eggplant and coriander pork banh mi sliders, make for a satisfying trip into Broome’s Chinatown, which can trace its origins back to the first camps and corrugated tin sheds set up by pearling crews in the 1880s.

Top things to do

Close to Kununurra, there’s Molly Springs, which is said to have fertility powers, or try Black Rock Falls, Valentine Springs, Middle Springs, and Emma Gorge, which is perfect for a post-hike swim.

Choosing one walk is like choosing a favourite child. There’s the World Heritage-listed Purnululu National Park, the four-tiered Mitchell Falls, or anywhere in Karijini National Park. But a highlight is Manning Gorge on the Gibb River Road at Mt Barnett Station. Start the three-kilometre walk (one way) by either swimming 100 metres across the river or using the little pull-rope boat to ferry across. The unshaded trail is marked with informal rock cairns and arrows, and the terrain is uneven, requiring scrambling over boulders. Do keep an eye out for rock art along the way. The beautiful deep gorge is best early in the season or after rain when the waterfalls are flowing. 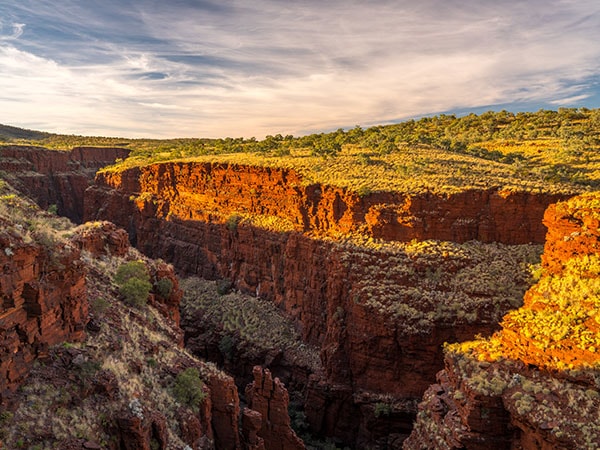 The rust-red and green landscape of Karijini National Park.

The 10-metre-plus tides in the Kimberley move fast, and when the rushing water is squeezed through two narrow gorges, the twin gaps at Talbot Bay, a naturally occurring horizontal waterfall is created, the only one in Australia. Known as the Horizontal Falls, the best way to view the phenomenon is from the air in a scenic flight or, for a thrill, by taking a boat cruise that rides through the rushing torrents.

Pick up a souvenir

What better souvenir than one you can wear every day and is so beautiful it becomes a conversation starter? Splurge on an impossible-to-resist South Sea pearl or Argyle pink diamond. 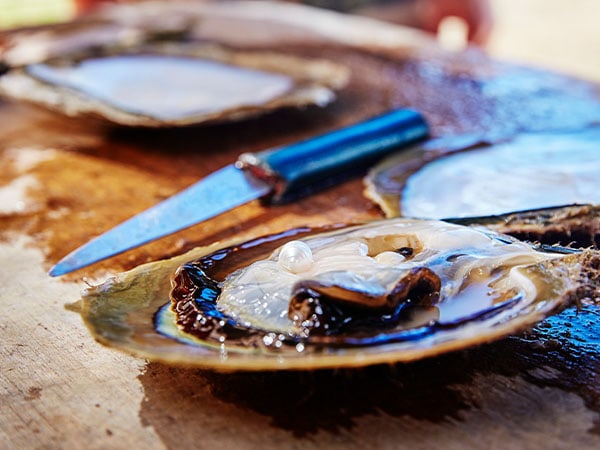 A scenic flight over the Kimberley

You’ve taken to the skies on a scenic flight or a helicopter ride over it. The perspective from above showcases the region’s beauty and its colossal size, which is unfathomable at ground level. Whether it’s from Broome out over the Buccaneer Archipelago, or from Kununurra over Lake Argyle and beyond, a scenic flight in the Kimberley is the one thing you can’t miss.