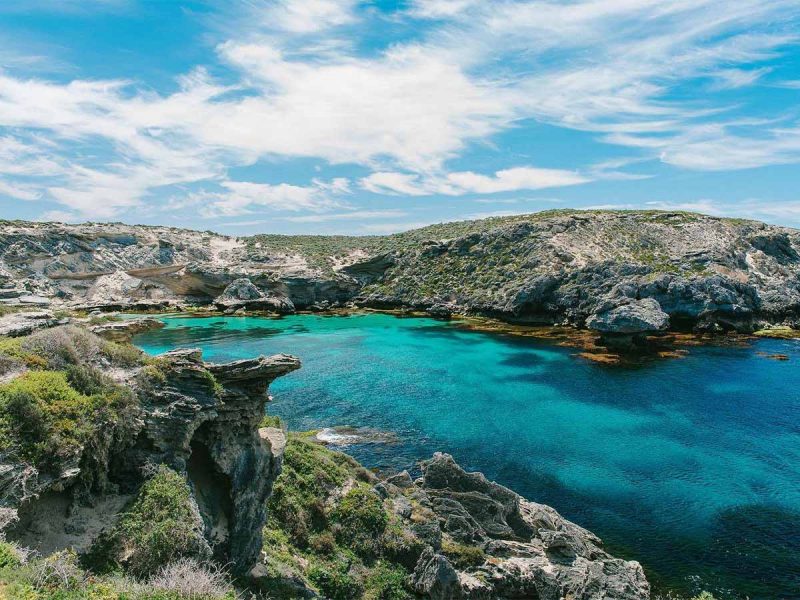 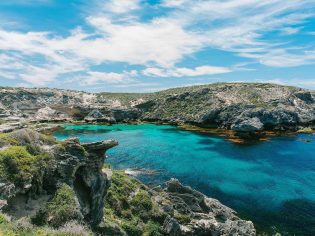 Here are the best beaches and bays to enjoy while visiting Rottnest Island.

Fancy a snorkel? Want to skirt Rottnest Island in a kayak or SUP? Grab your hat and sunscreen and while away the hours listening to the waves lap the shore while relaxing on Rottnest Island, located just 19 kilometres off the coast of Fremantle. Make the most of the beaches and bays on Rottnest Island by using our guide to determine which stretch of sand is right for you.

Give the new stretch of the bike path at The Basin a whirl and then find a shaded seating area to draw breath before donning snorkel and mask to explore this pretty-as-a-postcard pool, which is popular with families who converge here to paddle and snorkel in the clear, calm waters. The Basin is just 10 minutes from the main settlement and one of the top things to do on Rottnest Island is to congregate on the silky sand, play a game of beach cricket and watch the yachts tacking to and fro. 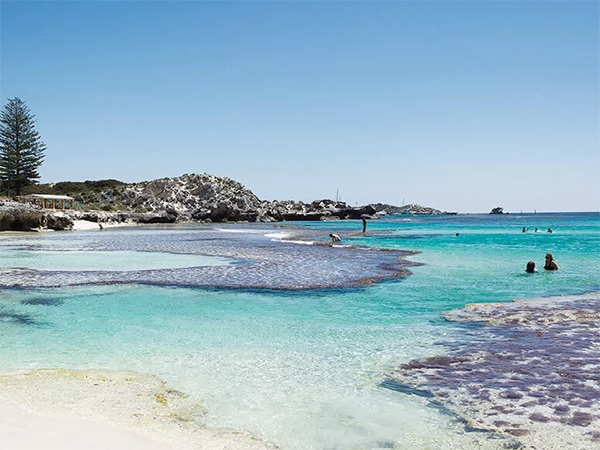 The simples pleasures of The Basin.

This beautiful bay is sheltered from the wind, making it an excellent spot for swimming or snorkelling. The bay is easy to get to, as it’s a designated stop on the Rottnest Island bus route, and only seven kilometres by bicycle from Thomson Bay. Under a cloudless blue sky, the turquoise waters beckon. Pick up a picnic from one of the nearby eateries, and enjoy Little Salmon Bay to the fullest.

Little Salmon Bay is sheltered from the chaos.

The ride to the western-most point of Rottnest Island is an easy 10 kilometres on a flat bitumen road from Thomson Bay Settlement. If you’d prefer a coastal hike, the West End (known as Koorinup to the Whadjuk Noongar First Nations people) connects with the Wadjemup Bidi Trail where you will find interpretive artwork, signage and audio yarns. The West End is a bit wild and woolly; if you’re looking for a place to swim, this isn’t it. 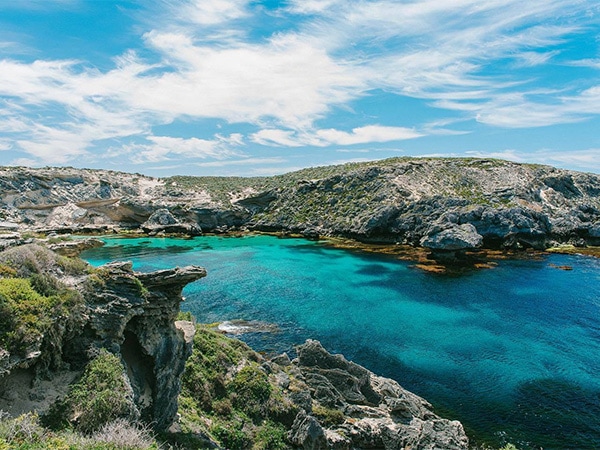 This is the West End – Rottnest Island’s most western point.

Parakeet Bay is always teeming with a variety of sea birds and is an extremely photogenic crescent of sand that is book-ended by rocky outcrops jutting out into the ocean. The pristine waters and powder-soft sands are paradise for sun worshippers and swimmers thanks to the shallow, calm waters. The bay has a sister beach, Little Parakeet Bay, and both epitomise the island idyll. 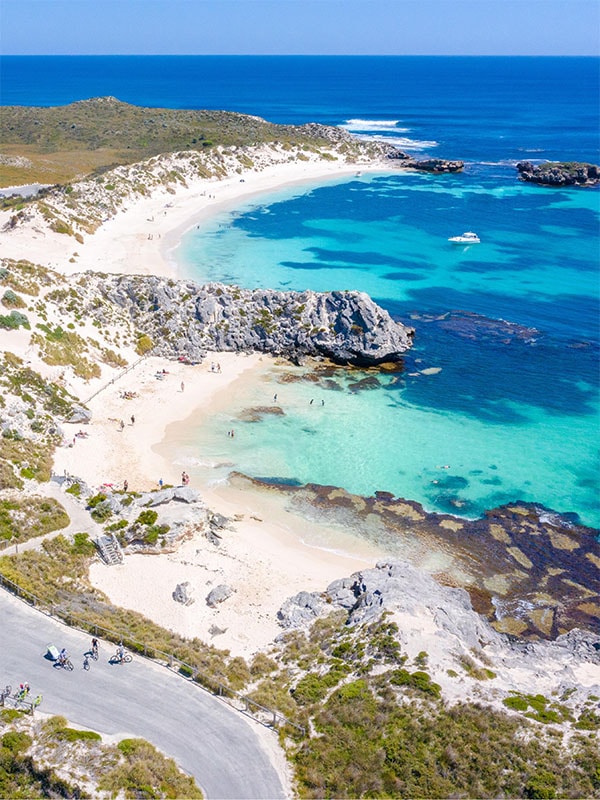 Parakeet Bay is always teeming with a variety of activity.

Pinky Beach has a little bit of something for everyone. Aerial shots of the beach, located across the dunes from the Discovery Parks Rottnest Island, one of the best places to stay on Rottnest Island, shows it off to best effect: there’s Bathurst Lighthouse at one end of the beach, which is usually bustling during the summer months, and protected spots to beat the heat for a swim, kayak, SUP or snorkel. After a day on the beach, head to Pinky’s Beach Club for cocktails. 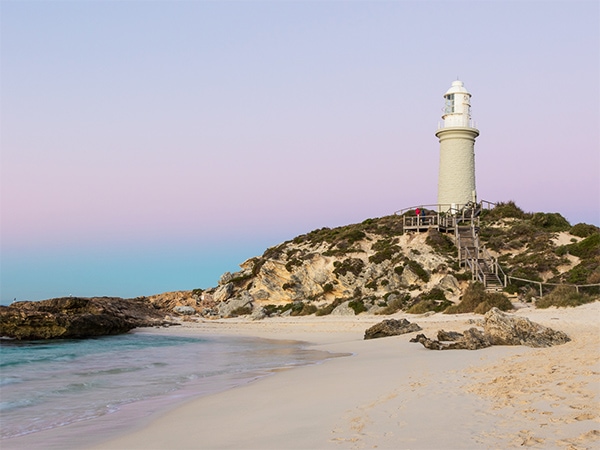 This lesser-known unpatrolled beach, which is protected in a southerly, curves for about 600 metres on the western side of the island. A set of stairs at the western end of the beach is right near to the bus stop that allows you to explore the beach with ease. The sand is stubbled with native grasses, which looks like unkempt facial hair, and sandwiched between the shoulders of two calcarenite headlands. 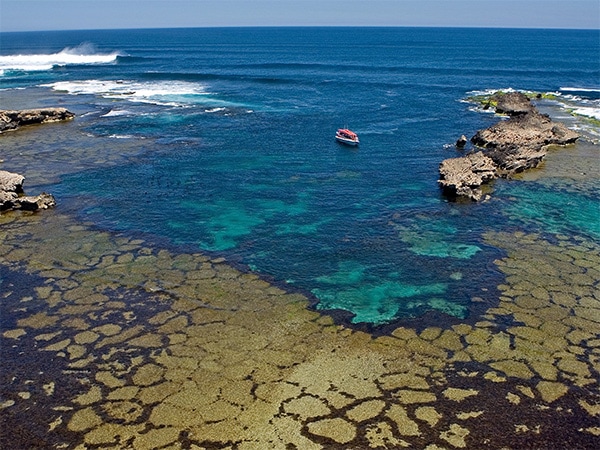 Rocky Beach by name and nature.

Visitors to Rottnest Island can now safely admire the seal colony luxuriating in the sunshine on the rock shelf below and spot humpback whales during the migration season. Roar past Cathedral Rocks onboard the Rottnest Express adventure boat or enjoy the amenity of the new viewing platform which juts out like an open drawer over the rock shelf. Warning: do not try and climb down to the beach; it’s too dangerous.

As you watch the sunset, drink in hand at Geordie Bay, you’ll understand why Perth locals have such a fondness for Rotto. It’s not just nostalgia; this relaxed slice of the west coast of Australia has evolved into a place that inspires a packed itinerary. There are self-contained cabins dotted along the shores of Geordie Bay, which is one of the most popular sandy beaches on the island for a multitude of reasons, including the fact you are likely to get the quintessential quokka selfie. 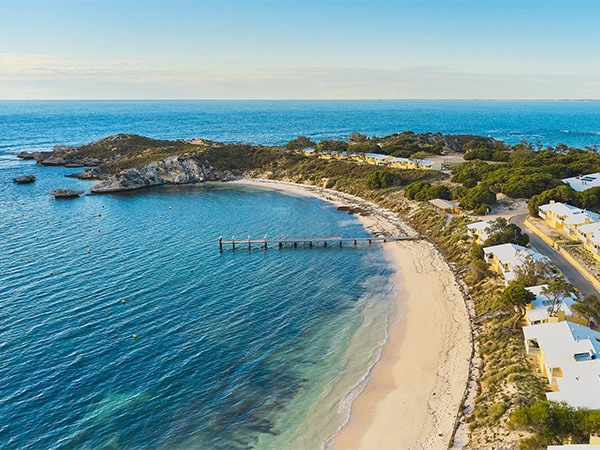 Geordie is one of the most popular sandy beaches on the island.

Thomson Bay has a roped-off swimming area, making it very popular with young families. After building sandcastles and dipping in and out of the cerulean seas all day, secure a day bed and kick back at Samphire Rottnest’s beach-style villas, which will transport you to Bali minus the airfare and the jetlag. Catch the ferry from Freo and you will find yourself clinking glasses with good-looking people from WA within about half an hour. 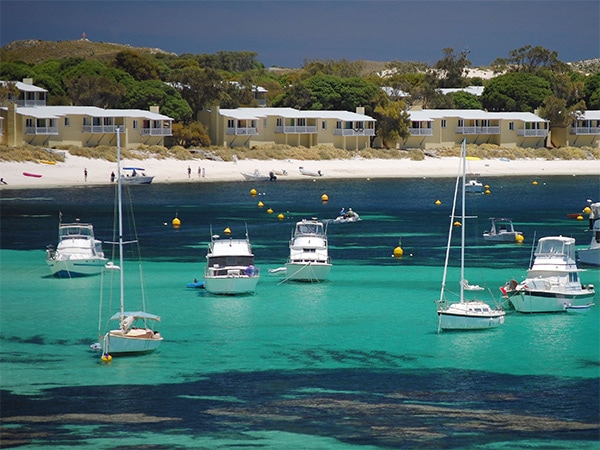 There are affordable holiday units located at Fays Bay that are conveniently located near to Rottnest Island’s beautiful beaches where the water is warmer than on Perth beaches thanks to the Leeuwin Current, a body of warm, tropical water that originates around Indonesia. Rotto is only 11 kilometres long and 4.8 kilometres at its widest, but there are plenty of beaches and patches of sand to choose from. Fays Bay is between Geordie Bay and The Basin, but is often less crowded. 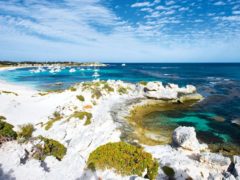 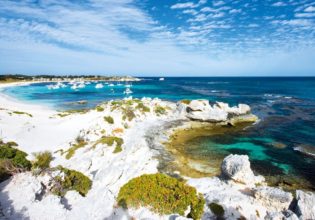