The highlights of hiking the serpentine trails of Rottnest Island 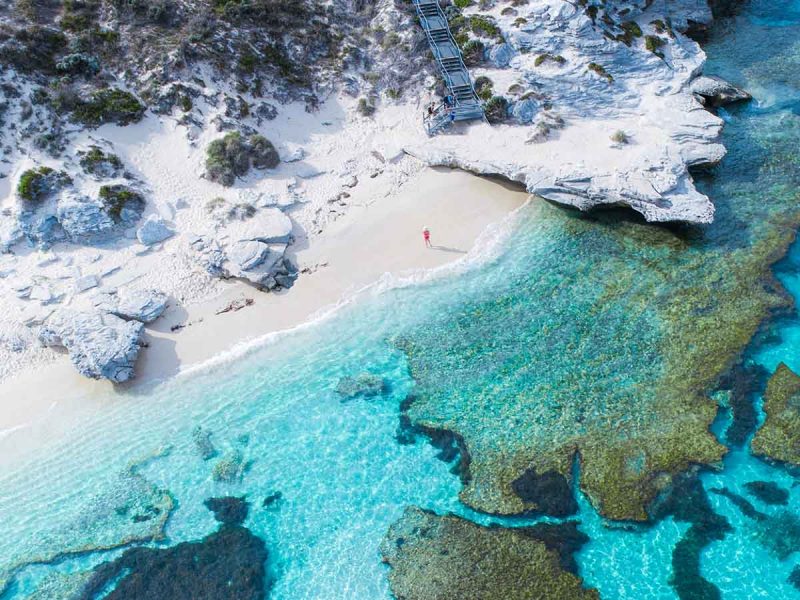 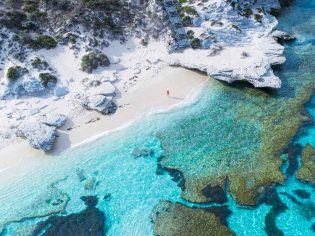 They’re cute, they’re cuddly and they even smile for the camera, but quokkas are far from the only attraction on Rottnest Island.

It’s not all about the quokkas

There’s a man on the floor, contorting himself at strange angles under a pub table. It would be an alarming sight anywhere else, but on Rottnest Island you get accustomed to people pulling questionable moves in pursuit of that prized holiday souvenir: a quokka selfie. The fuzzy marsupials reign ‘Rotto’, as WA locals fondly refer to it, and yes, their fathomless eyes and cheesy grins are irresistible. But I suspect their spell may also be Machiavellian: perhaps their charms are purposefully deployed to distract from Rottnest’s other natural beauties? 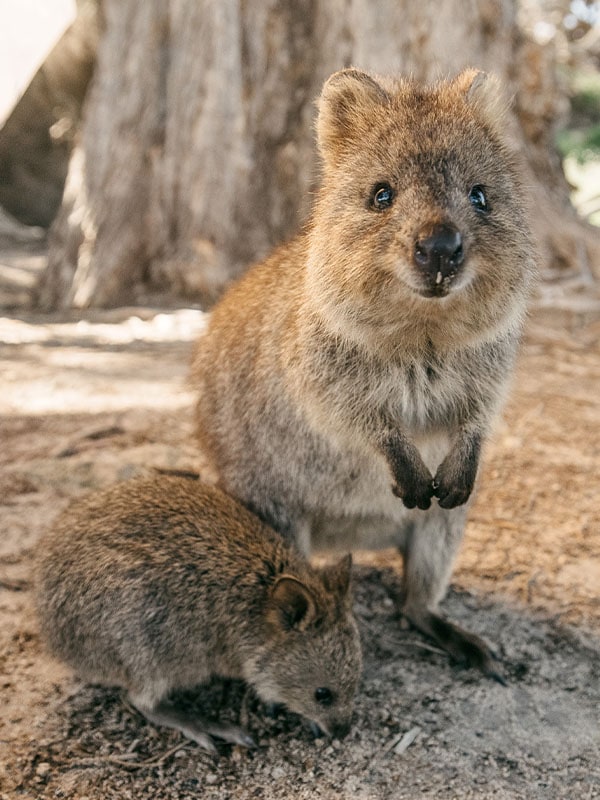 Being a seasoned Rotto fan, I’m all but immune to the ways of the quokka. I raise my eyebrows at a seagull, who’s also (fruitlessly) posing inside the glass at the beach-facing Hotel Rottnest. We share a look that says, “Aren’t humans nuts?” This trip, I’m swapping selfies for car-free Rottnest’s serpentine walking trails that trace some 45 kilometres of barely peopled parts of Wadjemup – the Whadjuk Noongar name for the island.

Hike one of five sections on the Wadjemup Bidi

The low-impact Wadjemup Bidi – bidi meaning track – is split into five sections that roam along sandy beaches and tranquil lagoons, push up scrubby hills to lighthouses and lookouts, and weave around scratchy rocks with views of fur seals, whales and dolphins.

It’s impressive, packing that much trail into an island only 11 kilometres long, not least because its creation came after significant cultural collaboration. I’m tackling the 9.7-kilometre Gabbi Karniny Bidi leg, which takes in samphire heaths, arching woodlands and boardwalks seeming to levitate over pancake-flat salt lakes. I could do it alone, but local experts The Hike Collective has guided options, so I join a small group of enthusiastic explorers.

Quietly launched in 2018, the trail is still very much under the radar. We see less than a handful of other souls on our four-hour journey. Lissa Rossetti leads the way. Once a home economics assistant, she says a health scare led to an epiphany and hiking was the answer. “I watched an indie film on the Camino Trail in Spain and came out and said, ‘I think I need to walk’,” she says. “When I’m in nature, I connect with it. I say hello to the birds and I whisper to the wind.” 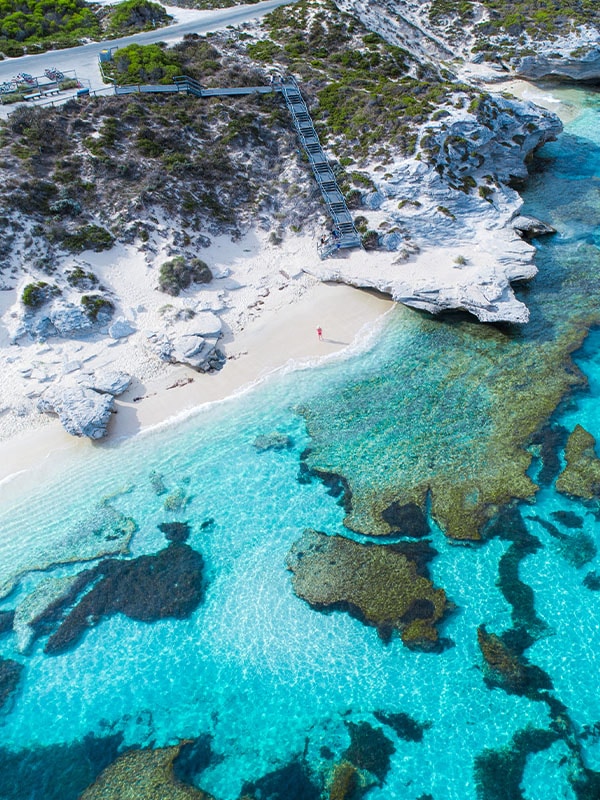 It’s a poetic introduction as we puff up a steep rise, rewarded with a periphery-pushing outlook of the island’s untrammelled interior. A monument details the island’s early visitors, Dutch navigators who came, saw and departed. “The first sailors reported good woodland and lots of bush cats,” says Lissa. “Then, in 1696, Willem de Vlamingh and his crew stopped in. They said it was full of rats and faeces and ‘Let’s get out of here’.”

The rats, as you’ve probably guessed, were actually quokkas, but the name stuck and Rottnest it is today. But well before then – artefacts suggest at least 27,000 years back – Aboriginal people walked these lands. Even after its separation from the mainland about 7000 years ago, the connection is strong. “Aboriginal culture believes Wadjemup is a place of transition between the physical and the spiritual world,” says Lissa, as we move through low coastal scrub where scents waft from grassy to saline and sugary honey blossom. “Once someone has died, their spirit comes to the island, then it’s taken by whales to its final resting place.” In keeping, the word Wadjemup translates to ‘place across the water where the spirits are’. 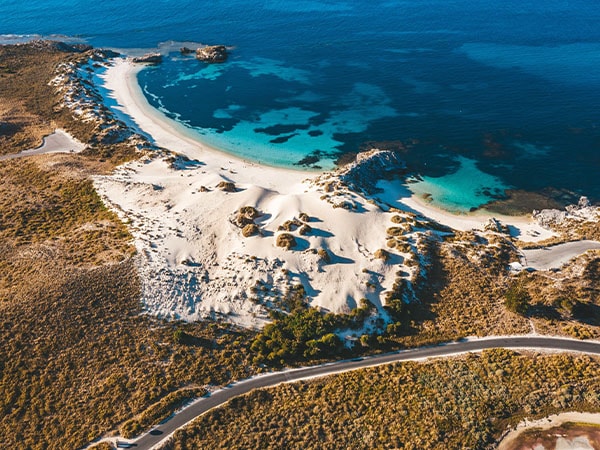 Heighten your appreciation for Wadjemup/Rottnest Island by going on an eco-friendly tour. (Image: Tourism Western Australia)

We take a lake-rim boardwalk that’s made from single-use plastic bags, one of many sustainability efforts incorporated into the Class A nature reserve. Within view is a wind turbine generating green energy – part of a plan to have renewables power 75 per cent of the island’s energy needs. Even the trail’s signposts are fashioned from recycled waste.

We reach Wadjemup Lighthouse, perched at the island’s highest point and pause for breath before staggering to Signal Ridge. During the Second World War, the Women’s Royal Australian Naval Service would relay light-flashed messages from surrounding vessels to the mainland. Rottnest was twice transformed into a defence base during global wartimes; historical army barracks and guns can still be seen today. 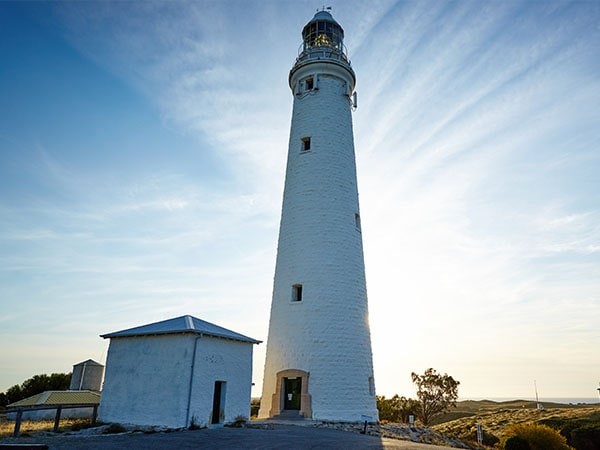 There are incredible views to be had when walking to locations such as Wadjemup Lighthouse. (Image: Tourism Western Australia)

Cool off at pretty beaches and bays

With our calf muscles enjoying the descent, we take a bend towards what I reckon is Rottnest’s most idyllic beach – and there are 63 to choose from. Little Parakeet Bay is a secluded pocket edged with limestone cliffs in tones of grey and ivory that plunge towards pale sands. Our coastal route leads to other little finds – bijou bays I’ve never laid eyes on – and I mentally bookmark them for future dips. 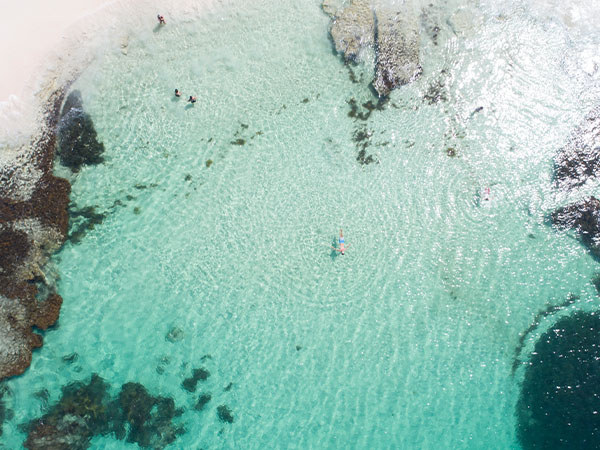 Back at Thomson Bay

I’m feeling very much in holiday mode by the time we return to the main settlement, Thomson Bay (named after the island’s first European residents who arrived in 1831, Robert Thomson, his wife and eight of their 12 children). Perth’s CBD skyline sits on the horizon, hazy across the ocean. “The tranquillity of Rotto is what I love,” says Lissa. “Sometimes you only have a night here and you get that rested feeling. It’s a place of restart, of refresh.”

It seems as good an excuse as any for a pick-me-up nap, after I retreat to the balcony of my room at the island’s newest accommodation, Samphire Rottnest. Following a rocky opening in 2020, the coastal-glam resort has settled into its skin. Dressed in beach tones, airy rooms are lulled by bubbling pool sounds below, with native plant gardens and retained mature trees hugging the day beds and cabanas. Its mod-Asian restaurant Lontara is so good people ferry across just to dine there (and hey, it’s only a 19-kilometre jaunt).

I rise at dawn for a jog which, like eschewing the quokkas, is a very un-Rottnest thing to do. I circle around a tall woodland that holds the graves of hundreds of Aboriginal people: leaders, warriors and lawmen who had been sent to the island’s penal settlement for about 100 years from the late 1830s. Put to hard labour, they built stone walls and colonial buildings, yet many never made it home. I pay my respects to the souls laid here, one of 17 protected Aboriginal heritage sites.

I cool off with a plunge into Samphire’s pool, then whoosh, onto the ferry with a renewed bounce in my step, marvelling at what a difference only 24 hours on Rottnest Island can make – even without a quokka selfie. 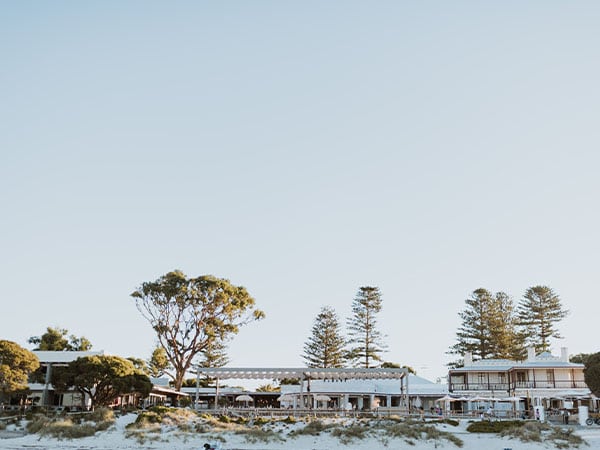 Rottnest Island may well be WA’s most sustainable place. As the only EarthCheck Certified Sustainable Destination in the state, the solar and wind-powered holiday isle (which also produces its own desalinated water) has just committed $62 million to upgrade its water and energy infrastructure.With plans to double the existing solar farm’s capacity and expand wind turbine power, it’s projected some 4000 tonnes of carbon emissions will be cut each year. 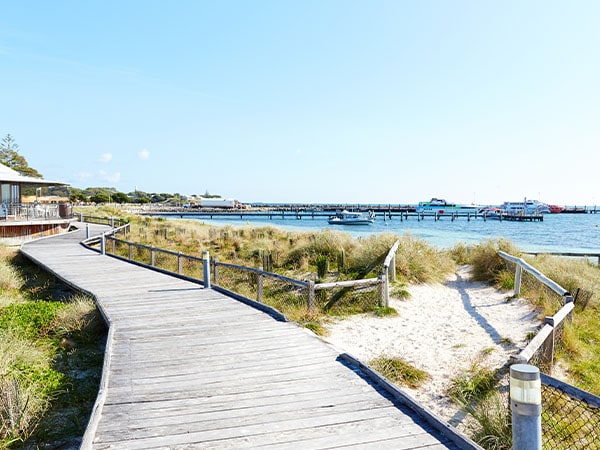