10 of Australia's weirdest festivals and races 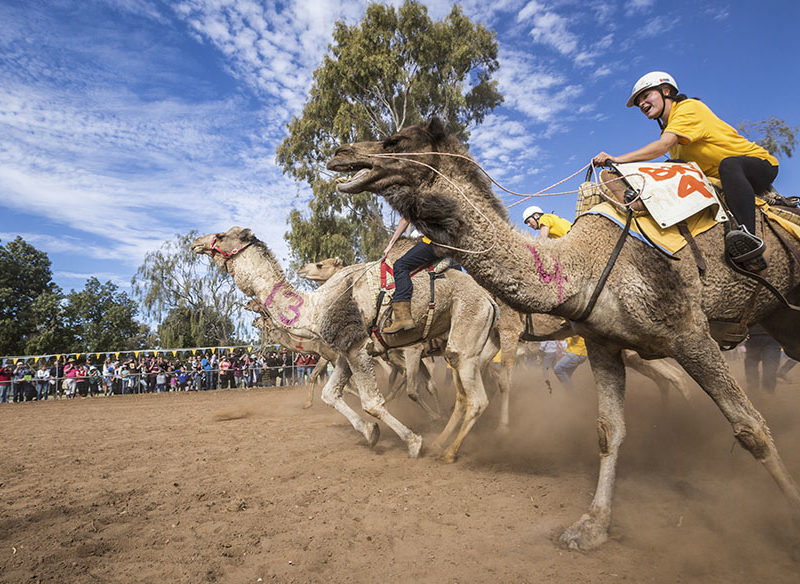 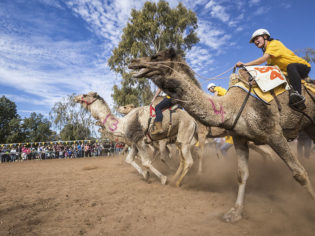 Australia’s dry sense of humour blossoms when anyone mentions festival and charity in the same sentence.

It’s not the subject of this festival so much as where it takes place that makes Parkes Elvis Festival unique.

Imagine a sleepy country town almost five hours’ drive west of Sydney (population 10,000) inundated by 15,000-plus Elvis fans and voyeurs for a few days in one of the hottest months of the year – that’s why it’s one of Australia’s quirkiest events. 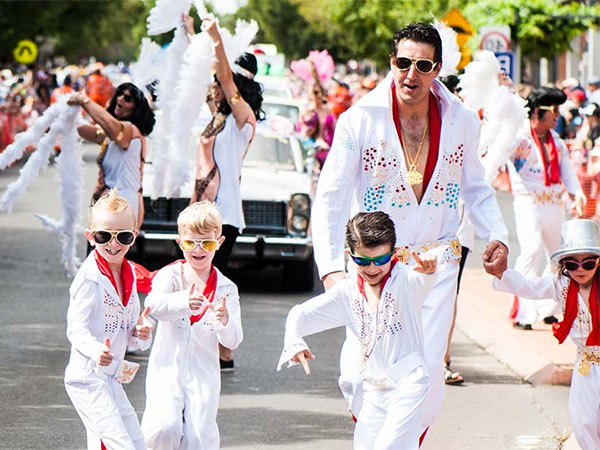 This Alice Springs perennial has been going on so long that many Australians probably think it’s quite normal, but put this annual mockery of the UK’s terribly posh Henly Royal Regatta back into context and you see that it is unadulterated lunacy.

A boat race, where teams of participants (rowers) run down a dry, sandy riverbed, Fred Flintstone-style, carrying a mock-up yacht – and it’s held around 1500km from any body of water of any consequence. Ironically it was once cancelled due to bad weather – too much rain! 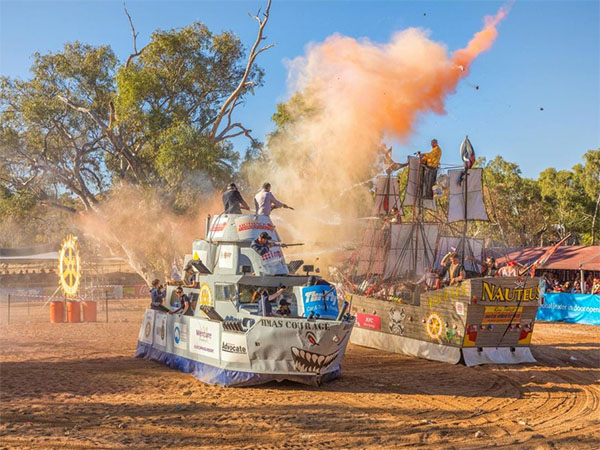 The most fun you can have without water

Quirky because it celebrates the underdog – in this case the clapped-out Australian car – and then proceeds to put in through a distinctly Australian torture test.

In the Redex-trail sprit, entrants in the Shitbox Rally must drive their under-$1000 ‘shitbox’ from Perth to Darwin via Broome (around 3,500km) on some roads (including the Gibb River Road) that the cars would have struggled with even in their younger years. 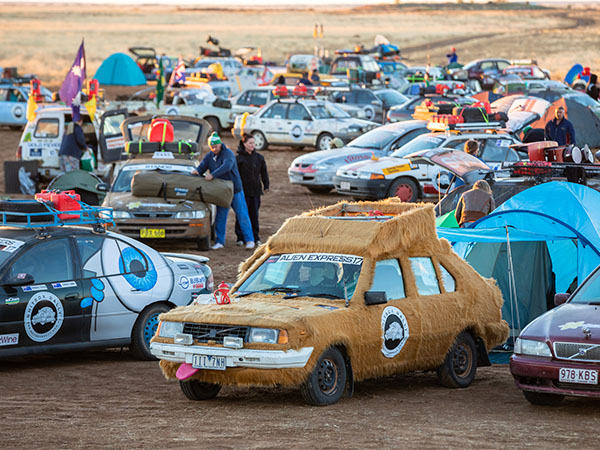 Quirky because it celebrates the underdog!

Our weirdness tends to swim upstream on Australia Day, so it’s no coincidence that South Australian fishing city Port Lincoln’s holds its “world famous” Tunarama to coincide with it.

The festival celebrates all things relating to the city’s most lucrative fish resource, highlighted by, naturally, the World Championship Tuna Toss. 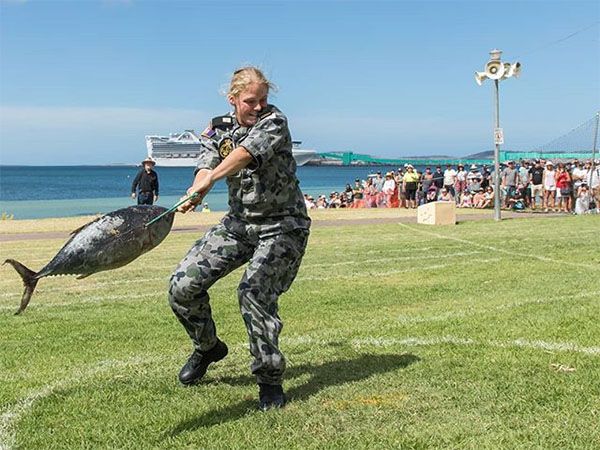 5. Boorowa’s Running of the Sheep (October)

Not quite the gore and frenetic activity of the similarly named Running of the Bulls in Spain.

In fact, the pinnacle of the action is a farmer on a quadbike and some dogs guiding a flock of sheep down the main street of the town, which lies about an hour north of Canberra. It’s the grand final of the Boorowa Hotel’s Irish Woolfest.

On Australia Day (again) the road outside the Sunshine Coast’s Ettamogah Pub turns into a thunderbox drag strip with the athletes acting as human horses as they endeavour to pull their loo quickest and be declared Dunny Race Champion of the World. Other towns, such as Werribee, Victoria, and Quilton in Outback Queensland, have also dabbled in dunny races. 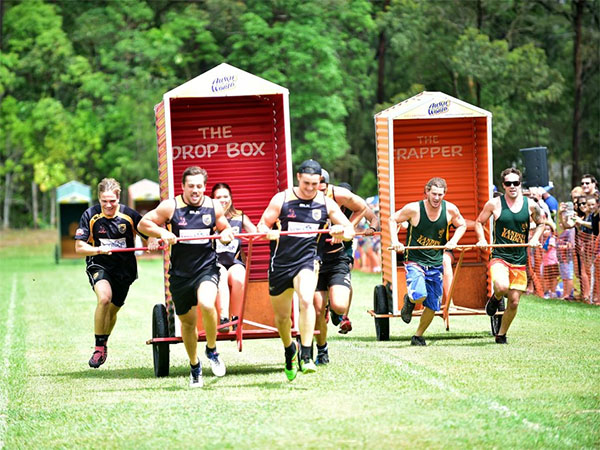 May the best dunny win

The marquee events at the Pilwarren Maslin Beach Nude Games, held on the banks of the Murray River, are the three-legged race, the sack race and the tug of war. Unlike the competitors, clothes are optional for spectators at this summertime festival.

Tully in Queensland scores the award for conjuring up the most obscure reason for a festival: Celebrating its reputation for rain and being “a pretty wet place”.

The symbol of this annual event, the Golden Gumboot, stands proud over a festival full of small-town energy with the mandatory float parade and, of course, gumboot throwing on the schedule.

There were 9,736 examples of the classic Aussie transport at the 2013 Deni Ute Muster, leading to claims that Deniliquin is indeed the ute capital of the free world. 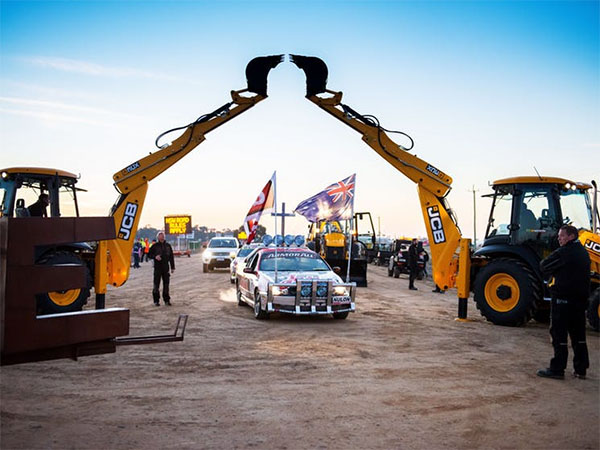 Deniliquin is indeed the ute capital of the free world

The Camel Cup is yet another example of Australian’s apparent love of racing animals that aren’t usually raced (see also the Compass Cup cow race).

The events attracts around 5000 people to Alice Springs with plenty of other attractions, such as rickshaw racing, for those not partial to seeing the ships of the desert battling it out on the track.