What they didn’t teach you about Ned Kelly at school 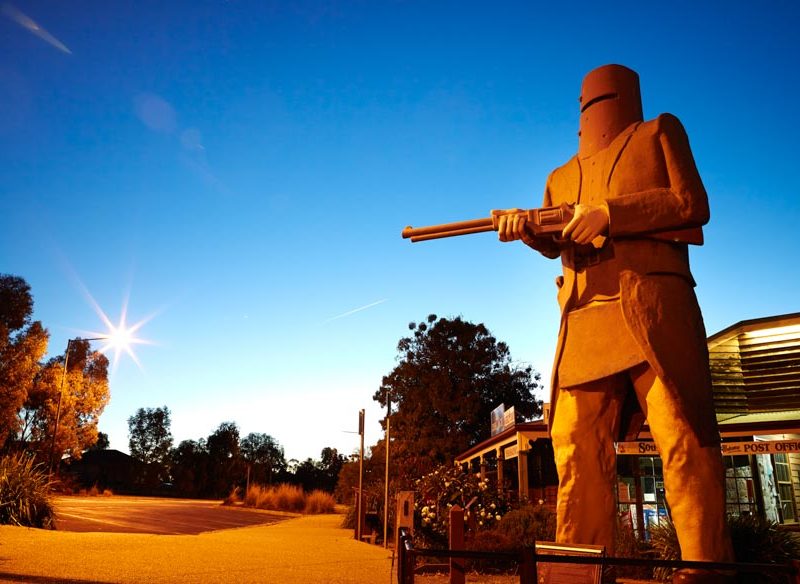 Victoria’s north-east is Kelly Country, and visitors to the towns of this region can follow in the footsteps of Australia’s most famous bushranger: from Beveridge, Ned’s first home town, to Glenrowan, the site of his last stand, and to Beechworth, where he was tried and imprisoned.
We asked Matt Shore – Ned Kelly enthusiast, researcher and founder/co-curator of the Ned Kelly Vault at Beechworth – to tell us some little-known fact.

1. Ned Kelly was the subject of the world’s first full-length feature film, The Story of The Kelly Gang, which was ﬁlmed near Melbourne in 1905.

Only a few fragments (about nine minutes) of the ﬁlm survive and it’s held by the National Film and Sound Archive in Canberra. The film was a huge hit with audiences in Australia, New Zealand and England.The film was released at a time when many people involved in the Kelly story (including Ned’s mother) were still alive.

He married Ned’s widowed mother Ellen in February 1874. George was only six years older than Ned. He was heavily involved in Ned’s horse-stealing escapades and disappeared around early 1878 as police attention over stock thefts was becoming a little too close for comfort. George fathered three children to Ellen. His son became a policeman in Western Australia and later an international horse-riding champion. George King’s disappearance remains one of the great unsolved mysteries of the Ned Kelly story.

One mill was supplying timber sleepers for the north-east railway project. Ned was eventually promoted to overseer. He is also said to have built a house from locally quarried pink granite near Glenrowan. The house survives and a completion date of ‘1876’ – probably carved by Ned – can still be seen at the back of the house.

4. Godfrey Castieu was the 13-year-old son of the Melbourne gaol governor.

While Ned was at the gaol awaiting execution, Mr Castieu brought his son into the gaol to meet the famous outlaw. Ned is supposed to have patted Godfrey on the head through the gaol bars and declared, “Son, I hope you grow up to be as ﬁne a man as your father”. Godfrey later became a star of early Australian cinema. In an extraordinary twist, he played the role of Ned Kelly in three ﬁlms.

5. Ned’s nephew, Frederick Foster, was a soldier in the First World War. When his mother died in 1898, he was brought back to Greta with his two sisters.

He was raised by Ned’s mother (Fred’s grandmother) and Ned’s surviving brother, Jim Kelly. Fred was killed at the battle of Lagnicourt on 15 April 1917. His name can be seen on the war memorial at Oxley, not far from Glenrowan.

Want to know more about Australia’s History? Check out 10 ways to explore Australia like an historian.