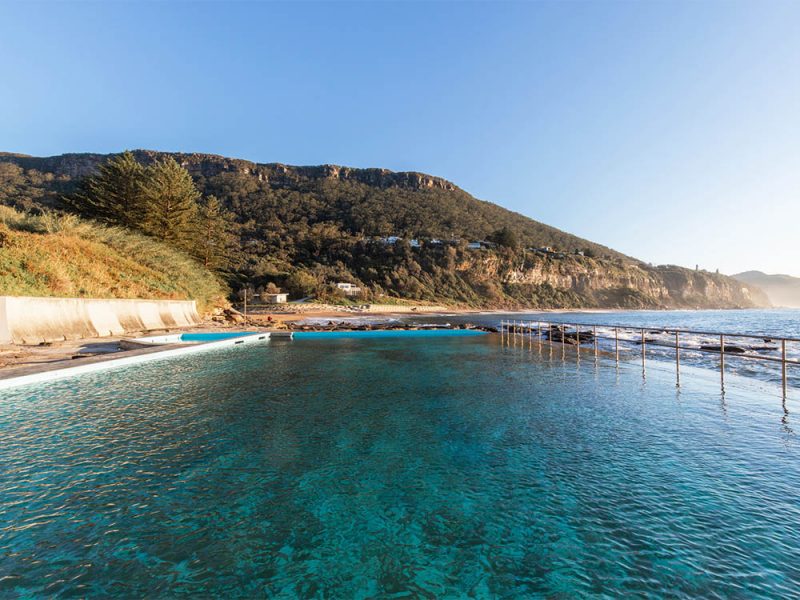 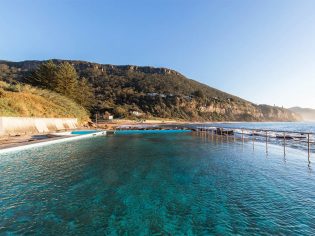 Wollongong is awash with places to swim, making it one of NSW’s greatest seaside cities.

From sun- drenched sea pools, to low-tide treasures and long, sandy beaches where you can surf or relax under a wide-open sky, here is are 10 of the best beaches and swimming spots in and around Wollongong.

Coledale Beach patrolled year-round and a popular spot with families for frisbee and French cricket. There is a campsite with limited availability that borders the North Gong beach, which is sandwiched between the crashing waves and crayon-green canopy of the Illawarra escarpment. The beach is a popular spot for surfers as it offers fairly consistent right and left-hand breaks. 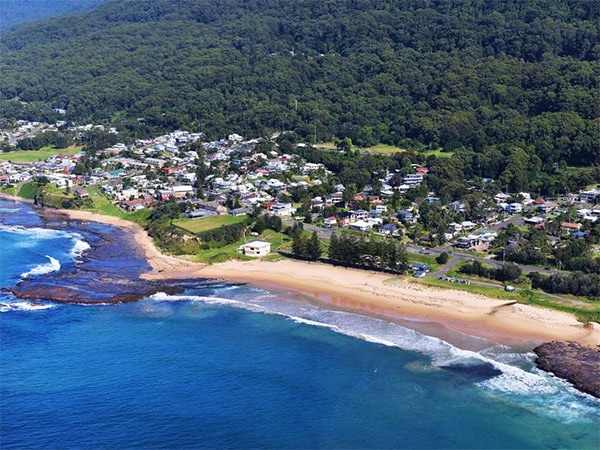 Coledale Beach is a popular spot with families.

The wind-whipped one-kilometre-long beach of Thirroul picks up swell from most directions. It’s a popular spot for surfers and day-trippers from Sydney who set up camp near the sandy seafront and make the most of a day dipping in and out of the sea. Swimmers enjoy doing backstroke in the Art Deco Olympic Pool, built in the 1930s, while ogling the Illawarra Escarpment. 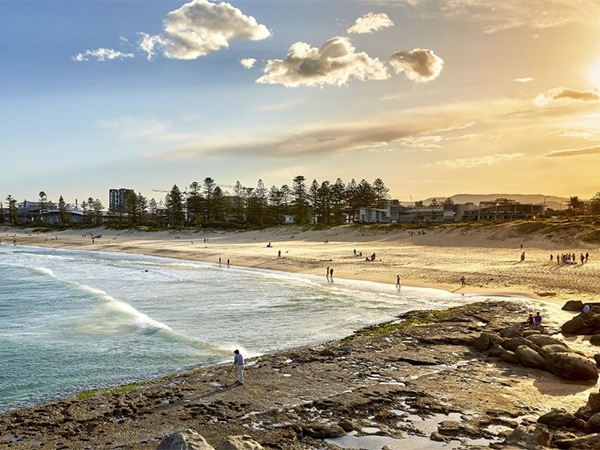 The wind-whipped one-kilometre-long beach of Thirroul.

Windang Beach is a gentle curve of sand located at the entrance to Lake Illawarra, some 15 kilometres south of Wollongong’s CBD. It’s a popular spot with families as there is a large foreshore park with a playground, barbecues, and covered picnic areas. The beach has great views over the famous Five Islands off the Wollongong coastline.

Stanwell Tops is famed for hang-gliding and paragliding and its position provides a panoramic view of the Illawarra escarpment and coastline from the Lawrence Hargraves Lookout on the northern slope. Corkscrew down to the base of Stanwell Tops and you will get to Stanwell Park Beach, a secluded cove popular with families (due to the large reserve and barbecue facilities) and surfers (due to the shifting beach break that works best in an east or northeast swell). 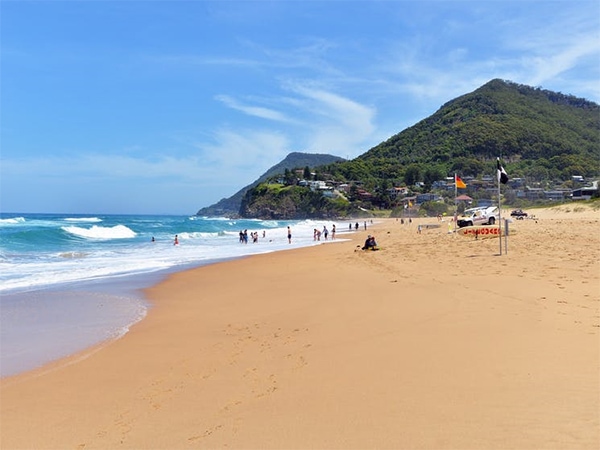 Sandon Point is an exposed point break that is known for clean, consistent waves, especially during winter. When the swell is on the small side, micro grommets are known to wade out at Sandon and get pushed onto waves by the instructors at Happy Days Surf School. The beach sweeps for 900 metres between Bulli and Waniora points, so there’s plenty of space for swimmers to spread out. 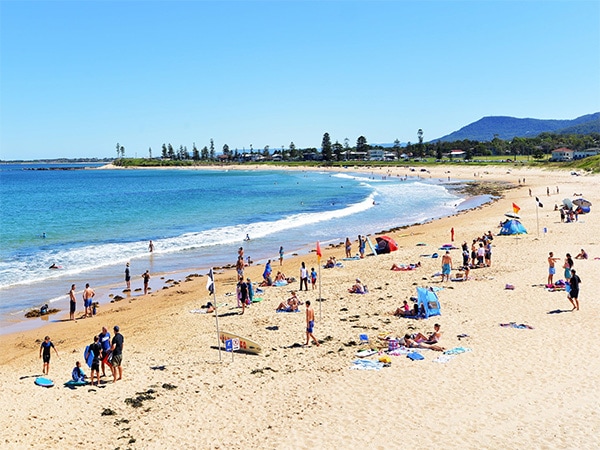 Wollongong City Beach is one of the city’s most popular beaches. The broad beach that fronts the city curls 3.1 kilometres from Flagstaff Point to the Port Kembla seawall and it’s backed by a foreshore reserve whiskered with coastal grasses. When it’s low tide, head to the northern end of the beach (in front of the historic Wollongong SLSC) to check the rock pools. The beach is popular with families as it’s adjacent to a park with a playground and picnic tables.

Wollongong City Beach is one of the city’s most popular beaches.

It is said that the word Woonona comes from a Wodi Wodi Aboriginal word meaning ‘place of young wallabies’ or ‘run now’, a term our First Peoples used to describe an aspect of the nearby escarpment. Ride your bike along the Wollongong shared cycleway to the beachside suburb, where the ideal swell angle is from the northeast. The beach also has a 50m pool with diving blocks and a historic Art Deco pavilion. 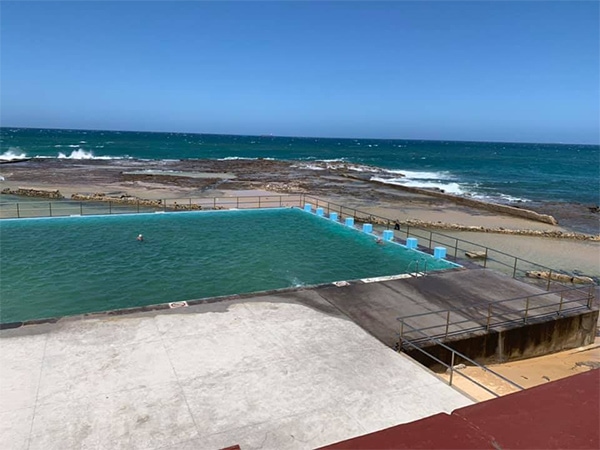 Coalcliff Beach is another coveted spot for families. Whether you’re looking for a calm stretch of sand to build a castle or a protected place to swim, the small beach in the northern suburbs of Wollongong is surrounded by craggy cliffs and rock platforms, which make it a popular fishing spot. There is a beautiful ocean pool tucked under the cliffs where dense bushland spills down to the sea. 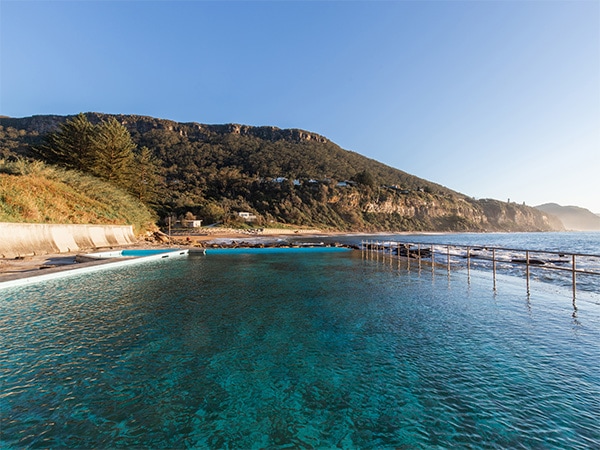 There is a beautiful ocean pool tucked under the cliffs.

Joggers who love to run barefoot will appreciate Port Kembla Beach, which stretches for about 6.6 kilometres and is only 11 kilometres from Wollongong’s CBD. We love this beach for its dinky dressing sheds, which were constructed in 1912, and its Olympic pool carved into the northern corner of the cliff face. All up, there are three pools: a toddler’s pool, paddling pool and slightly deeper kiddies pool. 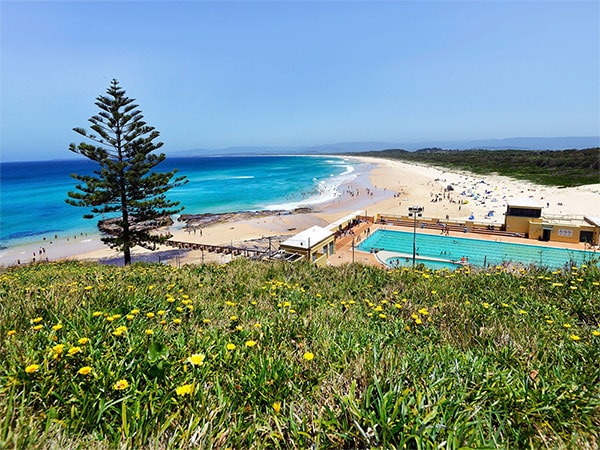 The word is starting to spread about just how good the lifestyle is in Wollongong. Kick off your day with a few laps at the Bulli Rock Pool where you are bound to meet smug sea-changers who reckon they haven’t looked back since shrugging off their big-city stresses. After a few lazy laps in this beautiful 50-metre pool (which dates back to the 1930s) you will want to join them. 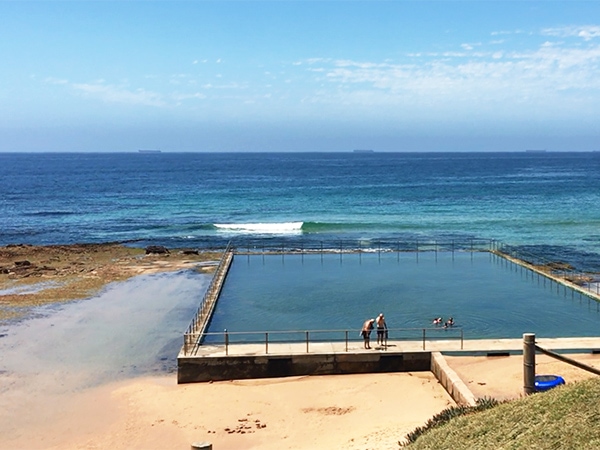 Kick off your day with a few laps at the Bulli Rock Pool.

Bellambi also has a rock pool set into the southern rock shelf of the two-kilometre-long beach, which is a popular spot for swimming, surfing and fishing off the boat ramp. Hire a bike and cycle along the shared pathway, which makes the beach accessible from Wollongong. A small creek runs along the back of the beach and there are a few cafes nearby. Come to the beach early when there is zero swell to see the sunrise and start the day with a refreshing dip.

Find more travel tips and itineraries in our Ultimate guide to Wollongong holidays. 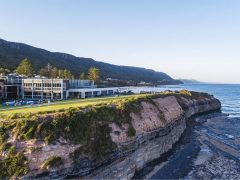 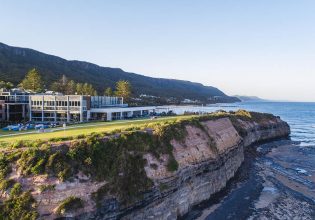 Discover our pick of the best bars and pubs in Wollongong Much of Wollongong’s charm lies in the friendliness of the locals, who have an ease and a... 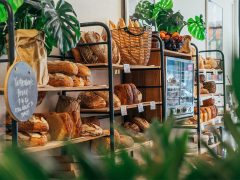 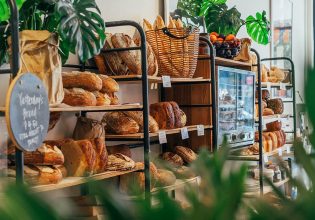 The best places to eat with kids in Kiama

Find food to please kids of all ages from breakfast through to dinner in Kiama. When it comes to great family-friendly places to eat, the sheer numbe... 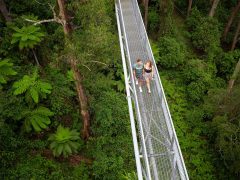 The best things to do with kids in Kiama

From exploring its rugged coastline, to treetop walks in the hinterland, and adrenalin-fuelled adventure parks, the list of family-friendly things to ... 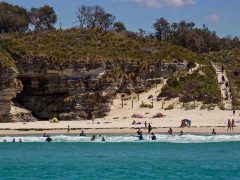 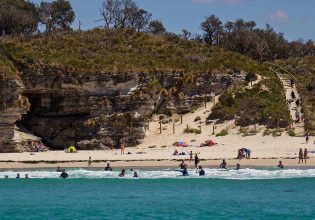 Discover more about Jervis Bay by exploring it via land and sea. To explore all 102 square kilometres of the bay and village, which is juxtaposed wit... 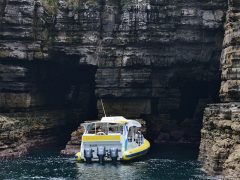