A guide to Phillip Island’s beaches 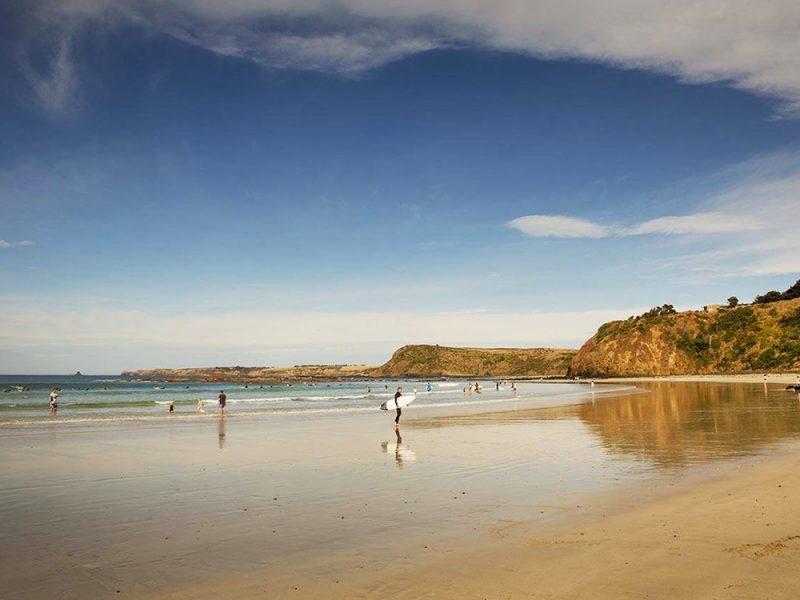 Fishing, surfing, swimming, sunbaking: the choice is yours on Phillip Island’s plentiful supply of beaches.

Home to Victoria’s first National Surfing Reserve, Phillip Island is a bit of a surfer’s paradise, but there’s plenty of coastal real estate for other activities too. Generally speaking, the sheltered north-side of the island is great for swimming and stand-up paddleboarding, while the south-side features more wild surf beaches, better suited to surfing and bodyboarding. Read on to learn about six of the island’s best.

Don’t miss: The top things to do on Phillip Island

Home of the fabled ‘Express Point’, a barrelling reef break that’s suitable only for experienced surfers, it’s known to many locals as the island’s premier wave. There’s plenty of white water action for beginners and bodyboarders too, however, with a number of surf schools offering lessons (try Girls on Board, Island Surfboards or Archy Surf) and surf shops with boards and wetsuits for hire. The one-kilometre-long beach is also great for a spot of family rockpooling – during low tide, there are pools to explore at both ends of the beach, and some are even large enough to snorkel in. After a morning spent in the sun, sand and sea, power up with a well-earned Allpress coffee and housemade sausage roll at the Smiths Beach General Store. 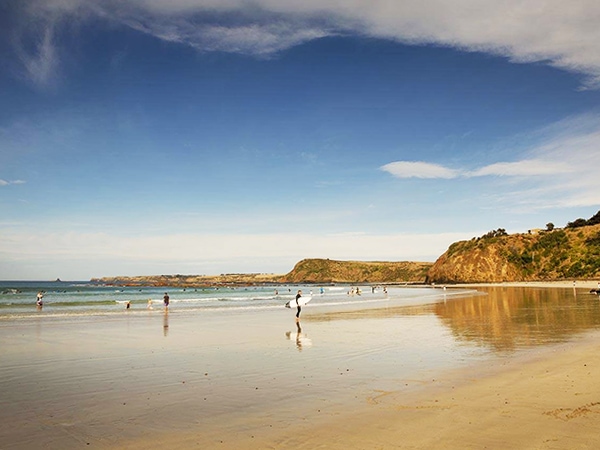 Surf’s up at Smith’s Beach.

See also: neighbouring YCW Beach, which has plenty of gentle and consistent swells.

As the name suggests, this golden arc of silica is backed by – and peppered with – jagged, brick-red rocks. Not to be confused with ‘Red Rock’, in the island’s south-east, Red Rock Beach is a sheltered and scenic setting on the island’s north that’s great for brisk beach walks come sunrise or sunset, for lazy family picnics, and for hopping between wildlife-rich rockpools. The shallow and clear waters make it one of the safer spots for swimming too. Keen anglers also frequent these parts, which are popular for rock fishing, often reeling in King George whiting, snapper and flathead. 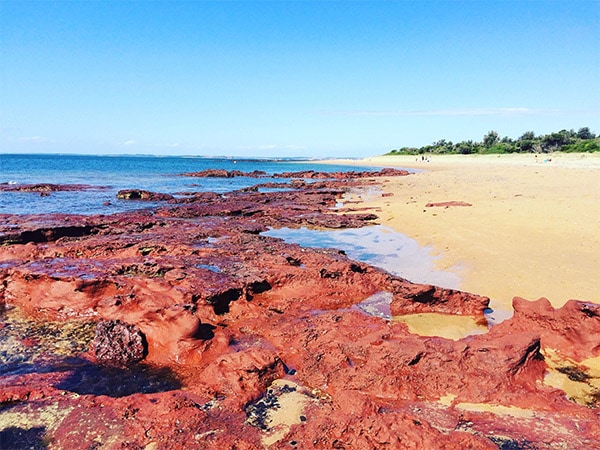 Red Rock Beach is a sheltered and scenic setting.

A vast stretch of sand – the longest and most exposed on all of Phillip Island, in fact – Cape Woolamai is where you’ll find some of the best beach breaks in Victoria, with waves consistently measuring around 1.7 metres. Seasoned surfers will enjoy the long lefts and rights that peel over the wide banks.

Although the waters are patrolled by the Woolamai Surf Lifesaving Club during the summer months, the surf here is notoriously dangerous, so those looking for somewhere to take a dip are better off taking their beach towels to a different belt of sand.

The beach is surrounded by the Cape Woolamai State Faunal Reserve, which is a great spot for a ramble or two: exploit one of the four coastal walking track loops, and admire the surf from the safety of the lookout points above (Cape Woolamai is Phillip Island’s highest point). There’s a small kiosk turning out hot coffees and cold ice creams too, or for something more substantial pay a visit to the nearby Wooli General.

Cape Woolamai is where you’ll find some of the best beach breaks in Victoria.

Primed for adventures both above and below the waterline, this snug little bay welcomes surfers, snorkelers, beach walkers, swimmers and fishermen. You can even take a little expedition to see the rusted remains of the SS Speke, which was shipwrecked on this very shore in 1906. Take your little ones and collect some shells, or inspect the beach’s many rock pools. The only downside to Kitty Miller Bay Beach is the lack of facilities: there are no toilets, showers or shops in the vicinity, but it’s only a 10-minute drive from the main township of Cowes. 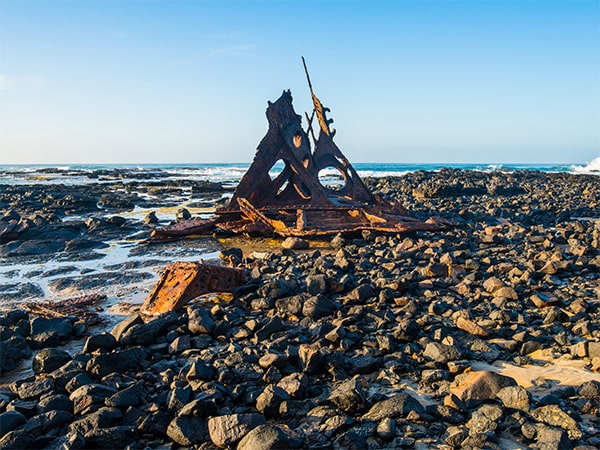 SS Speke – the most famous of Phillip Island shipwrecks .

Offering visitors something a little different, this southern beach, which is effectively part of Cape Woolamai Surf Beach, has some secret features that can only be accessed during low tide: sea caves. Formed by erosion of the red basalt rocks over many years, you can wander through these hollowed out chambers and gaze up through naturally formed holes in its ceiling. From the Forrest Caves Car Park it’s around a 45-minute walk, round-trip.

Due to its strong currents, high waves and rips, Forrest Caves Beach isn’t best suited to swimmers, but surfers and anglers often drop by. And throughout spring, summer and autumn, a plethora of feathered visitors stop by: the beach’s large sand dunes become home to thousands of short-tailed shearwaters between October and April, while hooded plovers come to nest on the beach between August and March.

Wander through the hollowed out chambers of Forrest Caves.

Don’t miss: Where to eat & drink on Phillip Island

It wouldn’t be right to list Phillip Island’s best beaches without naming what is arguably its most popular sweep of sand: Cowes. A small swimming beach that’s right in the thick of the action, Cowes Beach is just a few steps from the township’s shops and cafes, making it a great spot for a lazy afternoon of sunbaking or a picnic. And once you’ve had your fill of sunshine and saltwater, pootle along the jetty and peer into local anglers’ buckets before hitting Thompson Avenue for a cool glass of crisp rosé at one of the bars or pubs.

Cowes Beach is just a few steps from the township’s shops and cafes. 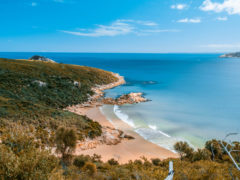 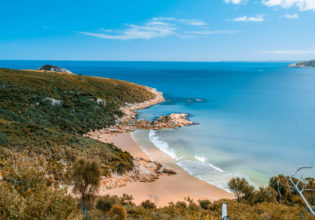 Located at the southern tip of Australia’s mainland, Wilsons Promontory is a coastal wilderness of golden beaches and bushland trails which serves a... 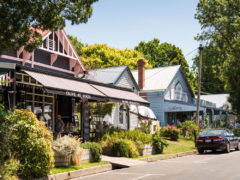 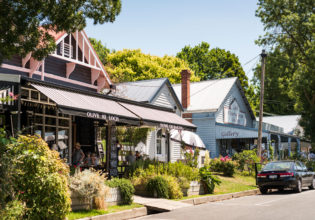 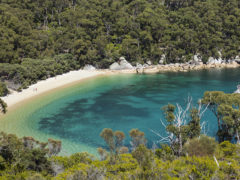