A first-timer's guide to the best of Perth 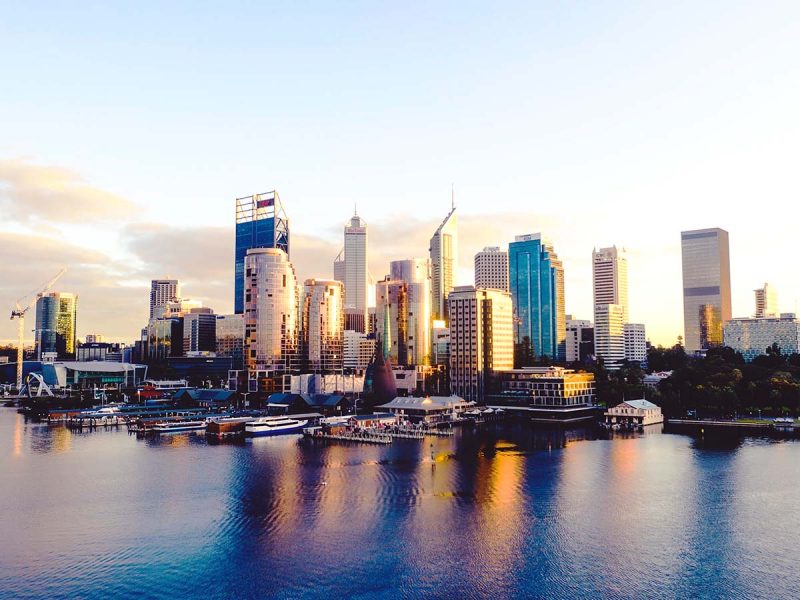 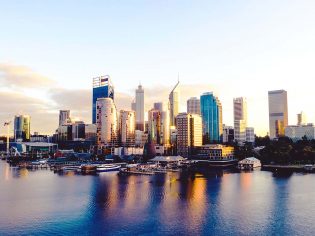 The Western Australia capital is a vibrant, multicultural city that relishes its position as the anchor for the largest state in the country.

The sparkling modern metropolis sits on the traditional Country of the Whadjuk Noongar peoples, with a history that traces a line through tens of thousands of years. Its enviable position on the edge of the Swan River and close to the stunning WA coastline means that its locals have a best-of-all-worlds lifestyle that includes jaunts to beaches the likes of Cottesloe and Bathers, bar-hopping through funky inner-city neighbourhoods, eating at some of the most interesting restaurants in the state, swimming with wild dolphins (and spotting penguins) in its outer suburbs, and heading beyond the city limits on easy day trips to places such as the Swan Valley, home of the state’s oldest wine region. Here, find a taste of the best places to stay, dine and explore in Perth. 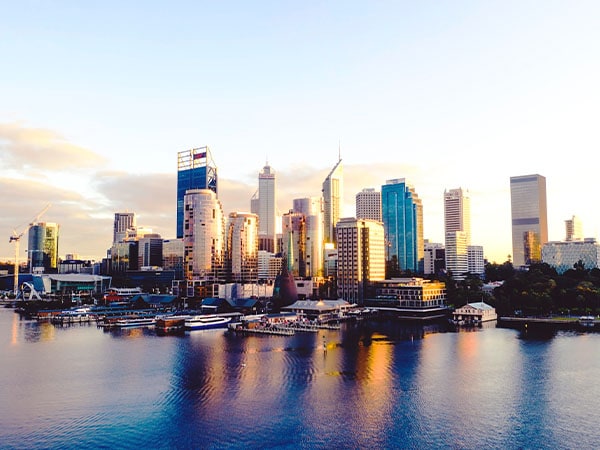 The former residences of the warders of Fremantle Prison, this historic row of limestone cottages have been transformed into a funky boutique hotel that melds the (very) old with the new to pared-back, stylish effect. 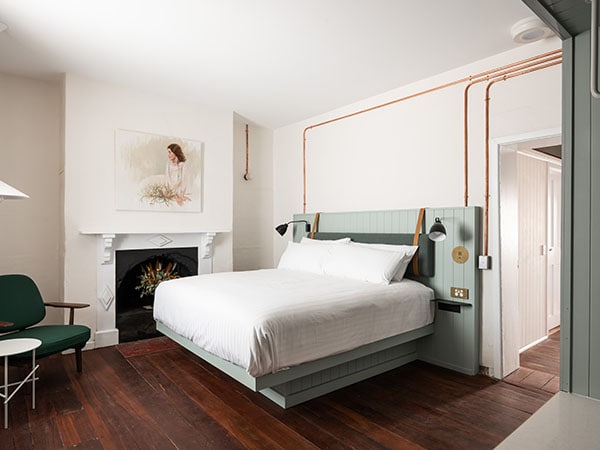 Stay in one of the inviting rooms at Warders Hotel. (Image: Dion Robeson)

Tucked into a side street in Northbridge, the Alex Hotel houses 74 rooms (some with cool bunk beds), bright and breezy communal living spaces, a rooftop wine bar and open-to-all lobby cafe. 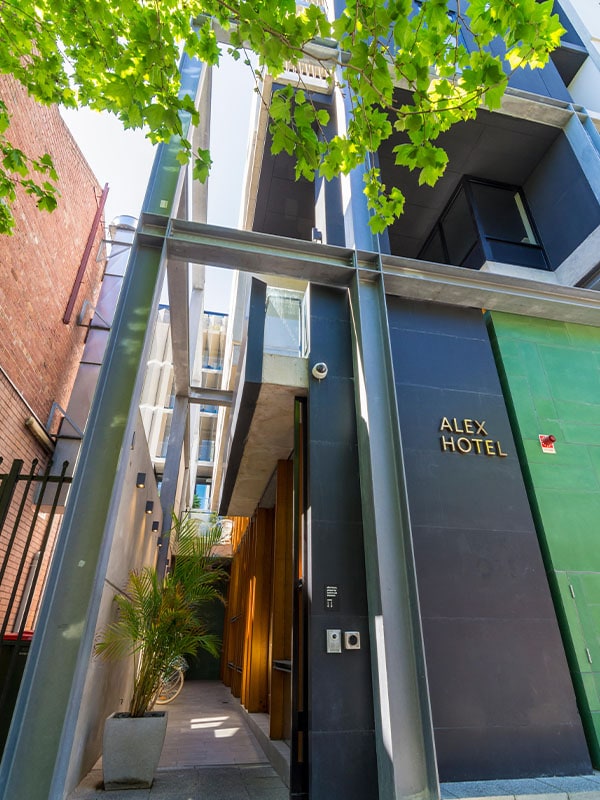 Sitting behind an unassuming frontage, the rooms at Fremantle’s Hougoumont Hotel are constructed from shipping containers that have been styled up with sleek design and luxe touches.

This heritage grand hotel has had a contemporary refit, with elegant rooms upstairs and interesting restaurants downstairs. 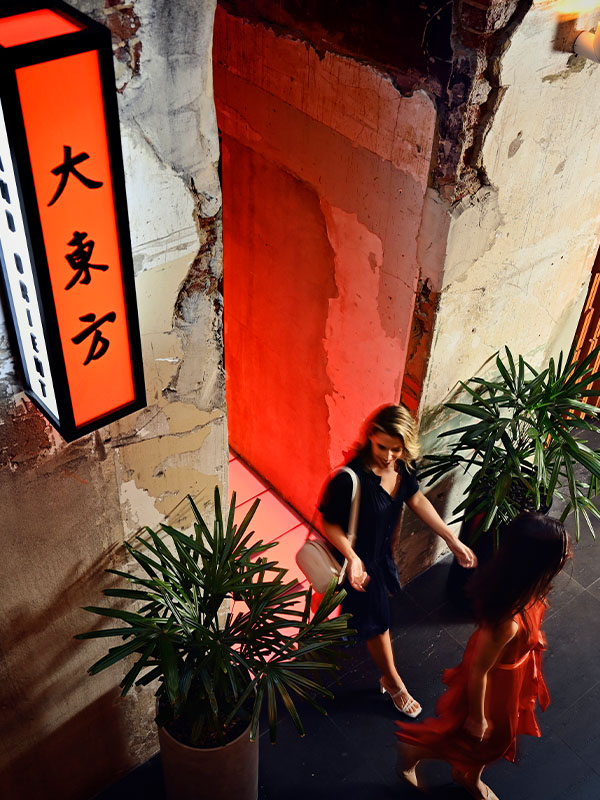 Where to eat and drink

Perth has become renowned for its small-bar culture in the past few years, with cosy boltholes tucked behind skinny shopfronts and below-ground cellars in the likes of Northbridge, Fremantle, Mount Lawley and the CBD among other locales. The snug spaces might be small in stature but they are big in atmosphere and cool cred, with Mrs Brown’s (housed in a Fremantle Victorian terrace), Mechanics Institute and Joe’s Juice Joint in Northbridge and Bobèche in the city names to know.

Housed within the labyrinth of the State Buildings, Petition has a welcoming, casual feel, with helpful wait staff and a menu of interesting, flavoursome dishes that are perfect for sharing: we can highly recommend the broccoli and mixed grain salad, Cambray Cheese sheep’s feta and almonds.

If you make it to Perth and do not make time to head to Fremantle you should hang your head. The food scene there is off the charts, so when a restaurant comes recommended by in-the-know locals you know it is good. Bread in Common, an expansive space with long communal tables and an open kitchen, is considered about everything it does, from its wood-fired, preservative-free bread to its pickling and fermenting and its menu of share plates and minimal-intervention wines.

David Thompson’s brand of spicy, flavour-engulfed Thai has made him internationally famous, and his Perth restaurant Long Chim (also tucked into the State Buildings) is a perennial hit with diners. The colourful space is bustling, noisy and aromatic and the menu is influenced by the market and street food of Bangkok, from mouth-warming curries to unctuous noodles to wok-fresh stir fries.

Part of the Ritz-Carlton Perth, Hearth’s lovely dining room is the backdrop for a menu that celebrates the produce and producers of the state, from the Kimberley to the fringes of the Great Southern region. 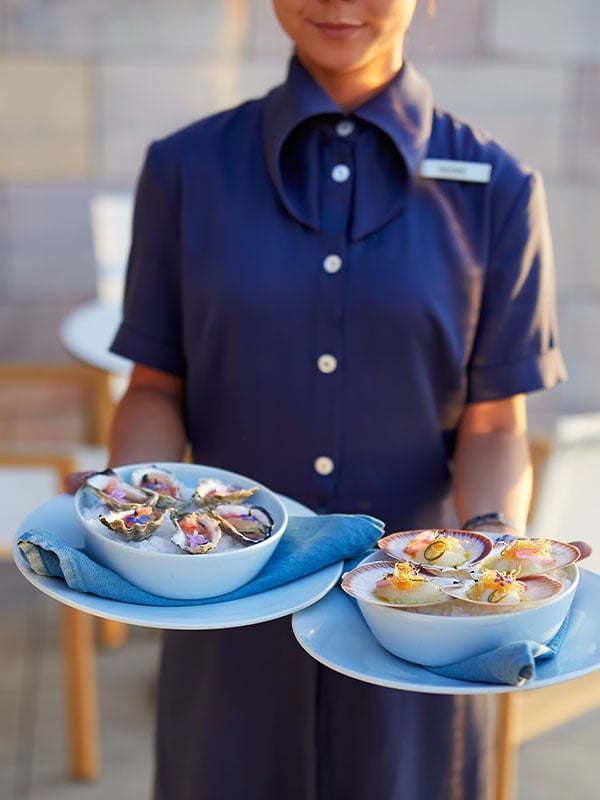 Celeb chef Guy Grossi has collaborated with The Westin Perth to create Garum, a Roman osteria combining ancient traditional Roman cooking techniques and modern classics. The space is as appetising as the menu of handmade pastas, housed as it is in the historic Hibernian Hall in the city’s east end.

Having opened next door to Old Young’s Distillery, this Swan Valley eatery has proven quite a hit, with chef Rohan Park’s menu of share plates getting big kudos, as has the fresh, contemporary fit-out and long outdoor table sitting pretty under a canopy of dripping vines. 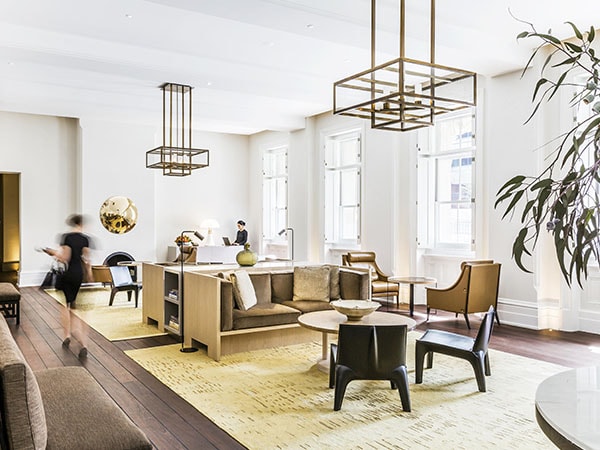 The light-filled lobby at COMO The Treasury.

The understated sophistication of this property has garnered it multiple awards and many fans over the years. Housed in grand heritage buildings, the interiors by Kerry Hill Architects have a soft, minimalist vibe, with the clean lines made welcoming by the use of tactile natural materials such as leather and blond wood and muted neutral shades. Don’t miss the opportunity to dine at its signature restaurant Wildflower while in residence. 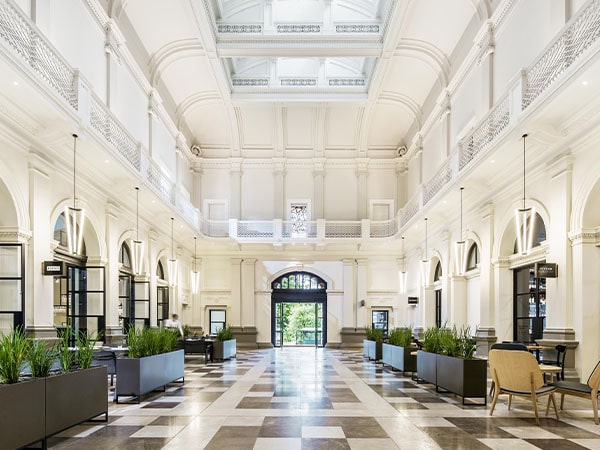 COMO The Treasury is all understated elegance.

The sleek design of The Westin, situated on Hay Street, also has a strong sense of place, with colours reminiscent of the WA landscape and arresting art that captures everything from the state’s swirling, Day-Glo-hued salt lakes to its startling blue waterways. Facilities include a Bodhi day spa, rooftop infinity pool and fitness studio.

Situated on Elizabeth Quay, the Ritz-Carlton Perth is a grand and stylish offering, with its 205 rooms flooded in light through floor-to-ceiling windows, a chic interior style with lots of natural materials at play and top-notch additions including Hearth restaurant at ground level, and the lovely Songbird bar, with its cosy fire pit and outdoor terrace, up high. Also pay attention to the art in the soaring lobby (rendered in 10,000 blocks of Kimberley stone), which tells local and state stories, including a wall piece created from ephemera (old china and the like) found during the construction process. 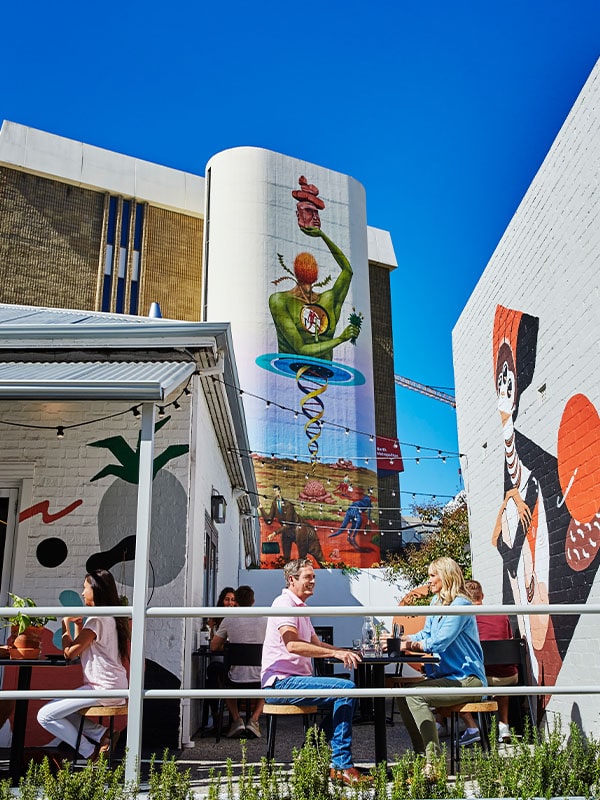 Perth’s original hip hood, the inner-city suburb of Northbridge has settled into its status as the go-to place for great coffee, interesting food and late-night drinks. The relaxed vibe on the street is fed by engaged locals, who shop in their favourite boutiques and eat out in local cafes and restaurants with pride. Don’t neglect to wander through dimly lit arcades and down laneways festooned with street art, as there are many hidden gems
to be discovered.

There’s much ado about Beaufort Street, Mount Lawley’s main thoroughfare, which has seen new hotspots popping up along its length including The Elford, Bar Rogue, and multi-level, multi-venue The Beaufort. A stone’s throw from the heart of the city, the neighbourhood is the perfect place to head on a Saturday morning for brunch and shopping,
or after dark when the area’s vibrant nightlife kicks into gear.

The UNESCO World Heritage-listed Fremantle Prison has a colourful and dramatic history, having been built by convict labour in the 1850s and housing prisoners for 136 years until it was shuttered in 1991. There are a range of tours with knowledgeable guides, including a spooky torchlight tour after dark and one into the labyrinth of tunnels located 20 metres below the prison. 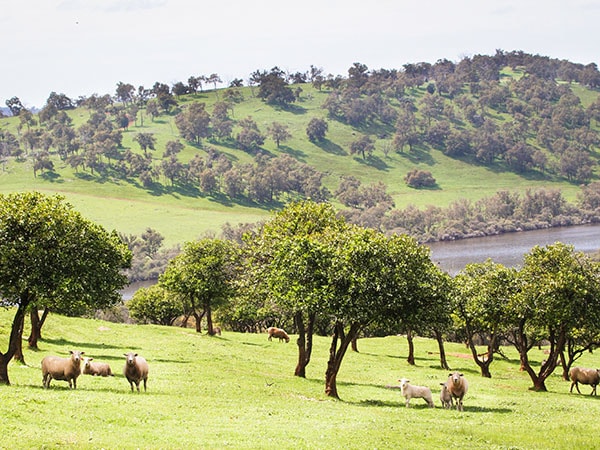 Named the most beautiful stadium in the world, Perth locals are rightfully proud of Optus Stadium, which is an attraction in its own right with tours and activities on offer that range from delving into the Indigenous history of the area to diving off its roof. theozone.com.au

Beloved by Perth’s inhabitants, Kings Park is a vast patch of nature sitting in the heart of the thriving city. At 400 hectares it is actually 60 hectares larger than New York’s Central Park, which also doesn’t have a botanic garden sitting within it (that’s Western Australian Botanic Garden) or a 750-year- old boab tree.

This Perth outer suburb is all about the spectacular allures of its coastline, which looks out to the islands and reefs of the Shoalwater Islands Marine Park. If the penguins on the aptly named Penguin Island aren’t enough to hook you, swimming with wild dolphins (at a respectful distance and with no actual contact please) from September to early June is sure to do it.

When people think of water views in Perth, it is usually the Swan River that springs to mind, but the WA capital actually boasts a total of 19 beaches. While the most famous of these is Cottesloe Beach, do pack your swimmers and head to Leighton Beach, Mettams Pool, Bathers Beach, and City Beach, near to the heart of Perth. 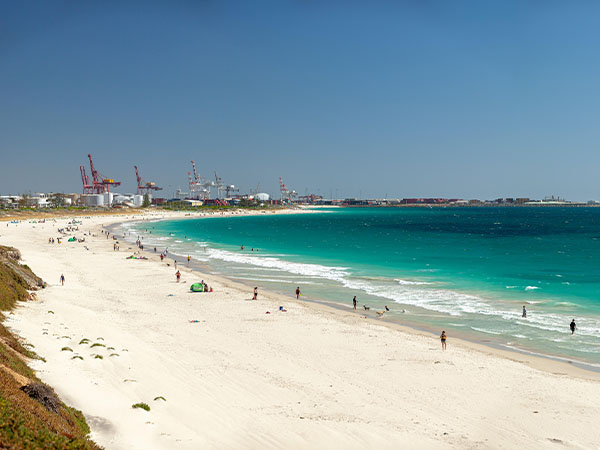 Go to the lovely Leighton Beach.

Clocking in at an easy 30-minute drive from the heart of the city, the Swan Valley is the ultimate weekender for Perth locals looking for respite within reach, but its delights sometimes slip under the radar when it comes to out-of-towners. Rookie mistake people. The area is a powerhouse of artisanal makers and doers producing everything from art to chocolates to gin. It is also the state’s oldest wine region, with more than 180 years of winemaking heritage and knowledge sown into its rich soils. And what would an easy-to-access weekend escape/day-trip foodie enclave be without a destination diner or two? Prioritise Mandoon Estate, Funk 2.0 and Stella Winery. 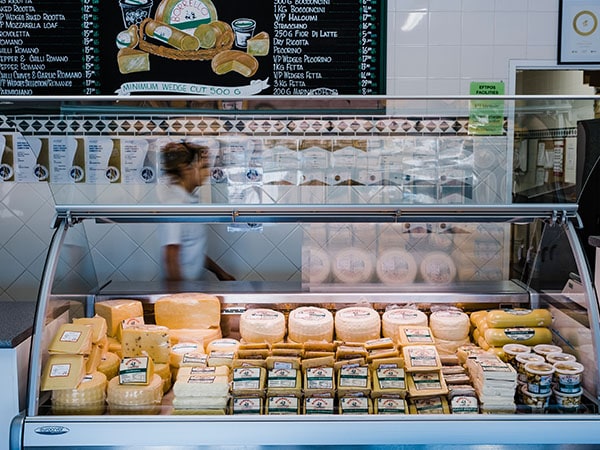 Bucolic doesn’t even begin to describe the Chittering Valley, with its idyllic rolling green countryside sprinkled with grazing cows and pretty wildflowers. Situated in the northern hills of the Darling Range, less than an hour’s drive from the city, the region boasts vineyards, orchards, farmers’ markets and Australia’s only monastic town, New Norcia, which is definitely worth the side trip.