8 Aboriginal sacred sites you must visit 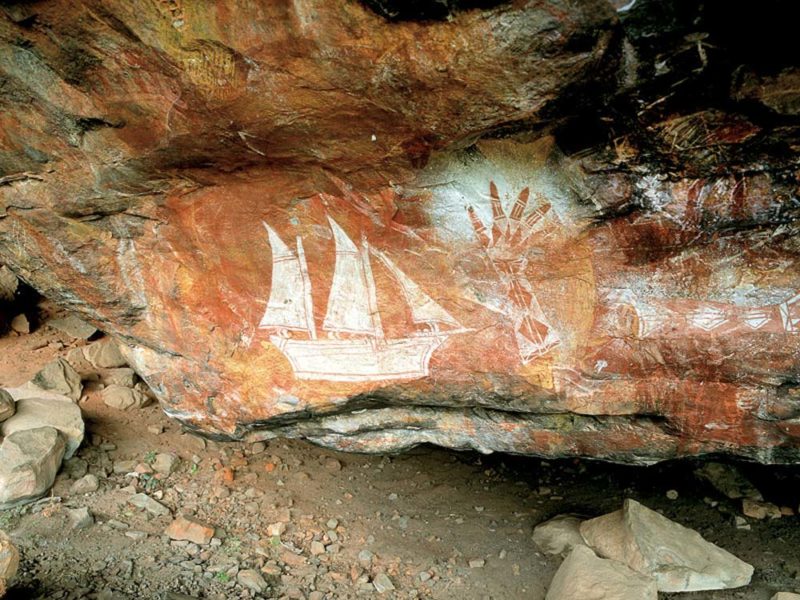 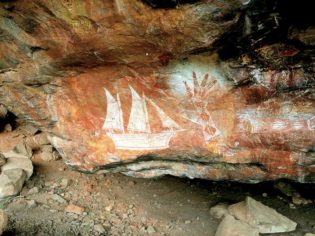 Aside from being an ancient continent, Australia is home to the oldest continuous living culture on Earth. Explore some of the outback’s more accessible Aboriginal sacred sites and rock art locations and learn to Dream along the way.

Exploring the outback, driving through it, walking about in it and camping beneath its field of stars, allows us to connect with the heart of Australia. However, there’s a different – and deeper – way to experience the outback: through the eyes of the First Australians.

Here are a few sites, some less accessible than others, but well worth going that extra mile, that offers outback adventurers, awe-inspiring views, fascinating rock formations and luscious valleys – all in the name of understanding Australia’s Indigenous heritage more fully. 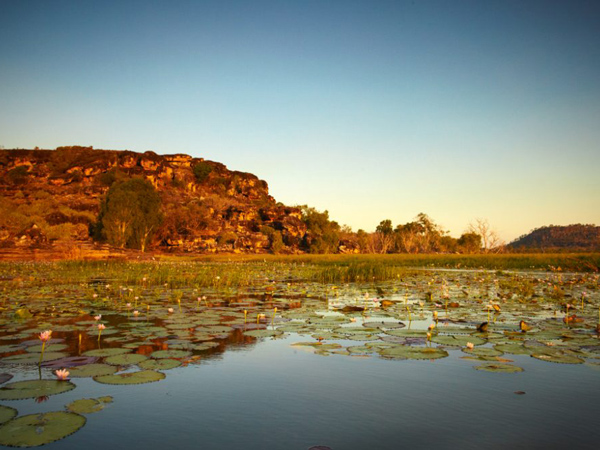 In the northwest corner of Arnhem Land, this national treasure depicts ancient human occupation dating back at least 55,000 years and allows you to become a student of pristine wilderness at the same time. The sacred area has ample fishing spots and crystal-clear, croc-free pools, as well as some of the most colourful and prolific rock art in the world – some of which even depicts the first contact between Aboriginal and European peoples, with sailing ships and rifles clearly recognisable.

Like Mount Borradaile, Ubirr, Nourlangie Rock and Injalak Hill in Kakadu feature breathtaking rock art that details ancient works of animals and tools, overlaid by more recent scenes of the first contact. They’re also home to excellent examples of “x-ray” paintings, as well as sacred creation beings like Ngalyod (the Rainbow Serpent), Namarrgon (the Lightning Man) and his wife, Barrginj. 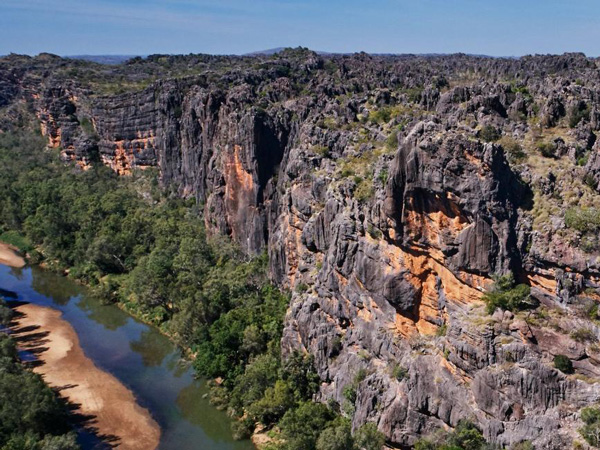 Next to Tunnel Creek National Park in the Kimberley, Windjana is a day trip from Derby or Fitzroy Crossing. Born from a 375 million-year-old Devonian reef system, the impressive Gorge was carved from the Napier Range by the Lennard River. Windjana’s walls rise to 100m in places, and its bed is more than 100m wide. In the wet season, caused in local Dreamtime legends by the spirit Wandjina (after whom the gorge is named), the river rages. In the dry, conditions are perfect for a little canoeing – and viewing of rock art in the Tunnel Creek cave system itself. The works in this part of the Kimberley tend to depict either Gwion Gwion (Bradshaw) figures or images of the Wandjina ancestral creation being.

The Eastern Macs (to the east of Alice Springs) is home to rock art sites sacred to the Arrernte in Emily Gap, Jesse Gap and Trephina and N’Dhala Gorges, while the Western Macs is home to the famous Larapinta Trail, as well as a myriad of other easily accessible highlights (Ormiston Gorge, Standley Chasm, Palm Valley etc). Of particular interest to the rock art-hounds are the Ochre Pits about 65km west of Alice, near Serpentine Gorge. Easy to access from the road, they were once an important source of paint and medicine.

And while you’re in the area, definitely consider a stay at the Gunya Titjikala community 120km south of Alice Springs for its deluxe tents, evening Dreamtime stories and valuable art collection. 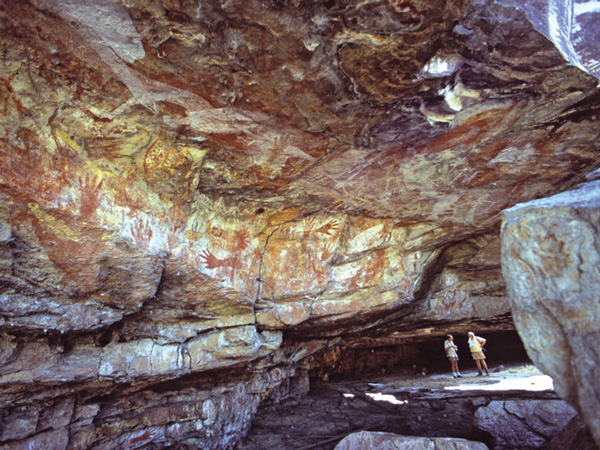 An important area for the Southern Arrernte of Central Australia, Rainbow Valley lies just under 100km south of Alice Springs and helps form the James Range. Its sandstone cliffs, shaped by water erosion, also hide countless petroglyphs (rock engravings), paintings, relics of stone tools and a large outcropping called “Ewerre”, which is of particular significance and is a registered sacred site.

Straddling the boundary of SA and the NT in the Musgrave Ranges, Cave Hill is in Anangu land and is the site of the Seven Sisters Tjukurpa creation story. Considered one of the most spectacular sites for rock art in Central Australia, the ceiling of the cave is covered in vibrant motifs that are to this day carefully and precisely retraced by traditional custodians to preserve their stories. The top of Cave Hill also provides excellent 360-degree views back to Uluru and distant Mt Connor. 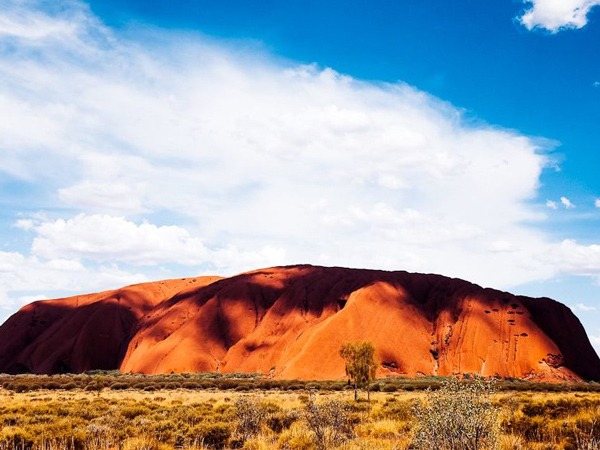 This one perhaps is one of our most sacred sites. Uluru is a massive sandstone rock located right in the middle of the Northern Territory’s Red Centre. It was believed to have started forming over 550 million years ago. The traditional owners of Uluru, the Anangu community have long since urged people to circumnavigate the rock on foot, rather than climb it due to its spiritual significance and for their own safety. It wasn’t until October 2019 that the climbing ban officially came into effect – and with good reason.

Just in case you are wondering, we have 5 reasons the Uluru climbing ban makes total sense and we also have 11 things to do at Uluru that aren’t climbing.

In general, there should be no physical contact with items at Aboriginal sites, sacred or otherwise. Find out exactly what you are and aren’t allowed to take pictures of, and make sure you get consent (and permits) from the appropriate tribe/community before touring their land. Do not take anything from the land, like plants or sand because this is very disrespectful.

But don’t let protocols intimidate you overly; if you adhere to them faithfully and respectfully, there’s no reason why you can’t have an enlightening journey through the ancient outback.

For more information on any of these Aboriginal sacred sites, Travel NT and Australia’s North West.

If you want to explore more Outback holidays, head here for all you need to know.