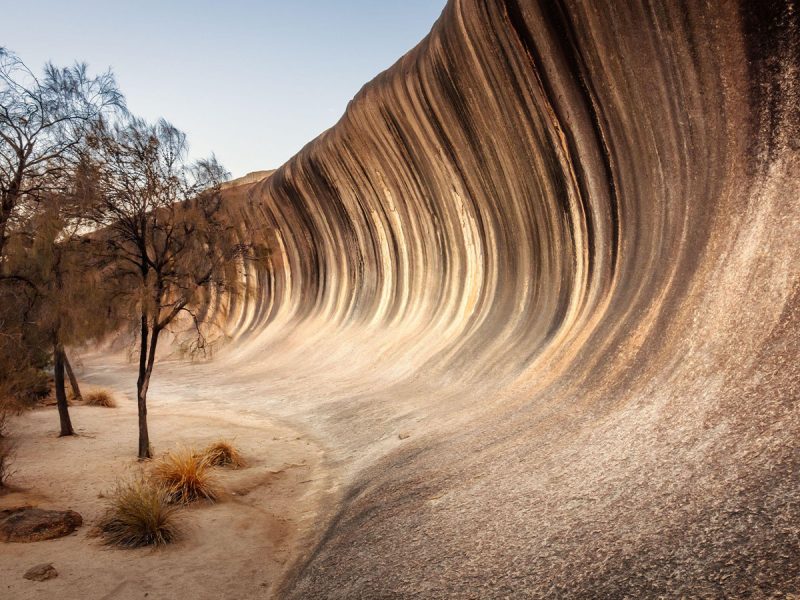 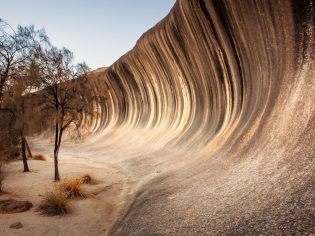 Flip through WA’s look book and you’ll find everything from beautiful beaches to soaring sand dunes and some of the most dramatic rock formations in Australia. Here are 10 iconic wonders you need to see.

Wave Rock is a granite inselberg that has been weathered by wind and water over an estimated 2.7 billion years. Located near the Wheatbelt town of Hyden, the landform looks like a sepia-toned still from The Big Wave Project II produced by ocean cinematographer Tim Bonython. Follow the Pathways to Wave Rock self-drive trail to see the forces of erosion that have sculpted the 15-metre high granite formation, which lies 340 kilometres southeast of Perth.

Visitors snap selfies in the barrel of the giant wave that has brush strokes of ochre, yellow, brown and grey feathered into the sandstone, adding to the illusion of it moving like water. While there, check out other interesting formations within Wave Rock Reserve such as King Rocks, the Hippo’s Yawn and Mulka’s Cave, where you’ll find examples of ancient rock art. 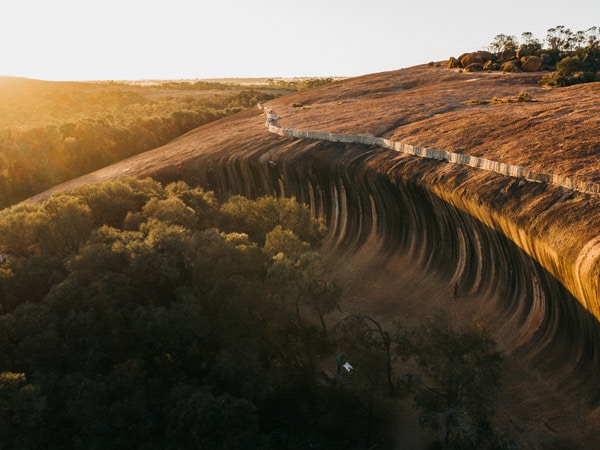 Wave Rock is a granite inselberg that has been weathered by wind and water over an estimated 2.7 billion years. (Image: Tourism Western Australia)

The seas around Ningaloo Reef are so blue and so clear you will feel like you’re floating through space when you’re swimming here. Of course, most visitors come here to catapult into the waters to swim with whale sharks between March and July each year. But the world’s largest fringing reef system is also a destination in its own right and one lesser-known fact is that you can also swim with humpback whales between August and October each year.

Stretching in an azure-fringed ribbon some 300 kilometres from Carnarvon’s Red Bluff to the Muiron Islands, Ningaloo Reef was declared a UNESCO World Heritage Area site in 2011, a listing that loops in Ningaloo Marine Park as well as Cape Range National Park. Meaning ‘promontory’ or ‘deep water’ in the language of the Baiyungu, the name Ningaloo takes on new meaning when snorkelling through the coral gardens in an aquarium of colourful fish as the continental shelf comes closer to dry land than at any other point on the mainland. Don’t worry about buying postcards, you’re pretty much in one. 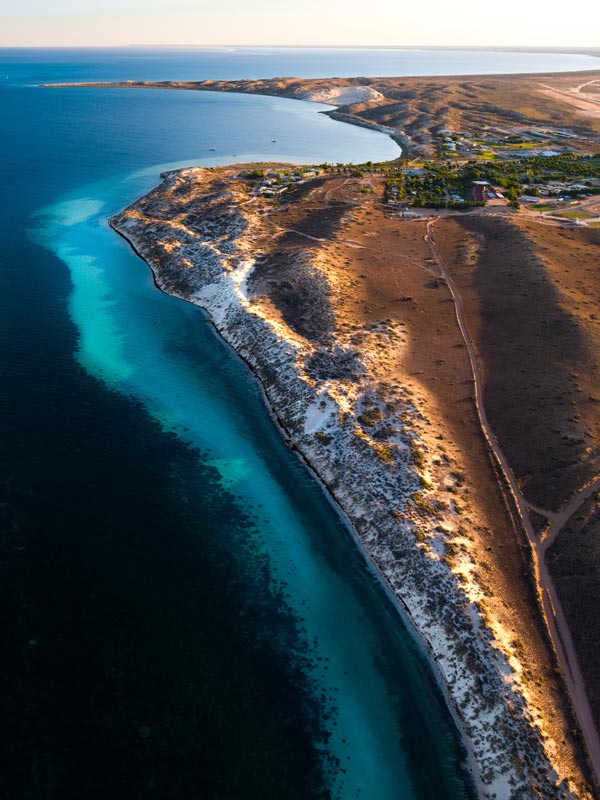 The world’s largest fringing reef system is also a destination in its own right. (Image: Tourism Western Australia)

The Horizontal Falls are formed by fast-moving tidal currents that thunder, tumble and rage through two narrow gorges of the McLarty Range in Talbot Bay, in the Buccaneer Archipelago. There are no roads to this section of the coastline so most visitors see this wonder from the air via seaplane, or for a best-of-both-world’s experience, Horizontal Falls Seaplane Adventures allows you to see them from both the air and the water. When luck is on your side there are whale-spotting opportunities in winter, which just adds to the thrill of soaring over this section of the Kimberley coastline.

Described by Sir David Attenborough as ‘one of the greatest natural wonders of the world’, the phenomenon occurs as torrents of water are sucked through a narrow gap between the gorges, creating a variation in sea level of up to about four metres. During an extreme high tide, about one million litres of water funnels through the two towering cliffs every second, creating currents that appear to pull the large volume of water sideways. 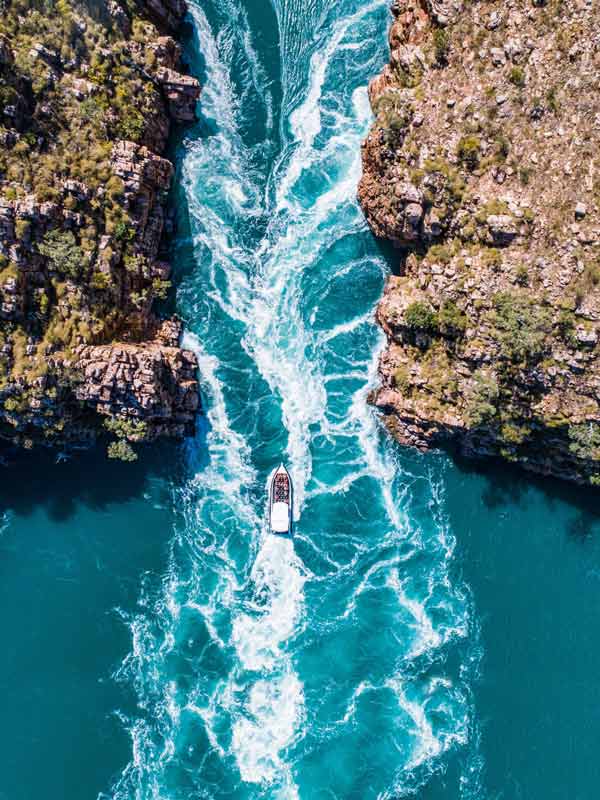 For a best-of-both-world’s experience, Horizontal Falls Seaplane Adventures allows you to see this icon both from the air and the water. (Image: Tourism Western Australia)

The crumpled, ancient terrain of the Kimberley region in the most northern part of Western Australia is home to more than 100,000 pieces of Aboriginal rock art that date from the Palaeolithic to the modern era.

The images have been painted, engraved, sculpted and even moulded out of blobs of beeswax and spinifex resin in shades of ochre, sienna and rust in the sprawling gallery that covers an area of about 423,500 square kilometres. For context, that’s almost twice the size of the UK, making it one of the largest cultural landscapes on the planet. 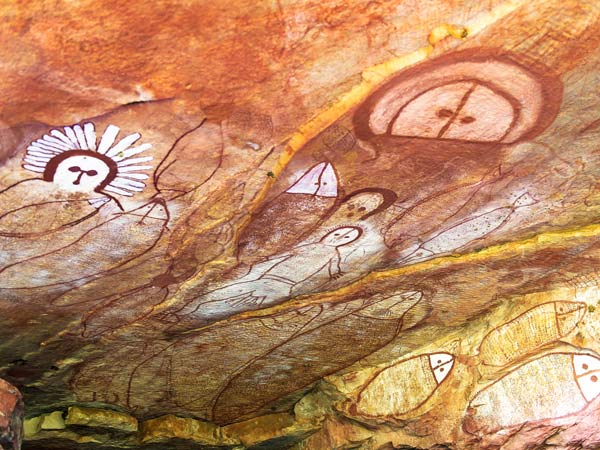 The images have been painted, engraved, sculpted and even moulded out of blobs of beeswax and spinifex resin in shades of ochre, sienna and rust. (Image: Garry Norris Photography)

The rock art sites are sacred to the Traditional Owners of the Kimberley whose ancestors carried out ceremonies in the caves. Visitors to the area can take a self-guided tour of the significant rock art sites along the Kimberley coastline, from the Mitchell Plateau to Kimberley Coast and Gibb River Road, but the best way to see the art sites is on a tour with a cultural guide from the Worrorra language group who can explain the significance of the many images and motifs.

Jilinya Adventures’ Rock Art by Air helicopter tour dips and dives around the dramatic sandstone scarps to access hidden caves where you’ll learn the ways of the Wandjina (Rainmaker Creation Spirit) that is depicted in caves all over the Kimberley. 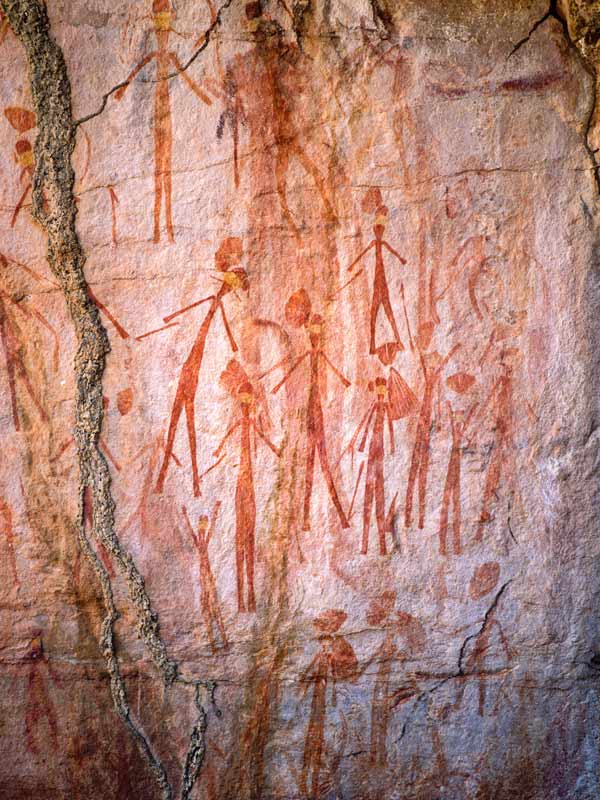 The rock art sites are sacred to the Traditional Owners of the Kimberley. (Image: Garry Norris Photography)

You can’t get more Australian than seeing kangaroos bouncing over a sugar-white sandy beach edged by dunes carpeted in wildflowers, which is one of the reasons Lucky Bay regularly ranks in lists of Australia’s best beaches. While the beach is renowned for its encounters with mobs of kangaroos, who appear to flutter their eyelashes at the mere hint of a photo op, it is equally popular for snorkelling in the crystalline waters and sprawling out under the sun doing not much of anything.

Located 45 minutes from Esperance in Cape Le Grand National Park, the area is rich in Indigenous history and brimming with wildlife; if you’re visiting between July and October there’s a high chance you’ll see migrating whales. During the day you can swim, fish, surf, while at night Lucky Bay Campground invites stargazing as you camp out under an ancient canopy of planets and stars. 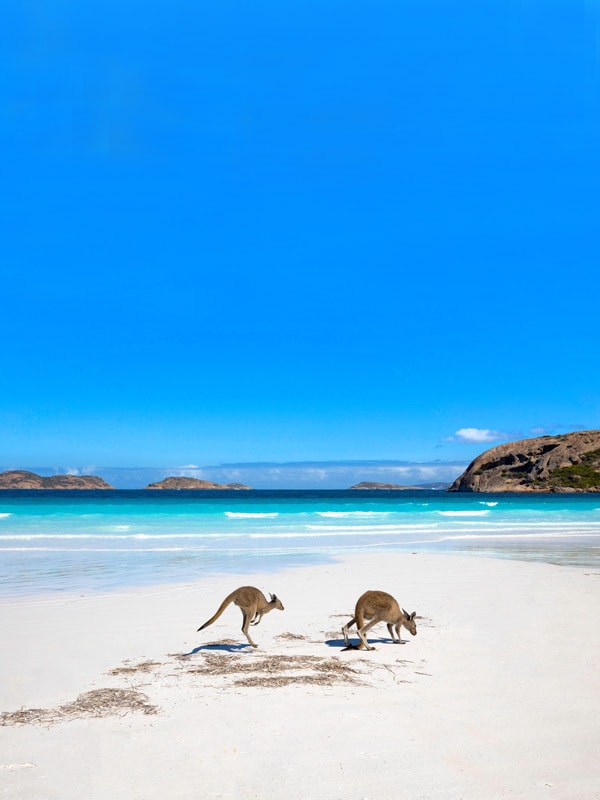 6. Staircase to the Moon

Time your visit to Broome to coincide with a full moon between the months of March and October and there’s a good chance you will witness the natural phenomenon that is the so-called Staircase to the Moon, when the Earth’s natural satellite lights up the corrugated tidal flats of Roebuck Bay. The lunar light show occurs during a low tide when the ridged flats transform into a dramatic golden staircase that looks like it is ascending to the heavens.

This stunning setting is an unofficial meeting place for locals who come as much to browse the stalls at the night markets (held on the first night of each full moon) as they do to wax rhapsodic about the night sky, pin-cushioned with stars. You can sample food that speaks to the multicultural heritage of the area, and buy souvenirs that range from candles to confectionery.

You can also see the Staircase to the Moon at Onslow, Cape Keraudren and Dampier Peninsula, Cossack, Point Samson and Port Hedland. 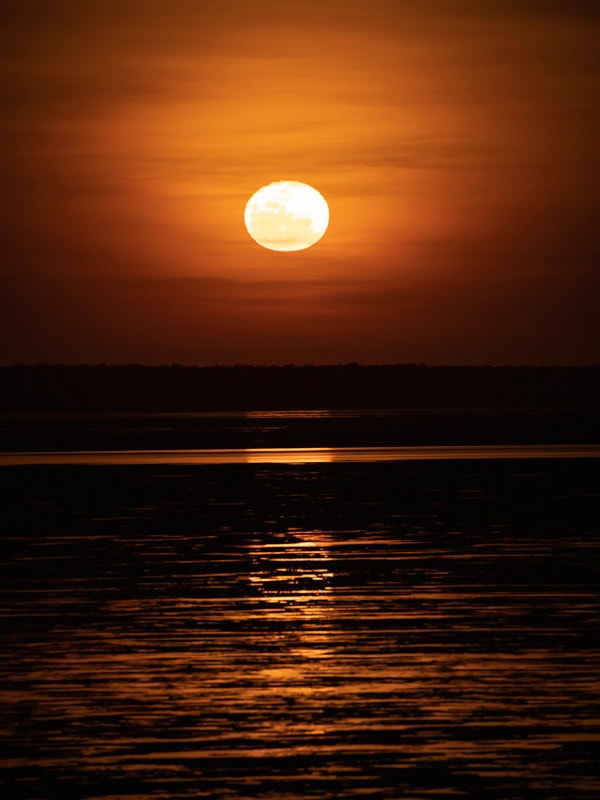 Time your visit to Broome to coincide with a full moon. (Image: Tourism Western Australia)

Local intel has it that you’re almost guaranteed a sighting of orcas at Bremer Bay Canyon over summer. According to Naturaliste Charters’ marine biologist Pia Markovic, more than 150 orcas and other apex predators gather off the coast of the township of Bremer Bay between January and April each year to feast on squid and pelagic fish. It is, says Markovic, “the largest known aggregation of orcas in the Southern Hemisphere”.

Bremer Bay is about a two-hour drive from Albany and the list of species you might encounter off the continental shelf, some 45 kilometres from the harbour, also includes sunfish, beaked whales, oceanic dolphin species, great white and hammerhead sharks, albatross and sperm whales. One of the best ways to observe orcas hunting in stealth mode, breaching and socialising, spy-hopping or slapping the surface of the water with their dorsal fins is by boarding Naturaliste Charters’ 20-metre catamaran, Alison Maree, to Bremer Point, one of the least-explored places on the planet. 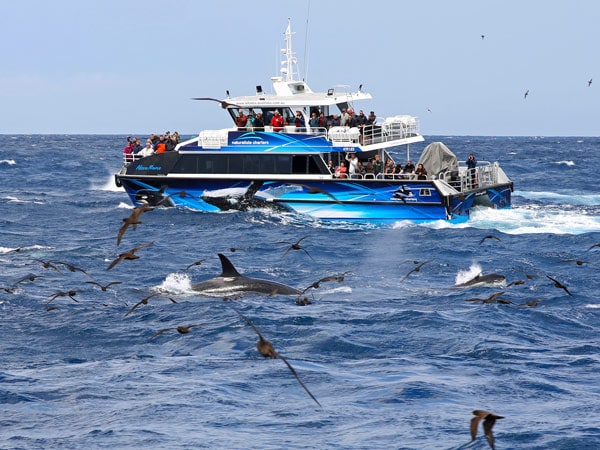 More than 150 orcas and other apex predators gather off the coast of the township of Bremer Bay between January and April each year.

The labyrinthine network of tunnels, caves, and caverns in the Margaret River Region are estimated to be about one million years old and are one of Australia’s true lesser-known treasures.

Self-guided tours nudge visitors deep inside these gothic cathedrals, which have jagged stalagmites jutting upward from the cave floors and crystallised stalactites dripping down from the ceilings. You can also enter the caves like an action hero via an abseiling rope or tour the twisted tunnelways with a guide. Some of the real gems of the cave system include the giant stalactites in Jewel Cave, the ancient fossils in the aptly named Mammoth Cave and the passageway dubbed the Tunnel of Doom that you can crawl through at Ngilgi Cave.

Lake Cave is one of around 100 limestone caves that lie beneath the surface of the Leeuwin-Naturaliste Ridge and is, like one of Gaudi’s works of art, both strange, beautiful and grotesque. See the ‘Suspended Table’ reflected in the ‘lake’ like a crystal chandelier in this haunting hall of mirrors that reflects the misshapen pillars and melting walls of the chamber; the soundtrack of drips reminds visitors this is still a work in progress. 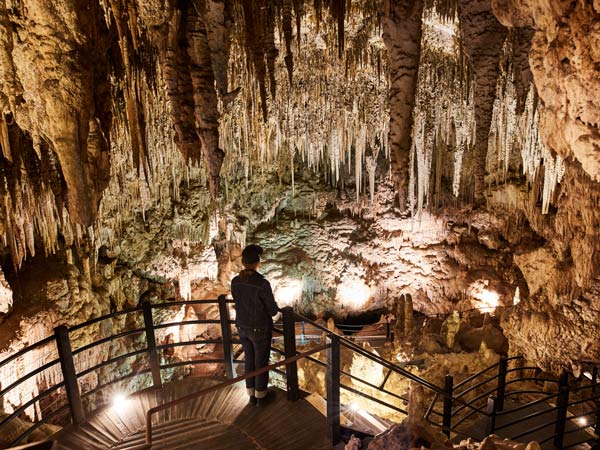 The labyrinthine network of tunnels, caves, and caverns in the Margaret River Region are estimated to be about one million years old. (Image: Tourism Western Australia)

The Pinnacles are stunning other-worldly structures that, according to WA’s Parks and Wildlife Service formed about 30,000 years ago when the sea receded and left deposits of seashells.

The landscape here is like an open-air museum, an archaeological wonderland studded with thousands of limestone pillars on the golden sands of the Pinnacles Desert, just south of Cervantes and about 200 kilometres north of Perth.

Visit this wild and beautiful location in Nambung National Park as the sun is setting and watch as the Pinnacles are painted pink, then gold, then as navy as the night. In the stillness, the columns resemble the remains of an ancient temple complex. In fact, when the Dutch explored this chunk of WA in 1650 they thought the craggy spires were the ruins of a lost city.

‘Nambung’ is said to mean ‘crooked’ in the language of the Noongar peoples, the Traditional Owners of the land, and is a possible reference to the seasonal river that twists around the formations that spike out of the shifting yellow sands like giant shards of honeycomb. 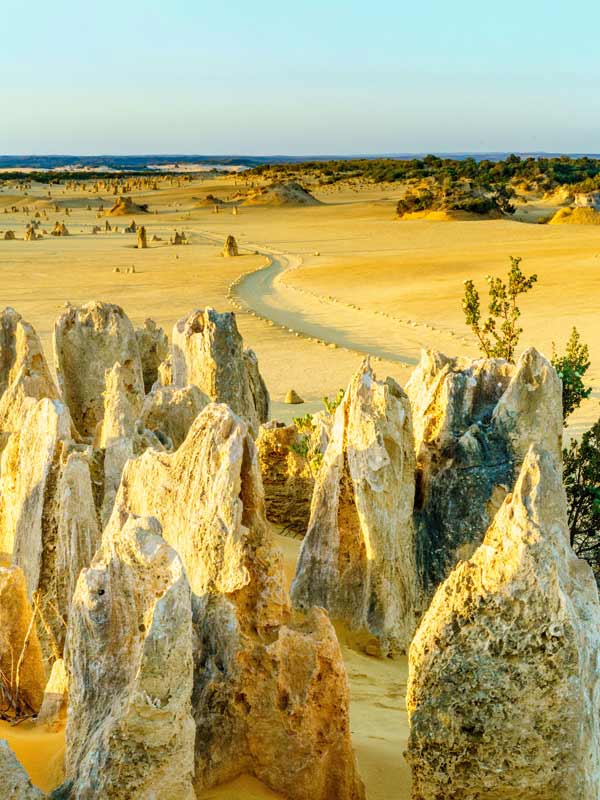 Located within Purnululu National Park in the rugged Kimberley region, the quizzical Bungle Bungle Range is like an oversized children’s stacking puzzle rendered in rock. The orange and black beehive-like mounds, formed over 20 million years, rise and fall in hypnotic, undulating patterns across 450 square kilometres. As might be expected from such a wondrous anomaly, there is much to explore, discover and appreciate, all of which can be done by foot on a tour of its nooks and crannies, or from the air on a (seriously) scenic flight. 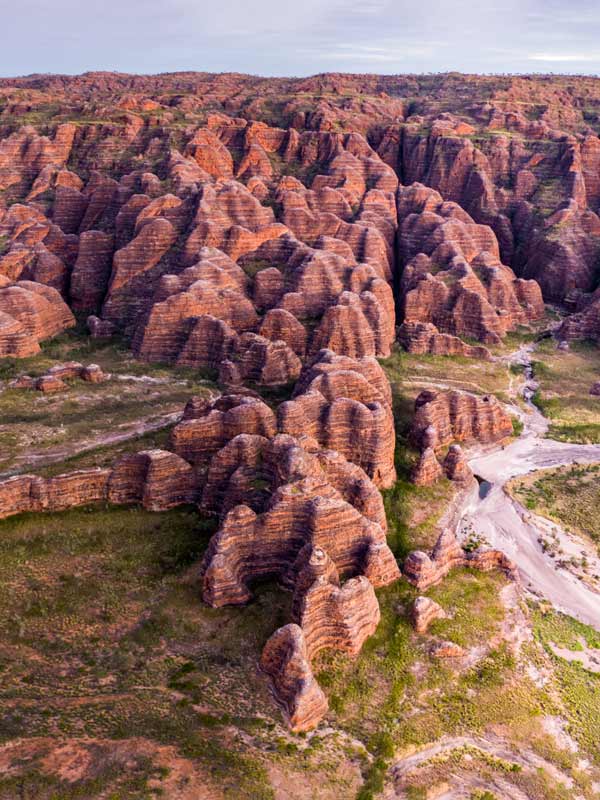