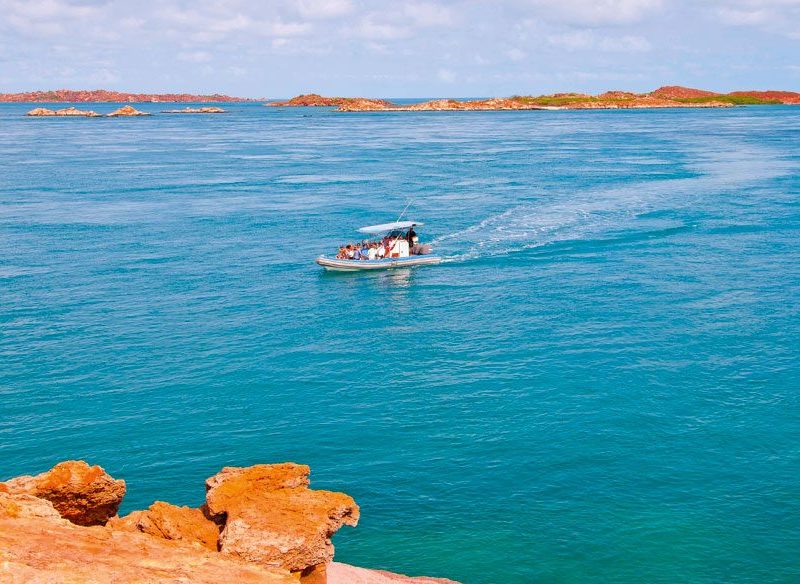 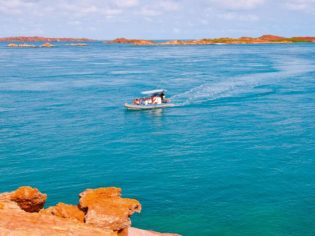 Fleur Bainger was on a regular holiday in Broome when she heard about the ocean tides that flood the landscape on a six-hour circuit. So she signed up for a fly-in visit. But watching them from the air is one thing – getting sucked into a whirlpool is quite another

Looking intently through my camera lens, I try desperately to harness the scene before me. Millions of litres of seawater scream past at breakneck speed, gliding effortlessly over 1.8 billion-year-old rock formations as only liquid can, then bubbling up as though boiling from the earth’s core.

My happy snapping is, of course, futile. One madly clicking finger is no match for these black belt rapids, which refuse to be captured in a freeze frame.

These are the waters of WA’s Dampier Peninsula, which pour in and out of King Sound via the Buccaneer Archipelago every six hours; their strength ebbing and flowing with the waning moon. Tides in these parts rise and fall by up to a whopping 12 metres – roughly the height of a three-storey building – claiming more than one unsuspecting tourist’s beach-combing car each year with its silent stealth up the shore.

For our skipper, James Brown (nope, no relation), who grew up 200 kilometres north of Broome, it’s a normal part of life but for anyone else, witnessing the world’s largest tropical tides as they tear through a confetti of islands is quite a sight.

A view from above the Horizontal Waterfalls in the Kimberley.

“It’s like a giant tsunami, but it comes and goes in a matter of hours, not a matter of minutes,” he says. “The water squeezes through these channels; the islands act like a sieve. That’s what has given rise to these huge tidal strips.”

James knows the tricks of the turbid waters better than most. He’s a third-generation pearl farmer who spent his childhood spearing mullet in the shallows with his Aboriginal mates, and jumping on pearl luggers with his dad to explore King Sound. Together, they’d venture into waters that remain unchartered even now, littered as they are with ship shredding rocks. Now an adult with two sons of his own, the rush James gets from witnessing the tides up close hasn’t waned one bit.

“We’re doing 20 knots and we’re not moving,” James yells above the high pitch of the labouring boat engine. Our vessel, aptly named ‘Cyclone’, is churning against the oncoming current, yet remaining stationary until James pushes the throttle higher and we bunny hop over a wall of water. It’s a standing wave, he says, created by water ploughing over submerged boulders, and one day he plans to kite surf this one. For now it’s a daredevil pipedream, but there’s conviction in those kingfisher-blue eyes.

The rocky islands themselves bear tell-tale stains of the dramatic tidal movements. Banded with ochre, white and charcoal grey, a wide, dark rim shows where the water line comes up to, leaving only weathered orange tips peaking out of the ocean when the tide is high. As the tide sucks out, metres of grey emerge from the turquoise ocean.

Suddenly I realise Cyclone is caught in a whirlpool, its bow drawing a slow circle while the rear seems almost anchored to the spot, granting us a revolving restaurant view of the surrounding islands. Tales of turn-of-the-century pearling boats being sucked down giant drainpipes, helplessly disappearing with their crew, had me anticipating a heart-in-mouth experience, but this isn’t so dramatic: one could almost find themselves forgetting to hold on, if they tried. Almost. James assures me the seas get much wilder further out, but these are places he wouldn’t dare go in this small aluminium runabout with inflatable sides and two beefy outboards.

As we continue to skate the tides, James points out a white beach lined with mangroves. It’s Sunday Island, where his pioneering grandfather lived for 15 years, sheltered by a paperbark hut. Dean Brown kicked off the family’s pearling pursuits in 1946, when mother-of-pearl shell was sold for shiny pearl buttons. James’ uncle later joined him, working out how to culture pinctada maxima shells so they would produce perfectly spherical pearls – the first non-Japanese to do so. James’ mother and father then arrived to help out, and when their son was born 34 years ago, the Brown clan was still the only non-Aboriginal family on the peninsula.

“We didn’t have any real forms of communication, there was no telephone, we didn’t have 24-hour power, we didn’t even have accessible roads,” James remembers. A trip in to Broome, which now takes two and a half hours via a well maintained dirt road, would last for the better part of a day. “It would take hours and hours to slowly zig zag around the trees, bump over the humps and get bogged in the soft sand, like any bush track,” he says, with a disarming grin.

Aside from those rare and arduous journeys, James didn’t leave his family’s remote property until he was 12, sent to a Perth boarding school more than 2500km south. “To be honest, I thought everybody lived like we did. It wasn’t until I went away that I started to realise that wasn’t the case. In hindsight, it very much was a Swiss family Robinson experience.”

Today, Cygnet Bay is Australia’s oldest operating pearl farm. James never intended to end up running it but a short stint helping out his parents revealed that he and his marine biology degree were actually rather well suited to the job. “I started labouring and I never really left,” he says. “I was a diver for years. I worked on the boats and trained as a technician, and before you know it I’d done my apprenticeship and was running the company.”

Over the past three years, he has opened the farm up to curious visitors. He gets a kick out of showing them his world, so different from the glittering jewellery stores that sell his gems, yet comparably well-endowed with riches.

The region’s immense tides are, of course, what feed vital nutrients and minerals to the coral, fish, and James’ pearl-bearing oysters, so naturally he holds as much respect for their benevolence as he does their power. They delivered him the world’s largest round South Sea pearl, after all, measuring 22.24mm in diameter and oozing lustre. They also make a fascinating and beguiling subject for the scientists and researchers doing stints at the Kimberley Research Station that James started in 2009. “The tides are the heartbeat of The Kimberley. Everything here revolves around them,” he says.

Indeed, just an hour or so earlier I’d been coasting above the tide-carved landscape in a Cessna 210, looking down at the spaghetti squiggles and meandering veins created by retreating waters as I made my way to Cygnet Bay.

The flight gives a handy overview of the Dampier Peninsula’s burnt orange base and the cobalt blue overlay of the Buccaneer Archipelago.

Dropping altitude, we circled the frequently bucket-listed Horizontal Falls numerous times, our moustachioed pilot Yohan tilting the wings left and right so his seven passengers could each rack up a quality ogle. We unashamedly oohed and ahhhed at the water gushing through the twin, parallel gaps in the ancient ranges, creating streams of white water that was spectacular from above, but incomparable to all but touching it from James’ speedy boat.

All too soon, though, we’re farewelling James and flying on to Cape Leveque, the red-cliffed tip of the Dampier Peninsula. Its contrasting pale, sandy beaches are lapped by the tides twice daily, but there’s no froth and bubble to warn you it’s happening here. Paddle in shallow waters for half an hour and you’ll barely notice the ocean disappearing around you.

In an effort to stay submerged, I lie down on the sandy bottom, propped up by my elbows with just my head and shoulders above the waterline. But in no time the blanket of water slips away, leaving not even enough liquid to float in. The walk back to the dry section of the beach is astonishingly long; I’d followed the tide out without realising.

Settling in to the Cessna for our return flight to Broome, we comb the peninsula’s western coastline, spotting small indigenous communities, shallow lagoons, silted creek beds and empty beaches. With barely a soul watching, the tide is again sucking out, continuing a cycle as rhythmic as breathing.

When to go
The Giant Tides tour runs year round, but you’re best off going two or three days after the full moon or the new moon. Thrill seekers should time their visit for the October equinox for the most extreme experience.

How to do it
The Giant Tides full-day tour costs $695pp and includes pick up and drop off from your accommodation. Book and check the tides through the Broome Visitor Centre. 08 9195 2200; broomevisitorcentre.com.au

Where to stay
There are loads of accommodation options in Broome, at varying price points. You can choose to either stay in town or at Cable Beach, about 15 minutes out of town. We love…

Where to eat
Food in Broome can be rather pricey and the quality doesn’t always match the asking price.

Catch a glimpse
If you want to see the tides, search for ‘Giant Tides tour at Cygnet Bay Pearl Farm’ on YouTube and watch the clip.

Where is it? North-east of Broome, off Dampier Peninsula How to see it for yourself? To get an aerial view of the “falls”, tak...

Where is it? 260km offshore, west of Broome, WA. We have some magnificent snorkelling sites and reef dives, but this little-known Marine Park is on...