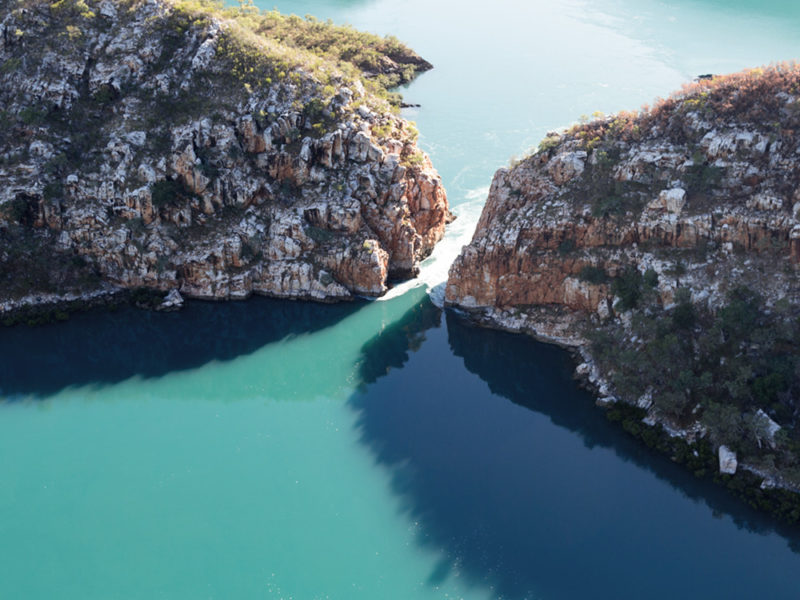 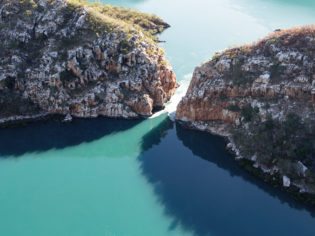 The Kimberley’s outback beach town of Broome is brimming with natural beauty, adventure and super-cute snubfin dolphins. Here are 10 experiences not to miss while you’re there.

A long, long time ago dinosaurs roamed in and around Broome. To delight your inner palaeontologist head to Gantheaume Point and learn about the various dinosaur species that once stomped around these parts. If you want to raise the level of adrenaline, Broome Hovercraft offers a hair-raising ‘scenic and prehistoric’ tour. Hold onto your camera while you zoom across the bay to discover perfectly preserved dinosaur tracks. 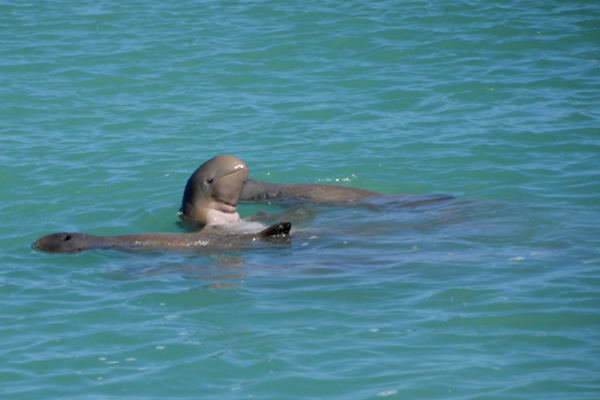 3. Watch the Moon build a staircase

Come sunset, the best free show in town is the Staircase to the Moon, which happens several times throughout the year. It occurs when a full moon rises over the mudflats of Roebuck Bay at low tide and looks like a huge stairway rising up to meet an enormous blood-orange moon. One of the best possies in town to watch the Staircase to the Moon is from the lush outdoor bar at the Mangrove Hotel. Grab a drink, order some delish food, and let the moon entertain you. 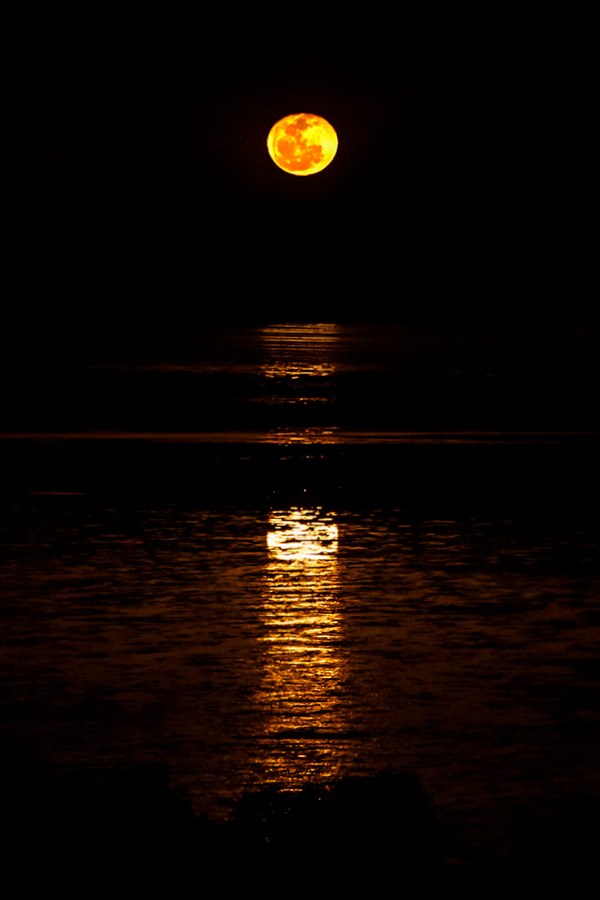 Watch the Staircase to the Moon at sunset. 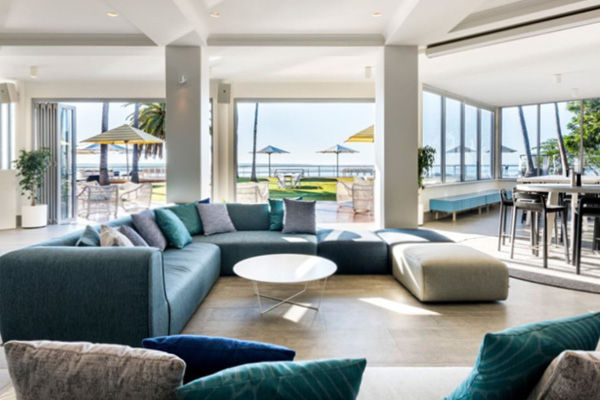 Watch the sunset at the Mangrove Hotel.

Australia is home to several outdoor movie theatres, but none provide as majestic an experience as Sun Pictures. From your deck chair at the world’s oldest operating picture garden you not only get to view the latest blockbuster but also the evening plane coming into land at Broome’s airport. Housed in an atmospheric old corrugated iron building, it might be hard to remember to watch the flick with a thousand twinkling stars above. 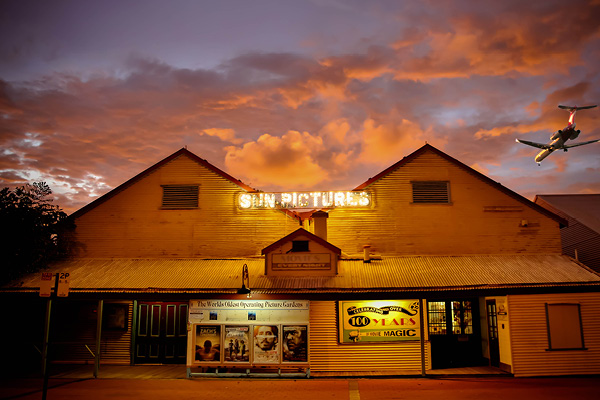 Watch a movie in the great outdoors at Sun Pictures in Broome. 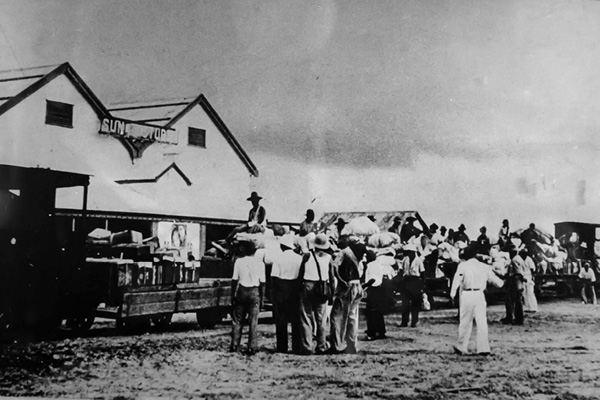 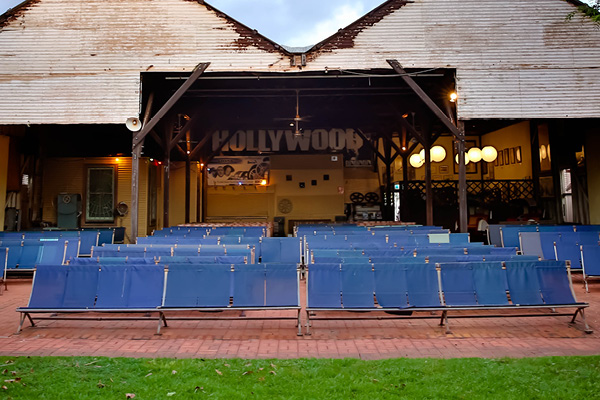 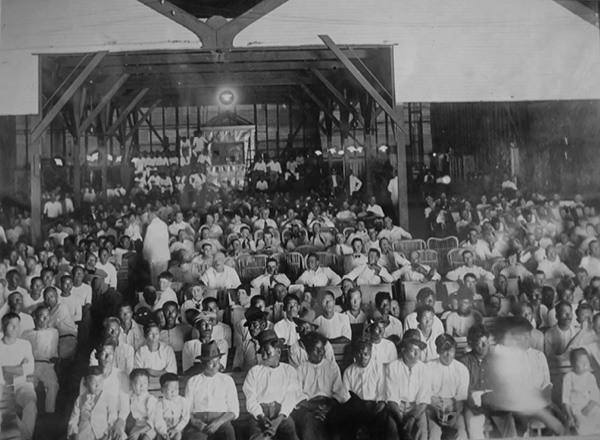 A look back at movie-goers enjoying a film at Sun Pictures.

5. Meet me at Cable Beach

This 22-kilometre stretch of white sand and clear water is a magnificent sight during the day, but nothing captures the essence of Broome like watching the sunset melt into the water from atop a camel at Cable Beach. These huge sandy-hued creatures stride alongside the soft waters like giant leggy models. But be careful where you point the camera – the same 100 metres of beach where you can camel ride is also the ‘clothing optional’ section of Cable Beach. 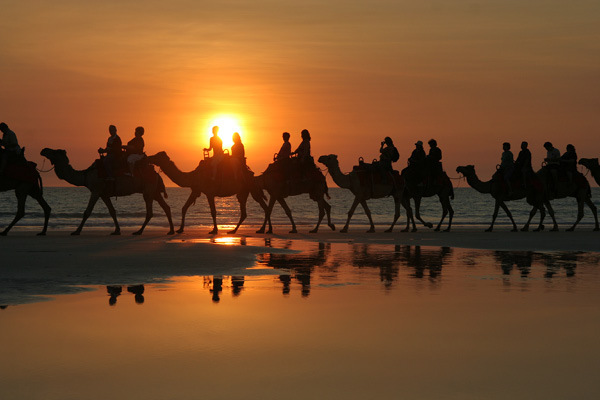 Ride a camel at Cable Beach. 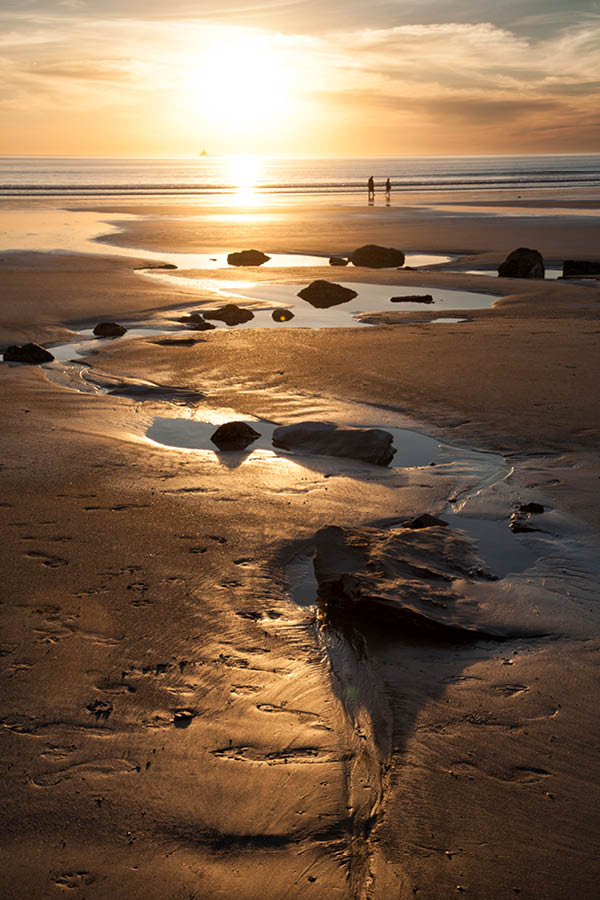 6. Immerse yourself in local Aboriginal culture

Narlijia Experiences was founded by Bart Pigram in 2015 and offers a range of experiences, including a fascinating deep dive into the traditional saltwater lives of Broome’s first people, the Yawuru. For those who like to learn while relaxing on a luxury catamaran, Narlijia’s cruise of Roebuck Bay will tick all the boxes. “Part of our culture is to share the beauty and cultural value of our homelands,” says Pigram. “To do this while spotting dugongs and tasting traditional bush foods makes it an especially enjoyable experience.”

7. Visit a working pearl farm (and buy one or two)

While the industry has changed enormously over the years, Broome is still a pearling town. These days it’s all about the Australian South Sea cultured pearl and there are several places to learn learn about this multi-million-dollar industry.

Think 72-foot catamaran, pearlini cocktails, pearl meat tasters and a ‘luggers lunch’. The Paspaley farm floats in Roebuck Bay, 3km from Broome’s Town Beach foreshore, making for a relaxed sail to see the pearl farmers hard at work. The guided tours are run on demand, with registrations taken for the limited experiences.

Three generations of the Brown family have overseen this remote outpost on the Dampier Peninsula, two hours’ drive from Broome. Their huge pinctada maxima pearls are fed by minerals carried in by the Kimberley’s immense tropical tides, resulting in anomalies such as the world’s largest, fine-quality round pearl, and a single shell that produced 10 pearls at once. Hear about the challenges of seeding oysters, see a pearl harvested up close and learn what it’s like to live in this piece of paradise. Tours can be on foot or on water; many include an Aboriginal guide.

A dazzling scenic chopper ride, or a 38-kilometre dirt track drive from Broome, this farm brings cultured pearl beds in from the open ocean to rest in sky-blue estuaries. Jump aboard a tour boat to see a pearl plucked from a live oyster, learn about the intricate art of pearl seeding and be tempted by the on-site jewellery store. 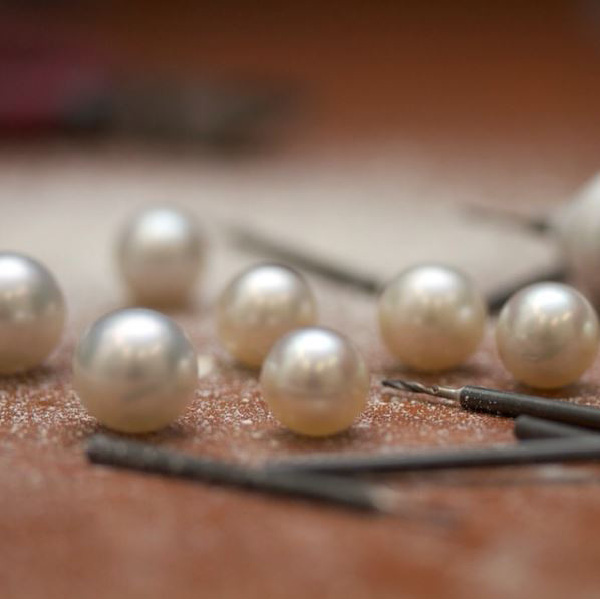 The Courthouse Markets have been a fixture of Broome for more than 25 years, operating on Saturdays (all year) and Sundays (April to October). The stalls are a fun mix of food, local photography, handmade clothing and jewellery. On Thursdays (June to September) there are night markets at Town Beach, where you can fill up on superb fried dumplings, zingy fajitas, fresh mango ice-cream and a Kimberley Coffee Company coffee. Yum. A tip? You can often nab a discounted whale watching or scenic flight trip by booking at the respective stalls at the weekend market.

Broome sits beneath some of the best stargazing skies on the planet. If you’re an astronomy lover you’ll dig Astro Tours, run by Greg Quicke aka Space Gandalf. White-bearded Quicke got his nickname after appearing in ABC’s Stargazing Live. The two-hour mind-bending adventure takes place in a beautiful bush setting next door to the Malcolm Douglas Crocodile Park (also a must-do in Broome). 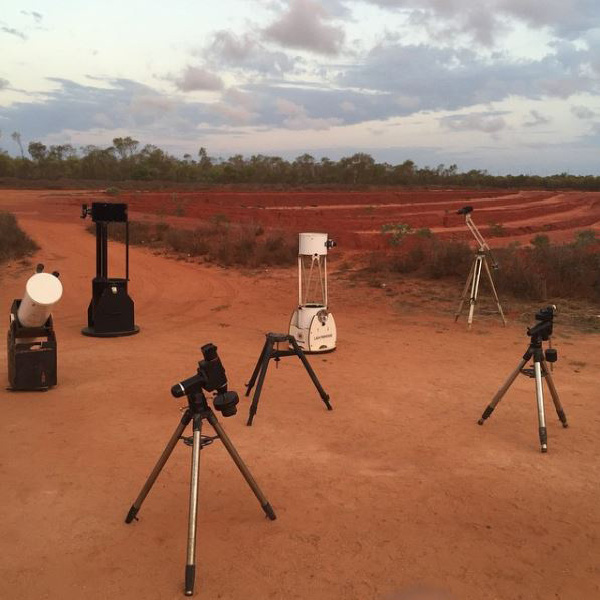 Book an Astro Tour for the ultimate stargazing experience in Broome.

If you can only drag yourself away from the resort pool for one day, make sure it’s to see the Horizontal Falls. The Horries are so impressive they even surprised Sir David Attenborough, who described them as ‘Australia’s most unusual natural wonder’. A great way to see them in a day is to jump on a Go Horizontal Falls Tour. You’ll whizz in a 13-seat aircraft north from Broome to land on Cockatoo Island, from where you’ll cruise to the Horizontal Falls. Guaranteed you’ll spend the day saying: OMG! OMG! OMG! 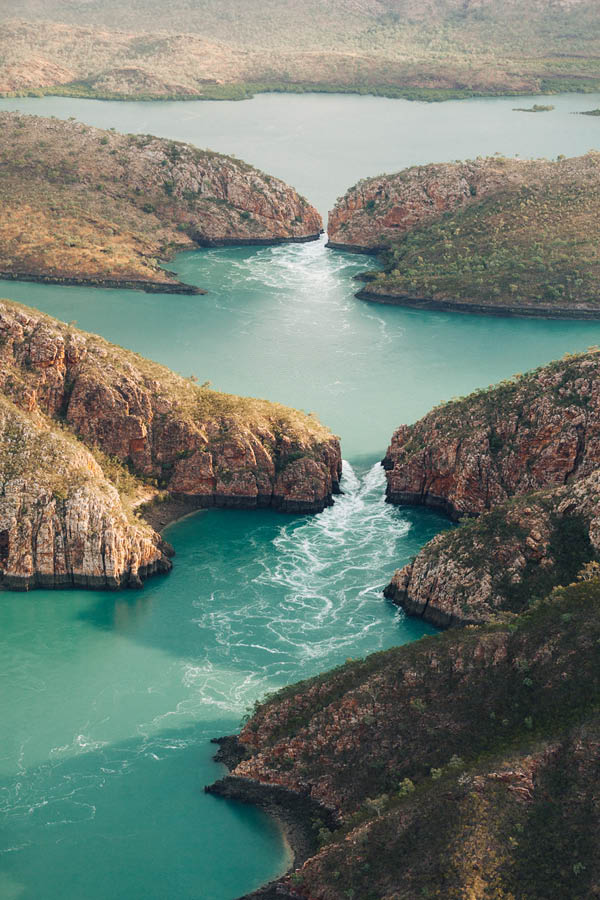 Take a cruise through the Kimberley.

Travelling to Broome? Read our guide to everything you need to know about Broome, including what to do, see, where to stay in Broome and the best tours to book. 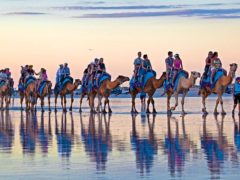 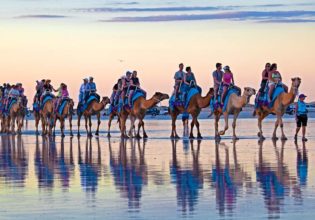