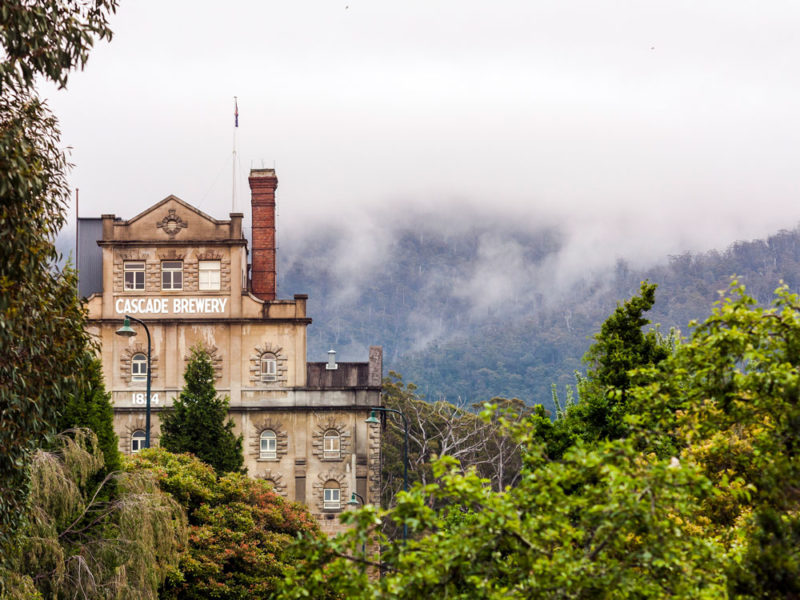 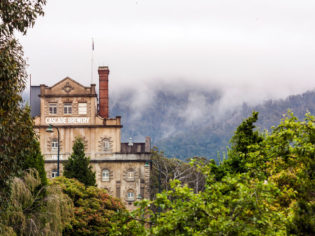 From bushwalking trails and abseils at the kunanyi/Mt Wellington summit to eco-cruising the rugged coast of southern Tasmania, buckle in for one of these al fresco excursions in and around Hobart.

Whether your idea of outdoor adventure means abseiling down the side of a mountain, kayaking and rafting along rivers, discovering the secrets of a city on foot or foraging for wild asparagus in the bush, you’ll be able to do it in Hobart and surrounds.

And all while breathing in that A-grade oxygen that only Tassie can supply – and no doubt with a platter of fresh Tassie produce or cool-climate wine within easy reach. Here, nine outdoor adventures you can have in the city or on an easy day trip.

1. Get high on kunanyi/Mt Wellington

Often snow-capped, kunanyi/Mt Wellington forms a magnificent backdrop to Hobart and can be reached by car or Explorer Bus from the city centre within just 20 minutes. The winding ascent passes through temperate rainforest, sub-alpine flora and glacial rock formations before opening up to some of the most spectacular views any city can lay claim to.

On a clear day, the summit offers a breathtaking panorama of Hobart and its waterways, Bruny Island and beyond. From here you can also set off on any number of well-marked bushwalks – there are over 40 trails to suit all levels of fitness and covering off a variety of landscapes, from fern gullies to eucalypt forests to rocky outcrops.

Try the easy 50-minute Silver Falls Loop or the more challenging three-hour return Organ Pipe Walk (one of Tasmania’s 60 Great Short Walks). Or, for an extra hit of adrenalin, consider embarking on a 100-metre abseil down the Organ Pipes themselves.

And when it comes to your descent back to Hobart? Sure, you can head back down the way you came up – but how about taking on the three-hour downhill walk, where you can stop at the base at Cascades Brewery for well-earned refreshment before joining the Hobart rivulet track, or even mountain biking it with Under Down Under Tours. 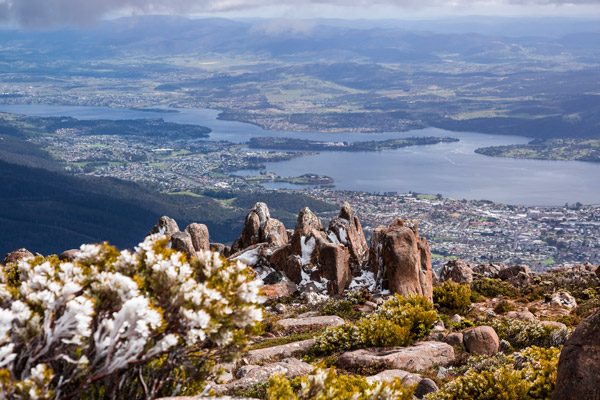 The breathtaking views atop kunanyi/Mt Wellington.

Hobart may be characterised by both kunanyi/Mt Wellington and the River Derwent but a rivulet running between them provides clues to its history as well as a compelling walking trail.

Before colonisation, the freshwater that flowed down from the mountain was an important source of drinking water for the mouheneener Tasmanian Aboriginal people. It then became Hobart’s main source of freshwater up until the 1860s and the settlement sprung on along its banks.

Follow the rivulet upstream from the centre of town (it disappears underground around Molle Street into a fascinating network of tunnels – but that’s another story) to the foot of kunanyi/Mt Wellington and back (2.7 kilometres one way). 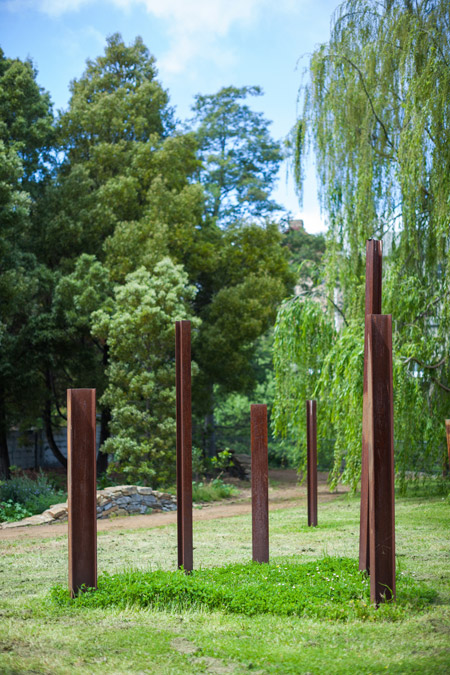 Meandering through the quiet and leafy suburb of South Hobart, the path is flanked by willow and gum trees before it opens up to views of the mountain. You’ll see interpretive signs along that way that reveal the historic uses of the rivulet, including by leather tanneries, flour mills and distilleries.

You’ll come upon the World Heritage-listed site of the Cascades Female Factory, a former Australian workhouse for female convicts, and conclude at the historic Cascades Brewery. Established in 1824, it’s Australia’s oldest brewery – and you can still stop for a beer or cider and to explore its impressive gardens before heading back to town. 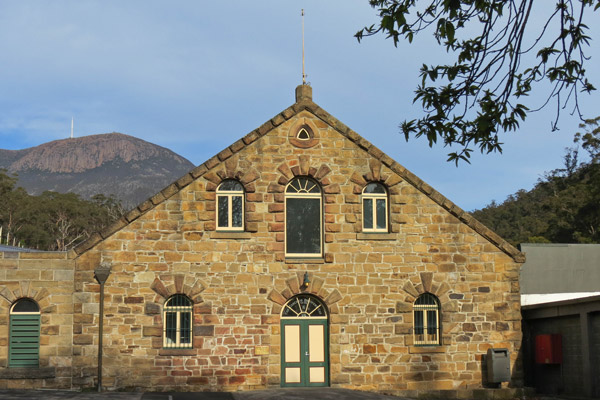 It might not be the highest octane of outdoor adventures but there’s definitely a thrill to catching the Mona ferry along the River Derwent from Brooke Street Pier to the city’s landmark museum. And the 25-minute journey is all part of the experience: David Walsh created Mona to be approached by water à la an island-top temple in Ancient Greece. 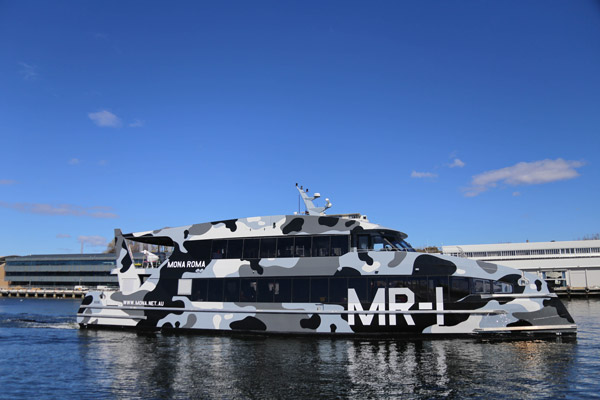 Catch the Mona Ferry on the Derwent River to the museum. (Image: Tourism Australia / Graham Freeman)

Station yourself at the back of the boat – the sheep and tigers, depending on which ferry you’ve scored, are the best seats in the house – to watch the Hobart waterfront slip from view as the cool Tassie air whips at your face. Inhale it in big gulps before spending the rest of the day absorbed underground at the subterranean gallery. 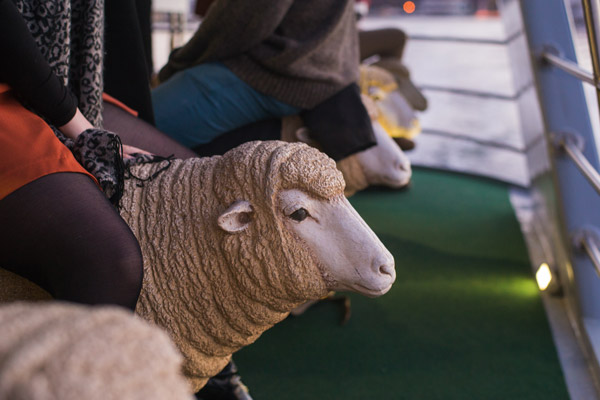 Ride atop the sheep seats on the Mona Roma. (Image: Lusy Productions)

There are many wild and wonderful day trips to be had from Hobart but none so thrilling, perhaps, as an excursion aboard one of Pennicott Wilderness Journeys’ iconic yellow boats – purpose-built for eco-cruising the rugged coast of southern Tasmania.

Opt for a full-day tour departing Hobart to join the three-hour Tasman Island or Bruny Island wilderness cruise; the former will have you skirting the spectacular coastline between Port Arthur and Eaglehawk Neck and beneath the highest vertical sea cliffs in the southern hemisphere at Cape Pillar; the latter takes in caves, sea stacks and the point where the Tasman Sea meets the mighty Southern Ocean, before a sightseeing tour of Bruny Island. 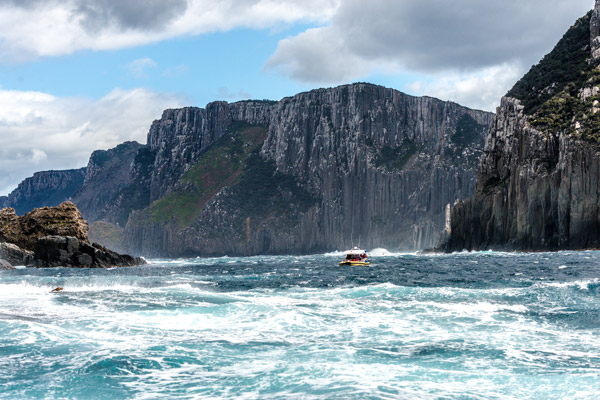 5. Embark on an e-bike adventure

With its portfolio of day tours easily accessible from Hobart, Tasmanian E-Bike Adventures provides a unique and sustainable way to explore the state’s wilderness, culture and history.

Make your way to the village of Dunalley, a 50-minute drive south-east of Hobart, to begin the Bangor Adventure or the Nohoiner Adventure. This exploration of the Bangor private estate on the Forestier Peninsula will see you traverse a wild and rarely accessed coastline by e-bike, exploring the site of the first contact between Tasmanian Aboriginal people and European maritime explorers.

And it wouldn’t be a Tassie adventure without some fine cool-climate wine (from nearby Bangor Vineyard Shed) and fresh produce served picnic-style along the way. This innovative local tour operator also offers a similar adventure on Maria Island, departing Triabunna, 1 hour 15 minutes’ drive north-east of Hobart. 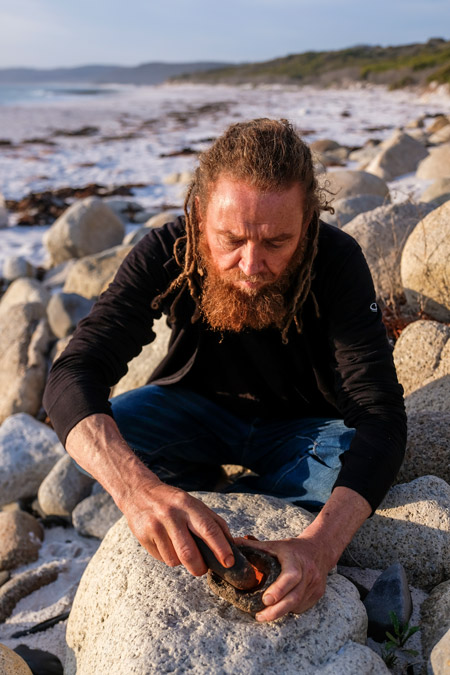 6. Tune into the treetops and Tassie’s Far South

It might be surprising to learn that Cockle Creek, the furthest point south you can drive to in Australia, is only two hours from Hobart. A road trip to stand on the beautiful sands of Recherche Bay, on the edge of the Tasmanian Wilderness World Heritage Area, is worth it alone but there’s more adventure to be had along the way.

Driving south out of Hobart, through the apple-abundant Huon Valley, you’ll reach the small town of Geeveston (home of some of Australia’s best sushi) from where you can pitch west towards Hartz Mountains National Park.

Here, Tahune Adventures (one hour 30 minutes from Hobart) offers to the chance to get high in the treetops with its Airwalk – an elevated walkway up to 50 metres above the forest floor, with views to the confluence of the Huon and Picton rivers and beyond to the peaks of the World Heritage Area.

And soon, it will introduce hang gliding into the mix. Tahune Adventures also partners with King River Rafting for a four-hour rafting or kayaking experience, Twin Rivers Adventure, along bubbling rapids and tranquil stretches of water. 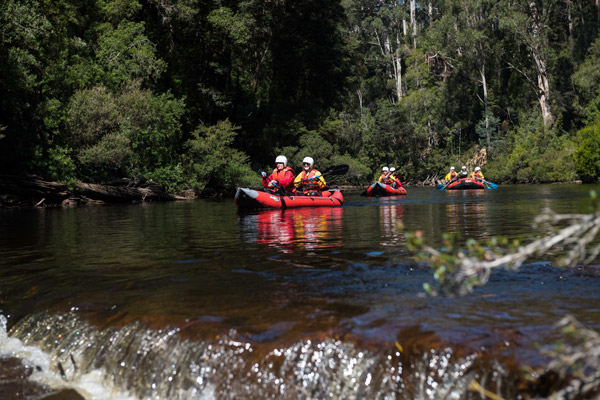 7. Make a splash in the Derwent River Valley

The Derwent Valley stretches from the Hobart suburb of Granton deep into the wildernesses of Mt Field National Park, Lake St. Clair and Lake Pedder, with plenty of diversions en route.

Head west of Hobart 30 minutes to New Norfolk and make your first stop Derwent Valley SUP School, where you can learn to stand-up paddleboard on the still waters of the River Derwent here.

If this gives you a taste for adventure in waters of Tassie’s western wilds then head further west still to join a kayak tour with Tassie Bound. Pick-up locations for the three-hour Paddle with the Platypus and 4.5-hour River Derwent Rapid Tour are both within a 50-minute drive of Hobart at Bushy Park, a quaint little village also known as the hop capital of Tasmania. 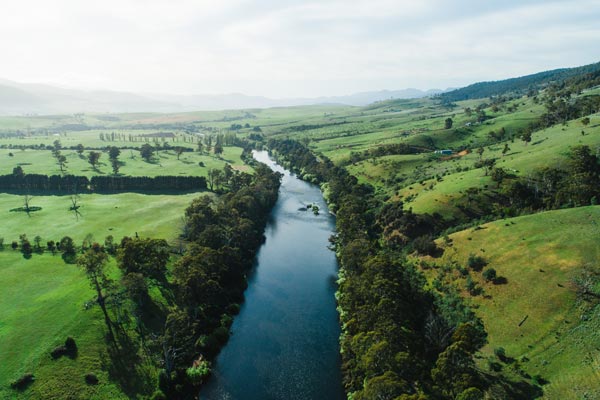 Continue on from Bushy Park and you’re starting to really hit Tasmania’s wild west. Mt Field National Park is the state’s first national park and its stunning vistas, excellent walks and abundant wildlife have been popular with nature lovers for well over 100 years.

Russell Falls, just over an hour from Hobart, is a much-loved spot – which even featured on Australia’s first stamp – that will give you a taste of Tassie’s magnificent wilderness.

The two-tiered cascade waterfall is accessed via an easy 1.4-kilometre return walk through deep-green mossy forest comprised of towering swamp gums and all manner of species typical of cool temperate rainforest including dogwood, musk and myrtle.

You can even see glow worms here at night. A valid parks pass is required for entry to Tasmania’s national parks. 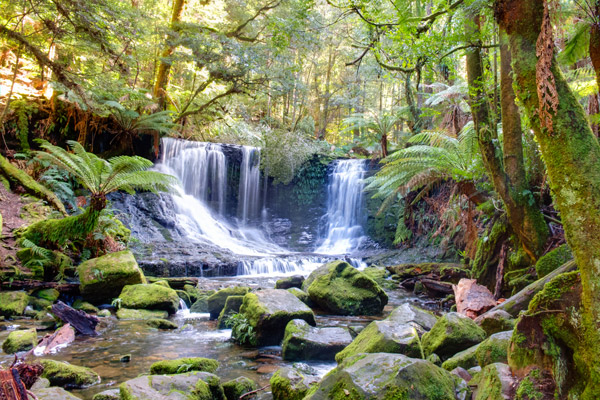 For an outdoor adventure of the edible variety within an hour’s drive of Hobart, join Mic Giuliani from Sirocco South on a foraging tour. Mic is a forager extraordinaire and proponent of Italian slow food made with the best Tassie ingredients (find him every first and third Sunday of the month at Hobart’s Farm Gate Market).

On this foodie excursion south-east of Hobart, Mic will teach you how to identify local flavours and ingredients before rustling the morning’s spoils up into a six-course luxury lunch overlooking sparkling Frederick Henry Bay, complemented by local seasonal meat and seafood and matched which a selection of wines from nearby Bream Creek Vineyard.

The menu, naturally, changes with the seasons but can include wild mushroom paté made with just-foraged saffron milk caps and slippery jacks and served with warm sourdough; freshly foraged asparagus barbecued, steamed and tossed into a frittata; stuffed lamb breast with weed salsa verde made of buckshorn plantain, ice plant, coastal salt bush and wild rocket; and freshly brewed coffee and sweetened ricotta and wild fennel pollen cannoli to finish. This exclusive experience is limited to just six guests per time. 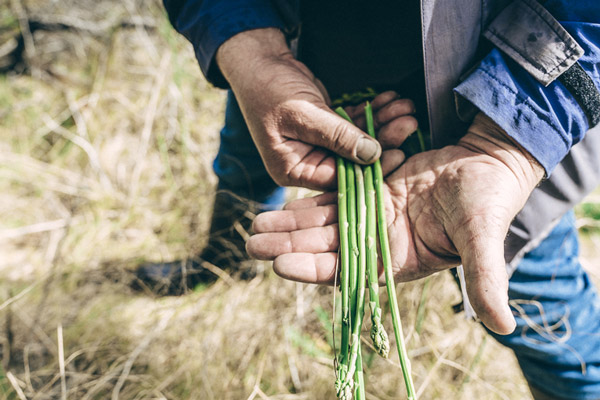 Join Mic Giuliani from Sirocco South on a foraging tour. 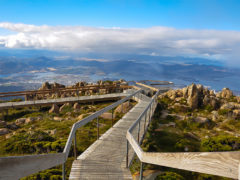 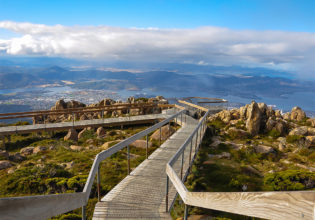 Sure, it’s alarmingly close to Antarctica, but that doesn’t mean Hobart is without its fair share of sunshine and warmth. With the iconic Falls Fe... 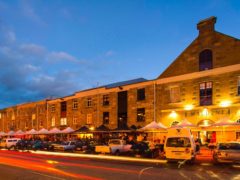 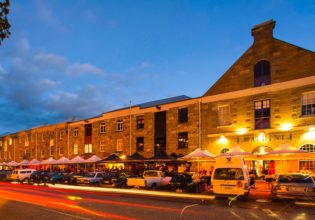 Take a historic strip of Georgian sandstone warehouses on Hobart’s city fringe and flank with Plane trees and sparkling harbour. Add a vivacious a... 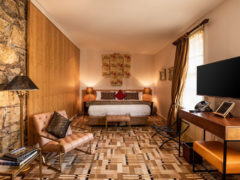 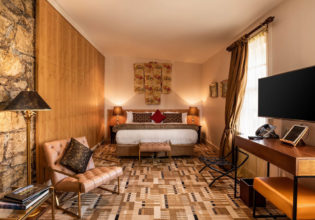 Boasting a world-class art collection and wow-factor mountain views, the Islington Hotel is one of Hobart’s most elegant – and surprising – bout... 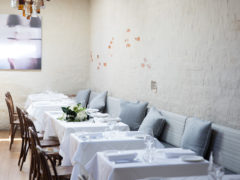 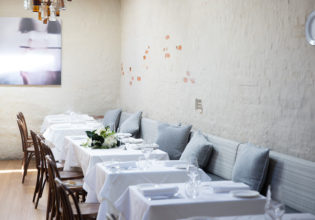 8 of the best things to do in Hobart’s MidTown

From Mona to North Hobart, Tasmania’s capital has definitely found its cool in recent years. Now this central pocket of town has joined the party, t... 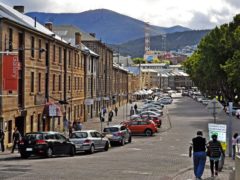 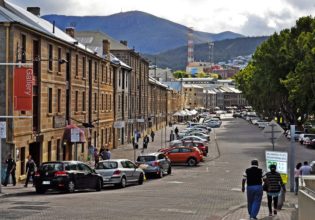 Where to shop in Salamanca Place

Nestled in the foothills of Battery Point between Hobart city and Sullivan’s Cove lies a strip of nearly 200-year-old sandstone warehousing with a c...