Why you will love whale watching on the Gold Coast 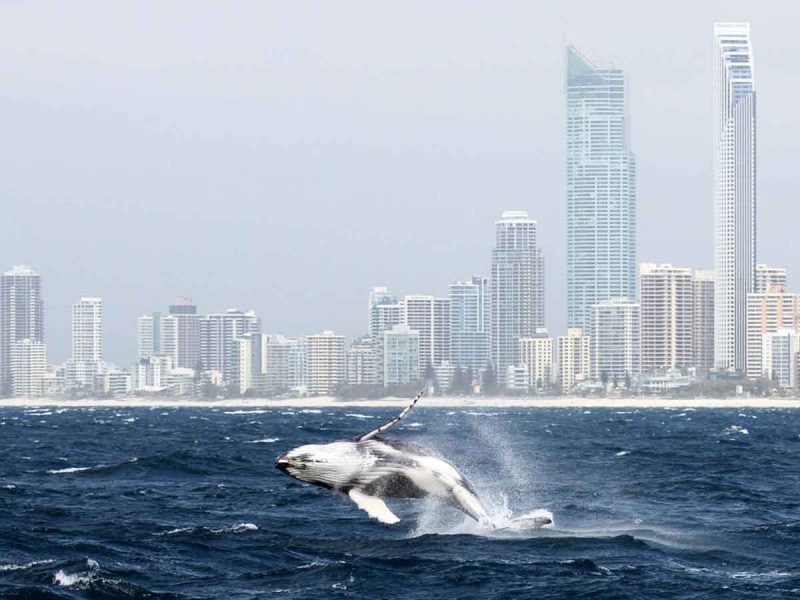 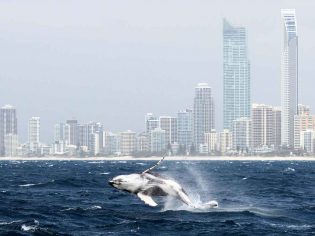 Humpback highways have their place, but they’re no match for what has essentially become one big Airbnb for our favourite creatures.

Much has been made over the Gold Coast skyline over the years, and with good reason. First, there’s the multitude of gleaming skyscrapers soaring above the city; a dazzling cityscape of outdoor pools and sunset reflections interspersed with the odd swaying palm. Then there’s the breathtaking juxtaposition of all that silvery glass metres away from pristine, white sand beaches.

What’s only ever whispered about in hushed circles, however, is how at certain times of the year, this setting essentially becomes a glamorous backdrop for the greatest nature show on Earth: pods of humpback whales breaching from said water – so much so that you can often see them from the windows of your accommodation. 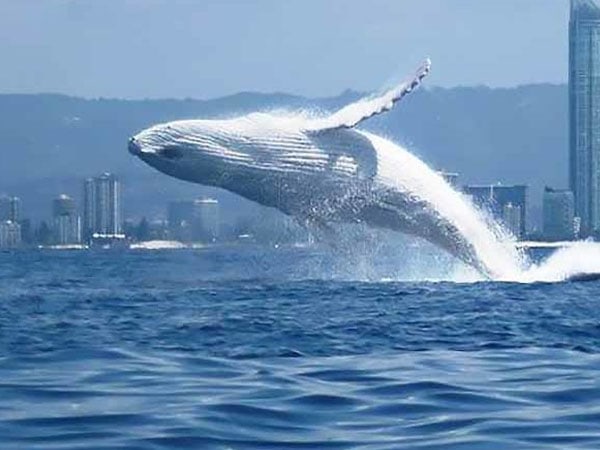 There is a staggering number of whale watching tour choices you can count on. (Image: Boattime Luxury Whale Watching)

It’s no surprise that our marine mates are just as keen on the Gold Coast as the rest of us, says Dr Olaf Meynecke, research fellow, Coastal and Marine Research Centre at Griffith University. “The Gold Coast bay is an open embayment providing shallow waters with sandy bottoms, and in particular the southern part of the Gold Coast bay gives protection from the south-easterly trade winds,” he explains. “It is the perfect place for humpback whales to socialise, rest and even give birth.”

Need a few more reasons to understand why the Gold Coast is the best place to go whale watching in Australia? We’re only too happy to oblige. 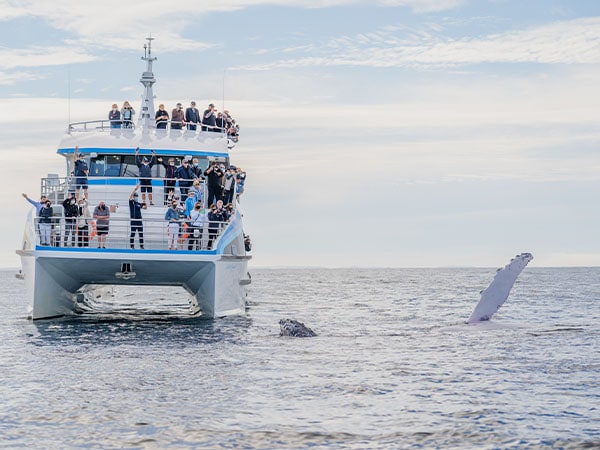 The Gold Coast is the perfect place for humpback whales to socialise, rest and even give birth. (Image: Sea World Cruises)

It’s the longest whale watching season in the country

Unlike some of nature’s best phenomena, this isn’t a case of a two-week window that changes every year; on the Gold Coast, the whales announce their arrival in late May and stick around until late October/early November. This not only gives you plenty of notice to book a trip, but the whales’ generosity with their scheduling allows you to research the perfect whale watching tour to see the magnificent creatures in action.

It’s also worth pointing out that the Gold Coast isn’t considered a ‘highway’ for whales on the move. Instead, they essentially treat The Goldie like a resort for mammals, sticking around for a solid break before it’s time to move on again. 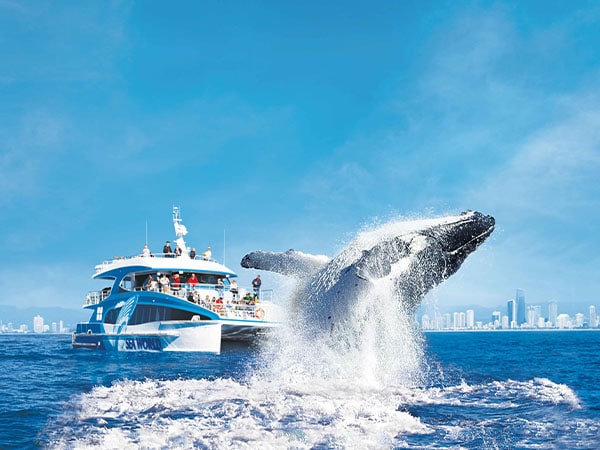 The whales announce their arrival in late May and stick around until late October/early November. (Image: Sea World Cruises)

Adult whales frolicking before you is impressive enough, but the warm waters of the Gold Coast means they treat the joint like a nursery, and the mums often bring their calves with them to prepare for their journey south in a few months. A sweeter maternal display you will not see. 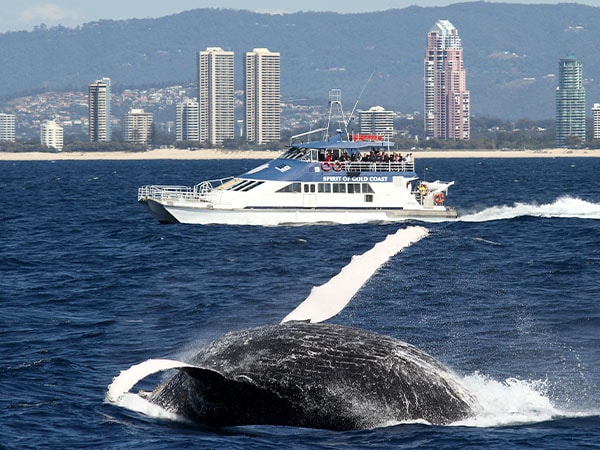 The whales get nice and close

Bring your binoculars if you like, but rest assured knowing that on a whale watching tour, you’re going to be seeing them up close and personal. This is because the continental shelf, where they like to hang out, is only 15 minutes from the shore, says Dr Meynecke, who also runs the Humpbacks and High-Rises initiative. 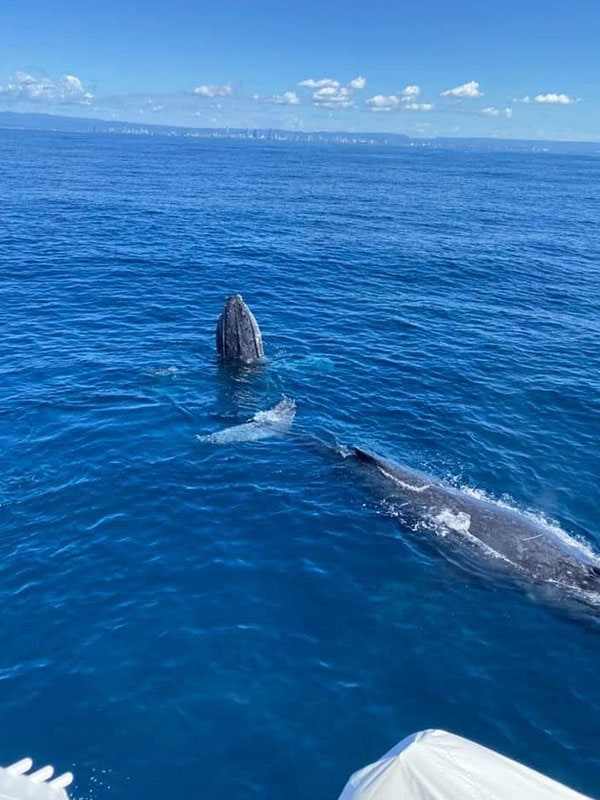 “The Gold Coast bay is a mixing pot for humpbacks – all ages, genders and attitudes can be found here,” he explains. “Socialising is one of the most important activities, which means we see a lot of surface behaviours, from breaches to tail slaps to pectoral slaps and more.”

He’s not kidding. Last season, Dr Meynecke witnessed the largest heat run he’s seen in over 10 years of his research. “About 16 whales followed a female. At some point, they were only a few kilometres off Surfers Paradise. [It was] an incredible sign to watch one of the largest animals on Earth steaming through the water, competing for a female.” 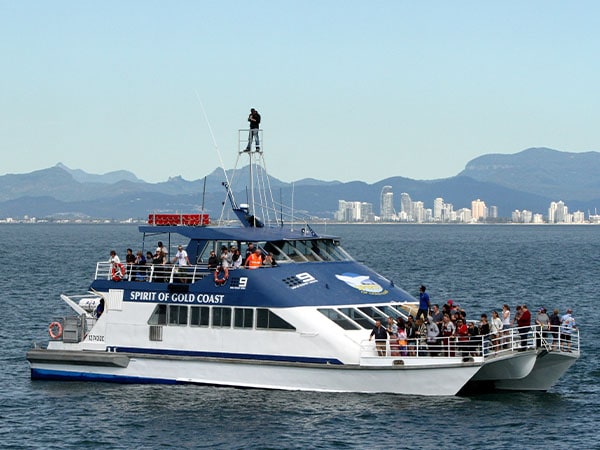 On a whale watching tour, you’re going to be seeing whales up close and personal. (Image: Spirit of Gold Coast)

There’s plenty to do

There are some places around the country where a whale watching session is followed by an $8 takeaway coffee and then, well, not much of anything. In the Gold Coast, however, you’re not only in humpback whale heaven, you’re still in the epicentre of good food, coffee, fun and adventure. There’s no reason why you can’t spend half a day enjoying a whale watching tour then backing up the aquatic action with a visit to the Gold Coast’s Home of the Arts precinct, or another local attraction. The options are as varied as the day is long. 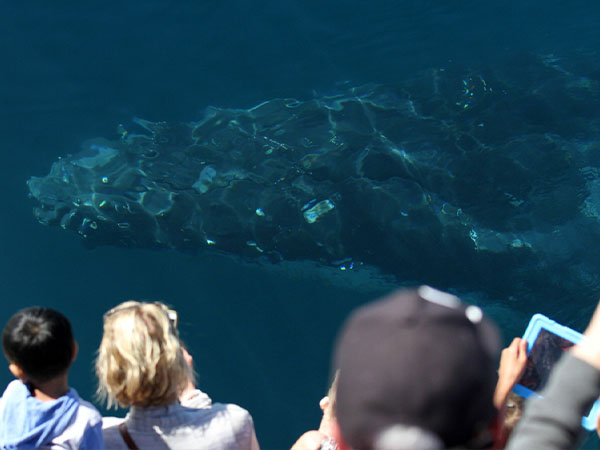 Your choices are endless

Fancy an intimate whale watching experience, prefer to pair the experience with a seafood platter, or perhaps you’d rather an affordable option on a larger vessel with marine experts on board? Regardless of your tastes (or budget), there is a staggering number of whale watching tour choices you can count on. Be sure to choose the boat most suitable for the type of experience you’d like to have, advises Dr Meynecke.

“Calm days are best for a relaxed experience, however, some waves around 15 knots of wind can see an increase in surface activity by whales.” he says. 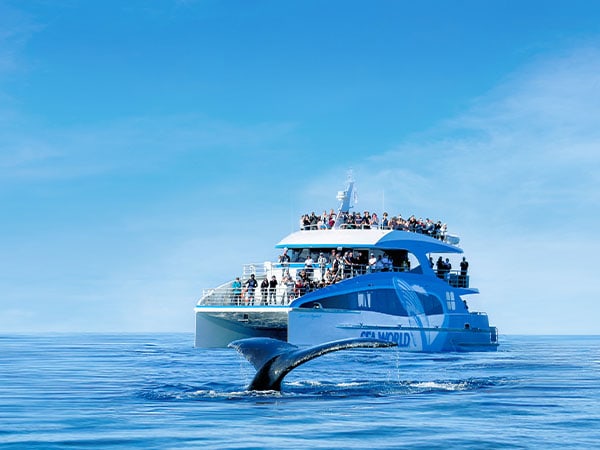 Calm days make for a relaxed tour, however a slight breeze of 15 knots does tend to increase activity. (Image: Sea World Cruises)

And remember, you can make Australia’s best whale watching spot your best holiday experience by first sourcing information on whale behaviour pre-tour (“It’s even more fun if you know what you’re looking at,” says Dr Meynecke) and joining in on the whale survey to pay it forward.

A holiday that makes a difference? It’s the ultimate reason to book your trip to the Gold Coast. 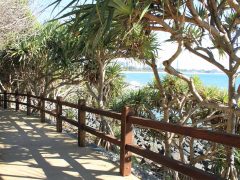 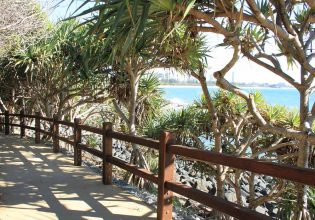 Lace up your boots and head out on an adventure, big or small, with these Gold Coast bush walks. The Gold Coast tends to conjure images of glitzy hig... 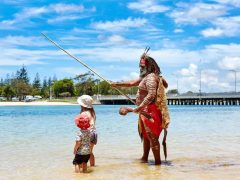 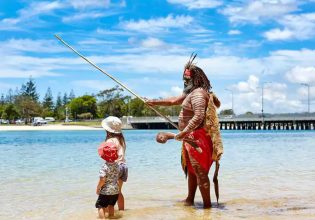 The best things to do in the Gold Coast with kids

From animal encounters to theme park crawls, Indigenous culture tours and hanging out on the city’s best beaches, here’s our pick of top spots to ... 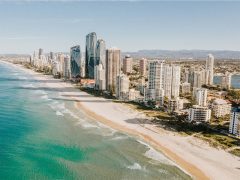 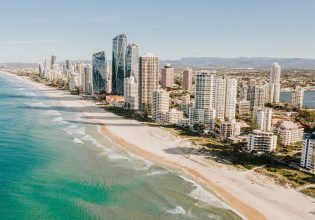 Surf, swim or sunbake on these gorgeous sweeps of Gold Coast sand.  The Sunshine State is not short on beaches, but it’s fair to say that the Gold... 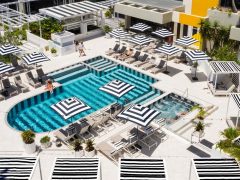 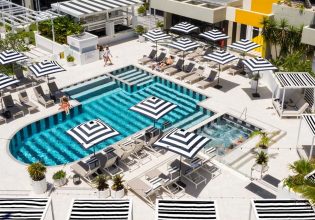 Luxury accommodation on the Gold Coast

From ritzy hotels with private marinas to low-rise beachfront resorts with swim-up bars and multi-bedroom villas, these are the luxury hotels to beat ... 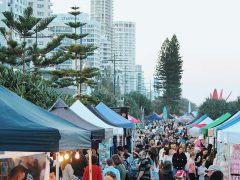 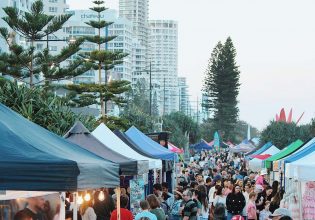 From lively street food markets to ground zero for emerging Aussie fashion designers, these are the markets not to miss on the Gold Coast Reflecting ... 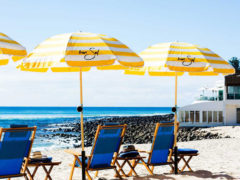 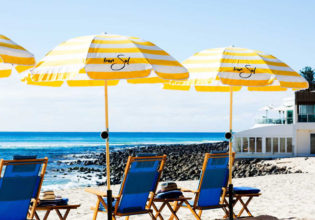 Sleep in style at Bon Sol in Burleigh Heads

Let your appreciation of good design guide you to Burleigh Heads for a very stylish stay. There is a small coastal town in northern NSW that serves a...