Ultimate weekends away in the NT 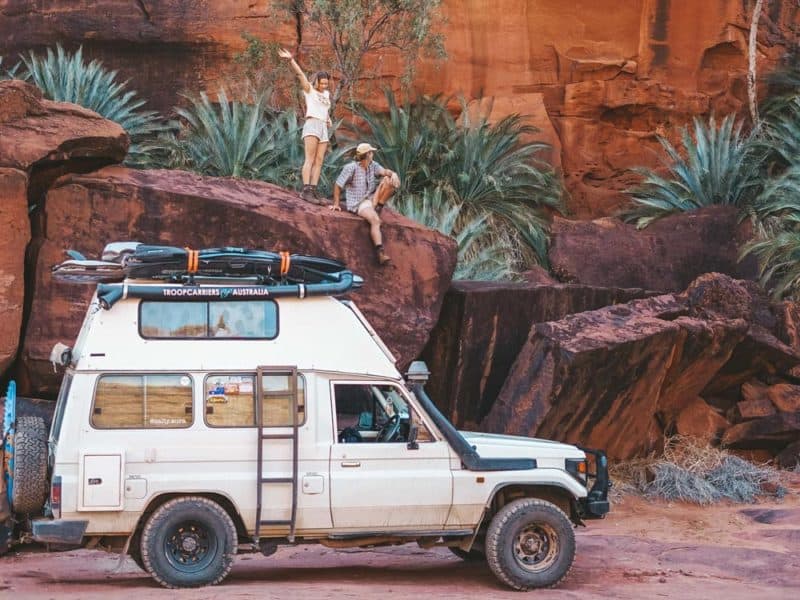 Epic adventures in the Northern Territory don’t have to be restricted to the bucket list. Some of its most stunning destinations, like Nitmiluk National Park, are perfect short break material. Here, the best weekends away in the NT for your hit list.

There’s nothing quite like cruising through the wetlands of Kakadu on a Yellow Water Billabong cruise, swimming in a plunge pool at the top of Gunlom Falls or gliding over the Mary River floodplains on an airboat at Bamurru Plains to soothe the soul.

And there’s nothing like marvelling at age-old rock art like that found at Burrungkuy (Nourlangie) and Ubirr. Even just a few days in this surprisingly accessible national park – three hours’ drive east of Darwin – will leave you feeling recharged long after you’ve returned to your everyday life. 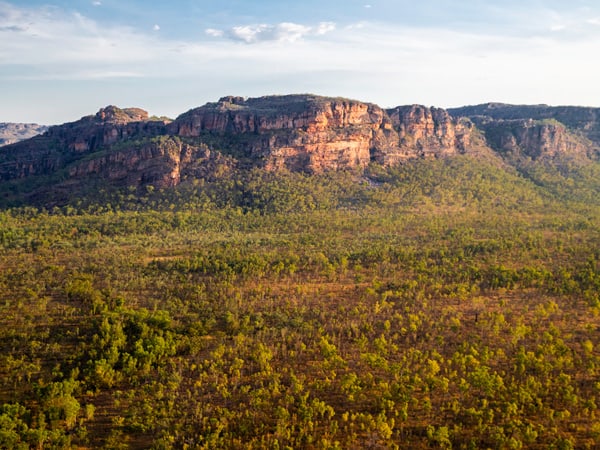 At once calm and full of life, to hang out on a billabong for a few days is to truly be a guest of the animal kingdom.

Stop short of Kakadu on the way from Darwin at the paperbark-fringed and lily-pad layered Corroboree Billabong, home to saltwater crocs and all manner of fish and birds including magpie geese, owls and black cockatoos. 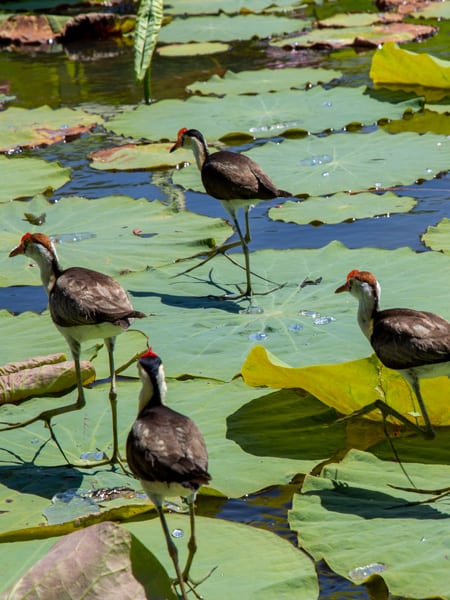 Hire a houseboat – complete with showers, barbecues, double suites, bunks for the kids and more – through Corroboree Houseboats to spend a deeply tranquil few days going with the flow on the Mary River. Those who want to escape the Darwin heat drive south for 60 minutes to the refreshing spring-fed waterfalls and shady canopy of Litchfield National Park – one of the NT’s best-kept secrets.

Surround yourself by its monsoonal vine forests and soak up those health-giving ions of its many waterfalls and crystal-clear swimming holes: don’t miss Wangi Falls, Florence Falls and Buley Rockhole.

Contrast this with some of the most enormous cathedral termite mounds you’ll find in the Top End and the series of large sandstone outcrops known as the Lost City for their uncanny evocation of an ancient civilisation (accessible via 4WD). 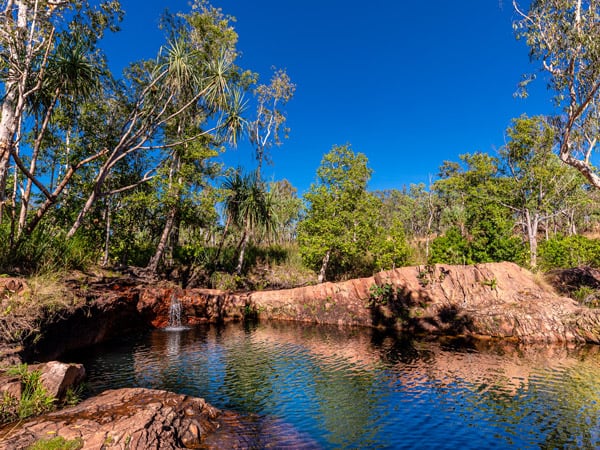 Tee yourself up for a cultural weekender in Darwin, which could incorporate any and all of the following: a city tour of vivid street art; a culinary trip around the world at the city’s famed food markets; a crash course in modern Territory history at spots like the Darwin Military Museum and the Museum and Art Gallery of the Northern Territory (MAGNT); an immersion in Aboriginal and Torres Strait Islander art at the Darwin Aboriginal Art Fair (6–8 August) and, until June 27, a tour of MAGNT’s Fresh: Connecting new & old art, which provides a rare opportunity to engage with treasures from the museum’s extensive Aboriginal, Australian and Southeast Asian art collection. The Tiwi Islands are a 20-minute scenic flight from Darwin but, well known for their vivid Indigenous culture of arts and craft, love of Aussie rules and rainbow-coloured beaches, present an altogether different proposition.

On Bathurst, one of the two main islands alongside Melville, Tiwi Island Retreat is a paradise island escape with a Tiwi twist that’s all about escaping the crowds and immersing yourself in its art and cultural tours, world-renowned fishing, outback adventures or simply just relaxing by the pool. 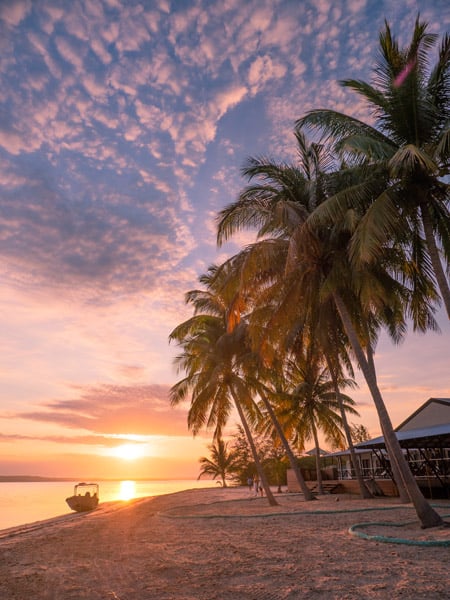 Or whisk yourself away to Arnhem Land’s Groote Eylandt, a 1.5-hour flight from Darwin and home to the Anindilyakwa people, whose language is thought to be one of the most ancient in Australia. 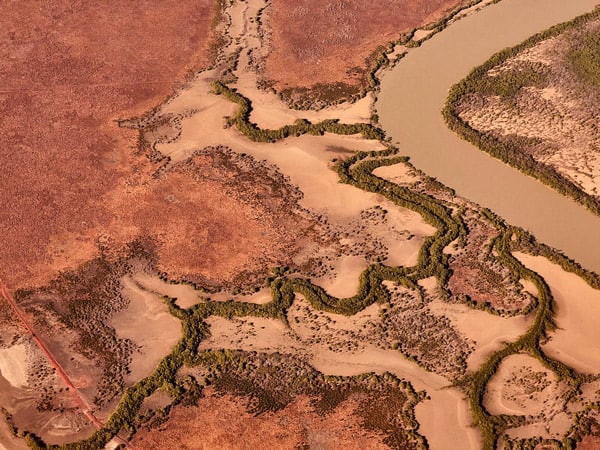 Groote Eylandt Lodge is a top fishing retreat with plenty to keep you occupied besides – not least a pandanus-fringed pool and those famous Top End sunsets. The lodge runs cultural tours in partnership with the island’s Traditional Owners, which take in a historic mission church, ancient cave paintings, a market garden and more.

Across the road from the lodge, Anindilyakwa Arts is a hub of creativity where you can ethically purchase authentic Aboriginal art, design and fashion. Fly to the Red Centre for a long weekend of quirky and cosmopolitan outback spirit with easy access to desert wildernesses the likes of Tjoritja/West MacDonnell National Park, with its cool scenic gorges dotted with refreshing swimming holes and plants that are relics from a bygone age of tropical forests.

Or time your visit for another light spectacular: Parrtjima, which goes from strength to strength each year, or for one of Alice’s many other festivals such as the Alice Springs Beanie Festival (25–28 June). 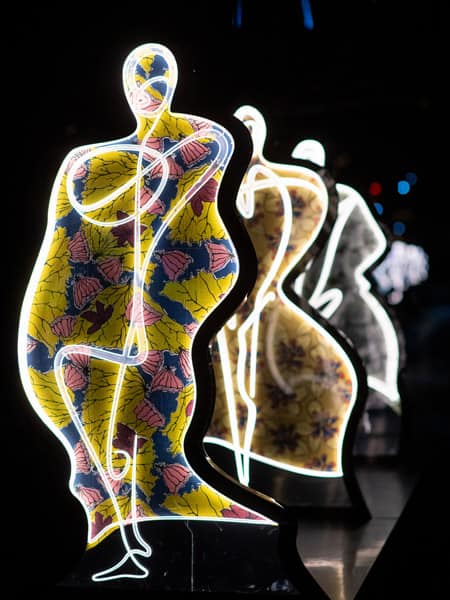 Located within Finke Gorge National Park, Palm Valley is an oasis of rare plant species, including red cabbage palms, set within a maze of sandstone amphitheatres and gorges.

It’s this rust, red and green landscape that inspired painter Albert Namatjira, who was born in the Hermannsburg Lutheran Mission, 30 minutes’ drive away. Visit the Hermannsburg Historic Precinct to learn its stories, have tea and scones in Kata Anga Tea Rooms, and learn about its artistic legacy that still thrives today.

Visit on a day trip from Alice Springs or on tour with AAT Kings, or opt to camp overnight nearby at Ntaria Caravan Park or in Palm Valley itself. Believe it or not, Uluru makes for a pretty perfect long weekend. In three days you can absorb the magic, serenity and power of Uluru and Kata Tjuta and understand their significance to Anangu, dedicating full days to exploring each by foot, camel and even by air.

And with time left over to soak in those famous sunrises and sunsets, have dune-top dinner under the stars (Ayers Rock Resort’s Tali Wiru), and take in a good dose of art: whether that’s Anangu-owned art centre Maruku Arts or Bruce Munro’s Field of Light. 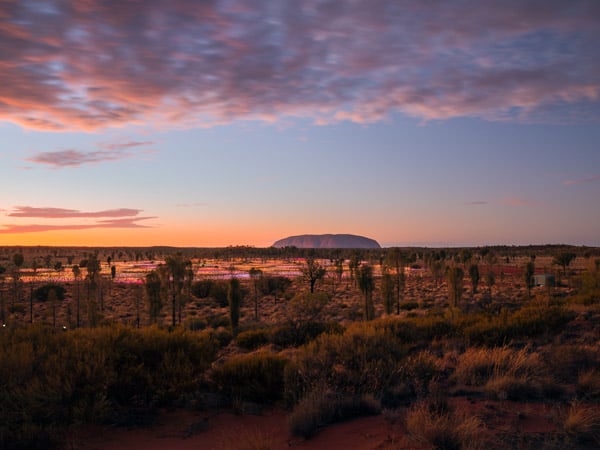 Part of Watarrka National Park, it’s a 3.5-hour drive from both Alice Springs and Uluru to Kings Canyon, an ancient canyon forged in layers of sandstone and shale that soars 270 metres above sea level and plummets in places to the lush Garden of Eden. 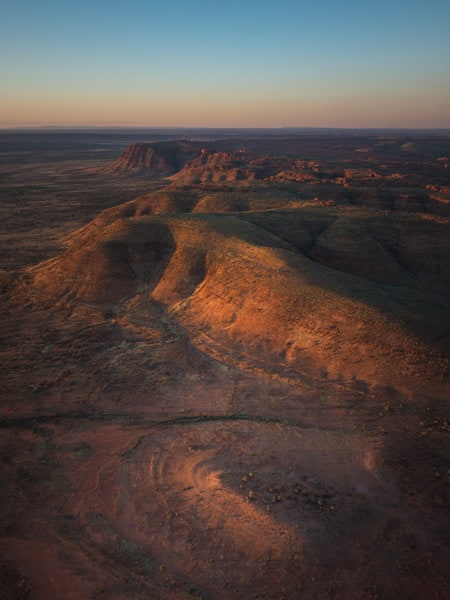 Challenge yourself on the Kings Canyon Rim Walk then retreat to your glampsite at Kings Canyon Resort (where you can’t miss a session at the Sunset Viewing Platform complete with pop-up bar). 8 Aboriginal cultural tours you will love in the NT

The Northern Territory is the place to delve deeper into Indigenous Australia with an impressive number of Aboriginal tours available. With so many o... 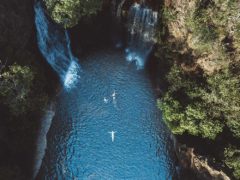 Starting in Tropical North Queensland and finishing in the Top End, this epic 3500-kilometre journey of a lifetime from Cairns to Darwin cuts through ... 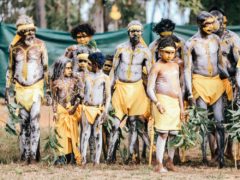 Join the Yolngu nation in the NT’s remote North East Arnhem Land to feel the heartbeat of the country at its most important cultural event, Garma. ... 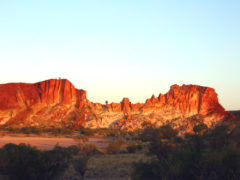 The best road trips in the NT 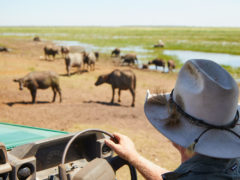 Roaming with buffalo, cruising with crocs and gliding with some 280 bird species that live here in this watery world: a safari through Australia's Top...