31 days of summer: the best things to do in January 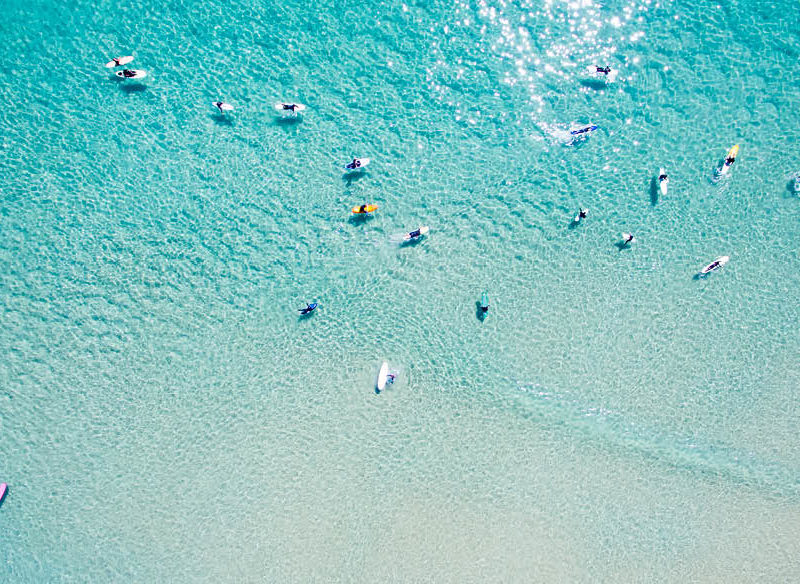 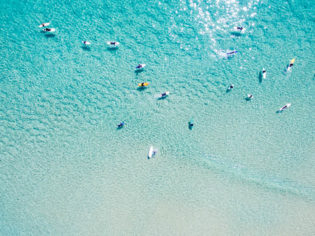 Kick start the New Year with gusto by ticking off some of these summer events, exhibitions and festivals. Here are the absolute best things to do in January.

January 1: Start the year off by dancing with cake, Vic

Keep the party going, wherever you are. On the grounds of an Italianate mansion, Let Them Eat Cake at Werribee Park (starting 1 January) is a celebration of all things dance (with international and local DJs crowding the talent list) that’s styled as a garden party with artisanal food and cocktail bars.

January 2: Eat all the things at The Taste of Summer, Tas

As if you need any more proof that Hobart is a foodie capital, The Taste of Summer lays it on thick, with seafood, cheeses, cool-climate wines and more (28 December – 3 January).

January 3: Relive your childhood at your community pool, anywhere

Replay your childhood of sunbaking on hot cement working up the courage to jump off the blocks and getting crazy tan lines. Top it off by eating hot chips cooked in decades-old oil, lemon Calippos and packets of Nerds.

Yes, it’s all about burnouts and loud, fast cars, and you can wear your Guns N’ Roses T-shirt and wallet chain, but Summernats is a 31-year-old Canberran cultural institution that you’ll smell before you see. If you like cars and gin in a tin, you could spend a worse day than at this hugely popular event (4–7 January).

West is best for summer-time sunsets where you can watch the sun dip into the ocean. Our pick is away from the crowds at lovely Cottesloe Beach. Grab a bottle of vino and settle in for a light show like no other. While you’re in the area, why not take a secret swim

We’re spoiled for choice with Sydney Festival shows, but Tree of Codes (6, 7, 9 & 10 January) promises to dazzle. A contemporary ballet that premiered to critical acclaim at the Manchester International Festival, it brings together the talents of choreographer Wayne McGregor, installation artist Olafur Eliasson and electronic composer Jamie xx.

January 7: Get your Mofo on, Tas

You’ve heard of Dark Mofo, but don’t expect any less attitude at its sunnier sister, Mofo, (Hobart 5–22 Jan and Launceston 12–14 Jan). Get your fix of experimental live music and spend your time lapping up the sun and drinking local wine and brews on the lawn at Mona.

January 8: Take in some art and a little disco, Vic

Lose yourself in the dark and mesmerising world of Sydney-based artist Del Kathryn Barton in her major solo show, The Highway is a Disco at the NGV in Melbourne.

Big Crystal Creek is a spectacular swimming hole with rockslides and waterfalls, about 40 minutes’ drive north of Townsville off the Bruce Highway. The water is cool and clear. Afterwards drive a little further up the Bruce Highway to Mutarnee for some mango ice-cream from Frosty Mango.

January 10: Elvis in the outback, NSW

Even if you’re not the biggest fan of The King, it’s worth a pilgrimage to country NSW to Parkes Elvis Festival just for the outback kitsch. For 25 years, the pilgrims, impersonators, super-fans and the curious have revelled in the music, fanfare and main street parade. Travel in style from Sydney aboard the Blue Suede Express or Elvis Express trains.

January 11: Get down with the birders, WA

An interactive and sensory experience, Bird Song is resplendent with the bird recordings of celebrated field recordist John Hutchinson paired with illustrations. It’s on at the State Library of WA in Perth (6 November – 31 January).

Balance all that beach and cricket time with some culture in the garden, of the Royal Botanic variety. You don’t have to take Australian Shakespeare Company’s A Midsummer Night’s Dream too seriously (it’s a comedy, after all). It’s all about the food and wine on the picnic rug among the funky lighting at Melbourne’s stunning Royal Botanic Gardens. You can also have gourmet food delivered and there’s now a Gold Class option too.

January 13: Australia’s Tour Down Under kicks off, SA

OK, so usually three sports own the Australian summer: the Sydney to Hobart, the Australian Open and whatever cricket happens to be playing. If you have even a vague interest in cycling, add the Santos Tour Down Under in Adelaide (13–21 January) to this. The South Australian capital parties hard during what is Australia’s Tour de France.

Beach. Tick. Pool. Tick. But what if you have access to neither? Just go retro. Conserve water and run through the sprinkler with the kids (or just by yourself). Don’t own a pool? On your weekly migration to Bunnings, pick up a blow-up pool and plop it in the courtyard. Better still, if you have a sloping backyard, set up the Slip ‘N Slide. You will be neighbourhood royalty.

Tennis fans, time to love those grunters because you know what’s starting today, the Open. Cancel all your appointments, it’s all about Raffa and Djokovic until 28 Jan.

January 16: Watch the seagulls lose their minds over a chip, a beach near you

Feed chips to the greedy seagulls at Manly, St Kilda, Glenelg, Cottesloe, anywhere. Nothing says summer like watching these absurd birds bully each other over a stick of fried potato.

January 17: Get waterside in Sydney for a Sunday session, NSW

When the evenings are long, you want to squeeze every last second out of the weekend and Sydney has some great spots for a chilled out Sunday session. Our picks are the grassy hill at North Bondi, where you might find a DJ spinning laid-back vibes, Manly Wharf for a sundowner, and Coogee Pavilion for a nibble and a good, old people-watch.

Summer glamping options have gone ballistic over the past couple of years, from The Flinders Ranges and Uluru to Sydney’s Cockatoo Island and the Great Ocean Road. Companies like Happy Glamper in Mornington Peninsula will even let you choose the location and set it up for you. There’s also foodie-themed glamping at the likes of Truffle Lodge on the banks of Tassie’s Derwent River (in a truffle orchard) or plenty of vineyard stays such as at Balgownie Estate Bendigo, which open mid-summer. Check out our glamping spots of choice.

January 19: A fast-paced wander in the Electric Gardens, Perth

Now in three states, Electric Gardens has a roster of international and local DJs lined up for its full-day extravaganzas. This year is headlined by Fatboy Slim at Perth’s Red Hill Auditorium.

January 20: Take an evening stroll with the wildlife in Melbourne, Vic

Making the most of balmy evenings doesn’t have to mean hanging out at Melbourne’s rooftop bars, although we love that, too; this is one for the whole family. Head to Woodlands Historic Park for a four-hour twilight tour with Melbourne Nocturnal Wildlife Tours where you’ll spot wallabies, bandicoots and kangaroos.

January 21: Go for broke and escape to Straddie for the weekend, Qld

Stradbroke Island is Brisbane’s oft put-off nearby escape. Don’t wait to get a group together, North Straddie is just over an hour away from Brissie, so you should be hopping on that ferry every Friday afternoon and spending the weekend neck-deep in crystal waters.

Many people avoid the NT in the Wet, but if you talk to the locals, they’ll tell you they prefer it. Why? Because the waterfalls are in awe-inspiring force, the thunderstorms are terrifyingly terrific and the birdlife is clearly loving it all. Not all roads and accommodation is open, but find yourself somewhere to stay with air-con, hop on a scenic helicopter flight, and take full advantage of this quieter (and cheaper) time of year. Read our story.

January 23: Getting out onto the water at Wineglass Bay, Tas

Nothing beats catching a glimpse of a flying fish while aboard an eco tour in Tassie’s pristinely beautiful Wineglass Bay. You’ll also spot seals, dolphins, and a load of birdlife. It’s best to do this in the summer when it’s not too bitingly chilly. Maybe consider lux-sizing with the sail-walk option too.

January 24: Visit the hidden side of the Royal National Park, Sydney

Everyone knows the Royal National Park for the Figure Eight Pools but if you stop off at Audley Weir on the way, you can hire a kayak or canoe and paddle upstream to some beautiful rivers and creeks, which attract far less tourists.

January 25: Order a ‘fisherman’s basket’ and revel in the grease, anywhere

The all-fried, all-fat fisherman’s basket full of ambiguous seafood is a summer tradition all over this great land. Usually consumed while you’re still sandy, salty and the unmistakable lobster hue is just starting to show on your skin.

It’s the one day of the year to revel in every Aussie cliché there is. Throw a prawn on the barbie, wear a cork hat, exclusively drink out of tinnies, and argue with mates about your nominated sporting event of choice. It doesn’t matter where you are in the country, so long as your Australia Day involves a barbecue and a backyard/outdoor area, you’re doing it right.

Triple J’s Hottest 100 is the list of all lists, the day of days for music nerds, and a reasonable excuse for a party. Although not being held on Australia Day (as traditionally it was), it’s still on a Saturday, so the parties can still be had!

January 28: You promised yourself… on your couch

You said you were going to read ‘that’ book for the past year. Today is the day. Settle into the hammock or onto the beach towel with a glass of chilled rosé, naturally.

January 29: Falling into line in Tassie

The undisputed Mack Daddy of summer festivals, Falls just keeps getting bigger. Expect to see Liam Gallagher, Angus & Julia Stone, Flume, Fleet Foxes and Daryl Braithwaite; yes, you read that right, you will go riding on the horses. Be quick for tickets to the Marion Bay chapter, 29 – 31 December.

January 30: Getting up and over the Flinders Ranges, SA

It doesn’t matter what time of year it is, a scenic flight over the Flinders is the ultimate way to reset your amazement button. It’s like taking drawing in a deep, relaxing breath and exhaling, but multiplied by 1000. Read our story.

No matter the vessel, it’s time to get on water: fishing in the tinnie, a ferry ride for fish and chips, sweating it out under the sails or, perhaps, an evening aboard a ‘six-star’ superyacht, like the Infinity Pacific available for private charter on Sydney Harbour (just a cool $3500 an hour, minimum four hours). The 40-metre, three-level ship should keep the friends and fam satisfied with its spacious master suite, four other spacious cabins, and floor-to ceiling glass Panorama Sunroom with Jacuzzi and interiors taken care of by French interior designer Frédéric Méchiche.