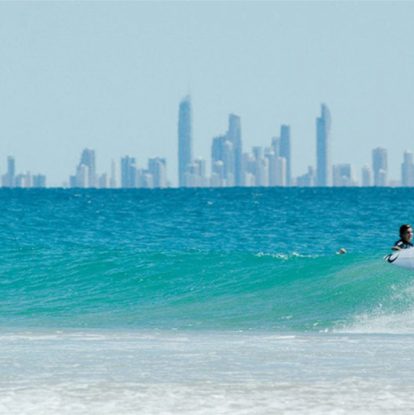 The rise and rise of Queensland's twin cities

Once overlooked in favor of the bright lights and cultural allures of Sydney and Melbourne, the Queensland cities of Brisbane and The Gold Coast have had a serious injection of style in the last few years to emerge as Australia’s new capitals of cool.

It wasn’t so long ago that fine dining in Brisbane or the Gold Coast was widely perceived as having the choice between salad or fries with your main meal, and culture involved going to a movie on the weekend.

Outsiders referred to Brisbane as Bris-Vegas with tongues firmly in cheek, but it was the antithesis of the 24-hour US super-city. Then a funny thing happened; Brisbane turned into one of the fastest-growing metropolises in the western world.

New five-star hotels, innovative speakeasies and bars, and gourmet eateries opened all across the city, and locals reclaimed the name Bris-Vegas as a badge of pride. It summed up the energy of Australia’s new hippest city (everyone from Forbes to GQ Australia has anointed it Australia’s coolest city). 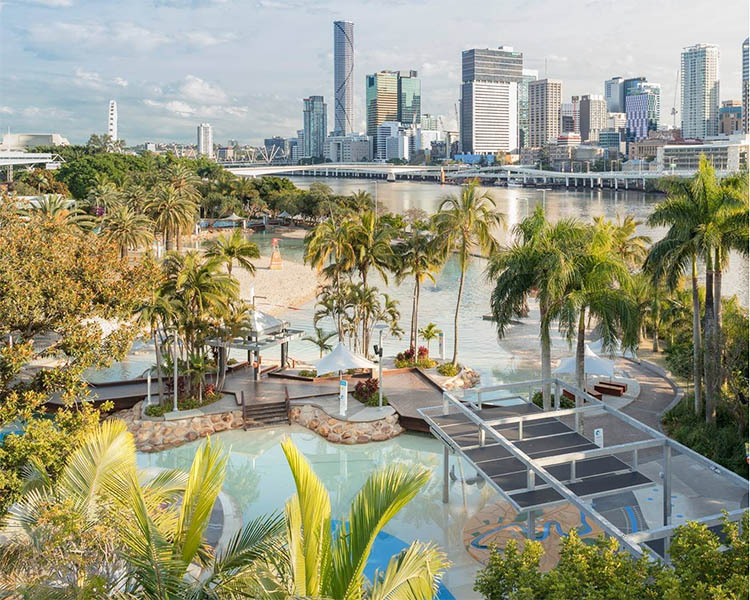 At the same time the Gold Coast – popular since the ’50s as the place for families with its offerings of theme parks and family restaurants – has emerged as one of Australia’s unlikeliest cultural hotspots (to go with its 35-mile strip of famous beaches), making the Gold Coast and Brisbane the best new double act in Australian tourism.

I grew up here and, after traveling the world, I chose to move back here with my American-born wife. And I’m not alone; these days Melburnians and Sydneysiders are moving to Brisbane and the Gold Coast in the thousands each year, and international travelers are flocking here to experience the new cosmopolitan additions and wonderfully Australian laidback pace of life. 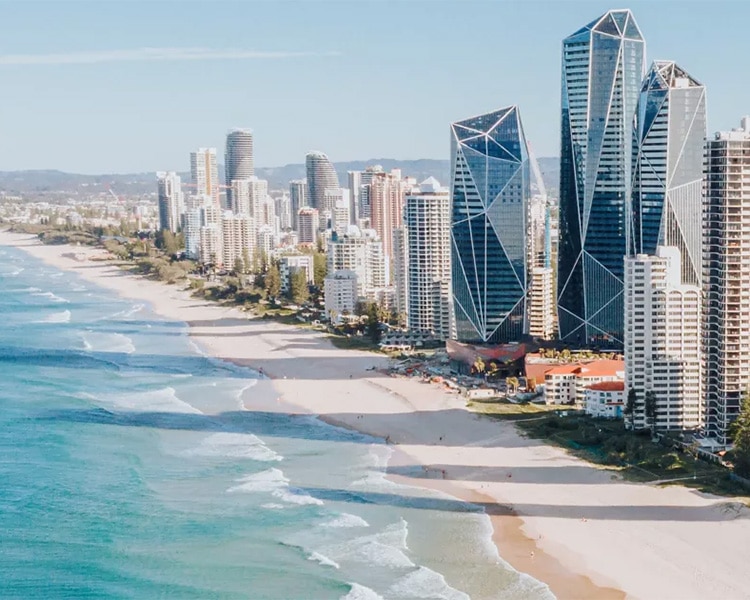 The glistening heart of the Gold Coast.

The first thing you need to know about Brisbane is that it’s the perfect walking city for visitors. Set around a slow moving river (the imaginatively named Brisbane River), which snakes its way through neighborhoods, parks and the city center, you can walk between the best cultural and entertainment areas with ease.

One such place is Howard Smith Wharves. Located on the edge of the city center, these historic wharves along the Brisbane River, created by the government during the Great Depression to provide jobs, stood silent and neglected for 50 years before recently being transformed into Australia’s best new waterside entertainment and lifestyle development. Here you’ll find Crystalbrook Vincent, a hotel carved into the sandstone cliffs above the river where the works of artist Vincent Fantauzzo feature prominently throughout the property (and lend it its name), and the pool deck is the place to be. 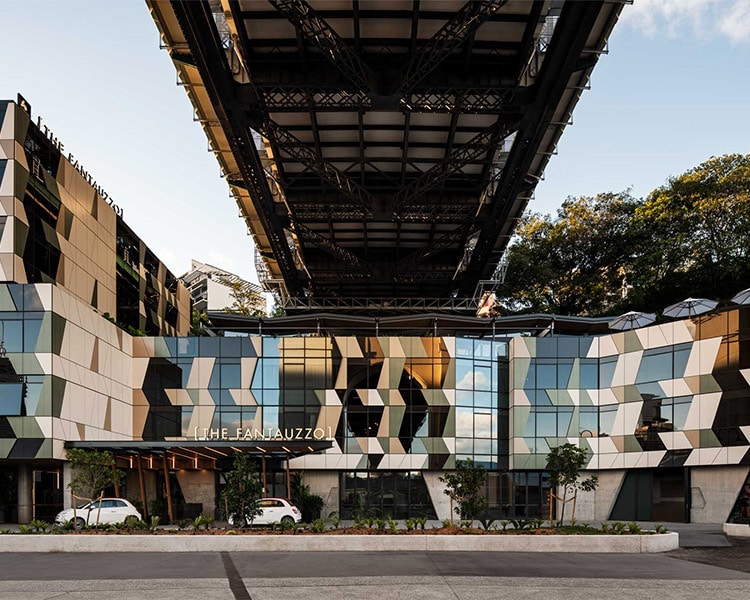 The Crystalbrook Vincent hotel is carved into the sandstone cliffs.

Brisbane’s hippest locals gather for craft brews at Felons Brewing Co., or for cocktails at Mr Percival’s – a riverfront bar with a European beach club vibe. The dining choices include the much lauded Yoko Dining, with its Japanese izakaya menu, and the contemporary Greek taverna, Greca Restaurant, both courtesy of the prolific Gold Coast-born restaurateur Jonathan Barthelmess. 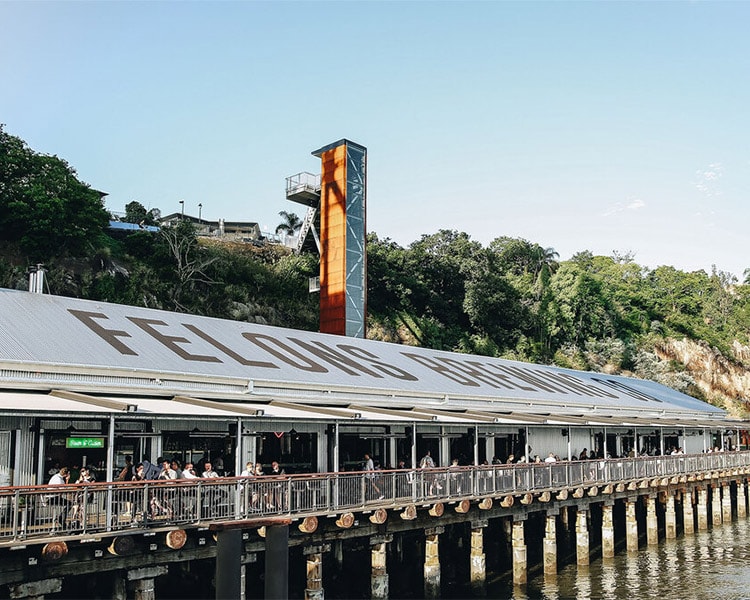 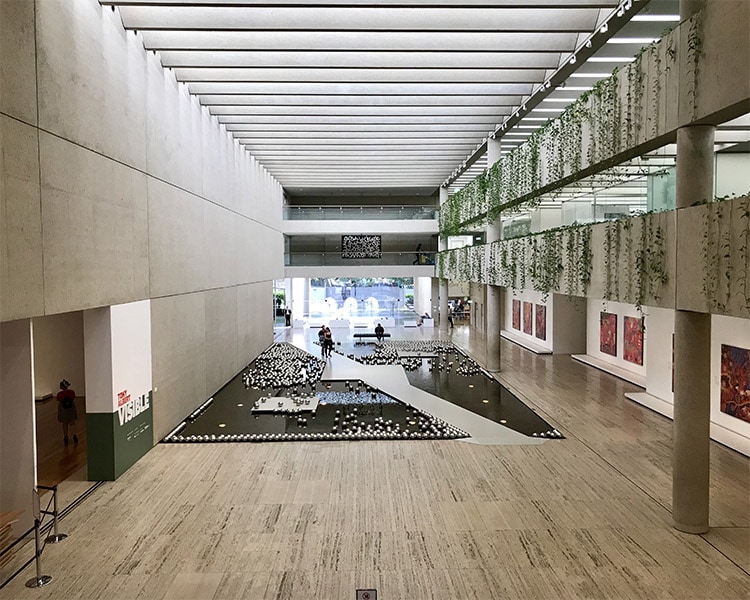 One of the most conspicuous indicators of Brisbane’s regeneration is the proliferation of new hotels that now dot the landscape. Prior to the arrival of the internationally renowned W brand in Brisbane back in 2018, there hadn’t been a new five-star hotel constructed in the city for 20 years. Now visitors can take their pick: The W Brisbane and the newly opened The Westin both position themselves as urban retreats in the heart of the city; The Westin has Brisbane’s first swim-up bar and the first heavenly day spa in Australia, while W Brisbane’s wet deck roof-top bar offers cocktails overlooking the river. 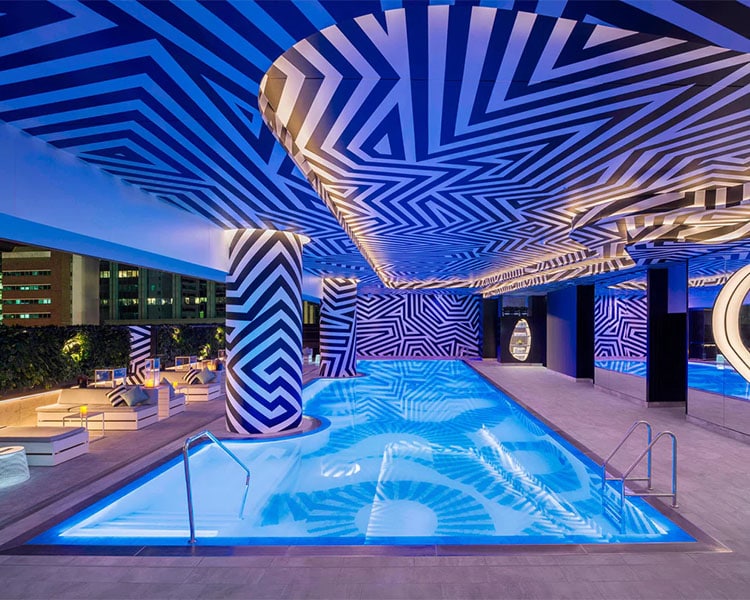 Then there’s The Calile Hotel. Located in Fortitude Valley, Brisbane’s trendiest neighborhood (it’s a 10-minute walk from the center of the city), the property has fashioned itself as Australia’s first ‘urban resort’; it’s seven stories of urban chic that’s as much South Beach Miami as it is Queensland tropics. Take up position in a poolside cabana and order a cocktail, or sample award winning Greek fare at one of Brisbane’s best restaurants, Hellenika.

The boutique stores located in The Calile’s lobby (including local favorites Bassike, Camilla and Marc, Bec and Bridge And Mister Zimi) lead out to James Street, a former industrial block in a dodgy part of the city that is now one of Australia’s foremost retail and lifestyle strips, with more than 130 specialty stores, art galleries, design showrooms, restaurants and bars – the perfect metaphor for Brisbane itself. 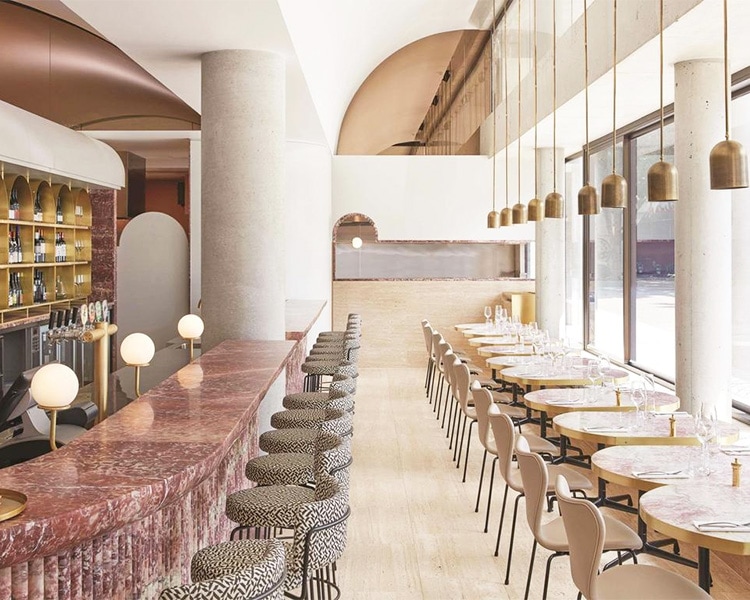 Downstairs at The Calile hotel.

Once you’ve exhausted Brisbane’s myriad delights, it’s easy to access the Gold Coast (50 miles south) via train or shuttle. While the region is spread across 35 miles of sparkling coastline, the Gold Coast itself is built on a grid and can be explored by public buses, light rail, taxi or Uber.

The aptly named Surfers Paradise neighborhood (“Surfers” to locals) has long been the Coast’s focal point, and has undergone a trendy transformation, spearheaded by the likes of US bar and restaurant brand Hyde Paradiso launching its first foray into Australia in the city (its cocktails are large and its beach views are to die for) and the launch of the Gold Coast’s newest cultural district, Home of the Arts (HOTA). Set on 42 acres of parkland, the development is part of a $250 million investment into arts and music on the Coast, with theater, dance, comedy and opera on offer, and a six-level art gallery which opened in May 2021.

The Gold Coast is also now home to some of Australia’s most innovative regional restaurants. In the surf village of Burleigh Heads, eight miles south of Surfers Paradise, Rick Shores is so close to the waves on Burleigh’s world-famous point that the floors are rendered in concrete in order to allow for water to wash through when the tide’s extra-high. You can watch local surfers riding the waves as you sample its pan-Asian dishes for lunch or dinner. Next door, millions has been invested into the Coast’s first beach club, Burleigh Pavilion, with a menu chosen by Michelin-starred chef, Guillaume Zika. 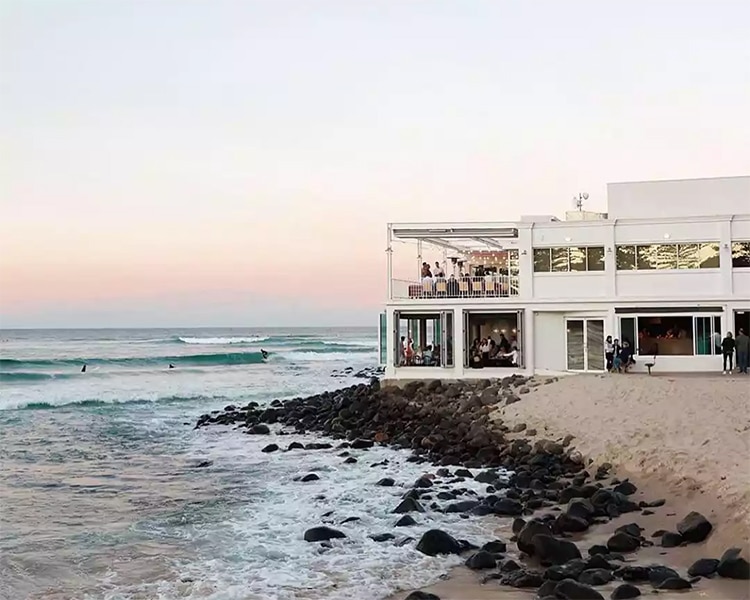 Rick Shores couldn’t be any closer to the water.

It’s the restaurants you have to look for, however, that really epitomize this new sophisticated Gold Coast. I walked past Iku Yakitori Whisky Bar three times before finding the entrance in an alleyway behind. Inside, Japanese chefs cook over hot Binchotan charcoal. Just south (by bus or taxi), The Collective at Palm Beach is a buzzing two-story open-air venue that was once the post office, but now houses five restaurants in one (and a cocktail menu with more than 50 choices). 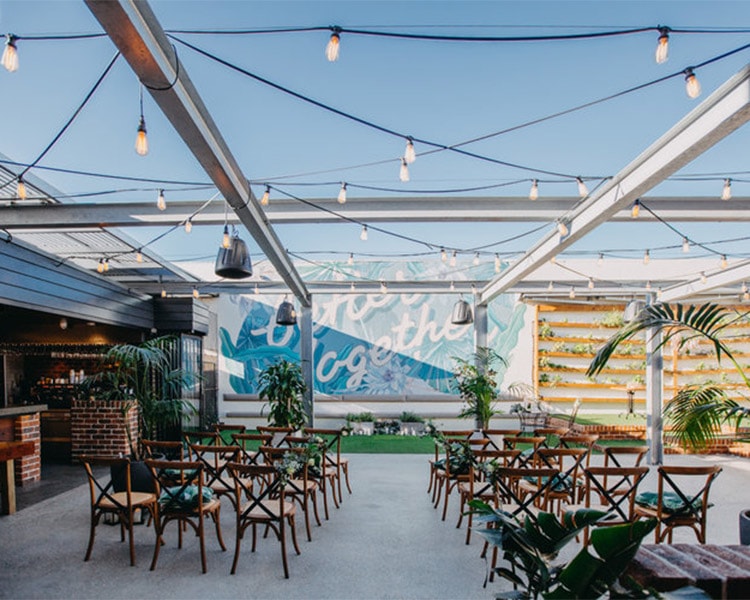 The Collective at Palm Beach is a buzzing eatery. 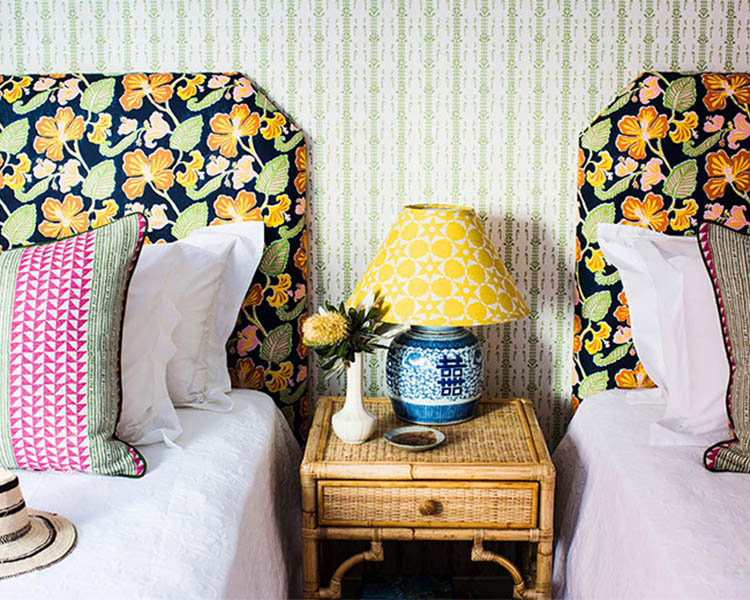 Down the road at Dust Temple in Currumbin Waters (seven miles south of Burleigh Heads), I order a soy latte as a guitar duo strum amongst an art exhibition in a converted warehouse. A few streets away you’ll find Australia’s highest-rated craft beer, Balter, created within a trendy brewery set up by surfing champs Mick Fanning, Joel Parkinson, Josh Kerr, and Bede Durbidge and frequented by surfer-types.

With so much to eat, drink and do, it might slip your mind to give due attention to the beaches in this buzz-worthy region, but you should. The Gold Coast is home to some of the world’s most iconic waves (with more surf schools than any other place in Australia), and they also make a heck of a spot for a swim or some sunbathing. Most beaches are just a short walk from all these hip new restaurants, bars, art galleries and cafes, meaning style on the Gold Coast comes served up with plenty of sunscreen.

Surf the iconic waves of the Gold Coast.