Amazing road trips to explore in the NT 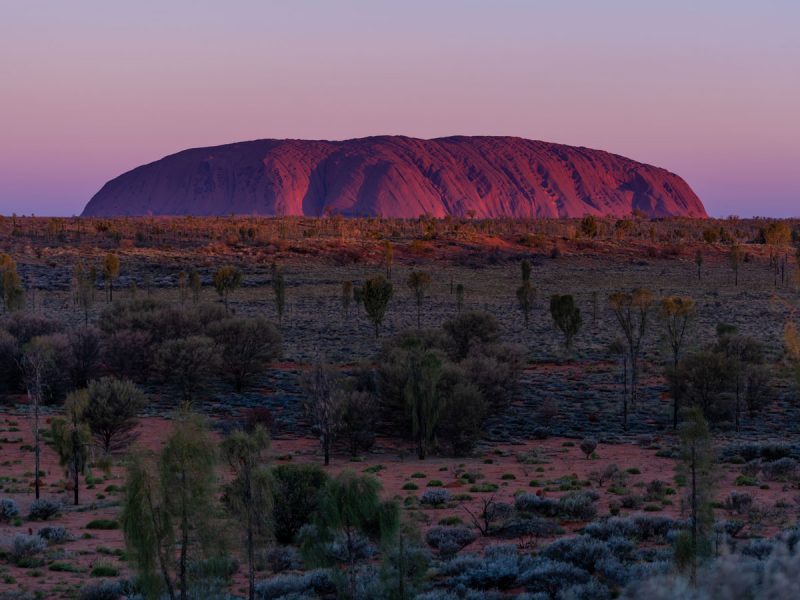 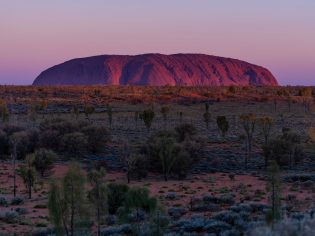 A Northern Territory road trip means experiencing the ancient culture while journeying through breathtaking landscapes, incredible sunsets and the starriest night skies you can imagine. Here are our favourite NT road trips you can’t miss.

Barrelling down red dirt roads that lead to the next cache of jaw-dropping rock art and secret swimming spots, and crossing rivers by driving right through them: a Kakadu road trip might be easily ticked off the bucket list from Darwin but feels like an unforgettable adventure into uncharted territory. 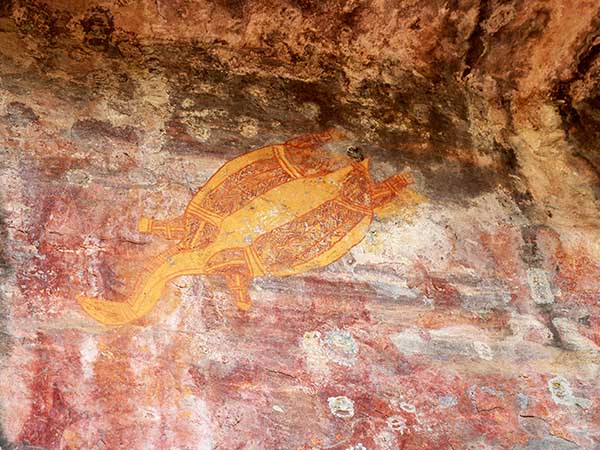 Glamp in one of Cooinda Lodge’s Outback Retreats.

While flying into Kings Canyon’s red-dirt airstrip in the heart of the Northern Territory’s Red Centre affords jaw-dropping aerial views of the arid, russet-toned landscape, opt to leave the dramatic surrounds by road to take in the outback vistas – and the unique experiences it offers – at closer quarters.

The journey from Watarrka National Park to Uluru charts a roughly 325-kilometre course along Luritja Road and the Lasseter Highway, traversing a relentlessly flat landscape that is punctuated with low, tawny scrub that merges with infinite blue skies at the always-elusive horizon.

If setting off from Kings Canyon Resort, take the time to visit Karrke Aboriginal Cultural Experience & Tours (34 kilometres along the Luritja Road), owned and operated by Christine Breaden and Peter Abbott who live on the land of their ancestors in the small Aboriginal Community of Wanmarra (population 10) and proudly preserve and maintain their Luritja and Pertame (Southern Aranda) language. 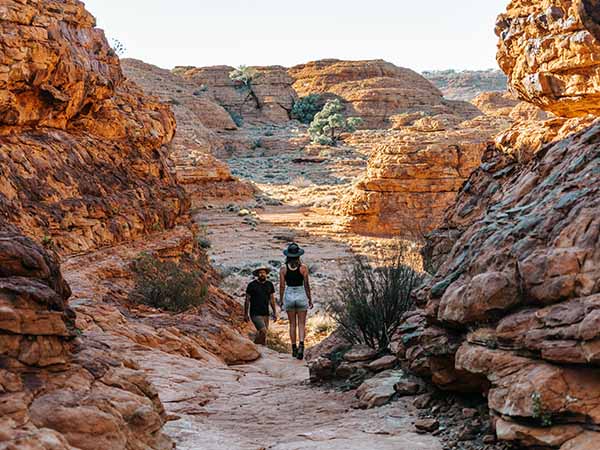 Another 182 kilometres down the road, the roadhouse at the 405,000-hectare Curtain Springs Station (which narrowly avoided being called Stalin Springs in the 1940s in honour of the despotic Russian leader after the then owner’s son objected; they named it after Prime Minister John Curtin instead) is a timely stop to stock up on drinks and use the facilities (signs point out toilets for the blokes and sheilas ) before continuing on to take in the behemoth form of Mt Conner (Atila/Artilla), known as Fooluru due to its habit of foxing uninformed tourists, and the shimmering white expanse of Lake Amadeus. 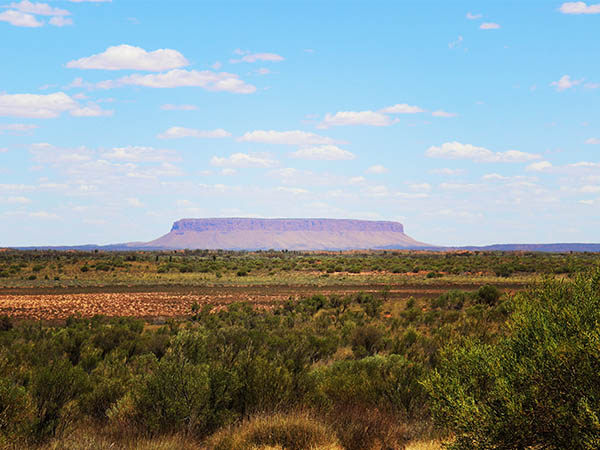 Breathe in the majesty of the outback, punctuated by marvels such as the magnificent Mt Conner (aka Fooluru). (Credit: Tourism NT)

The last leg of the drive to Uluru takes just under two hours, delivering you to one of the world’s true wonders at the end of a truly wondrous journey. 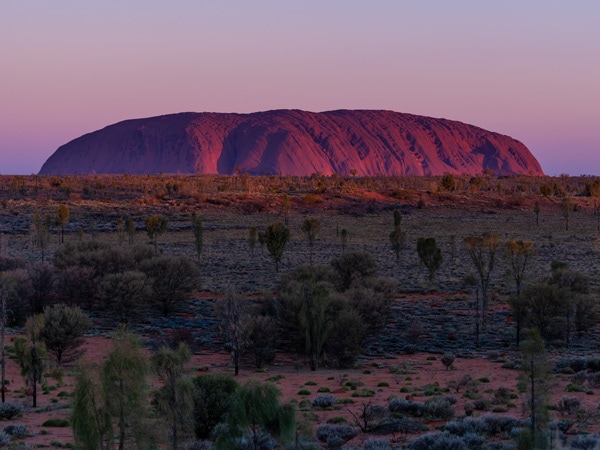 Uluru is not only a spectacular natural formation, but it’s also a deeply spiritual place. (Image: Tourism NT/Che Chorley)

In the Dreamtime Escarpment luxury tents at Kings Creek Station near Kings Canyon and Longitude 131° overlooking Uluru for bookended luxury.

Freedom. The warmth of the sun. Wild waterholes. The expectation has me belting up early for the adventure from Darwin to Katherine. At the one-hour mark I can’t help nipping off the Stuart Highway for a dip at Litchfield National Park’s Florence Falls. 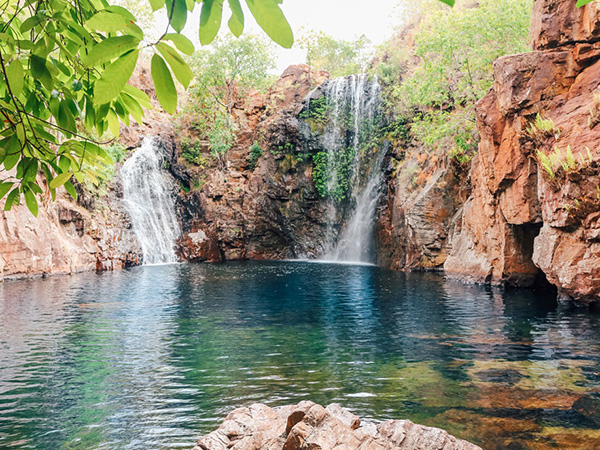 Hair sopping, I roll the windows down and, by the time I pull into Adelaide River’s general store, my blow-dry is complete. I enjoy a homemade veggie pie (worth the trip alone) and cruise for another hour past plains pockmarked with termite mounds to historic Pine Creek.

At the Lazy Lizard Tavern, I admire the mud-brick walls (from local termite mounds) while sipping a lemon, lime and bitters. Next stop is Leliyn (Edith Falls) with its beguiling natural pools, which have hypnotised many an ‘overnight camper’ into not pulling up tent pegs for days. But not this old girl. Post-swim, I swish the last hour down the track towards my ultimate destination – Katherine Hot Springs. 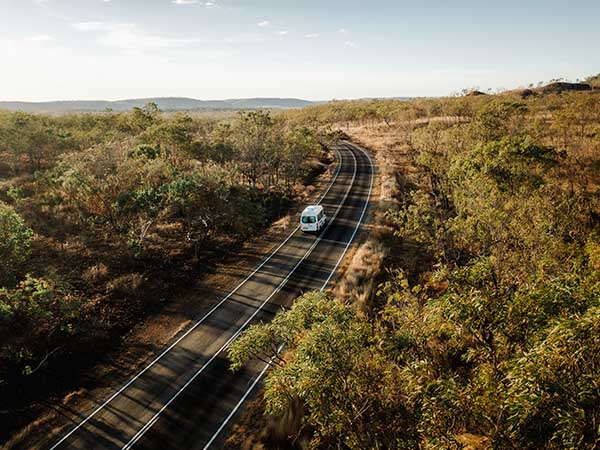 Eco-friendly Cicada Lodge blends in with its khaki-clad surrounds.

Hit the road in the Top End for a 4WD adventure into one of Australia’s last unspoilt areas. The Arnhem Way starts 50 kilometres south of Katherine and heads north-east to Nhulunbuy on the Gove Peninsula. You’ll need a permit from the Northern Land Council to travel here but the extra admin is worth it for your chance to experience the culture and beauty of the region it helps preserve.

The eye-opening journey affords the opportunity to splash in freshwater swimming holes, visit Buku-Larrnggay Mulka Art Centre at Yirrkala, walk through wetlands, stroll the sands of the spectacular East Arnhem Land coastline, and even steal away to eco-friendly Banubanu Beach Retreat on Bremer Island, a 15-minute flight from the peninsula. 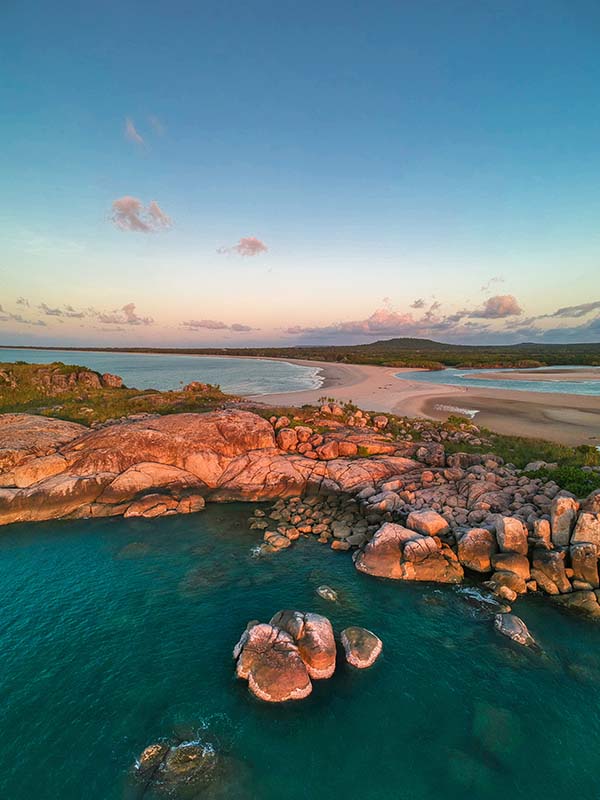 Get straight to the crux of it – the country that is – with Globus on a Gems of the Red Centre journey through the heart of Australia. 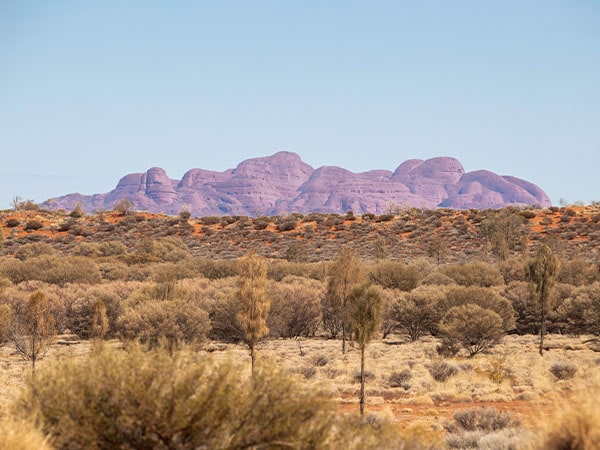 Over six days, this small-group discovery tour (its average of 20–24 people per departure promises room to roam and up-close-and-personal experiences along with the benefit of letting someone else drive) travels by coach from Alice Springs to Uluru via Kings Canyon, taking in all the highlights and more: from an interlude at West MacDonnell Ranges’ stunning Standley Chasm Angkerle Atwatye to spectacular canyon walks to the medley of unforgettable experiences that await at Uluru itself. 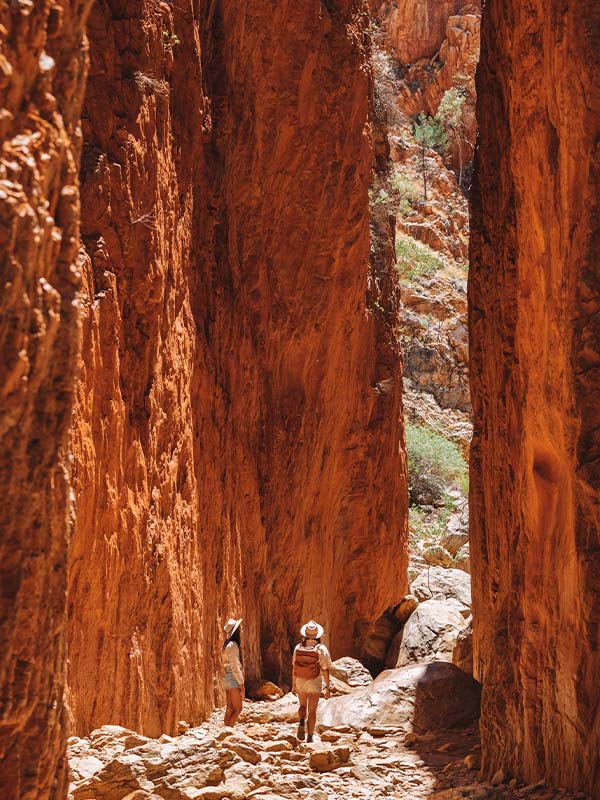 Lace up your hiking boots and take in the magnificent geology of Australia’s red centre. (Image: Tourism NT/Salty Aura)

Clocking in at an epic 2230 kilometres, the Binns Track (named for ranger Bill Binns, a 32-year veteran with NT Parks and Wildlife) is the kind of road trip that reminds you just how vast and untamed much of our country is. 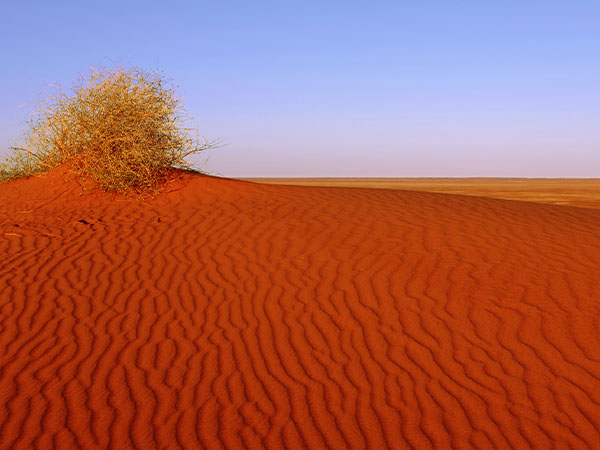 Revel in the rich reds of the earth in a journey into the heart of Australia. (Image: Tourism NT/Steve Strike)

The journey charts a course through the Central Australian landscape, from Alice Springs to Timber Creek, taking in Gemtree, Tennant Creek and Dunmarra along the way. And then there’s the scenery: a seemingly infinite sweep of rich ochre sand that only nature could make so perfect. The drive is 4WD all the way, so let professionals like Outback Spirit do the hard work while you take it all in over 13 unforgettable days. 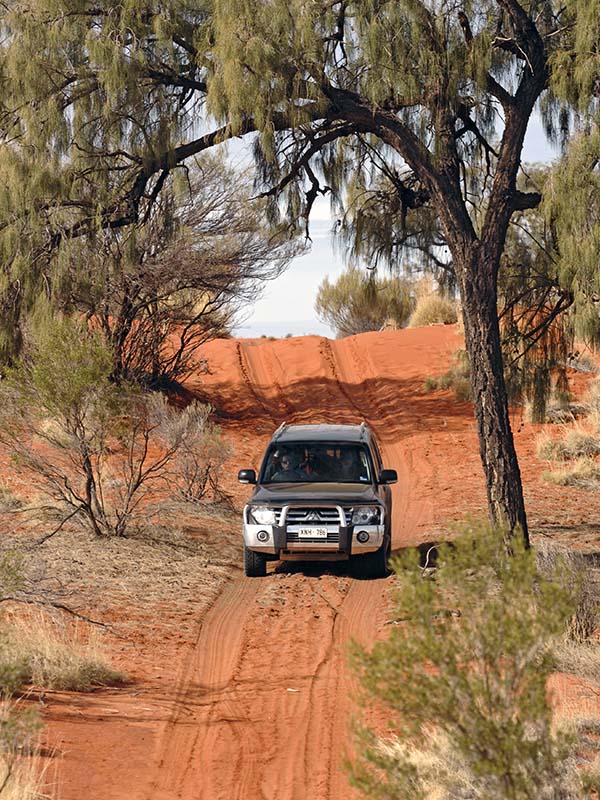 Kick back as your tour guide navigates through the unforgettable scenery of the Central Australian landscape. (Image: Tourism NT/Steve Strike)

There are myriad reasons that Darwin is an amazing place to live, top among them is having a national park as dramatic and diverse as Litchfield as its backyard. A 90-minute drive from the Northern Territory capital, the sights within this national park of some 1500 square kilometres are enough to fill a month’s worth of day trips. Heading out of the city take National Highway 1 and aim for the town of Batchelor, the gateway to the park and all its wonders. And when you are ready to head back, take the B30 via Tumbling Waters and Berry Springs to complete a scenic loop. 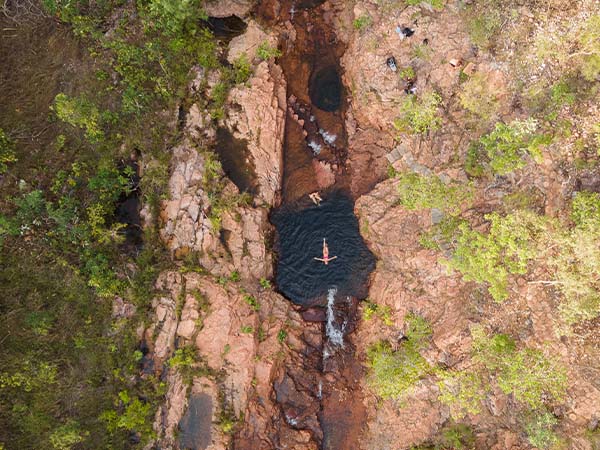 Cool off in the cascading pools at Buley Rockhole. (Image: Tourism NT/Backyard Bandits) 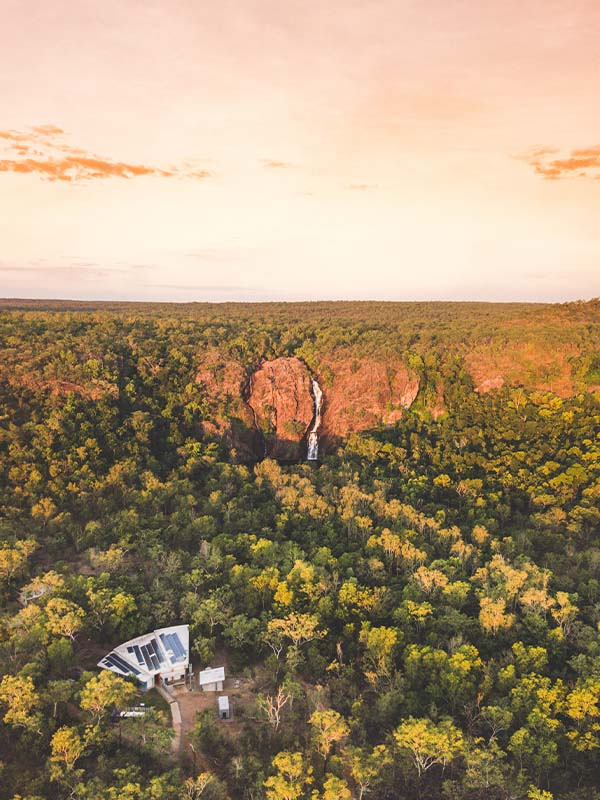 You’ll be spoiled for choice when it comes to waterfalls in Litchfield National Park. (Image: Tourism NT/Dan Moore )

Book a tour with Matt Wright’s Top End Safari Camp for bucket-list Litchfield experiences and a night in a luxury glamping tent in the Peninsula Way region, northwest of the park. 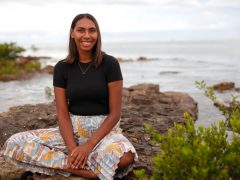 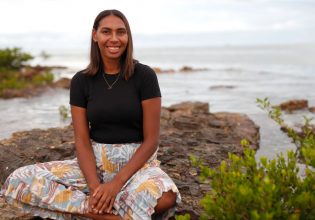 Liandra Gaykamangu: “My swimwear is an extension of what I care deeply about”

For a snapshot in time, we asked eight people around the country to reflect on Australia Now. Here, Liandra Gaykamangu, Creative Director & Founde... 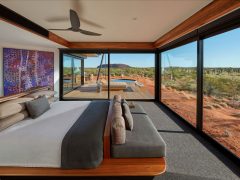 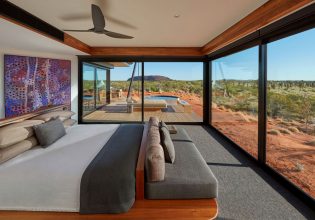 Unique stays in the Northern Territory

Discover the most unique stays in the Northern Territory... We've revealed our pick of 100 unique stays across Australia and below you'll find the ni... 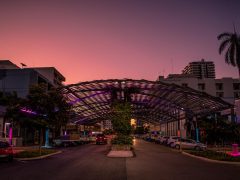 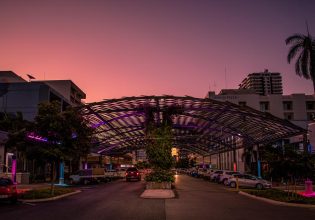 The best things for teens to do in Darwin

Recline in a deckchair to catch a movie, check out the vibrant street art scene and get up really close to the NT’s most famous inhabitants, its cro... 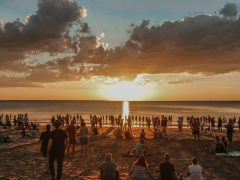 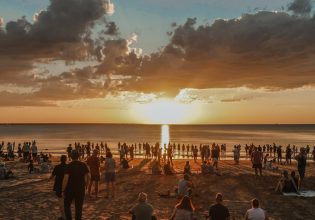 The perfect Darwin itinerary for families

Famously Compact, Darwin is not only easy for families to get around, it's entirely possible to enjoy its 'best of' attractions in little more than a ... 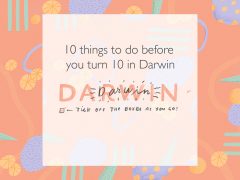 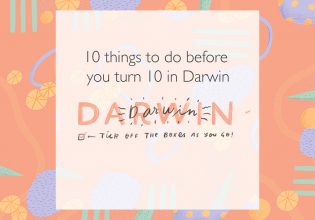 10 things to do before turning 10 in Darwin

Don't let the city's laid-back vibe tropical atmosphere fool you; when it comes to a healthy list of family-friendly activities, Darwin leads the char... 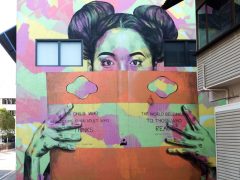 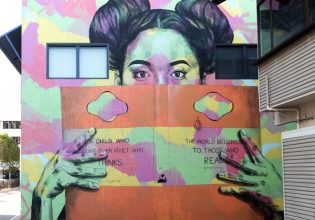 A family guide to where to eat, stay & play in Darwin

Your go-to guide to Darwin’s best places to eat, sleep and top things to do with kids. EAT | STAY | PLAY Where to eat in Darwin with kids Wharf O...