10 of Australia's most incredible outback walks 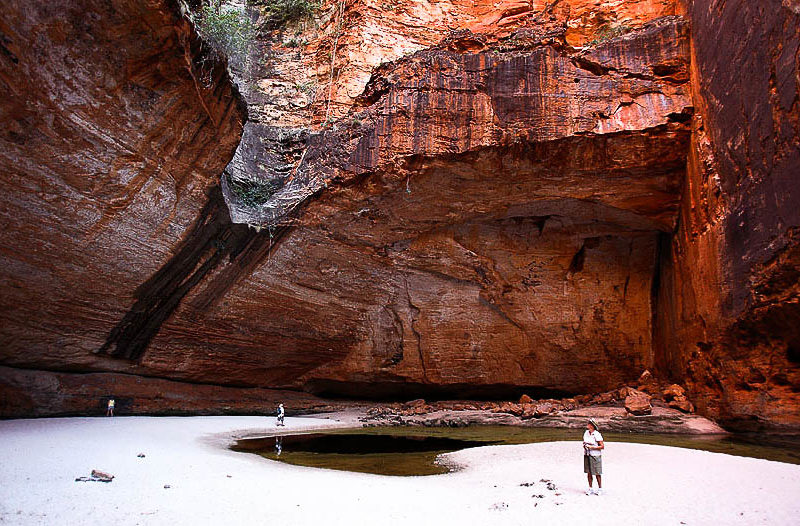 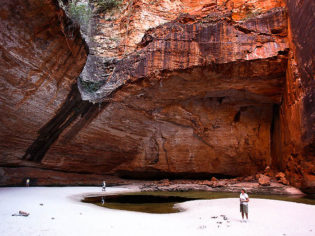 It’s not often you get to marvel at our landscape on foot.

Here are 10 outback walks through our very own backyard that have people talking.

One of the seven Great Walks of Australia, The Larapinta Trail winds through the rugged and ancient landscape of the Northern Territory starting from Alice Springs and ending at Mt Sonder, the highest point of the trail. 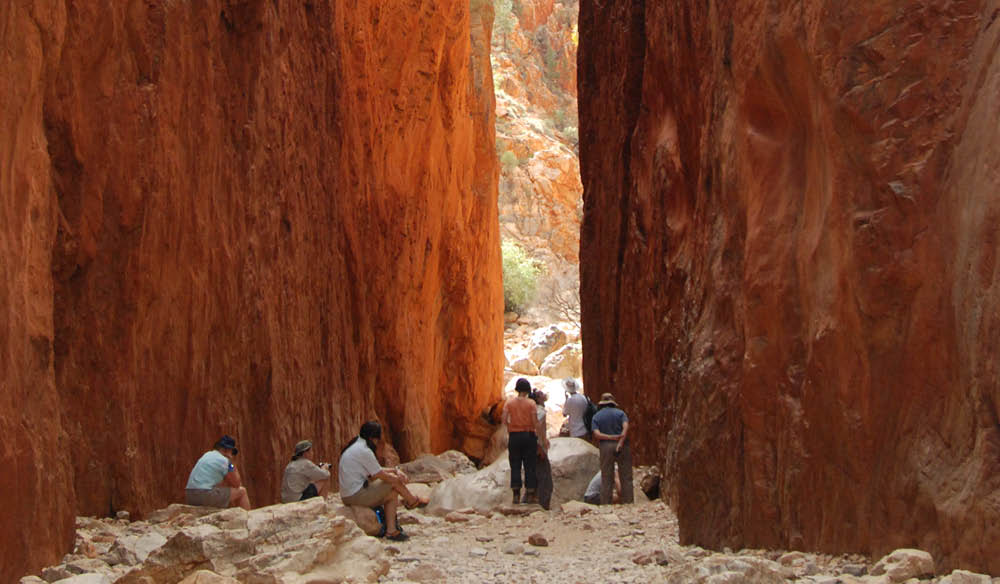 The trail is divided into 12 sections, each a day or two walk and of varying difficulties. You can join or leave from all sections as they are all accessible by vehicles. Australian Walking Holidays runs a six-day round trip from Alice Springs, which includes accommodation in their exclusive semi-permanent campsites equipped with creature comforts such as hot showers, comfortable lounges, soft bedding and heated shelters; a welcome retreat on cool nights.

Trekkers need to be reasonably fit with up to 16 kilometres being covered each day.

Midway between Uluru and Alice Springs is the ancient Kings Canyon – created over many millennia by water and wind erosion, it is a breathtaking sandstone chasm that plunges 270 metres. 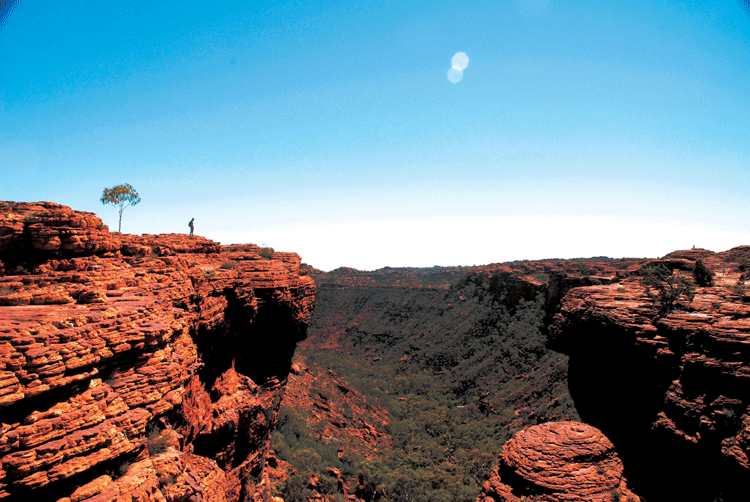 The view from the top of the Kings Canyon Rim Walk

The Aboriginal people have called Watarrka National Park home for more than 20,000 years and some parts of the park are sacred aboriginal sites. The three-hour walk showcases magnificent red landscape contrasting with rock pools, green gullies and abundant native flora and fauna.

The six-kilometre Kings Canyon Rim loop begins with a 500-step climb – but hang in there, the rest is quite flat. From the summit, admire the view of the 100-metre-high sheer cliff walls of the canyon and views over the national park.

The walk descends into the Garden of Eden, a green oasis of cool waterholes and riverine vegetation. AAT Kings runs daily guided walks to Kings Canyon at sunrise, when the canyon is at its most spectacular. Walks depart from Kings Canyon Resort, Alice Springs and Ayers Rock Resort.

Thirty-two kilometres west of Uluru lies Kata Tjuta (the Olgas), which many find just as, if not more, captivating than the big red rock itself. 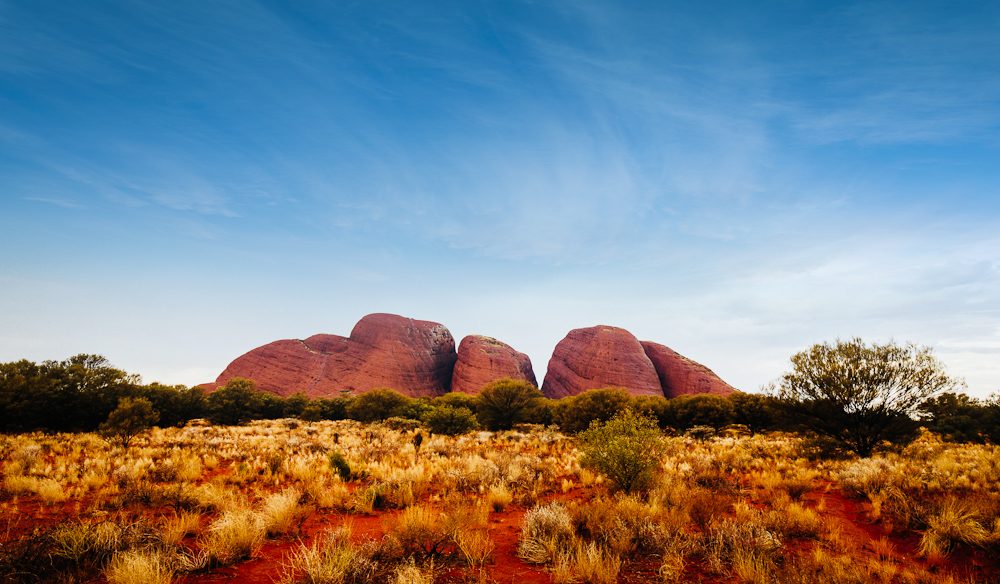 In fact, it is believed that they were also once a singular formation, but due to millions of years of erosion they have broken down into a cluster of smaller domed rocks that form small valleys and gorges. Not that they are particularly small – the largest is actually 546 metres tall, which is around 200 metres higher than Uluru.

The main walking track here is Valley of the Winds, a 7.4-kilometre loop that traverses the desert terrain with varied viewpoints of these formations. AAT Kings runs daily afternoon tours from Ayers Rock Resort, where guides will tell creation stories that have been passed down through generations of the local Anangu people.

As the tour ends, the sun sets a fiery red glow upon the sacred site, which can be admired from the viewing area with a glass of sparkling wine.

Gecko Canoeing runs this 50-kilometre walk to the remote heart of southern Kakadu, undertaking a completely unmarked trail navigated with maps and a compass. It is a challenging walk suited to those who have had bushwalking experience and are of good fitness. 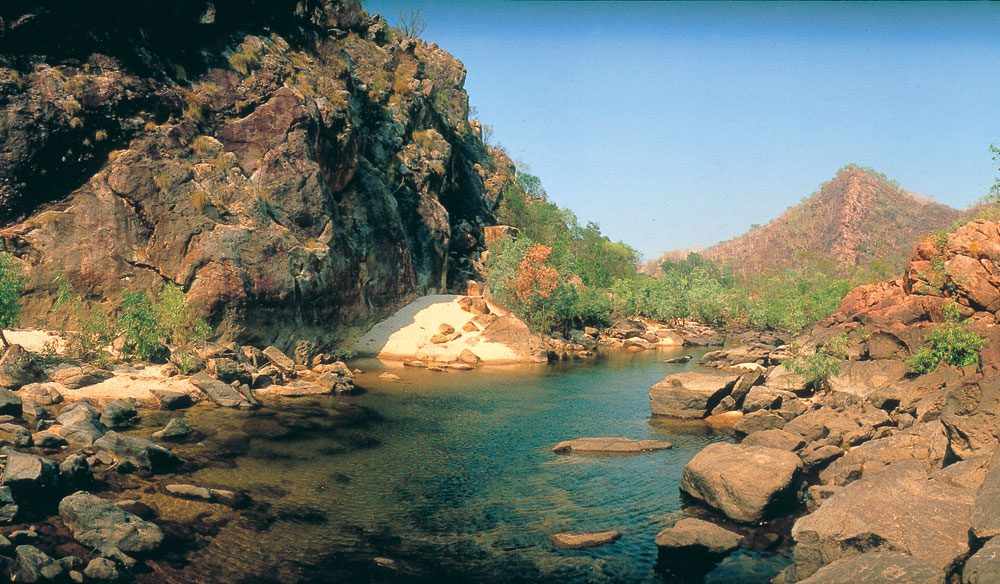 Passing through highland creek country, hillsides dotted with dry eucalypt and escarpments that overlook Kakadu, the trail follows Koolpin Creek to the tranquil Koolpin Gorge, regarded by some as the ‘Jewel in the Crown of Kakadu National Park’.

Crossing a plateau, the trail joins up with Twin Falls Creek and, on the final day, the cascading Twin Falls. Along the way there is plenty of local flora and fauna to spot as well as some great Aboriginal rock art sites. Each afternoon is free to relax, swim and explore the area around the campsites.

This challenging five-day trek with Australian Wilderness Adventures goes beyond the well-known Larapinta Trail on a largely unmarked route covering rough terrain. The first six kilometres are taken on Section 9 of the Larapinta Trail before veering off course through the Heavitree Range towards Mt Giles, the third highest peak in the West MacDonnell Ranges.

With two experienced guides, the group will set up camp each night, from which they can explore the varied landscape of lush green cycads, stunning gorges and hidden caves. It also means that full packs – which are to be carried by each person the entire time – can be left at camp for the climb to the summit of Mt Giles. The climb is a long but extremely rewarding one, not only for its stunning views but because very few have set upon it.

The final days include journeying through Ormiston Pound and its spectacular Ormiston Gorge, which is the end-point for the trek and where the group is picked up for the transfer back to Alice Springs. An ideal option for those more experienced trekkers who want to explore further into the wide arid desert of central Australia.

This eight-day guided walk with Auswalk covers a vast distance through varied landscapes of rainforest, mountainside and sandstone gorges. 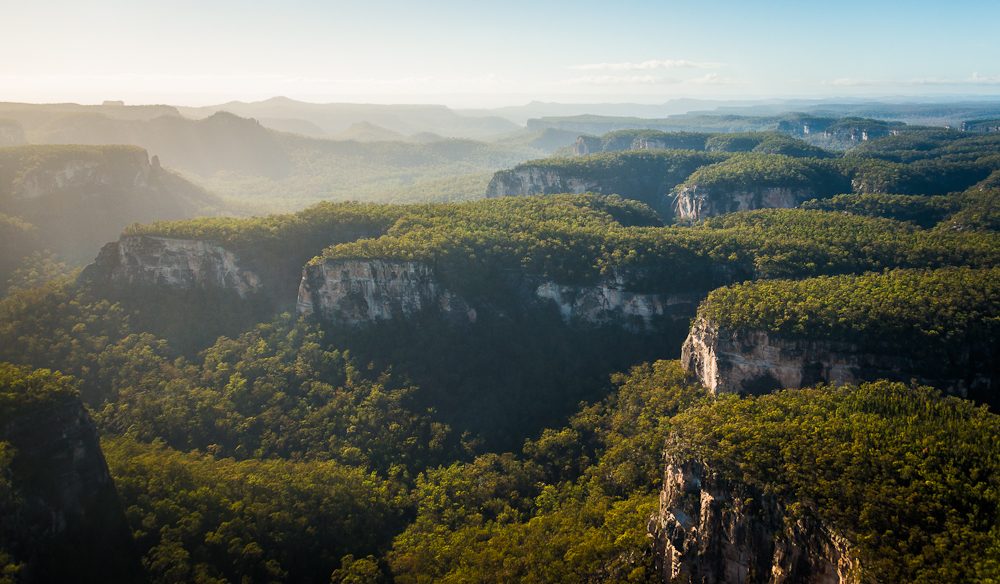 After a three-hour drive west from Brisbane, the tour starts with a full-day of walking through the Bunya Mountains where there’s a collection of stunning sights from trickling streams to cascading waterfalls and dense rainforest to panoramic lookouts.

Heading further north by road through pastoral lands, the tour continues through rocky Cania Gorge to explore this sandstone wonder and its ancient hidden caves and canyons whilst tackling some challenging trails and climbs.

With comfortable cabin-style accommodation and several different walking options offered on most days of the itinerary, the tour is suitable for adventurous hikers as well as those who wish to take the tour at a more relaxing pace.

The remote Kimberley area is steeped in history and blessed with breathtaking natural beauty and pristine land. This round-trip from Broome with Park Trek follows the famous 660-kilometre Gibb River Road and combines the comfort of a 4WD with plenty of walking in between. 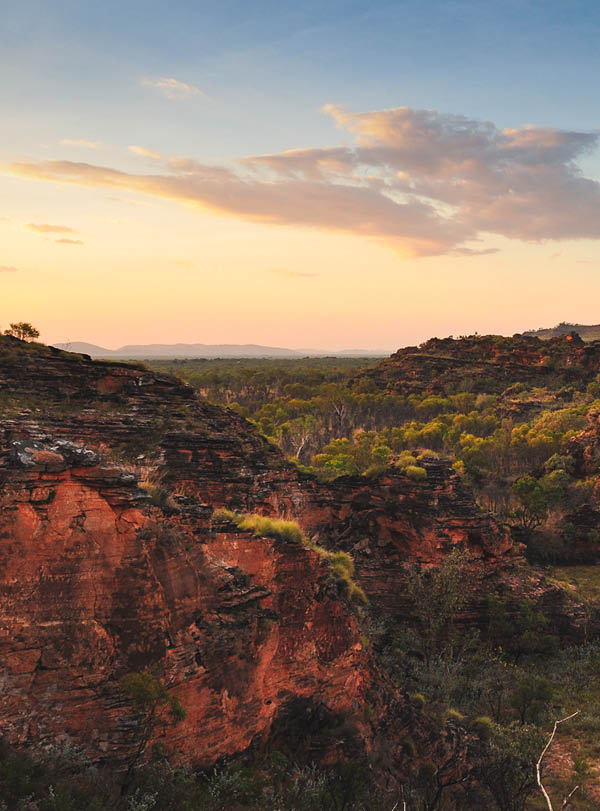 The Kimberley never looked so good.

At times it can be challenging, particularly with the heat, however the walking is broken up by many stops at spectacular swimming holes to recharge and cool down – Bell Gorge and waterfall, Manning Gorge and Emma Gorge to name but a few. The driving portion is kept interesting with the stunning landscapes that pass by, from the magnificent sandstone escarpment of the Cockburn Ranges to the iconic crossing of the Pentecost River.

Other highlights of this Parktrek walk include the Zebedee Hot Springs that boast clear, thermal waters; the timeless rock art along the Manning Gorge walk; and the orange and black striped mounds of the Bungle Bungle Ranges. There’s also a few optional extras including a scenic flight over the Mitchell Falls Plateau. The camping spots along the journey are a mix of basic remote sites to the superb El Questro Wilderness Park.

This nine-day walk was initiated in 1987 by Paddy Roe – respected Aboriginal elder, leader, storyteller and recipient of the Order of Australia medal – as a means to encourage members of the Goolarabooloo community to walk their country again; to stay connected with their heritage and keep traditional skills alive.

Starting at Minarriny (around 80 kilometres north of Broome) and ending in Minyirr, the 82-kilometre trail follows the land of the traditional Song Cycle – songs passed down through generations as detailed descriptions of the land and how it has been shaped.

Many of the special places in these songs are passed on the trail. Taken at a slow pace, and with gear being transported between campsites, the main objective of the trail is to experience the living country, which is made up of long stretches of coast, reef, dunes, rugged bush, mangroves and salt plains.

Passing indigenous midden-rich landscapes, the guides share stories of their Dreamtime, explain how native flora contributes to traditional tucker and medicines, and demonstrate how to make traditional tools. The trail also includes the area of James Price Point, where the infamous gas plant proposal was negated (for now) due to rigorous and successful protests. Contact goolarabooloo.org.au for prices and dates. 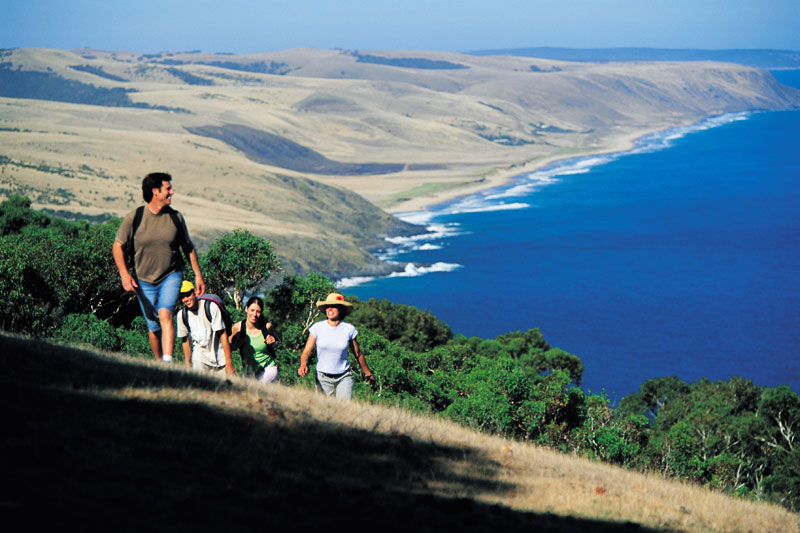 The Deep Creek Conservation Park at the coastal end of the Heysen Trail.

Serious (and we mean serious) hikers can walk the whole 60-day trail, while the sane among us can stick to shorter sections. Perhaps the most intriguing parts of the trail are those in the North Flinders Ranges – the semi-arid landscape of South Australia’s outback.

Australian Walking Holidays runs a six-day round trip from Adelaide with accommodation based in unique outback properties like homesteads and shearers’ quarters. Making tracks to Wilpena Pound, climbing St Mary Peak, winding through Bunyeroo Gorge and traversing an 18-kilometre trail into Parachilna Gorge, the itinerary is brimming with rugged ridges, majestic peaks and forests of cypress pines. The trail is moderate in difficulty, made comfortable by well-appointed accommodation.

The cost is $2495 per person including most meals, entrance fees and transport from Adelaide.

Park Trek runs a six-day tour that comprises several treks to admire the vast landscape. The first day’s journey from Adelaide is a long one but interjected with welcome stops along the way such as the quaint town of Red Hill and an eight-kilometre hike – the first of many – to stretch your legs in Dutchman’s Stern Conservation Park, just outside the town of Quorn. Other walks over the six days include a 13-kilometre circuit in the Vulkathunha-Gammon Ranges National Park, home to the 100-kilometre-long Lake Frome; a 10-kilometre walk through the deep, stark gorges of Tillte and Bararanna; and the five-kilometre Acacia Ridge walk.

With the number of walking tracks included in the itinerary, there are many opportunities for bird watching – over 160 species have been recorded in the area – and to explore the native flora. But the immense rugged scenery is hero and because it is so remote, it’s a special place very few have been lucky to explore. The cost is $2520 per person including 4WD transport, camping, most meals and national park fees.