The best city breaks in Australia this summer 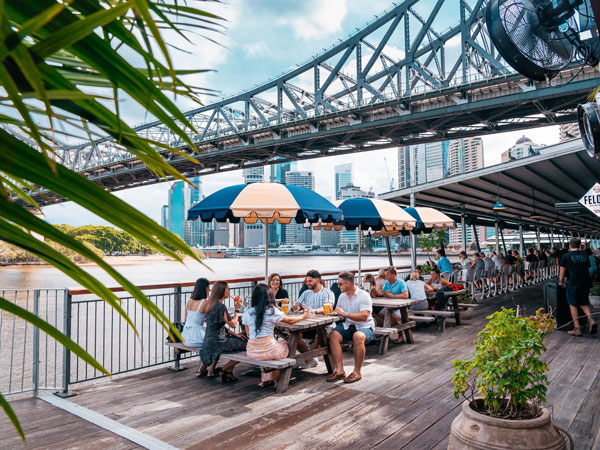 Brisbane is holding its own alongside the usual big-ticket capitals this summer. (Image: Tourism & Events Queensland)

The quintessential Australian outback is a sight to behold. Australia’s golden beaches are among the best in the world. But it would be a big mistake to overlook this country’s urban credentials. Here, the top Australian city breaks to help your summer sizzle.

Yep, Melbourne gets top billing. Not only is Victoria’s capital an absolute must on any list of city breaks – Australian or otherwise – but after a turbulent battle with COVID-19 and its varying restrictions, Melbourne needs and deserves our support. So, let’s go!

Explore the street art of Melbourne on Hosier Lane.

For the vibrant culture and destination dining; for the gritty laneways and sun-soaked rooftop bars; for the endless shopping and crammed events calendar; for the absolute love of this world-class city brought to a devastating standstill in 2020.

Line up at Lune Croissanterie for one of their world-famous pastries.

With its pretty-as-a-picture waterfront precinct as your backdrop, Geelong is a summertime treat. While Victoria’s second-largest city, Geelong has long been seen as a handy launch pad for the magical Great Ocean Road and Bellarine Peninsula, it’s also worth exploring in its own right.

The Geelong foreshore is a main attraction.

Visit the waterfront and learn about Geelong’s rich history with a stroll along the famous Bollard Trail. The city’s creativity shines elsewhere, too – there is the Waterfront Art Trail, galleries and museums, Geelong Performing Arts Centre and Melbourne-esque street art. And you certainly won’t go hungry. Little Mallop Street in particular is a hub of great eats and trendy bars, while Geelong is also home to one of Little Creatures’ two breweries. Stay on the water at Novotel Geelong or for architectural wow points, try The Warehouse Geelong or Devlin Apartments.

Little Creatures Brewery is the perfect spot for a craft brew and pub feed.

A charming waterfront, a strong sense of history and abundant natural beauty are among Hobart’s hallmarks, while the city’s culinary scene is a delicious celebration of local produce.

The serene Hobart waterfront is a sight to behold. (Image: Tourism Tasmania/Kathryn-Leahy)

Fico, Dier Makr, Willing Bros Wine Merchants are a few faves, or find a spot to dine among the galleries, theatres and markets of Salamanca Place. Peacock and Jones is another gem, which you’ll find in the Henry Jones Art Hotel, a truly chic stay on the water.

Fico is one of the many top-notch eateries to try in Hobart. (Image: Osborne Images)

Drink connoisseurs will be satiated by local craft beer and whisky. And what is a trip to Hobart without a visit to MONA? Love it or be perplexed by it, the Museum of Old and New Art is quirky at the very least.

Brisbane’s standing as a big country town is long gone. A hotel boom, burgeoning dining scene and growing events schedule has helped complete this coming of age story and now the River City is holding its own alongside the usual big-ticket capitals.

Elsewhere, West End and Fortitude Valley are cultural hubs. Stay at The Calile, an Instagram-friendly subtropical oasis in the thick of Fortitude Valley, or one of the city’s two Ovolo hotels, Ovolo The Valley or Ovolo Inchcolm.

The City of Churches isn’t as demure as the moniker might suggest, bursting with culture, flavour, world-class events, and an atmosphere that is only bolstered by those long summer days. Australia’s largest open-access arts festival, Adelaide Fringe (19 Feb – 21 March 2021), is a major summer drawcard while the Adelaide Central Market is a year-round attraction.

Tasting Australia is just one of many world-class events to attend in Adelaide.

The city’s dining scene is hyped for a reason (put Osteria Oggi, Africola and Shobosho on your shortlist) and a visit to the beachside suburb of Glenelg is a must. You can also feel the sand between your toes at The Moseley Bar & Kitchen’s Beach Club.

Feel the sand between your toes at The Moseley Bar & Kitchen’s Beach Club.

Newcastle has been steadily building its reputation as a serious big-city contender over the past decade or so. Just two hours from Sydney, the once working-class city is now home to smart cafes, pubs and bars, fantastic boutique shopping, and a vibrant creative scene, which has ‘cosmopolitan’ written all over it.

Hit the pavement and explore the streetscapes of Newcastle. (Image: Destination NSW)

For all of the above, hit up the village vibes of the popular Darby Street precinct. Newcastle Memorial Walk along the clifftop is a beautiful spot to take in the summer rays. Continue enjoying those sweeping harbour views at Rydges Newcastle or set up in the thick of things at The Lucky Hotel.

A sparkling diamond, or emerald as it were, Sydney is quite simply an impossible omission on such a list. Omission Impossible, you might say.

Bondi is one of a handful of uber trendy suburbs in Sydney’s east. (Image: Destination NSW)

Head to the centre of town and you can tick most of these off, but you could also spend your break in the grungier Inner West, the picturesque Northern Beaches, the trendy Eastern Suburbs and be spoilt for choice when it comes to first-rate dining, culture and events.

As far as summer playgrounds go, it’s hard to beat the Western Australian capital. The sand and surf blend effortlessly with the city’s urban energy, where restaurants, bars and creative arts thrive.

As far as beaches go, Cottesloe is the star and The Cottesloe Beach Hotel will sort you out with a crisp summer schooner.

Island Market at Trigg Beach has summer written all over it and, in Fremantle, you’ll find it easy to settle in at Bathers Beach House.

Fremantle is also a must: in addition to being packed with history, it’s a hub for eateries and bars. And don’t miss Kings Park and its splendid views. From Perth, both Rottnest Island and Swan Valley make for fab day trips.

Visit our Reclaim Summer hub for more ways to experience the best of summer.

14 trips to take to help Australian communities in drought

If you’re looking for drought-affected communities you can inject some much-needed tourism dollars back into, consider a #holidayherethisyear. Part...

If you’re looking for fire-affected communities you can inject some much-needed tourism dollars back into, consider a #holidayherethisyear. The Chr...

The best ways to holiday here this year in ACT & Australia

Get acquainted with Australia’s island paradises

Find all 100 ways to holiday here this year

Discover the 100 ways to holiday here this year. Start planning your next Australian holiday by reading our 100 by experience. Coast Here is one to...

The best food and wine holidays in Australia

Discover the best food and wine holidays in Australia – here is 68 to 81 of the 100 ways to holiday here this year. 68. Sample the dynamic food and...