Is this a sign that Canberra can out-Hollywood Hollywood? 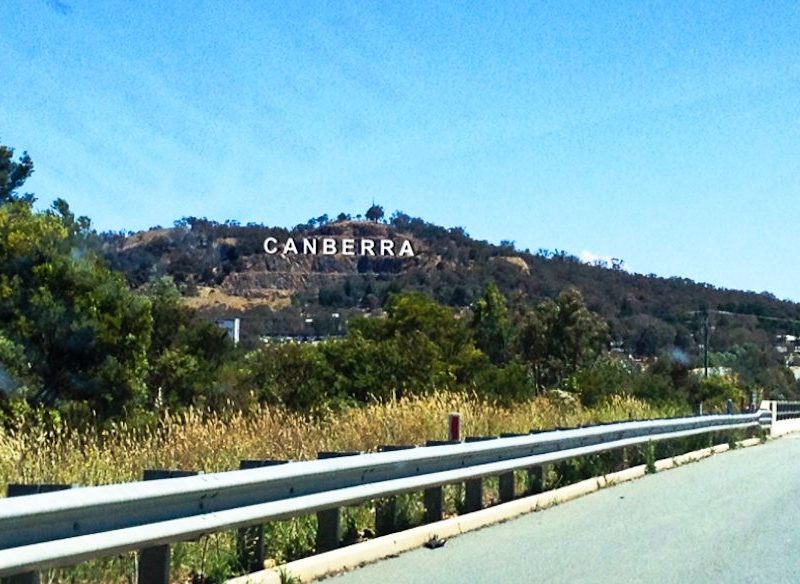 Nothing shouts ‘Canberra isn’t boring’ like a 14-metre high, Hollywood-style sign that is proposed by one tenacious ACT local.

New Jersey-born Alicia Doherty is driving an ambitious idea to construct a corrugated steel sign that will spell out ‘CANBERRA’ on an entire tier of a disused quarry on Eagle Hawk Hill, facing the Federal Highway as you drive into the capital from Sydney, two kilometres on the NSW side of the border.

“A lot of people were saying Canberra hasn’t got a real sense of arrival and this would certainly change that,” says Doherty. “When my husband and I first moved to Canberra we were doing a lot of travelling back and forth, because he is a Sydney boy, and every time I drove past this huge quarry I thought it was just screaming out for a sign.”

The Canberra Times’ Tim the Yowie Man has described the capital’s current ‘sense of arrival’ by road as having “as much ‘wow factor’ as taking a packet of milk arrowroot biscuits to a dessert party.”

Doherty believes the sign will represent much more than just a fancy welcome.

“There’s been an ongoing debate about how boring Canberra is but that’s really just coming from ill-informed people,” she says. “I’ve lived all around the world and Canberra has a great quality and way of life.”

“This will be a good way to reflect the personality and energy of Canberra today – and so many businesses and community groups can get involved with it.”

The project is at the “can we do it?” stage, but the site has already been secured, free of charge, thanks to the former quarry’s owner, Lorenzo ‘Laurie’ Pastrello. He was so excited by the idea of the sign that he promised: “if you can make it happen, you can use the land.”

Doherty is currently exploring ways to fund the project that will not rely on government funding, approaching various groups for support to build the sign and exploring corporate and community sponsorship of individual letters (for example, the capital’s rugby union team, the Brumbies, could sponsor the ‘B’). The Canberra-phile also wants to run an ACT-wide competition for the design.

But even in its nursery stages the concept has copped criticism, particularly about the sign’s perceived lack of originality.

“Sure, it’s big, it’s on the side of a hill, and a lot of people will see it, but we’re not just copying Hollywood,” counters Doherty. “It’s an artwork; the letters will have some elegant design to them [complete with proposed high quality lighting system and landscaping].”

As she pushes through the approval, Doherty hopes the support from the community continues and she is optimistic that Canberra’s new welcome mat can be rolled out by March 2015, all going well.

Is it a great idea or thumbs down for the new sign? Email us (webeditor@australiantraveller.com) with your comments.

Or contact Alicia Doherty directly (email: mycanberrasign@gmail.com or Twitter: @MyCanberraSign) to show support and give your input.