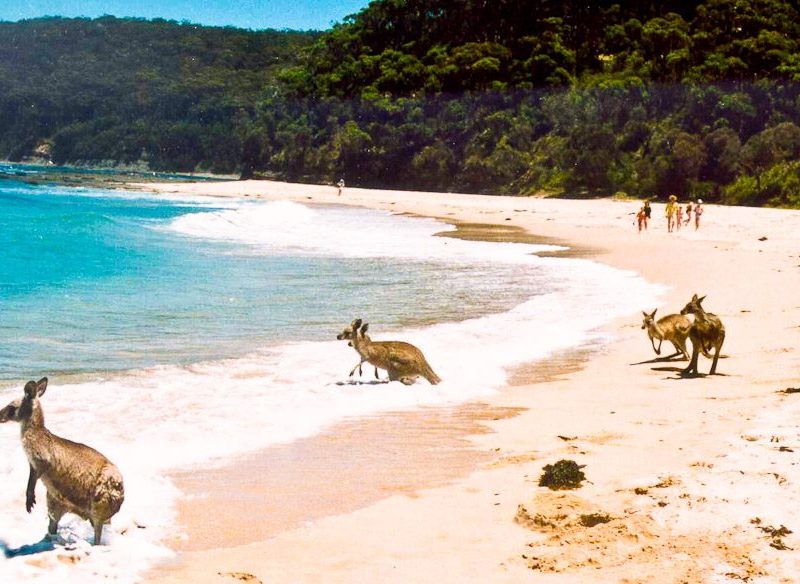 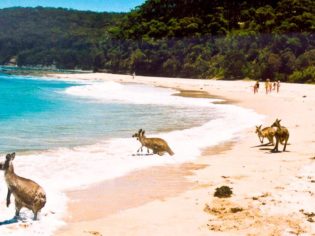 One of the 100 most important things to do: watch surfers at some pebbly beach? Are we joking? Well, it turns out we’re not. Because these natives are real natives – 70 resident roos to be precise. And on very hot days (the days you should plan to be there), they go surfing. (Without boards, you understand. They jump about and frolic in the surf.)

As far as we’re aware, this is the only reported place in the country – and, no doubt, the world – that they do this. Must be something in the local food sources.

“Could there possibly be anything more Australian?”
– Catriona Rowntree

You’ll see this remarkable event, if you’re lucky, at Pebbly Beach, a delightful stretch of sand in Murramarang National Park between Ulladulla and Batemans Bay on the NSW south coast. And if you do know of another spot in this wide, weird, brown land of ours where roos take to this sort of behaviour, please let us know.

Did you know?
The best-selling postcard at the Sydney 2000 Olympic Games was of a surfing kangaroo.

How to get there
Pebbly Beach is in Murramarang National Park, which is a 3.5-hour drive south from Sydney or 2 hours east from Canberra.

Best time to go
Anytime, but if you want to see kangaroos frolicking in the surf summer is your best bet.

You don’t have to go far to sit in a kayak and paddle around but Solveig Walkling discovered why making the trip down to Batemans Bay for a paddle...