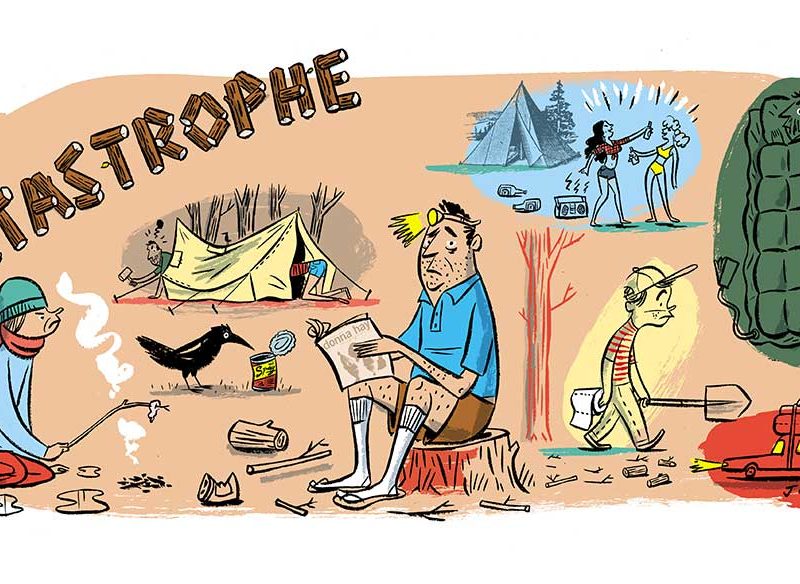 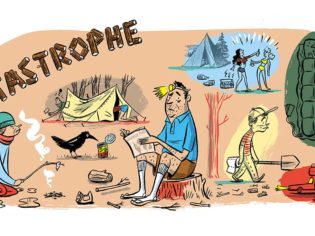 I blame my wife Jane’s recent issue of Donna Hay magazine. In it, an utterly gorgeous family wearing pristine white clothes and framed by brilliant shards of morning sun is captured scoffing a delicious meal at their elm grove-surrounded campsite, all shot with Vaseline-lensed sensuality.

Consider yourself the outdoors type? Got the sudden urge to lace up your boots, don a floppy hat, buy a tent and pitch it somewhere? Well, don’t say we didn’t warn you . . .“Okay. We’ll try camping,” we thought.

About a thousand bucks’ worth of equipment later, we headed out on the sort of “cheap” holiday that I’d been working extra jobs for 20 years to avoid.  Am I not “the outdoors type”, then? Well, consider this: When Jane told her friends I was taking the family camping, their reaction was outright derision. I’m the guy who broke his nose climbing up the wrong side of an inward-folding extension ladder.

But if that sap in Donna Hay magazine can do it, well… ..

Sadly, we were to discover this photo could not have been taken at our Easter weekend destination, a little camping ground at Indented Head, on Victoria’s Bellarine Peninsula. Whilst its beachfront setting was indeed beautiful, and I heartily recommend it, “Indented Head” may well have been named for its inhabitants, rather than its topographical characteristics. These are people who for three decades have been coming all the way from Clifton Springs, which is about 20 minutes away. And no-one wears white. That wasn’t the only thing I learned. My three days were filled with “wear your thongs in the shower”-type revelations…

After watching us drive endless laps of the campsite like a bunch of New Year’s Eve hoons in slow motion, everybody in the camping ground knew we had no idea where the hell we were supposed to pitch our tent. We needed guidance. And co-incidentally, whenever we needed guidance, one of the “locals” just happened to be walking past on their way to the shower block: “I think you’ll find that’s your spot over there – number 39.” Of course … the little white bricks are numbered. And of course, it was the only spot in the camping ground not taken up by someone from Clifton Springs.

DON’T TRY TO BE PYTHAGORAS

It was our first attempt at putting up a tent. It was raining. The kids were restless. We were trying to work out the angles. We had tent material from arsehole to breakfast. To say this was a “watershed” moment is an understatement. But then up popped a local: “I think you’ll find the label goes to the front.”

A good night’s sleep is vital, and we were ready. We had air mattresses. But we should have checked that each one of them had an air cap, which we didn’t. Fortunately I slept well after an all-evening session of pumping up air mattresses with a foot pump that was so unergonomically designed that you couldn’t possibly use your foot on it. Of course, the locals had automatic car-attachment pumps…

ALCOHOL IS YOUR FRIEND

In Donna Hay camping, you eat chilli beans with paprika and cilantro, followed by cinnamon and honey-milk with marshmallow bomb. We had re-heated spag bog. When we briefly left it unattended, one of the locals popped up: “I think you’ll find the crow up in that tree has been eating your food…” Off to the pub. And back to the campsite with copious amounts of booze to numb the creeping embarrassment.

Despite having a little lantern, individual torches, and ingenious miner’s lights for reading in bed, we seemed to spend all our evenings fumbling around in semi-darkness. This may have been related to the copious amounts of booze.

Night two. After replacing air mattress #2, we were to discover that air mattress #1 had a slow leak. So we spent the night suffering a form of sea-sickness from billowing up and down on the remaining air like wave-tossed corks.

ALCOHOL IS NOT YOUR FRIEND

Night three. Q: When does the idea of spending the night with a tentful of pissed 20-something girls stop being attractive? A: When they’re in the tent next-door. After one of the locals happened past to tell us: “I think you’ll find that they have to shut up or be kicked out at 11pm”, Jane and I had enough ammunition for a full-scale 11.01pm confrontation. It must have been ugly. They shut up.

So, there it was. After three barely washed, sleepless, malnourished days, my wife and I had begun to understand the true meaning of “Indented Head.” And if you happen to be circling around the idea of camping for the first time, consider this article a friendly tap on the shoulder: “I’ll think you’ll find the best way to experience camping is in a magazine.”