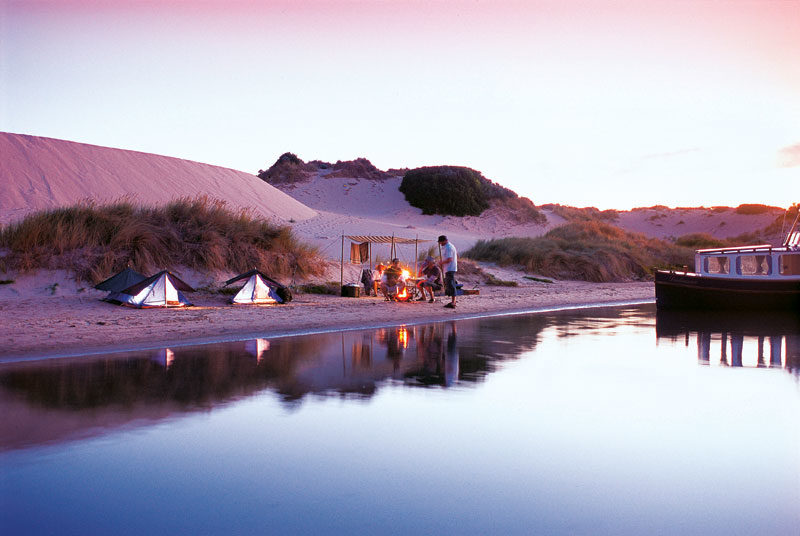 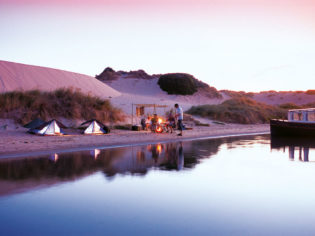 On the very tip of the Eyre Peninsula just a day’s drive from Adelaide, Port Lincoln is famous for its maritime pursuits and is a great base for trips to remote Lincoln NP’s stunning dunes, rugged cliffs and pristine wilderness. If you’ve got sea legs and a good stomach, an abundance of water-based activities beckon: swimming with sea lions or tuna; diving with Great Whites; and Boston Bay boat trips. A little hike up Stamford Hill will give you stunning 360-degree views of the surrounding coastline.

About halfway to Port Lincoln is another gorgeous harbour town, Port Augusta, jump-off spot for the Flinders and the Nullarbor, set between contrasting landscapes of undulating fertile hills, dry salt lakes, flat scrubby plains and the sparkling Spencer Gulf. Further along the peninsula is Whyalla, with its colourful cuttlefish migration between May and September, Cowell’s oyster factory (tastings included) and peaceful Tumby Bay. If you want to mix up your fishy trip a bit, take a detour via the Clare Valley’s vineyards. Change mode of transport and hike or bike along the local Riesling trail to soak up the region’s stunning views and laidback atmosphere, stopping for some delicious locally grown food along the way.

Along Port Lincoln’s foreshore you’ll chance upon a life-sized bronze statue of racehorse Makybe Diva. Tony Santic, one of the town’s tuna farmers, is the proud owner of the three-time Melbourne Cup winner.

2. Adelaide to the Flinders Ranges

The dry, subtropical climate of the Flinders and its wide range of attractions make it ideal for short breakers, with no end of possibilities including fishing, bike riding, bush walking, 4WDing and untold chances to sample local food and wine. Since there are no dingoes in the area, the region abounds with emus, ’roos and yellow-footed rock wallabies, and the surrounding communities are warm and welcoming with a profusion of historical significance.

Drop by Orroroo, 262km north of Adelaide, and gaze in awe at the state’s largest River Red Gum (10m diameter; more than 900 years old). Orroroo also has lovely antique shops and cafes, and if you happen to be travelling on the first weekend in November, stop off at Carrieton for their annual rodeo. Stock up on goods at nearby Hawker, before heading to Rawnsley Park Station. Here you can go horse riding, 4WDing, walking and cycling. There’s plenty of accommodation in town, and the next day you can take a scenic flight over massive Wilpena Pound before heading north to Parachilna to taste some native cuisine. If you’ve approached the Flinders from the southwest via Port Augusta, check out the Royal Flying Doctor Service centre and School of the Air there. The Wadlata Outback Centre and botanic gardens are also worth a look, and from here you can also take a cruise through the Flinders Ranges waterway.

The Flinders Ranges covers 80 percent of South Australia, but accounts for less than one percent of the state’s population.

Mount Gambier is a city set up in a unique landscape of volcanic craters, limestone and lakes. At 439km southeast of Adelaide, it’s a fairish hike to get there, but there’s no shortage of things to do there and on the way, with the city brimming with historic buildings and playing home to the fascinating Blue Lake. Dive under the Engelbrecht Cave in a guided tour, or visit the historic Old Courthouse where it’s likely you’ll see a re-enactment of a trial. The town is also packed with local dairy produce, museums, gardens and accommodation to suit everyone.

Naracoorte, 330km southeast of Adelaide, is famous for its caves, within which you can see amazing fossil deposits inside Victoria Fossil Cave, or the breeding ground for thousands of bats inside Bat Cave. There’s also a public swimming lake in the heart of the town, plus a kiddie pool. West of Naracoorte lies Robe, one of the prettiest coastal towns anywhere in the country, and great for fishing, snorkelling or diving at one of its beautiful beaches. Four klicks south of Robe you’ll find the Little Dip Conservation Park, where you can go bushwalking and see sand dune formations that fringe small beaches and lakes. Further west is Coorong, characterised by a narrow neck of dunes, which formed the setting for the famous children’s book and film, Storm Boy. Here you can bird watch and visit a number of lookouts which offer beautiful views over the Coorong – and remember to stop by the excellent Indigenous Coorong Wilderness Lodge, south of Meningie.

In the past, Mount Gambier residents have been accused of putting blue dye into the famous Blue Lake to make it more attractive to tourists. (If it’s true, it worked!)

Charming Renmark, the oldest European settlement on the Murray and the largest town in the Riverland region, is a fishing haven. Just 254km northeast of Adelaide, with its elegant wide streets and neat bike paths running along the riverbanks, the town has a wealth of water activities, from hiring a fishing dinghy, to learning how to jet ski or wakeboard. If you prefer dry feet, try a picnic, a stroll or a visit to see the thousands of blooms on show at Rustons Rose Garden (at 27 acres, Australia’s largest). There’s never a shortage of nibblies in Renmark, with an abundance of restaurants, pubs and clubs and a selection of cosy B&Bs and hotels.

Drop by tiny Blanchetown, 133km northeast of Adelaide, for a walk to the lookout on the old bridge, where hundreds of pelicans gather. Just a little way out of Blanchetown on Murbko Rd is Golden Crest Gardens, which boasts a profusion of exotic fruits and wax flowers. Continuing toward Renmark is Waikerie, home to more than a million fruit trees, so be sure to sample some local produce. Waikerie is also great for water sports, as it has one of the longest stretches of riverbank in the region. Head to Loxton for a leisurely round of golf before heading to Berri, another fruit-growing region where you can sample fresh and dried produce. Further west in Glossop you’ll find Australia’s largest winery and distillery: Berri Estates.

It’s thought that Renmark derives its name from an Aboriginal word meaning “red mud” – even though the mud in Renmark is patently not red.

KI is an unspoiled haven around 100km offshore from Adelaide that’s crawling with wildlife, desert dunes, beaches, forests and farmlands. It feels deceptively remote, and is Australia’s third-largest island, so there are countless scenic drives to take and plenty of activities to enjoy. Exploring caves, sandboarding, hiring mini quad bikes, walking along bushland trails, kayaking, surfing and canoeing are just a few possibilities before retiring to any of a range of sleeping options, including the luxurious KI Lifetime Retreats and the newly finished Southern Ocean Lodge.

You can’t drive to KI without first passing through the Fleurieu Peninsula – and that’s very good news. Head to Victor Harbor on the peninsula’s southeast for a pony or camel ride along the beach, or play a game of beach volleyball on the new courts there. Heading west towards Cape Jervis, where you’ll pop your car on the ferry for KI, stop off at Normanville for its magnificent sand dunes. Nearby Yankalilla Bay is also an important Indigenous heritage region, and when you reach Cape Jervis, swing by Rapid Bay – a beautiful stretch of coastline highlighted by a pebbly beach and a pretty jetty. A walk along the cliffs or a snorkel down below is great before jumping onboard the Sealink Ferry to KI.

KI’s largest town, Kingscote, was the first official European settlement in SA, and was even proposed as a potential state capital. But insufficient resources to sustain an ever-growing community saw Adelaide chosen instead. 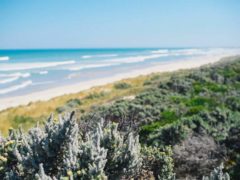 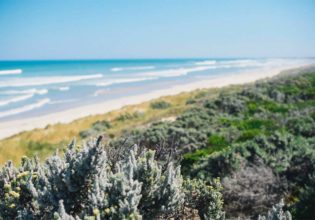