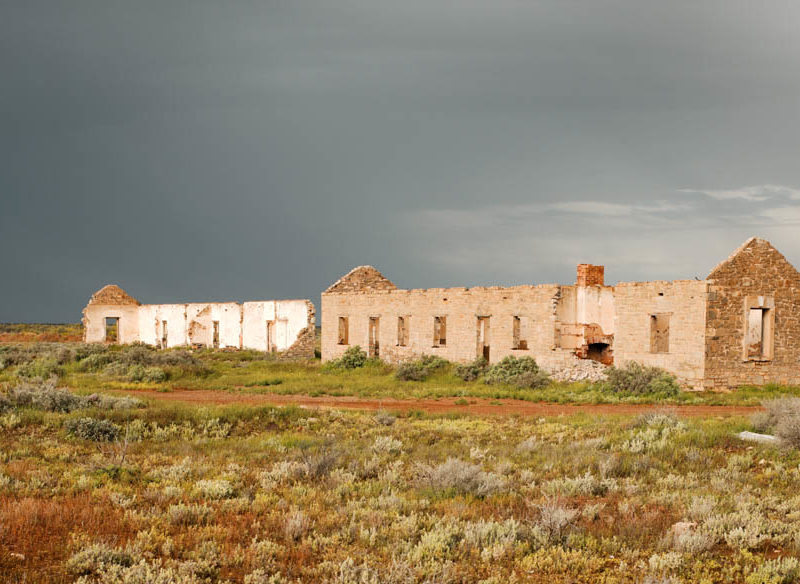 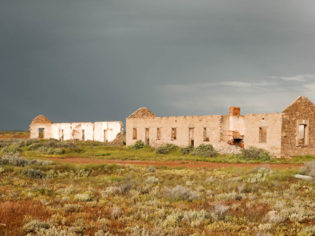 Travel into the very heart of the South Australian outback, see a land painted with an extreme palette and meet characters who are even more colourful.

The water is dangerously hot, and what I really need is just out of reach. Impulsively, I crank up the en suite’s double spa’s jets, squirt more Kudos Spa bath gel in for bubbles’ sake, lean over, and blow on my just-brewed T Bar green tea.

The grand outback road trip summons adventurous drivers from Adelaide, through the from-another-time Flinders Ranges, up the Oodnadatta Track, to delightfully unhinged Coober Pedy, and further north, if you’ve got the time.

Not every outpost along the way is as well appointed as the Prairie, with its own microbrew, top wine list and smart architecture, its rooms partially sunk into the earth for temperature regulation.

What this hip hotel does have in common with the ghost towns and random landmarks along the way is that, collectively, they band together to squash, like a bug on the windscreen, the most hackneyed of clichés: that the outback is a lifeless, featureless abyss.

Though there’s timeless country stone on the outside, the Prairie’s designer interior is pastoral pastiche meets Adelaide’s Peel and Leigh streets, with a pop-up art gallery vibe.

On the cusp of a landscape that Captain Charles Sturt once compared with a journey through hell, you walk into a sweet-scented room and then settle into a dining room of global foodie repute.

Mini road signs identify each component in the outback-sized ‘feral food’ mixed grill: camel sausage, kangaroo fillet and emu mignon. Overall, the menu is feral by name, refined by nature – especially some of the low-key items such as the classic beef cheeks.

As for pre-desert dessert, it’s hard to beat wild-berry and rosella-flower gelato before the deep violets and burnt oranges of sunset drag you back into the outback evening.

The Explorer’s Way’s colour wheel spins vividly and vibrantly throughout the trip. From day one, unimaginable whites radiate from salt lakes close to the coast, such as that near Lochiel.

Add some recent rains, and vivid pinks glow luminously. With harvest greens and canola yellows, it’s a mind-bending Rainbow Paddle Pop-scape. (Keep an eye out for the Lochiel Monster popping its used-tyre head up out of the lake).

As you climb into the Flinders Ranges, time decelerates and space swells. The expansive streets, enduring pubs and generous wooden and latticed verandahs of Quorn are snapshots of Australia’s pastoral past brought to the present.

Its mum-and-dad cafes and old-world emporiums have made it easy for Australian filmmakers to channel the likes of the era; Gallipoli and The Lighthorsemen are a couple of notable examples.

Push on north to explore Wilpena Pound, a mammoth chalice of mountains that crowns the Flinders physically and spiritually. Petrified trees along dry riverbanks hint at what’s to come as Australia’s largest range prepares to capitulate to the outback’s clout.

Past the Prairie Hotel, skeletons of good intentions interrupt the heat shimmers on the road – solitary stone structures in submission. Oncoming cars dry to a trickle with every degree north you travel, until you stop expecting to see anyone.

Signs promise towns ahead, but deliver infinitesimal kitsch-rich hamlets that stand as vertebrae left over from the once-proud backbone of the Overland Telegraph Line and the literally groundbreaking Great Northern Railway.

A lone chained-shut fridge sits upright next to the road at quasi-ghost town Beltana with “shut the door” scrawled across it.

At Leigh Creek, a man with a twisted handlebar moustache and ten-gallon hat sees a spot of rain as “spoiling a perfectly good drought”.

At Lyndhurst, the tarmac says “you can take it from here” to the dirt. A line of marooned road trains twiddles their tyres until the Strzelecki Track opens west to Innamincka.

A few kilometres outside town, artist, visionary and part-time postman Talc Alf fronts his bunker-like gallery, which is perhaps the most remote on any continent.

He landed here in the ’70s from out west, and thought it a better proposition to carve talc instead of loading 40 tonnes of the softest mineral on Earth each day.

His fantastical creations leave a Johnson’s Baby Powder-like residue on the red earth, recounting moments from Australian history, from Aboriginals staring down ‘the original boat people’ right through to Gough Whitlam’s ‘judgement’.

Alf unreservedly shares his theories on the inter-cultural connections of letters, and talks of the sun god Ra like an old friend.

The last long-suffering stragglers of a population that peaked at 300 optimistic souls blew away in the ’80s after the railway’s demise, and the cemetery’s soil has lain undisturbed since the ’60s. Yet enthusiasts now run a pop-up bakery here for passing nomads in winter months, the old oven filling the ghost town with bready aromas.

At Marree, the 19th-century hotel displays multi-tasking abilities beyond its calling. It’s also a museum for ‘tough as nails, soft as butter’ Tom Kruse, the fabled Marree-to-Birdsville mailman, and a place to percolate local legends like the Marree Man (a 4.2-kilometre-long petroglyph, depicting an indigenous hunter).

Some locals say the Marree Man is an artwork bulldozed into the desert; others hold more cosmic opinions.

Pioneering legends, the Afghan cameleers retain their place in local lore here, immortalised in murals and a stained-glass tribute over the pub’s entrance. A replica of their humble mosque sits across from a spectral Old Ghan locomotive: ‘keep out’ and ‘for sale’ signs compete for space on its oxidising red countenance.

The town’s outskirts are a gateway; an authoritative sign says that the Oodnadatta Track, west towards Lake Eyre and Coober Pedy, is open today (or not).

Suddenly, two planes stick upright into the earth, tail-first and wing-to-wing like a pair of post-apocalyptic metallic angels.

“Rust In Peace” says a cartoon bomb, baking in the sun, while a mammoth dingo with a Chrysler head looks on.

Further on, the William Creek Hotel is an oasis of faux-ramshackle chic, overflowing with in-jokes: colossal animal heads, handles on both sides of the front door, and a parking meter outside – in a town with a population that can be counted on two hands.

‘Town owner’ Trevor Wright has been flying out-of-towners over nearby Lake Eyre for donkey’s years, but you’d never guess it.

“So dry, so much space, so white,” he blasts over the radio with first-day-of-the-holidays enthusiasm. It’s true that, from above the creeks and tributaries, the patterns are definitive and artful. The outback hues are almost edible: coffee, caramel, milky tea.

“If you look at old indigenous art, you would swear they could fly,” says Trevor.

On Eyre proper, perspective is ungraspable – even at 250 kilometres per hour, you feel glued to the spot.

Water vapour blends sky and lake together. Drop a few hundred metres and the illusion evaporates: black swans and pelicans are in abundance, and a pair of emu prints seem to walk off the edge of the planet.

The small town briefly seems like a metropolis in comparison, though you can quickly recalibrate with a visit to the beyond-ancient Breakaways and the Moon Plain on the outskirts.

The best way to get to know this multicultural Calamity Jane is to meet as many of her characters as possible, listen to tall tales and swap some of your own.

Head underground wherever you can, to old mines and dugouts, and to the subterranean bar in the town’s four-star show-tel, The Desert Cave, where the temperature will be 23 degrees even if it’s pushing 50 outside.

Absolve your sins in an underground church and go fossicking for opals, or just browse the area for familiar moments from Mad Max 2 and Priscilla et al.

Whatever you do, make sure you have an exit plan. Many a local has come here for a week and stayed 30 years.

The Details: The Explorer’s Way

The Explorer’s Way runs 2445 kilometres, if you include all possible roads: Adelaide to Flinders Ranges, Arkaroola, Marree, Port Augusta, and Coober Pedy to the border.

Getting there: We recommend a 4WD (although it’s possible in a 2WD if dry). For road conditions, check out dpti.sa.gov.au/OutbackRoads

The Tunnel of Time exhibition in Port Augusta’s Wadlata Outback Centre offers historical context to the area, and the sprawling Arid Lands Botanic Garden gives an appreciation of native fauna. 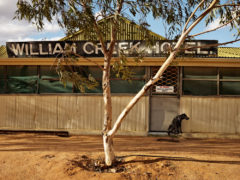 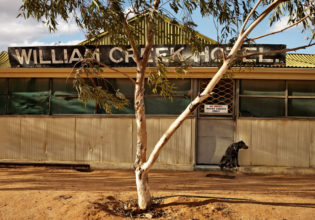