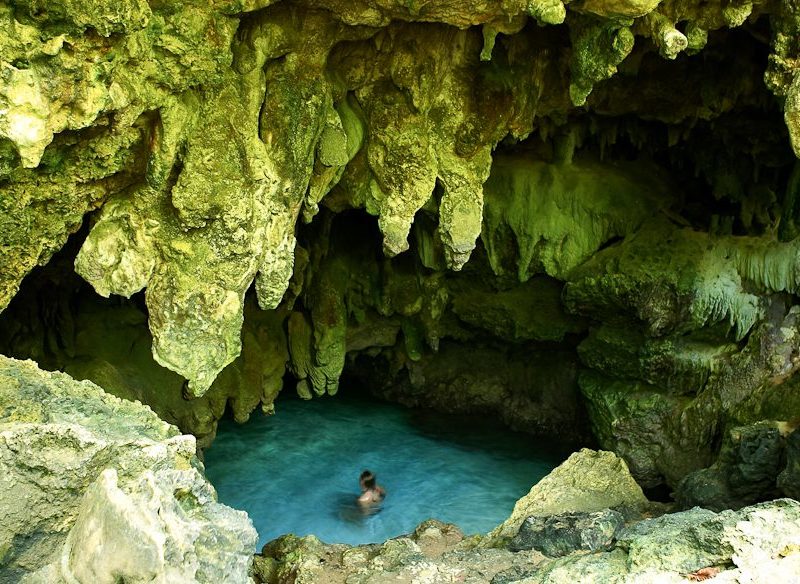 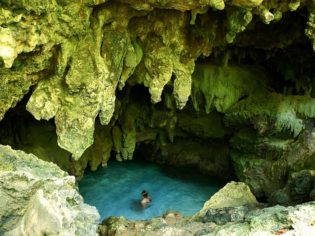 Georgia Rickard discovers surprises at every turn on a trip of a lifetime to idyllic Indian Ocean outpost Christmas Island.

Somewhere, deep in a crevice of the Christmas Island jungle, a rifle-wielding Coconut Crab is biding his time. “It happened when the soldiers relocated here, after the Tampa crisis,” recalls long-time resident, Linda Cash. “They were going through a training drill in the jungle when one of their rifles just clean disappeared. Gone. Just like that.”

Having looked everywhere, and failing to locate the gun, the soldiers were eventually forced to conclude what the locals could have told them.

“Those bloody crabs,” she says, shaking her head. “They’ll steal anything.”

The idea of kleptomanic, gun-wielding crabs running wild on a tropical island is at least as far-fetched as the very location of this place. But no less true. In this strange spot (and it is strange; bursting with Attenborough-worthy anomalies), truth is more outrageous than fiction on a regular basis.

For instance, island residents have caught those Coconut Crabs (also called ‘robber crabs’, for obvious reasons) stealing mobile phones, lanterns, sunglasses, shovels; they’ve even been caught making off with entire bottles of wine. Like dogs, they’ve also taken to turning up at the back door at dinnertime each day, knocking on glass windows and begging for scraps. (“If there’s two or three of them at the door, I have to give them equal pieces of bread,” local dive master Linney Jemyns admits. “Otherwise they fight.”)

Growing to almost one metre in length (Google “robber crab rubbish bin” for a genuine visual), with a habit of loitering on roads, in gardens, in the townships and almost directly underfoot with alarming frequency, they are an unmissable fact of Christmas Island life.

Alas, Coconut Crabs aren’t what you’d call the primary association most Australians have with this place – the current political landscape has taken care of that. But it was only several short years ago, in 2008, that David Attenborough ranked his time here during the island’s annual red crab migration, as the most outstanding television moment of his career.

That’s a fairly remarkable claim in its own right – but for an island that the vast majority of Australians dismiss? Fair to say, Christmas Island is suffering an ill-deserved identity crisis.

It was only 1958 when the federal government purchased the 19 by 14 kilometre island from Singapore – a £2.8 million price tag that bought Australia a strategic foothold in the Indian Ocean. Alongside the phosphate-rich soils here (which are still being mined today), the island came with a mélange of new Australians: Islamic Malays, Chinese Buddhists and Taoists.

These days, to drive past a Buddhist temple on the way to a Malaysian restaurant, waving hello to a bleached-blonde group of kids along the way, while an evening call to Muslim prayer rings through the dusklit air, is perfectly ordinary.

The cultural dynamics of CI’s small townships aren’t the main reason this island is so remarkable, however. Rather, it’s her natural spoils – the tropical Asian jungles toppling onto black volcanic edges; the sugary white beaches mingling with lush green moors, the endemic plants, rare birds and incredible wildlife – that make a visit here truly worthwhile. But first, the detention centre. It’s a topic most locals loathe to discuss, though it is clear that mixed feelings run deep through the community.

“I’ve processed a few people off boats,” one eventually offers. “We used to come up and greet them, make sandwiches, take peoples’ names, give them a health check, then they’d be flown off to the mainland, simple as that. It was never a political issue until the Tampa.”

Indeed most seem to feel that the island – a place that really could garner much more attention for its beauty, if it weren’t for the controversy overshadowing it – has become an unwitting victim of political crossfire.

“The detention centre is all Australia thinks about when they hear ‘Christmas Island’,” says another. “But there are detention centres on the mainland… in Sydney, for instance. No one thinks badly of Sydney.”

Then again, the lack of national knowledge about this island might just be her saving grace. Low tourism numbers have kept those natural luxuries near-pristine. It’s just one of the many reasons to visit, but should you need more convincing, we’ve listed our six favourite selling points.

According to local lore, when orders were issued to cut down some of the island’s trees during Japanese occupation in World War II, the locals carefully selected to clear an area where they’d always wanted to put a golf course. Today, the deforested area – now an 18-hole fairway – is lush and well-manicured, a testament to how seriously the locals take duties of relaxation.

As with all tropical islands, there is a proper roll call of characters here: the larger-than-life extrovert, the recovering divorcee, the permanent bar-fly (who, no doubt, enjoys the island’s duty free standing as an Australian territory – gin for example, is cheaper than its accompanying tonic).

The tight-knit community is worth tapping into – and that’s not difficult to accomplish. Have a meal beneath the palms at Indonesian-style mansion slash restaurant Rumah Tinggi, watch the locals burst into spontaneous karaoke at Chinese restaurant Lucky Ho, order some surprisingly good fare at local watering hole The Golden Bosun, or just tap someone on the shoulder and ask them about the Great Toilet Paper Crisis of 2003. That’ll get them started.

You can’t ignore the island’s red crabs: they are everywhere, even outside the pub each night (which you might imagine would be a bit of a dangerous place to be, if you’re a crab). “Sometimes you see them on the middle of a smooth vertical wall and you think, how did you even get there?” says local tour guide Lisa Preston. “I just pick them off and put them on the ground again, so they don’t hurt themselves.” Her mindfulness of these crimson-coloured creatures is typical of residents: many keep garden rakes in their cars, for when the roads become overrun with them.

During crab migration season (in October/November each year) dozens of kilometres of plastic guards are rolled out along gutters, so the crabs can be safely funneled down to the sea via over-road bridges and under-road chutes. “It’s a costly exercise keeping the crabs happy,” admits Linda Cash, “but the island’s entire ecology is based around them. If they were to disappear we’d lose the keystone species of the biosphere.”

The coral reefs that now form Christmas Island were once embedded in the ocean floor, pushed forth into a giant tiered wedding cake of ancient, craggy landscape. There are spectacular caves to see (and dive), thunderous blowholes to watch, pinnacles to clamber, rockpools to splash and this: The Grotto.

According to Beth and Shaun Tierney, co-authors of The Essential Christmas Island Travel Guide, it was 1885 when five Dutch soldiers “were cast away, and found themselves living on coconuts and crabs” for 12 long months. According to local Linda Cash, it was Dolly Beach (see previous page) where they camped out, though, so we can’t say we feel too sorry for them.

These days, getting to Dolly is a little easier – take a 30-minute 4WD from town, then enjoy the 30- to 45-minute hike through some very pretty rainforest. Pack a picnic… and some champagne. (You did see that pool, didn’t you?)

It is a little-known fact that you can swim here with the world’s largest fish, the whale shark, before they move onward to Ningaloo Reef each season. “We don’t allow you to touch them, but sometimes they come up under your belly and push you up out of the water,” says Preston. “They can be quite playful – and huge, like trucks. The first one I saw was 10 metres long.”

Indeed Christmas Island is literally surrounded by dive sites; fringed by some 70 kilometres of thriving coral reef. It is also home to some of the longest underwater drop-offs in the world, thanks to its perch on the edge of the Indian Ocean’s deepest point, the Java Trench.

So even if you don’t come here during whale shark season, there is plenty of beautiful diving to be done. Just make sure, while you’re exploring those crayola blue depths, that you take a moment to stop and gaze upwards. The water is so clear that you can see the birds soaring above from 30 metres below.

Of all the natural wonders here on the island, however, you can’t help but feel that it’s the Coconut Crab that fascinates most of all. Like ancient old men in comically colourful casings, they shuffle about the island, growing crabbier as they age (yes, we went there). Young‘uns – those that are say, five years old – might skitter off the road at the sight of a car, but older crabs won’t be budging for anyone.

It’s quite normal to have to get out of your car and play chicken, advancing closer and closer until your challenger stops angrily waving its pincers and scuttles off. Swedish scientists who travelled here in the early noughties also established that they have an outstanding sense of smell – which is why more than one camper has reported waking in the night, mysterious sounds emanating from outside their tent, to discover their esky under siege.

Quirky, unique and mostly misunderstood – is it the crabs, or Christmas Island we’re referring to? It doesn’t matter. You’ll be charmed by both.

Getting there: Only Virgin Australia flies to Christmas Island, and only from Perth. Once you’ve arrived, the best means of getting around is by hire car; most of the best spots require a 4WD.

Staying there: Accommodation on the island is fairly basic – you don’t come here for luxury. We stayed at The Sunset, which is probably your best bet. Rooms start at $160 per night.

Eating there: Thanks to air freight costs, buying fresh food is expensive – really expensive (four bananas cost us $9, for example). Conversely, restaurants can be quite reasonable.

• For nine months of the year, the weather is 28 to 30 degrees, with ‘chance of a shower’ – standard tropics, in other words.

• Drive extra carefully – phosphate dust from the back of mining trucks gets onto the roads, making them slippery when it’s humid (ie: all the time). Speaking of which, there are enormous fines for driving over crabs with your vehicle. Make like the locals and drive slowly. 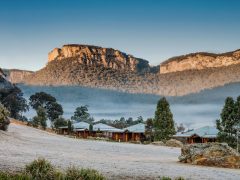 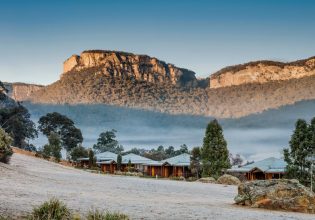 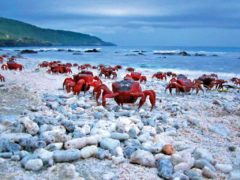 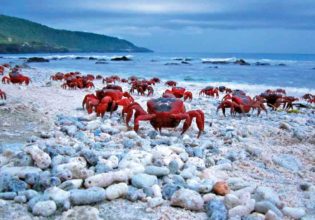