Road train to nowhere ticks bucket list with a difference 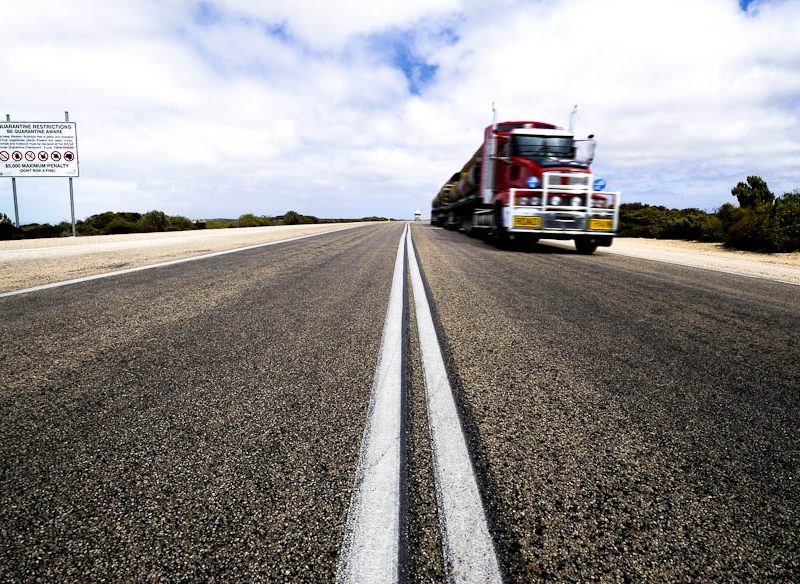 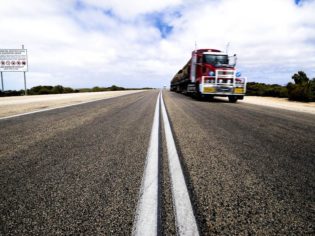 Uluru, the Opera House… not for this South African. When Richard Asher arrived in Australia, he had a very different item to tick off the bucket list.

“Make your way in, mate, and I’ll send you to Karratha.”

This was it. My first call! I was about to live the dream, one first imagined in the back of Mr Seymour’s maths class, where pictures of road trains caught my 11-year-old eye as I leafed through National Geographic. It’s 23 years later, and I’m about to become an Aussie truck driver.

OK, I wasn’t going to be driving a heaving 53-metre quadruple-trailer road train. But I’d been preparing for years and had arrived in Australia with a working holiday visa in one hand, and a hard-earned, ‘rigid’ licence from the UK in the other. Hard-earned, as in many hundreds of pounds for lessons, buckets of exam-induced perspiration and more failed tests than I care to enumerate without a substantial bribe. Suffice to say, I’d been planning this for enough years to be considered certifiable by many of my settled friends.

I was about to cart six tonnes of concrete bits and pieces from Perth to the Pilbara, Western Australia’s iron ore mining country. I knew little about Karratha, except that it was a mere 15 hours up the coast. This was a bread-and-butter run for my company, which specialised in charging panicked mining conglomerates ridiculous amounts of money – enough for us to drop everything and leave immediately with some piece of vital machinery.

The downside for us drivers was that we were permanently on standby for a call from the boss, whose use of profanity in my ‘interview’ I’d found quite refreshing after a lifetime of formal employment. Ditto his long-winded attempts to scare me out of my chair with Northern Territory crocodile talk. He’d also warned me that I’d eat terribly and barely sleep at all while my co-driver rattled along the Great Northern Highway. So you see, I was highly excited to get that first call.

Within the hour I’d cycled to the depot. Here I was, about to hit the road with the grizzled veterans of the truckie world. Soon, I too would sport plentiful facial hair and an inflated waistline. Beauty!

That first trip did not prove to be an easy one. Loading was not smooth, and not just thanks to my incompetence with ratchet straps. We had everything nicely arranged on the tray when somebody noticed we’d forgotten a 1000-kilogram-pipe. The volley of cussing from the yardie nearly brought the warehouse down.

It was dark when we finally got going. As was customary, we’d keep the truck rolling while taking turns to drive. My co-driver, Steve, wasn’t about to let some rookie take first stint and took us to Geraldton, four hours up the road from the WA capital.

Then at 11pm, on a dark and windy night, after a ‘free driver coffee’ (which wouldn’t have been allowed within city limits in Melbourne) at the 440 Roadhouse, it was my turn. As I edged out onto the North West Coastal Highway, I reflected on just how far from ideal conditions were. It was inky dark and I didn’t know the road.

This was my first time driving a loaded truck, and the first time without an instructor or examiner alongside me. I was pining for daylight, but there was no turning back now. Also, it was past my bedtime.

I toddled along at first, barely touching 90 kilometres per hour as I got used to the feel of all that weight whilst negotiating what turned out to be one of the hilliest, bumpiest stretches in the state. Road trains kept charging up behind me, heedless of my plight as they roared past.

But the ones coming my way were far scarier. Australia has the world’s biggest trucks, but they drive on some of world’s narrowest highways. Accustomed to the luxury of a substantial shoulder overseas, I’d flinch every time one of these colossal brutes thundered past.

I’d like to say the loud bang never came on that first trip, but that would be a lie. It happened on our return two days later, somewhere in the desolate Martian plain north of Overlander Roadhouse. I’d just heaved another sigh of relief after passing a road train, when I heard a deafening crash and the sound of breaking glass.

This is it, I thought to myself. I have hit a road train, there was a loud noise and now I am dead. But ever so slowly it dawned on me that I was in a place consistent with my personal time-space continuum, although there was no denying the fact that the driver’s side window was now in my lap. I’d been unlucky, victim of a freak stone thrown up by the road train. Nothing a dustpan and brush couldn’t solve.

With more runs around Western Australia – and a couple of epic five-dayers to Queensland – I built confidence. Ignoring my co-drivers’ advice to ‘flatten the dumb animals’, I learnt tricks for not killing kangaroos at night, ending my three months with only four murders to my name.

I learnt to keep my eyes peeled for stray cattle, with which impact at 120 kilometres per hour is not recommended. I learnt how to run the fuel tank down so we could fill up with the 200 litres of diesel we needed for a free meal at Cue Roadhouse. And I finally mastered ratchet straps. Not once did I crash. At times I was tempted, though, because my  co-drivers could really try the patience.

My vision of truck driving had been of me, the open road, my favourite music and a lot of pie-eating. The reality was a little different. Not only were Australian pies a disappointment to this South African, but driving ‘two-up’ meant being thrust into a small space with somebody I might not like for lengthy periods of time.

But as a travel experience, you couldn’t fault it. Here, at last, I was finding the kind of old-school Aussie recently declared extinct in Melbourne and Sydney. Fishing, hunting, engines and agricultural techniques were to be the stuff of conversation, whether I liked it or not.

“You into guns?” said Tony, barely five minutes out of the depot. I’d barely finished my ‘not really’ when he’d launched into a never-ending story about finding a .353 by the roadside on the outskirts of Perth. Tony wasn’t the only one who wanted to talk barrels and ammo.

Steve, too, was greatly excited to have found some sort of rifle in one of the many abandoned vehicles one passes in the outback. He also held a senior position in his local gun club, and I was treated to all the latest news. Give me strength.

This was the first time I’d really got to know the working man, accustomed as I had been to offices. I wasn’t sure we gelled. Steve loved the sound of his own voice and had all the answers. But despite all the fire and brimstone, he had a childlike aspect that gave me flashbacks to the classroom. For instance, anybody who endeavoured to do their job by the book was painted as a teacher’s pet, although the preferred industrial jargon rhymed with ‘grass picker’.

The prevailing attitude was best exemplified by a Kiwi called John – perhaps the most negative human being I’ve ever encountered. Nothing was right in his world, least of all the company employing him. And he could moan all 3000 kilometres to the Pilbara and back.

“They’re a pack of pricks, there’s no duty of care and they never give me solo runs, hey? I’ve had a gut-full of this place.”

I usually had my earphones in by this point, wishing fervently that they would give him solo runs. But I could hear him whining away beyond even the loudest ABBA song I could find. Perth wasn’t to his liking either, and he had a peculiar dissatisfaction with the shape of the city.

“160 kilometres-long and 40 kilometres-wide, Perth is. What a shithole. I should just go back to Nuh Zelland, hey?”

I wished he would. More to my liking was Ed, also Kiwi but a Maori man of few words. He’d been a prison warden back in En Zed, and was built for the job. His handshake was that of a man you don’t argue with. Well, I couldn’t: his accent was impenetrable and I don’t think he understood South African either. Our trip to Queensland and back was quiet.

It wasn’t just my partners I had trouble communicating with. The two-way radio took some getting used to. My introduction to the medium, on that first run out of Geraldton, was, “You’ve got your brights on, ya prick.”

It seemed strange to have all these people talking and not know who was addressing whom. That’s if I could understand them at all. Combine static with a deep Australian accent and you can have a difficult time. More than once I had to ask my co-drivers to translate.

By the end of my three months, despite a dishevelled state that I was rather proud of, I think my cover was blown.

“You’re too educated to be a truck driver,” Tony remarked in a rare break from talking about his latest fishing trip.

He was probably right. The novelty of reaching my goal was wearing off good and proper. But still, I won’t rule out driving a road train one day. Solo.