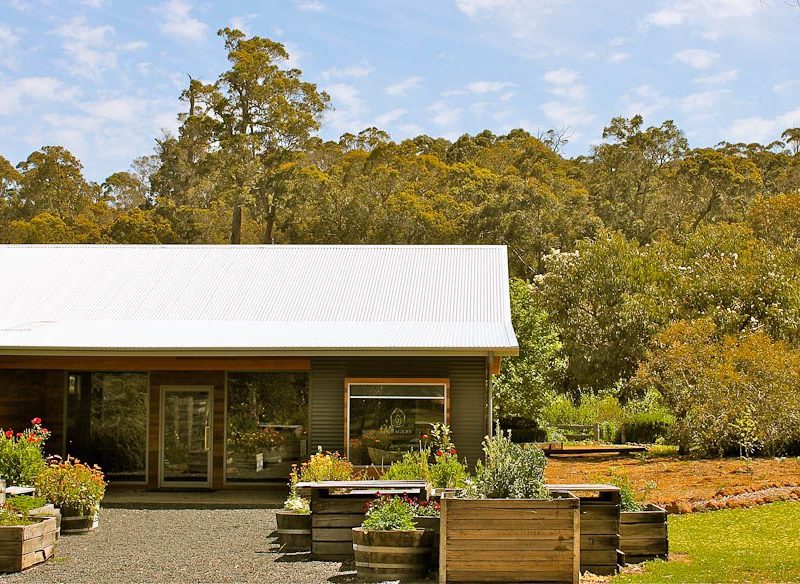 They may not have dirt under their fingernails, but fresh local produce is still on the menu at Foragers, WA’s hottest ‘foraging’ restaurant, says Fleur Bainger

Foraging is tres ‘on trend’ in foodie circles, what with chefs scouring coastal flats for samphire, or native bush for quandong. Noma’s Rene Redzepi made it hot, while cool kids like Luke Burgess of Garagistes (Hobart) and Ben Shewry of Attica (Melbourne) keep it sizzling. I’m rather attracted to the notion of hunter-gathering, so I’ve long been intrigued by Foragers, a little restaurant in WA’s Southern Forests region, just south of Margaret River.

From the outside, it seemed like a collaboration of all my favourite things: a farm-cum-cooking school, cum-forest retreat, cum-weekend restaurant that worships nature above all. It’s run by tree-changer, Sophie Zalokar – a Maggie Beer protégé – and her Swiss-born husband Chris, who retreated from the big smoke to the former milling town ofPemberton.

There’s plenty to dig up, sniff out and pick in this tall tree region. Think black Perigord truffles, juicy asparagus spears, sweet marron, and plump, ruby-red cherries. I can’t wait to find out how much of Foragers’ produce was dutifully procured from their own backyard.

I book a seat at one of the lauded Seasonal Dinners, held every Saturday, after informing chef Sophie via email that I’d be arriving on my own, which she reassured me would be fine. On the four-hour drive south from Perth, I imagine being welcomed by a crimson cheeked, buxom lady rushing for a hug à la Magda Szubanski in Babe, and introduced to other grinning diners. I picture a single table where we sit shoulder-to-shoulder, laughing and discussing wild ingredients as we fork in fresh-as-a-daisy produce.

But the problem with idolising something is that it rarely meets expectations.

I arrive to join nearly 40 other diners in a low-lit room of several communal tables so wide it’s hard to talk freely. It’s a sophisticated outfit, with floor-to-ceiling glass doors and an open commercial kitchen from where I spy the chef and her two assistants working diligently.

I wait awkwardly by the door for a greeting but it never comes. Spotting my surname on a card, I sit myself down. There’s no one opposite me, and there are couples on either side. I feel like the unpopular kid at school. Luckily one pair is gracious enough to befriend me.

I’d presumed there’d be a welcoming speech explaining how the night will progress, but instead the first course comes out, delivered noiselessly by Sophie’s husband, Chris. As it turns out, Foragers maintains more of a low-food-miles than foraging philosophy. No one gets down on their hands and knees, instead the owners source their bounty from surrounding farmers, crediting them on the back of the menu. Salad greens are plucked from the on-site veggie garden but nothing actually comes from the wild.

No matter, I think as a sugar cured trout blini topped with fennel pollen (not foraged) rolls around my mouth. Steaming asparagus soup follows, poured over a daub of crème fraiche, garnished with roast hazelnut crumbs and served with spongy, homemade sourdough and house-churned butter. Redemption is nigh.

The main of colossal lamb shanks served with a pine-nut-dotted celeriac puree and semi-dried muscatel grapes continues the rustic, country-style fare embellished by cheffy touches. It doesn’t shock with originality but wins out in the flavour stakes. My belt buckle is beyond straining.

It’s now that the chef emerges. She’s softly spoken, calm and eloquent, and tells us about being Maggie’s second apprentice, mentions the shanks are more hogget than lamb, and reveals her Asian WWOOFer (Willing Workers On Organic Farms) inspired dessert: white chocolate ice-cream and strawberries sandwiched between discs of green tea shortbread. It’s a charming speech that would’ve fit well at the start of the night, reducing the ambiguity of what was ahead.

Espresso-style coffee winds things up and I pay Sophie and Chris, hoping for interaction with this couple I’ve long admired. But there’s nothing, not even a “did you enjoy the meal?” and I walk away puzzled. Perhaps they’re just shy?

I emerge into the forest fringed night, ready to forage for my bed – if I make it; I’m so full I may just get Mother Nature to provide a pillow.

The verdict: While short on country warmth, it is by far the best restaurant in the region – book if you’re already exploring Pemberton. It’s not tailored to singles, but a couple or group of friends will have a ripper evening.

We rated: The beautiful, seasonal food sourced from the region, and generous portions.

We hated: The lack of interaction – or even acknowledgement – from wait staff was disappointing.

Notes: Seasonal Dinners are $75, BYO (Saturday nights). Kids are not catered for so unless you want to splurge $75 on them, leave them at home. There are wood-fired dinners on Friday nights for $55. Cooking and foraging classes are held occasionally. Foragers offers accommodation but book early.