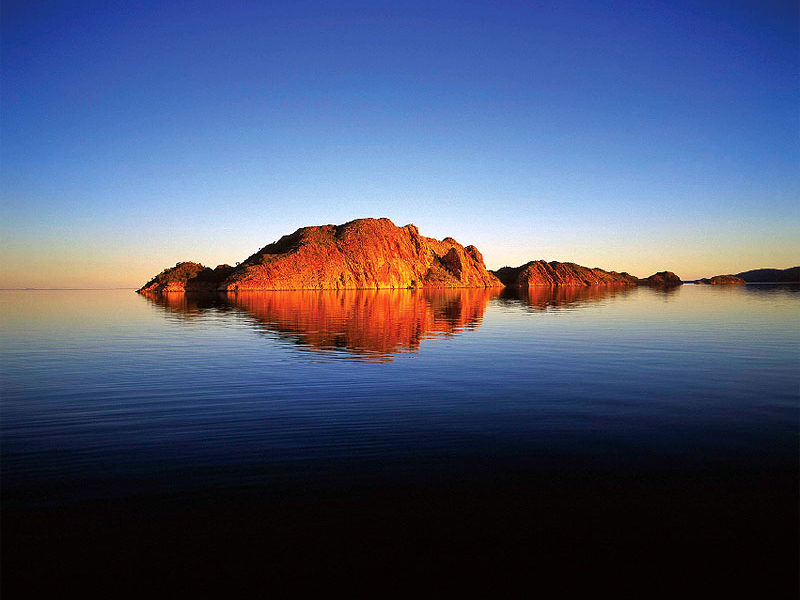 For a very different perspective on Australia’s much-visited remote northwest, try a slow paddle along Lake Argyle and the mighty Ord River. It’s the perfect pace at which to explore the East Kimberley. Words by Cameron Fergus.

Pushing off from the bank, we glide across the perfectly clear water to meet the main flow of the river. Pandanus palms line the shore, the largest providing shade for a flock of brilliantly white egrets watching intently for their next feed to swim by. It’s mid-morning, the sun is hot and the air dry, but the breeze off the river keeps us cool under our broad-brimmed straw hats. The sound of our paddles brushing through the water sets a calming rhythm. We drink in the stark beauty of the place. An ancient boab tree – with its wildly twisted trunk and broad, leafless canopy – oversees our progress.

We’re on a self-guided canoeing and camping trip, paddling from Lake Argyle to Kununurra in WA’s far-flung north. The attraction: the mythicalKimberley– much beloved by explorers, absconders and bush poets – on our own, at our own pace. Over the course of the next three days we paddle along 55km of this largely untouched river, arriving back in town late on the third day. With only limited time available to us, but certainly not wanting to limit ourKimberleyexperience too much, we were faced with that impossible question: “What is the best way to see theKimberley?” Forgoing the 3200km drive from our base inPerth, we flew in to Kununurra, the capital of theEast Kimberley, and kitted ourselves out with the necessary equipment to take on the mighty Ord.

This boab is estimated at well over 700 years old and provides a spectacular and uniquelyKimberleyway to spend a night under the stars.

Now, sitting in the front of the canoe, drifting through spectacular gorges, accompanied by birdsong and the rustling of reeds in the breeze, it’s only the occasional bump of my companion’s paddle against the side of our craft that reminds me that I don’t actually have this place to myself. We talk little when on the river, from time to time pointing out emerging sights, but for the most part we share this place in silence. It strikes me now, more clearly than it has in the past, why the TV campaigns I’ve seen featuring theKimberleyare conducted in largely whispered tones. This place is a secret, almost too good to be true. Almost too good to share.

“As big as Lake Argyle”

Beside the river freshwater mangroves, fan palms and pandanus overhang the banks. Rock figs sprout from tiny cracks in the gorge walls lining our journey. On both sides of the river the ridges are populated with paperbarks and ghost gums separated by patches of dirt, hard-baked by the long dry season. And, seemingly around every bend, set back from the waterline, are the boabs – the ever-present symbol of the Kimberley – presiding over the landscape, their water-swollen trunks like the fat bellies of old men. Anywhere else on the planet the tinder-dry bush would sit in stark contrast to the vast mass of water flowing alongside, but here in the great northern frontier it seems a natural fit. It’s the Kimberley of Australian folklore, the exotic land far from the city that completely absorbed me as a child, watching Malcolm Douglas bounce around the bush in his old Landcruiser, or glide through the clear waters in his tinnie.

Driving us to the starting point, our trip coordinator, Maka from Go Wild Adventure Tours, explains that his company has run self-guided canoeing tours here since 1991, providing a more leisurely alternative to the motorised tour boats that still buzz day-trippers along the mightyOrdRiver. Maka is your classic outback bloke: once a city dweller, he’s now well adapted to the casual pace that scorching heat dictates, and has a relaxed approach to everything except details. Arrangements for our trip are well in hand, with all of our kit either packed into the canoe or awaiting us at the scheduled campsites along the way.

AtLakeArgyle, Maka explains that the huge inland sea stretching out before us was created in 1972 with the damming of the Ord. At full flood you can be on a boat in the middle of the lake and not see land in any direction. In a country so fond of its big attractions, I’m amazed the term “As big asLakeArgyle” hasn’t made its way into the vernacular. The lake is part of the Ord River Scheme, which also includes the Diversion Dam in Kununurra, and it’s the section of the Ord between the two dams that we will paddle along over the coming days. After a final reading of the map, Maka bids us a casual goodbye: “See ya Tuesday. If you’re not back in by dark I’ll come and look for ya”.

The Kimberley is ours alone to enjoy.

The Romance of the Kimberley

The three-day trip from the lake to town is broken up into paddling distances of around 23km, 9km and 23km on successive days. The river is narrow on the first day, the water flowing at a reasonable clip, but as it widens and slows over the following days the paddling becomes more of a challenge. Each evening our camp is at a clearly marked spot on the riverbank, with basic but well maintained areas for cooking, washing, cleaning and sleeping.

Each night we have the campsite all to ourselves to enjoy, and it feels simply indulgent. Cold bush showers wash the heat of the day from the skin, but this is just as easily achieved by diving straight into the river. And while this section of the Ord used to be prime habitat for saltwater crocodiles – yes, those are the ones that will eat you – the monsters were removed from this stretch of the river as part of the Ord River Scheme and it remains a croc-controlled area patrolled by local authorities. There are, however, plenty of freshwater crocodiles – and while they’re readily seen poking their narrow snouts out of the river to observe the action on the surface, they’re highly disinterested in us.

We’re awoken each morning at around 5am by the quickly brightening sky and a dawn chorus belting out in the trees above. The first morning’s performance begins quietly: the buzzing of insects commences the show with a low static that builds to white noise. Soon a gaggle of birds – finches, chats, magpie-larks and honeyeaters – announce the day. Raucous cheeps are accompanied by chik-chik-chiks, squeals and whistles. The forest canopy above our tent sounds like a house preparing for the day: parents getting ready for work, fussing over and eventually losing patience with children more concerned with play than breakfast. That morning chorus quickly becomes the morning chaos. A crow flies along the river’s edge, on the fringe of the forest, announcing the “hurry up”.

Kookaburras share their amusement at the calamity of the scene, and then, at its apex, the bush falls almost silent, as though the door has closed and the mob has left the house. Only an unseen bird hidden in the trees continues chirping a conversation with a friend across the way, backed by the continued static of insects, now at low volume. Later the cockatoos take advantage of the silence and fill the space with screeched tones. The show all but over, the kookaburras fly directly over our tent, off to seek entertainment elsewhere. A quiet sleep in is about the only unattainable element in this otherwise relaxing adventure.

Dipping our bottles into the river to drink the perfectly fresh, clear water, we are – quite literally – filled with the essence of this place.

A comparatively short 9km paddle on the second day has us at Stonewall Camp by early afternoon. Exploring the campsite, we tramp along a dusty track and pitch our tent in a clearing on a rise above the river, directly beneath the massive limbs of a giant boab, a place that Maka has tipped us off to. This tree is estimated at well over 700 years old and provides a spectacular and uniquelyKimberleyway to spend a night under the stars. Later, a short distance from “boab camp”, we watch a Bowerbird putting on a hopping, chirping, feather-spreading display, wooing his mate into the bower for some private time. The romance of theKimberleyis clearly not limited to its human inhabitants.

The early morning sunshine glimmers off the river as we glide our canoe into the final stage to Kununurra. The river is at its widest and slowest now, so there’s some work to be done to get us back to town. The sun has arrived, its presence instant and intense, but it’s a fine way to work up a sweat. Dipping our water bottles into the river to drink the perfectly fresh, clear water, we are – quite literally – filled with the essence of this place. Each day on the river has revealed greater wonders and the question we’d posed to each other when planning the trip – “What’s the best way to see theKimberley?” – has been answered in spades.

We arrive back in Kununurra via a final stretch through Lily Creek Lagoon, the only witness to our achievement a cormorant sitting atop the tall trunk of a drowned gum. We’re a little sore and a little sunburnt, but arrive with broad smiles. It has been a spectacular journey, a perfect and different way to look upon the many facets of theKimberley, and I feel that I’ve experienced firsthand the wonder that had me entranced watching Malcolm Douglas all those years ago. I’m now bound by the local adage: once you’ve drunkOrdRiverwater, you’ll keep coming back. It’s a magnificent place, at aKimberleypace, and I can hardly wait for next time.

Details // Canoeing Through the Kimberley

We booked through Go Wild Adventure Tours, which has full three-day, two-night experiences departing every day for $165 per person. Our campsites were organised at Cooliman Camp (Day 1, 23km from Lake Argyle) and Stonewall Camp (Day 2, 32km from Lake Argyle, 23km from Kununurra). The rules change frequently regarding bush camping in the Kimberley, so check locally for current approved campsites. 1300 663 369.