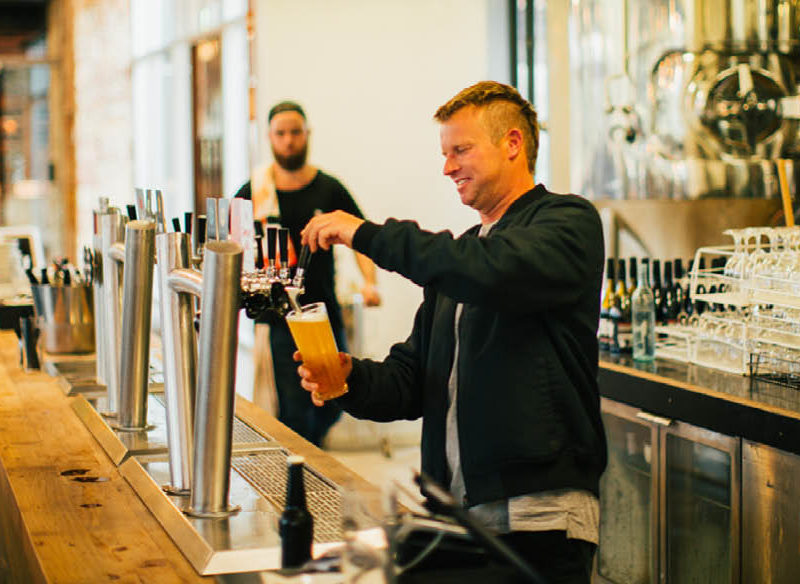 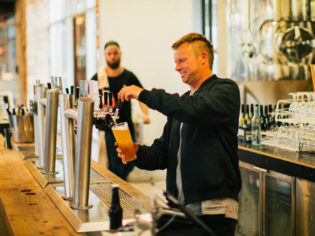 A bon vivant and natural host, surf pro Taj Burrow loves showing his famous (Kelly Slater) and lesser-known mates to his favourite drinking and dining holes – read on for a Burrow surf, scoff and slurp tour through the Margaret River region.

Former surfing champ Taj Burrow may have left the world circuit behind, but he still rides his local waves like a demon. Sandy haired and with an ear-to-ear grin, the 39 year old and his young family live in Yallingup, a beach-facing hamlet in WA’s Margaret River.

Surrounded by wineries and, the region’s fastest growing sector, breweries, he’s been inspired to create his own beer. Called Honest Ale, the surfer is rather partial to the froth-top whenever he’s not cutting up the waves with fellow surfing greats Kelly Slater and Mick Fanning (more on where he takes them, soon), or UK chef Jack Stein (him, too). Surprisingly, Rick Stein’s son is pretty handy with a surfboard, and the pair hit it off both in the ocean and in the kitchen. We asked him to give us his lowdown on all things Margaret River.

Surfing along this stretch of coast, it just so happens that all the good waves are located near all the good wineries and breweries. On the way home, you can’t help but go past one, so you stop in and have a drink and a feed. Black Brewing Co. became one of our regulars, and I got to know everyone in there. Eventually, they offered me the opportunity to make my own beer. Hell yeah! I got sucked straight into it; what guy doesn’t want to make their own beer? The brewer took a couple cracks and we came up with Honest Ale.

How would you describe the flavour?

It’s sessionable, so it’s not too hoppy and crafty and you don’t get bloated from it. It’s got tropical aromas, but it’s easy to drink; it’s clean and crisp. I wanted a beer you could put away in big numbers and drink all through the day yet not feel too heavy.

But isn’t Margaret River all about wine?

It’s more famously a wine region than beer, but it’s becoming more of a beer region.

If breweries were surf breaks, which ones would you ride all day long?

Black Brewing is my go-to but I also like Bootleg Brewery. It’s a really awesome outdoorsy venue with grass and a dam and I like the style of eating; you order and get a jug of beer, get a number and away you go. Eagle Bay Brewing Co is great, too. I like the view down the valley. Everyone’s catered for, including kids. I like places I’m comfortable in.

Any plans to open a brewery yourself?

Anything’s possible. We’ll see how much people enjoy our beer. Maybe one day.

Where do you go to wine and dine?

Aravina Estate. I stop in there a lot, I love the venue and the food – a duck dish was my favourite for a while – and I love drinking their rosé. I’m a car enthusiast, so I like the car display too. It’s great that the owners actually drive them, they’re not just on display with no one touching them. I’m also a fan of Rustico at Hay Shed Hill. It’s a relaxed restaurant with a great tapas-style menu and fantastic sangria, and they serve Honest Ale. Windance Estate is another good one. I rate their wine, especially the cabernet sauvignon.

What are your top three local surf spots?

1. Yallingup main break, my home break. It’s pretty slopey and user-friendly, so it’s easy to surf but you’ve got to do a bit of paddling because you’ve got to cover a bit of ground. It’s good for the recreational surfer. I’ve taken Kelly Slater there and I’ve surfed with Jack Stein there.

2. Margaret River main break, also known as Surfers Point. It’s big, raw and powerful but it offers a really fun, big take-off and long, clean walls. It’s really fun to use a bigger, longer board, so you’ve got the paddle power and a bit of board beneath you. It’s one of the most powerful waves down here; it’s in the open ocean and it collects most of the swell from the south-west so it packs a bit of a punch. It’s also the most consistent, reliable break along the coast.

3. The Box. It’s a bit more expert level. It’s short, fast and intense, and there’s shallow, shallow reef and rocks. I’ve hit the bottom there before – nothing too serious but I’ve seen some bad accidents.

When it comes to surfing, everyone’s all about secret spots and I’m not going to give those away. There are so many breaks to choose from, and there are so many variables, such as the tide and wind direction, and the interval between the swell. You have to look at it on the day and make a calculated decision. I do a lot of off-roading with [three-time Australian world champion] Mick Fanning. We end up driving Cape [Naturaliste] to Cape [Leeuwin] trying to find waves. We joke that we did the Cape to Cape Track today – it stretches 135 kilometres long.

You were on stage for first time at the Margaret River Gourmet Escape in 2017. How did you end up cooking with Jack Stein?

I took Jack surfing for the documentary-meets-cooking show, Born to Cook: Jack Stein Down Under, which he filmed in Western Australia. We got along really well and kept in touch, and he asked me if I’d like to present my beer on stage at the Gourmet Village. I was a bit nervous beforehand, but between him and the MC, comedian Matt Okine, we carried on as if we were in the kitchen at home. He cooked dishes from destinations where you can surf including Mexico, the south of France and Indonesia.

The Gourmet Escape is now in its seventh year. What makes this food festival so special?

It’s cool to see what the south-west of WA has to offer. I’m proud to be West Australian, I love the area we live in, the lifestyle and the produce; it’s just awesome. Even though I’m surrounded by these things, there’s still more in the food and beverage scene that I’ve never heard of and I’m learning about them for the first time at Gourmet Escape.

Many visiting chefs say they fall in love with the local produce. Where do you source yours?

I love the Margaret River Farmers’ Market and I love The Shed Markets – they’re my two go-tos. I just go for the freshest, most organic stuff I can find. Avocados are my thing. I go through four or five of them a day. I just love them.