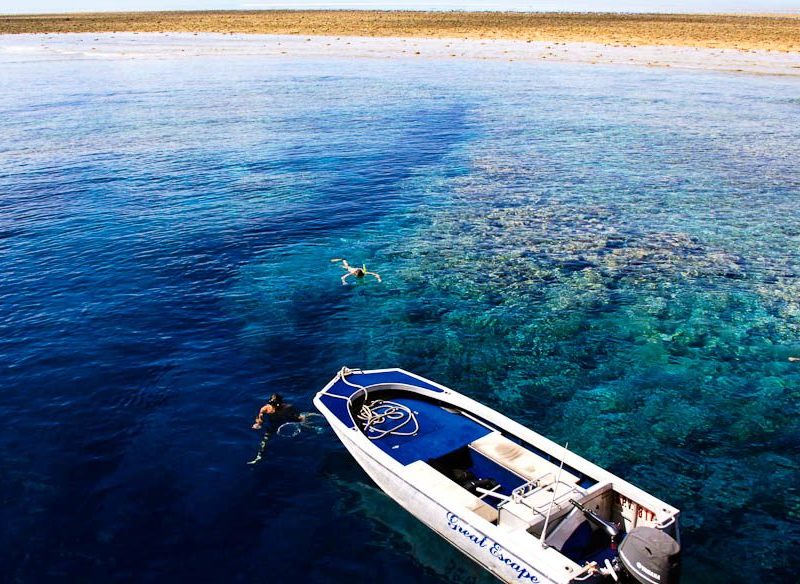 Maldives-like water clarity, Belize-quality diving and not a soul to be seen? Fleur Bainger finds it all in a day at WA’s little-known bucket-list destination Rowley Shoals

Could this be a day in paradise?

6:00am I’ve awoken to the splosh of water hitting my bedroom window, which might be alarming were I not luxing it up on a 26-metre catamaran aptly called The Great Escape. During my slumber, our gallant vessel has churned nearly 300 kilometres west, leaving Broome in its wake for our target: a trio of coral atolls known as the Rowley Shoals, spoken about in hushed tones by divers who’ve scoured the globe in search of untouched natural aquariums. Frankly, life’s tough, with a double bed, flat screen, private bathroom and a chef upstairs making me breakfast. Peering out my porthole, I see nothing but glassy, azure ocean. There’s no sight of land; not even another boat.

6:08am Er, should I be concerned about the lack of terra firma?

7:00am Wandering out to the main deck, I stifle a cry of delight. Judging by the delirious expressions of the other 13 guests, we’re all on the same page: this view is… wow. Perhaps to prove a point, a turtle glides past, shell glittering green and yellow. It pops its head up to gasp for air and gets a fright – I suspect luxury boats are rarely on its radar. Seconds later I’m in the 28-degree water, hovering as the turtle descends through shafts of blue light.

7:20am It mightn’t sound like it can get any better but it does: poached eggs, smashed avocado and fresh Kimberley mango are served. Oh, and chef Mitch has cooked with Tetsuya. It shows.

8.30am I’m floating, spread-eagled, over endless coral gardens that many argue trump the Great Barrier Reef. Having been to both, I’d have to agree. Mermaid Reef Commonwealth Marine Reserve is home to some 688 fish species, which cluster like suspended confetti over 233 corals. The living floor forms an undulating pastel carpet splashed with bright colour pops, visible through crystal clear water. I see my first rusty red Gorgonian fan as I tail a school of double-headed parrotfish, then spot a cluster of Christmas tree-like spirals: they’re tubeworms. Layers upon layers of corals resembling frilly can-can skirts and truffle cross sections and mushroom undersides give way to tide-driven channels that suck water through, like a rivermouth pouring into the sea. Drift snorkelling, here I come.

9:00am A weak current has me wondering what this ‘flying through the water’ caper is all about. Then the water surges, and I’m coasting over cobalt blue staghorn coral, butterfly fish and star spangled sea slugs. My eyes pop at a giant clam with Angelina Jolie lips, only to see dozens more moments later, sprinkled through the underwater valley. Peach anemones envelop clownfish in their swaying fingers. Nemos never get old. They. Are. Unbelievably. Cute.

12:00pm Lamb chops and tropical salads for lunch. I could definitely get used to this.

1:00pm There’s a flurry of tank lifting, clasp snapping and watch-setting as the divers prepare to plunge. They’re aiming for a 40-metre descent, to where purple coral and elusive hammerhead sharks lurk. I’m no longer fazed I don’t have my PADI certificate.

1:30pm Rather than swim solo – I’m the sole snorkeller (though my posse grows as the week progresses) – I splash in with two obliging crew.

1:42pm It’s like all the sea-dwelling creatures I’ve always wanted to see have come out to play. Alright, there are no mermaids, but I freestyle over a massive moray eel out of its burrow, sight a huge cuttlefish that flicks on its camouflage and discover a three-metre tawny nurse shark, sleeping. I’m not sure who’s more shocked. It leaves a cloud of sand in its wake and my heart racing. Then, serious pay dirt: chef Mitch spots a baby lionfish, a shy but showy fish with tiger stripes and long, feathery fins. It’s seven metres below, darting around like an inquisitive puppy.

2:55pm Back on deck, our knock-about skipper Jez spots a pod of spinner dolphins, so named for their torpedo-like acrobatic moves when they launch out of the water. Their shiny, tri-coloured skin and playfulness captivates us all.

3:20pm I see no point in changing out of my bikini. Why bother, when there’s a spa on the front deck, where you can not only have a dip but sip cold beer, brag about the day’s sea-life sightings and nibble on basil-wrapped, deep-fried prawn wantons? Yawn.

6pm Phosphorescence is one of my favourite things, but I reconsider its charm when it attracts a passing shark. We’ve ventured into the sea for a night snorkel, feeling vulnerable but elated. But it’s a reef shark, so the only threat is psychological and as we relax, torches switch off in exchange for moonlight that dances on the shallow sea floor. It’s like a botanic garden of living, wandering plants in block colours, motionless fish and floating crustaceans. There are tassels and reflective dots, enlarged eyes and transparent shells. It’s like watching a David Attenborough documentary.

8:45pm I consider organising a mutiny, so that I never have to leave.

Getting there: Qantas and Virgin get you from most of Australia’s capital cities to Broome, from where cruises depart. Airnorth also services Broome from Darwin, Kununurra, Karratha and Port Hedland.

Playing there: The Great Escape Charter Company has five and seven-night trips departing each November from Broome. The trip is suited to both snorkellers and divers. All diving gear must be brought or hired in Broome, but tanks, air and weight belts are supplied.

Need to know: Other operators that visit the Rowley Shoals from October to December, include True North, K2O, Odyssey Expeditions and Kimberley Expeditions. The Great Escape is the only boat that can enter the coral gardens, while the others moor outside the reefs and enter via dinghies.

Staying there: Each stateroom is equipped with a queen-size bed (or twin singles), ensuite, flat-screen television, DVD player and air conditioning. Wi-fi access can be purchased onboard. 2013 prices range from $4120 per person twin-share in a Horizon View Stateroom for five nights, to $6770 for seven nights in a Panoramic View Stateroom. There is limited availability for this year; cruises for 2014 are available to book now.