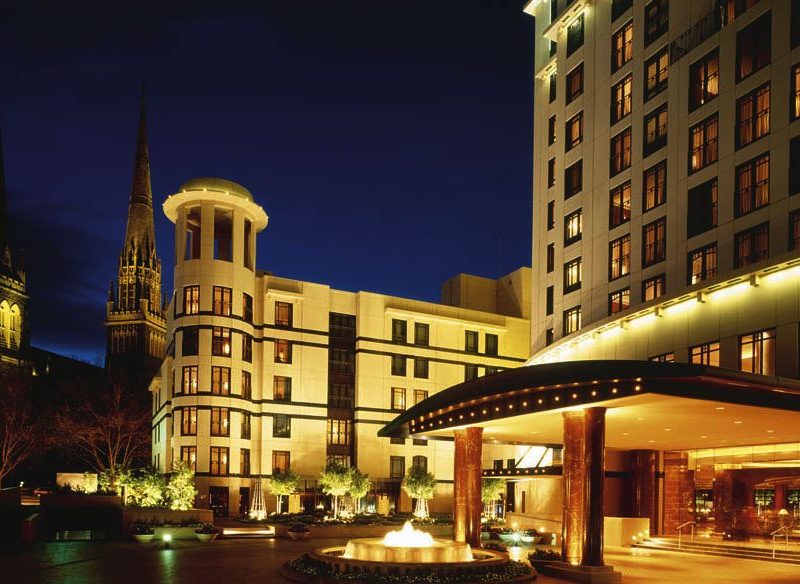 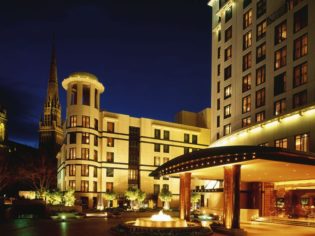 Which one does it for you – Melbourne’s five star Park Hyatt Hotel or the city’s heartless heart – Crown Casino?

Did you know there are two Melbournes?

Hang on, that can’t be right, can it? Every visitor to Melbourne will tell you that Melbourne is a 500 metre stretch of Yarra Boulevard known as “Crown” – what else could there be?
But there is another Melbourne.

In the rush to turn Melbourne into Vegas-on-Yarra, it’s easy to forget the East end of town, full of Olde Worlde style, theatre and café culture. To fully experience Melbourne’s split personality, my wife and I (after working extra jobs to afford it) booked ourselves into the ultimate symbol of cultured cool in Martini-sipping Melbourne, the five-star Park Hyatt Hotel – but then for the contrast, we made a reservation up the other end of town, at Melbourne’s flashest Japanese restaurant, Koko’s, bang in the heartless heart of Crown.

As if on cue, both our destinations served up events that weekend. At the Park Hyatt, it was the Australian Maternal Health And Child Nursing Convention, a gathering of 650 delegates getting to grips with issues at the core of life itself. Meanwhile, over at Crown, it was something much more important – the Logies.

Up in the elm-tree-fringed East-end, however, you wouldn’t know that every wannabe celebrity was in town. Walking into the Park Hyatt’s atmospherically-lit teak and marble art-deco interior is somehow like being enveloped in rich, dark chocolate. Its entrance is everything Crown isn’t – a tree-lined, secluded boulevard (unlike Crown’s entrance, where, should one of the Logie stars happen to stray off the red carpet, they’d probably be hit-and-runned by a drunken debt-evader fishtailing his Commodore out of the car park.) We sit in the cosy foyer lounge for some High Tea and I look out past the nail-clipper-perfect gardens, imagining a Logies-style arrival for the Maternal Health delegates, dressed by Portmans, sporting surgical, not Hollywood tape. It’s easy to daydream in this quietly confident monument to understatement. Outside, Melbourne bustles on, but in here, you can almost forget the sound of your credit card groaning.

At $388 per night (the “cheap” rate we got through wotif.com, which turned out to be no cheaper than booking direct with the hotel), you’d want something pretty flash … I dunno – say, a TV in the bath? You got it, plus His and Hers glass basins, a separate toilet so you don’t have to see each other during those less romantic moments, a huge spa, three separate shower heads, including two at back height, so you can massage yourself to the tune of next summer’s Stage One water restrictions, and of course, a phone in the loo. Mind you, if someone ever phones you from their room at the Park Hyatt, ask them to finish what they’re doing and call you back …

The “Park Deluxe Spa” room has 60 squares of living room space, with a sofa and armchair so you can sit back and thumb through appropriately musty hardbacks by Bernard Shaw and Winston Churchill, but also modern touches, like automatic Do Not Disturb signs, and the very “today” bar fridge prices.

And just to top off the impression of the Park Hyatt’s lounge-lizard chic, in the impressive multi-mezzanined restaurant/bar known as “Radii”, there’s a cigar room – which is even darker than the already “muted” tones everywhere else. The armchairs are (what else?) finest-quality leather, and rather reassuringly, the air con is the only thing working hard.

But soon it was dinner time, and time to taxi from Melbourne’s Paris end to Melbourne’s “Paris Hilton” end. Come to Crown Casino and see how the other half live – and I don’t mean the rich half. Whilst Crown incorporates its own very expensive hotel – right now full of TV celebs – and our equally expensive dinner location, it also is a regular home to the needy and greedy. Nowhere is Crown’s personality more aptly defined than in the main walkway, where on one side you have Louis Vuitton, Prada and Versace, and about ten feet away on the other side of a partition, single parents putting their child allowance money into poker machines. Crown is an ant’s nest of noisy crowds, with more than a soupcon of “Saturday Night’s All Right For Fighting” restlessness in the air. Even three floors up, as we left the meat market and entered Koko’s restaurant, we still couldn’t escape the crowds.

At Koko’s we spent $200, and the food was good – but was it THAT good? Perhaps it was worth it for celebrity-spotting: Keith Urban and his urbanely skinny girlfriend sat at the next table. At other tables, Logie host Andrew O’Keefe, the (skinny) girl from Saturday Disney, a surely famous table full of boys with identical hair and Chernobyl-tanned (skinny, of course) girls including one whose teeth were so whitened we could have managed without the house lights, and I’m sure I nearly head-butted “Our Lleyton” on my way into the Men’s. We even saw people we knew! And that’s just my point about Koko’s.

Despite being Melbourne’s most expensive Japanese restaurant, it’s still like Coles Cafeteria, with the next romantic couple so close they had to text message their sweet nothings to each other. And no handies under the table, either, because any minute the restaurant will light up thanks to Crown’s hourly display of how to spend the entire Australian Maternal Health And Child Nursing annual budget on a giant outdoor gas flame explosion. Unfortunately, we only saw one of these, because we were in and out before we could blink. Guess that’s how you eat when you’re a skinny Logies type.

But we made up for it next morning at the Park Hyatt’s oh-so 1930s New York buffet breakfast in the Trilogy Room. As we made our seventeenth trip to the hash brown plate, I glanced over at the next table (a refreshingly long way away) and saw a girl, all tan and white teeth, who, amongst this cornucopia of hot breakfast options, chose only a bowl of All-Bran.

I guess she’ll be staying at Crown, come next Logies time.