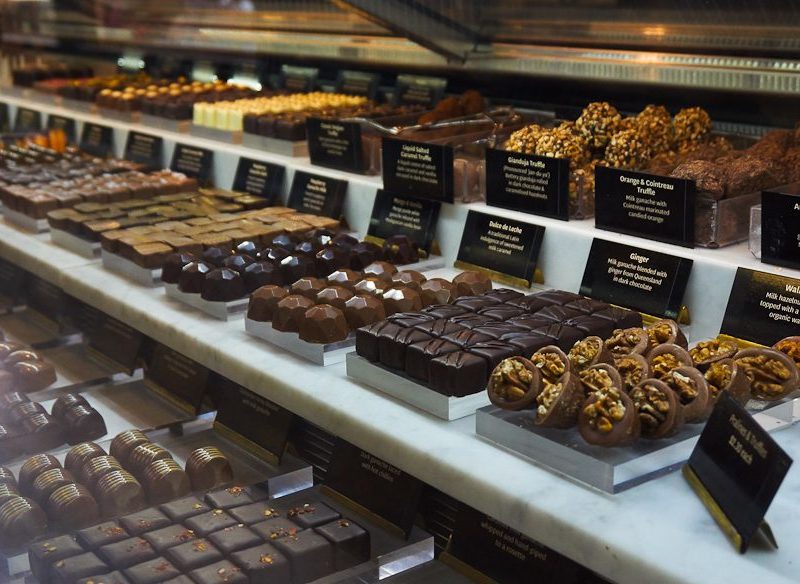 Melbourne and San Francisco are the chocolate capitals of their respective countries. Hannah Foster sets out to determine which city is really raising the (artisan chocolate) bar, reviewing and comparing the best chocolatiers in both cities. San Fran or Melbourne…

Melbourne and San Francisco might be 12,000 kilometres apart, but they have a surprising amount in common. Both often referred to as their country’s most ‘European’ city, they enjoy thriving multiculturalism and a competitive foodie culture. And, happily for chocoholics, both cities have a well-established artisan chocolate scene. But when their chocolatiers go head to head, let’s see which city comes out on top.

Stepping into this bright and feminine space, the smell is not that of your typical chocolate store – instead there’s chai spice, camomile and a hint of coconut. That’s not such a surprise since Pana Chocolate specialises in raw, organic, dairy-free, refined-sugar-free chocolate blocks and eye-catching single serve cakes. Exciting bite: With exciting products like its raw lamington, it’s no wonder this little Melbourne company has 150,000 Instagram followers.

5. Cacao (City, St Kilda, Doncaster and Highpoint)
Cacao’s décor is as eye popping as its product range, but if you can look past the bling, its individual chocolate selection ($2.10 each) is well made. The ‘Apples’ chocolate is a good choice, made with milk chocolate ganache flavoured with calvados and cinnamon, enrobed in dark chocolate and decorated with a pretty white floral transfer.

Inspired by the fresh ingredients available at the Ferry Building markets where Recchiuti Confectioners now has its flagship store, the founder, Michael Recchiuti, started experimenting with different infusions and classic European chocolate making techniques. The result is his beautifully presented store with a wide range of individual and boxed chocolates, bars, dragées and snacks. Moreish: His Malted Dark Milk Revolutions are like Malteasers for grownups!

These guys give Monsieur Truffe a run for their hipster-cred and challenge Mörk for hot chocolate supremacy. You can enjoy small batch single origin bars and a hot chocolate in their café on Valencia Street while watching the bean-to-bar chocolate making process occur in Dandelion’s factory on the same site.

Founded by former tech publishing millionaires, Tcho produces ‘New American Chocolate’ which is made in San Francisco and shipped and sold nationally. With a slick website (naturally), modern minimalist packaging and clever tasty organic products. You really have to: TCHunky TCHOtella bar with hazelnut butter and sea salt, making Tcho a must-try for the full San Francisco foodie experience.

CocoaBella is a chocolate store rather than a chocolate producer, stocking a beautifully curated range of chocolates from both Europe and America. They’re one of the few places in San Francisco that you can try American chocolatier Christopher Elbow’s range. His chocolates are brightly coloured, brash and full flavoured. If you had to pick one: The strawberry balsamic-filled chocolate is incredible.

Ghirardelli Chocolate, now a large and hugely popular chocolate brand in America, is one of San Francisco’s most famous and successful exports. Founded by a European immigrant who moved to San Francisco during the gold rush, Ghirardelli is now famous for its individually wrapped filled squares. The chocolates are generally very sweet and lack some of the love that small batch products enjoy, but they are still crowd pleasers with a lot of American charm.

And the winner is…

Both cities have a lot to offer chocolate lovers, but which city comes out on top?

An escapee from corporate law, freelance travel writer Hannah Foster is a Melbourne local who blogs at northmelbournelife.com and contributes to a number of other lifestyle publications.