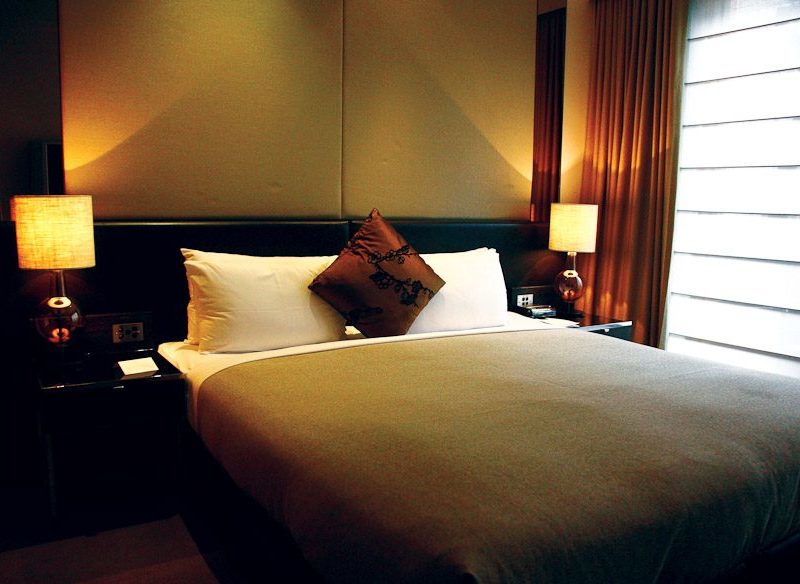 Built inside a former Rolls Royce showroom, the ultra-chic Royce Hotel in Melbourne has received so many conflicting reviews that Tom Barclay had to go check it out for himself.

In choosing to name their hotel after the building’s former commercial tenants, The Royce is setting some fairly lofty expectations. A Rolls Royce isn’t just a flashy, expensive car – it’s an elegantly handcrafted machine with some serious grunt, space and the most discerning of clientele. Can a boutique hotel in Melbourne usurp the name and deliver a hotel in the same vein?

A quick look on the Trip Advisor website would suggest the Royce Hotel should close its doors. Seldom have I seen a hotel so vilified by the travelling audience. In more than 27 online reviews it has accumulated a paltry two out of five stars. The last five, from residents purporting to be in Sydney, Wellington NZ, Dubai and Melbourne, awarded it just the one star. Blonde_from_Sydney seemed to speak for everyone: “I will never return to the Royce. I will never recommend the Royce. This hotel is marketing itself well beyond its means. It is a 3 star hotel at best and should be upfront in marketing itself that way.” With this kind of withering criticism, I had to check it out.

I found the Royce to be more RAV 4 than Roller. Dependable, but lacking real guts to match its body. Entering the lobby from the street, the setting is grand. Two engraved light posts mark the entrance, giving way to a set of light fixtures that illuminate your path like a runway.

The reception area unfolds with a high ceiling, two dark, dangling iron chandeliers and a glittering, gold mosaic-tiled reception desk helped by a velvety red wall behind the reception staff.

The real winning feature of the lobby is its elegant, curved staircase, which sweeps grandly around the wall opposite reception to the Grand Ballroom above. But the staircase and ballroom aren’t used by guests, so are all titillation and no satisfaction.

The final design feature of the lobby is the circular atrium between the guest rooms, the lobby and the restaurant/bar. Turn left and follow the stylish, striped, chocolate and orange carpet for the guest rooms and elevators, or turn right for the bar and restaurant.

The atrium is bordello chic with a round, red, velvety sofa in the middle that looks just like a jelly mold, but more plush than bounce. Continuing the bordello theme, the walls are covered in ceiling-to-floor mirrors with ornate, wall-mounted lighting that clashes with the simple hoop chandelier above the sofa.

The bar, the Amberoom, is all funky chairs in deep warm browns and blacks, with flashes of colour to be found in the lampshades and ample mood lighting. Another simple trick increases its cool value: silver beads in front of a wall-length mirror. The restaurant is different for its brighter lighting, starker colours and pale wood tones.

A quick walk through the public areas gives you the feeling this is a boutique hotel of promise, and perhaps explains why The Cool Hunter gave the refurbed lobby the big thumbs up.

When I checked in, the lobby hinted at great potential. Walking to my room, the sound of the laundry door kept open was a little off-putting. Possibly this laundry door is hard to close since it was left open, belching industrial noises down the corridor, throughout most of my stay.

My room was severely underwhelming compared to the modish, ultra-stylish public areas. The large bathroom’s distinctive features were reddish-brown tiles that felt like cheap terracotta rip-offs, and no bath. The in-room furniture was neither pleasing nor displeasing, except washed in a faded lime that became irrationally annoying as time went on. The toiletries certainly weren’t as lofty as an Aesop or Molton Brown (staples of all aspiring boutique hotels). It was just another acceptable room.

The restaurant, dish, seemed to follow suit. My chilli prawn spaghetti was very enjoyable, but I didn’t get to finish it since my partner’s mushroom risotto was so disappointing I ended up doing the right thing and swapping halfway through. It reminded me of the mushroom sauce I always turn down at the local pub. How can mushroom risotto become so gritty? The waiter took it back half eaten without batting an eyelid.

On checkout I asked to see the other rooms “for a future stay”. The three I saw were refurbished in line with the lobby and public areas of the hotel, with magnificent, deep brown furnishings and clean, modern bathrooms. The larger suites had plasmas built into their bathroom walls. This was the cool promise the Royce had failed to deliver. Pity only 29 of the 100 rooms are to this standard.

On a final note, Trip Advisor can be a great tool. But sometimes, as in this example, the criticism is far too stinging for the product and raises questions about the intentions and backgrounds of its reviewers. In my experience, the Royce is overselling itself as “one of Melbourne’s finest designer five star boutique hotels”, but it’s not a three star disaster either.

* Like all AT reviewers, Tom visited the Royce anonymously and paid his own way. He found a good rate of $199 inc breakfast, but says “if I’d paid any more I wouldn’t have been happy.”