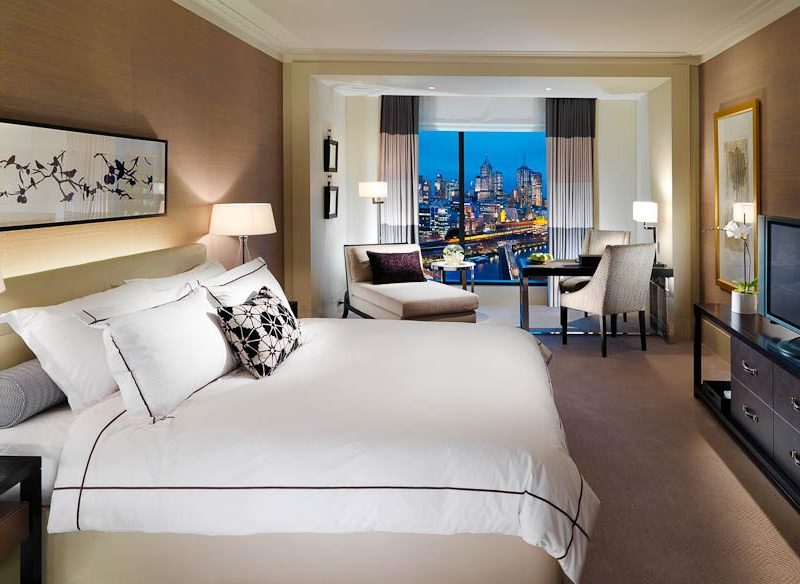 Few things are as lovely as playing tourist in your own town, so when the boss at my previous job offered our small team a night ‘in’ and a night ‘out’ for a job well done it required a micro Geneva Convention to agree where we would lay our heads.

However Melbourne’s strengths in the boutique and curated (as opposed to the mass-produced and flashy) were soon forgotten when whispers began to circulate of Crown Towers’ bathtub televisions and impossibly soft robes. And if we’re doing glam, we’re going the whole way.

Much to said boss’s dismay, nothing about the Crown Towers experience is budget. The taxi is barely parked before our luggage is swiftly removed, the hotel’s heavy glass doors are opened and we’re ushered into the grandiose foyer. It’s remarkable how much more glamorous you look underneath a ludicrous crystal chandelier the size of a small car.

After check-in it’s off to the 16th floor, which, I’m sad to report, is not where the infamous Towers Suites are found, which Tom Cruise and Katie Holmes were rumoured to have had completely refurbished for their several month stay in 2009. Rather, we’re booked in to one of the 188 entry-level Deluxe Rooms.

However, Crown certainly brings a new meaning to ‘entry level’. Depending on what side of the hotel you’re located, panoramic views of the city or the bay form the backdrop of your experience (and what a nice backdrop it is). As someone who’s been crushing on Melbourne since wearing acid wash was acceptable, my love for the city is stronger than ever as I admire her good looks through floor-to-ceiling windows.

But first thing’s first – to the bathroom in search of the promised bathtub-television combo. Suddenly the prospect of actually leaving the room seems foolish, as opposed to a far more sensible evening of bath bubbles, boozy bubbles and trashy television. The rest of the room has a distinctly old-world understanding of luxury, with oak furnishings and glossy marble finishes. The kind of décor you’d expect in a federation mansion bought with old money. The king beds alone seem so large that in order to have a conversation from either end, you’d need to shout. And although the pillows look uncomfortably large, the down filling makes for heavenly clouds for weary heads to rest upon. I’m starting to see why Towers was crowned Australia’s best hotel this year at the Asia Pacific Hotel Awards.

But it’s not all plump pillows and high thread counts. Feeling bold I slip into bathers, wrapped in the über soft robes provided (again, the rumours are true) and head up to the pool area. It’s much more a mini retreat in itself. But despite the steam rooms, spa, gym and rooftop tennis court, I opt for a sunlounge to do, well, nothing.

Later that evening our group reconvenes downstairs for a cocktail at The Waiting Room, formerly a Neil Perry enterprise. It has since been reabsorbed by the hotel and has longer opening hours but the jury is still out about whether the absence of Perry’s influence has harmed the bar. But if you pay a little extra, you can access the Crystal Club, the exclusive lounge where many a celeb has been spotted over the years, including Jerry Hall and Portia di Rossi.

Towers is no stranger to hosting stars. As somewhat of a Melbourne institution, she’s become the standard backdrop for major award nights from the Logies to the Brownlow Medal.

But for all the big names and ornate touches, she’s not as fresh faced as her younger sister Metropole, nor as thrifty as her more budget-conscious cousin Promenade. She’s Sofia Loren to Metropole’s Megan Gale. A little older, a little wiser and unapologetic about wanting the luxuries life has to offer. Yes it comes with a $300-plus price tag, but it’s worth the bathtub experience alone.

The verdict: If you want to treat yourself to urban luxury, do it here. New world glitz meets old world elegance.

We rated: The television in the bathroom, the high-end finishes and unapologetic attitude towards luxury.

Notes: Prices start at $299, however even the entry-level rooms feel luxurious and special.