All Aboard the Harrington Glen Train House 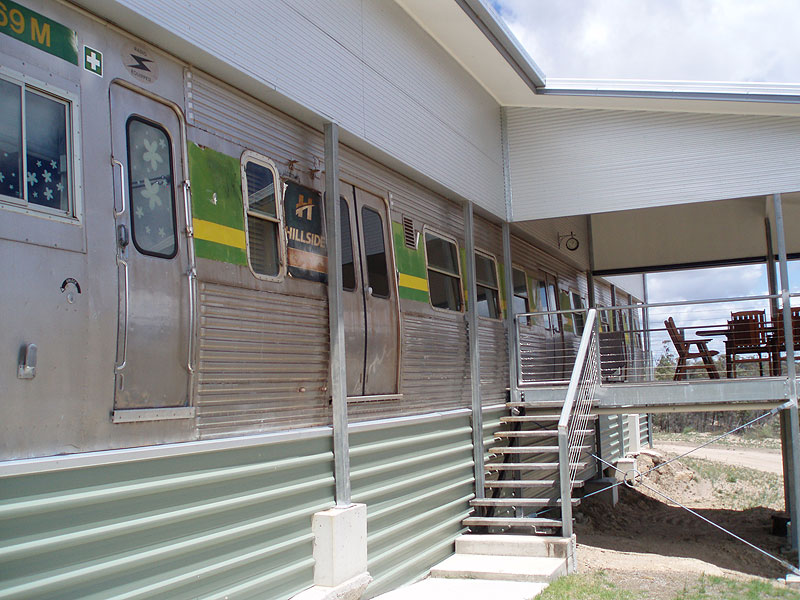 An unusual new holiday accommodation option has jumped the tracks and landed in a winery in Queensland’s Granite Country, writes Liz Cameron.

If you’re into quirky accommodations, have we got the place for you. The Harrington Glen Train House is exactly what it sounds like – a train carriage that’s been converted into a three-bedroom holiday house that accommodates up to six people at a time.

The carriage is originally from Melbourne, where it was one of the 20 originally purchased by a Molong man from Victorian Railways. Then, in 2007 when he was taking his grandson to the Dubbo Zoo, Harry Ireland saw the carriage, bought it and spent two years restoring and converting it. (And in case you’re wondering, a second-hand Melbourne train carriage costs about $15k, delivered).

When it arrived at Harrington Glen late one Sunday evening in 2007, the 23m-long carriage was covered in graffiti and grime – and didn’t fit through the property gates. But, with the help of a home removalist and a crane, it was soon installed in its current location atop a hill, where it stood for six months while various landscaping activities occurred at its base. It was then stripped, cleaned, insulated, lined and carpeted. Then a balcony was added to the front and major extensions to the back – including undercover parking for three vehicles and wheelchair access.

The completed Train House finally opened in May 2009, overlooking Harrington Glen’s nine-acre vineyard south of Stanthorpe in Queensland’s wine capital, and so far bookings and interest have predominantly been via word of mouth. Now it’s a long way from being the run-down train carriage it once was – all furnishings within a very luxurious, with a basket breakfast of bread, eggs, fruit and yoghurt included – and during your stay there you can also sample the Harrington Glen wines, since you’re right in the heart of wine country.

So if you want a stay you’ll always remember, the Harrington Glen Train House is perfect – it’s a little bit of luxury in a highly unusual setting.