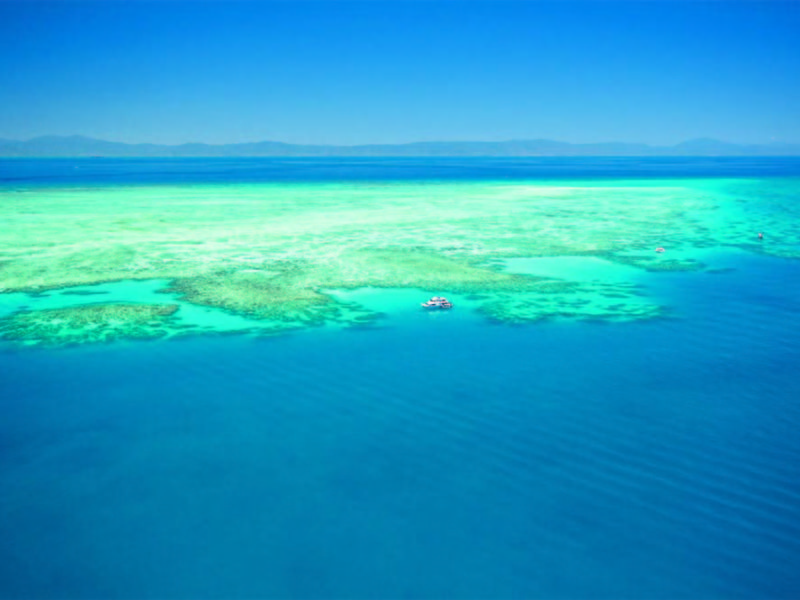 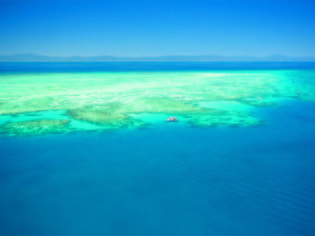 The Great Barrier Reef Marine Park is the largest tropical reef ecosystem in the world.

We all know it’s big, but let’s break it down into numbers. Extending 2300 kilometres, from Bundaberg in the south to beyond Cape York in the north, it spans more than 300,000 square kilometres, making it larger than New Zealand. In fact, along with the Great Wall of China, it is one of the few landmarks visible from outer space. 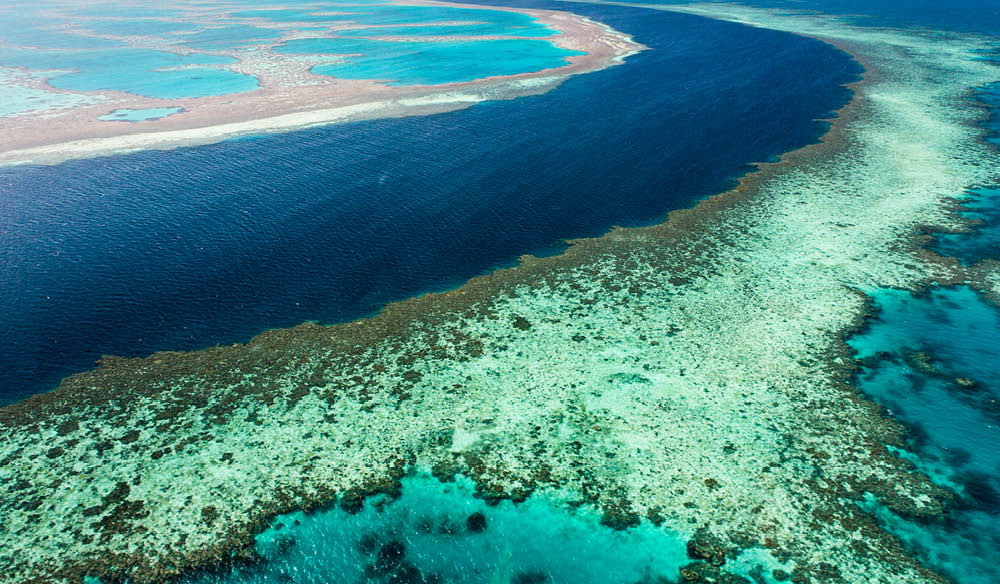 Flying over the immense turquoise skeins of this World Heritage-listed wonderland is the only way to come to terms with its size. It could take a lifetime to explore the reef’s vast swathes and meet all its marine life. Known for its extraordinary marine diversity, the system is home to some 3000 individual reefs, 600 species of coral and an estimated 1625 species of fish. The easiest way to marvel at the vivid coral gardens is through a glass-bottomed boat. For a close-up view, try snorkelling, scuba diving or kayaking around a coral cay, wading offshore among emerald parrot fish; watching clownfish snuggle in anemones or joining manta rays winging through the deep. You can charter a plane or yacht, take a cruise, go bareboating, set off on a wilderness island trail – or simply kick back at an island resort, cocktail in hand. 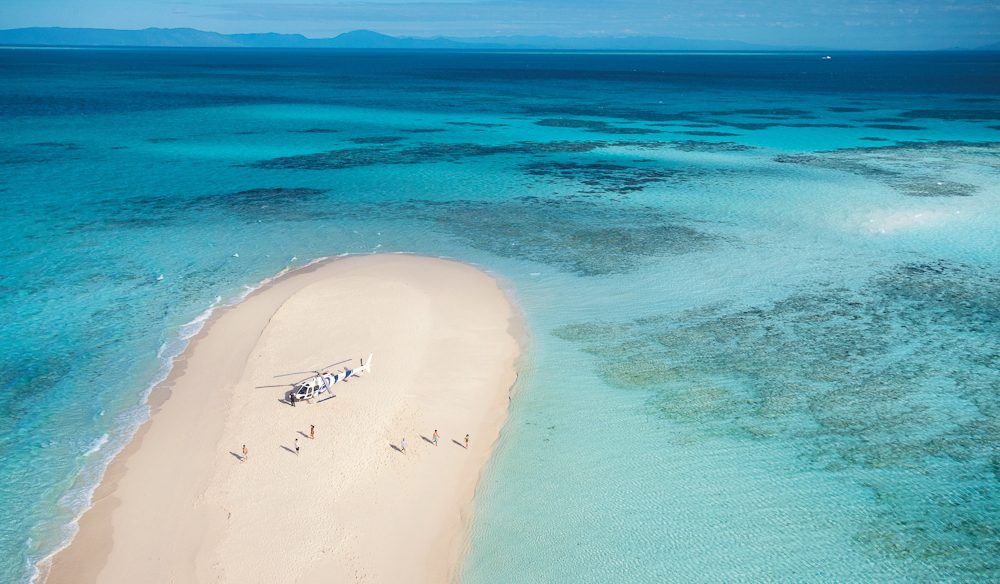 A stroll on the Vlasoff sand cay.

Speaking of islands, did we mention there are more than 100 to choose from? Take your pick from Green and Fitzroy near Cairns, and Hinchinbrook and Orpheus islands further south. Then there’s Magnetic, Hamilton or Hayman… With so many options, it really is the ultimate place to escape.

Researchers have compared the haunting calls of the dwarf minke whale to the signature chord from Beethoven’s Fifth Symphony. You can hear this extraordinary sound on a four-day expedition to meet the minkes, led by marine scientists. These fascinating encounters take place during June and July, when pods of minkes congregate on the outer ribbon reefs. The whales are astonishingly curious, gliding and cavorting around snorkellers, hovering at shallow depths and eyeing swimmers intently for hours on end. Unforgettable. See Marine Encounters; 07 40985417.

Sit in the sand under a canopy of stars and watch as huge turtles lumber up the beach on Heron Island. If they are undisturbed, these ancient animals will laboriously dig holes to lay eggs. It’s just one of the wildlife experiences your family can enjoy together on Heron, which is accessible by boat from Gladstone. 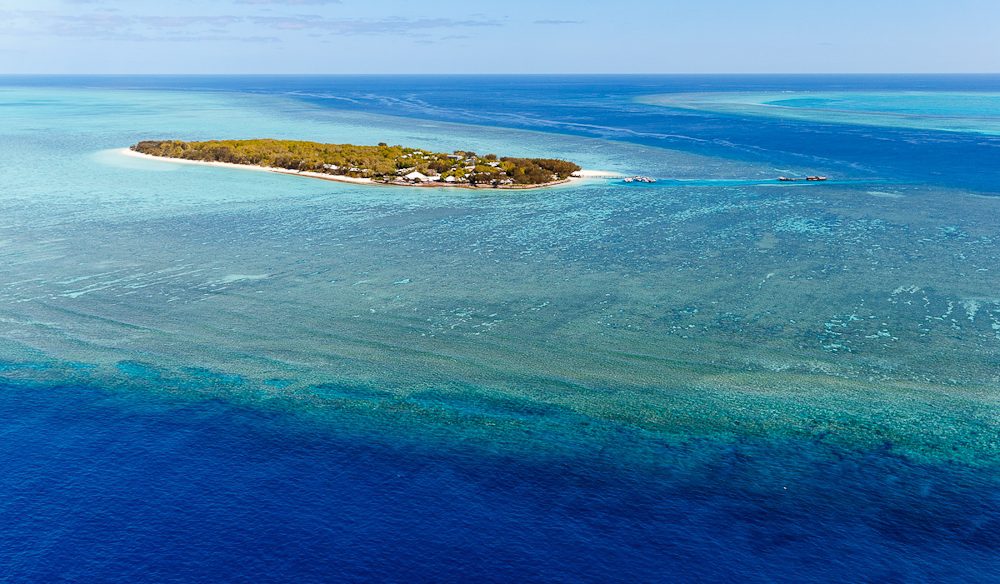 The island is a Jurassic park of creatures – ray and reef sharks gather in the shallows, mutton birds wail like ghosts from their burrows and, in early summer, the trees are filled with nests containing black noddy tern chicks. During school holidays, kids can sign up to the educational Junior Rangers program to take part in exciting activities like reef walks. 03 9426 7550.

It’s a Valentine’s gift you’ll never forget, or a super-stylish way to elope… Flying over the Whitsundays in a seaplane, swooping down to photograph the iconic Heart Reef. This perfectly heart-shaped wonder is one of Mother Nature’s most romantic creations, inspiring more marriage proposals than the Eiffel Tower. 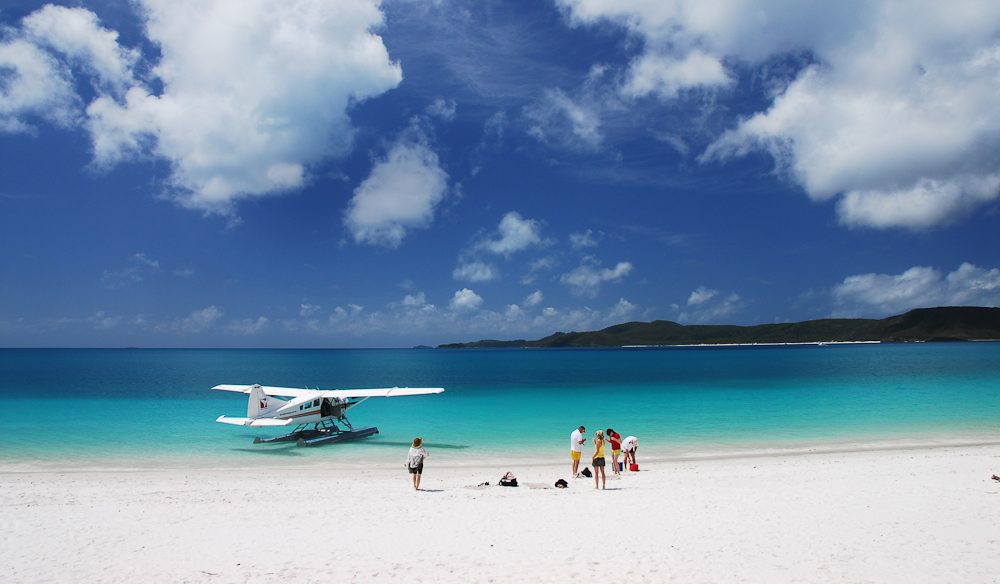 The plane can then zip you, your beloved, a celebrant and a bottle of top-shelf bubbly over to the powdery sands of world-famous Whitehaven Beach to say, “I do”. Or take a Panorama tour, enjoying a flight over the Whitsunday islands, with a stopover at Whitehaven Beach and a glass-bottomed boat tour. Air Whitsunday: 07 4946 9111.

Adventure: Into the Blue

Scuba divers get misty-eyed over the Reef and its marvellous marine life. If you want to dive or snorkel, join a live-aboard vessel along the outer reef or take a day trip on a boat, catamaran or seaplane. The ribbon reefs off Port Douglas are a favourite, while diving the wreck of the SS Yongala by Townsville is bucket-list material. An adventurous option is the “sex on the reef” dive, timed to coincide with the annual mass coral spawning, which usually occurs around November. The dive takes place at night – if you’re lucky, you will witness the drama of corals spawning simultaneously, allowing you to swim through a salmon-pink, underwater snowstorm. See: Prodive Cairns; 07 4031 5255.

Qualia, on Hamilton Island, is one of those exclusive stays favoured by supermodels and TV stars – a haven of opulence and style. You could be tempted to hang out in your pavilion most of your stay, plunging into your private pool and gazing at the 180-degree view over the Whitsundays, but you won’t want to miss the resort’s daily activities, which are a notch or two above the norm. 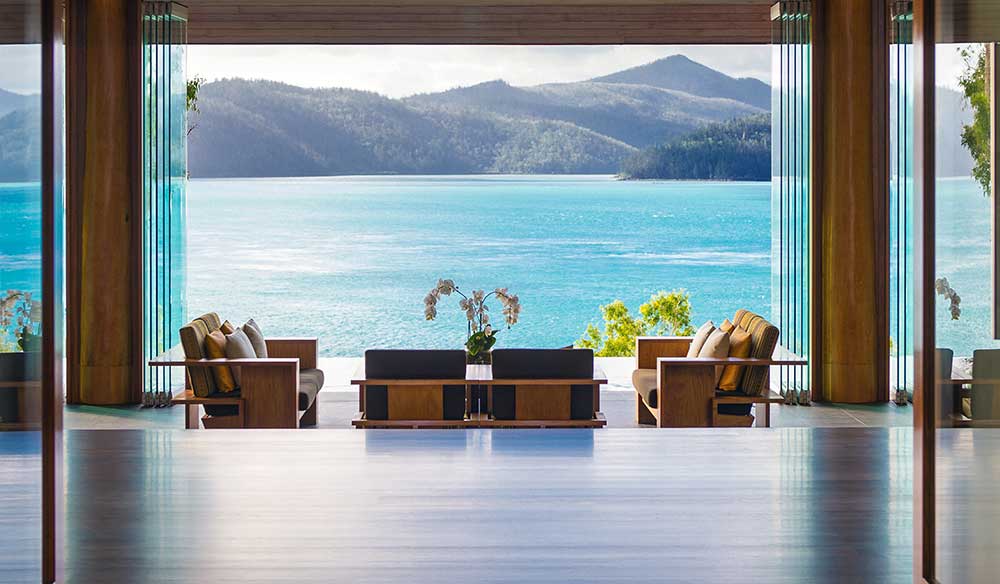 Take a luxury cruiser out to the reef or hop on a helicopter and fly to nearby Dent Island for a round of golf. The annual Hamilton Island Race Week brings salted yachties and the glitterati to Qualia, and gourmands relish the Great Barrier Feast weekend – a chance to sample fare from the world’s greatest chefs. Phone: 07 4948 9222.

Imagine digging your toes into the sand on a deserted beach, while dining on a bespoke, seven-course degustation meal; the night sky lit by stars and flaming torches. This is just one of the gourmet experiences on offer at Lizard Island. 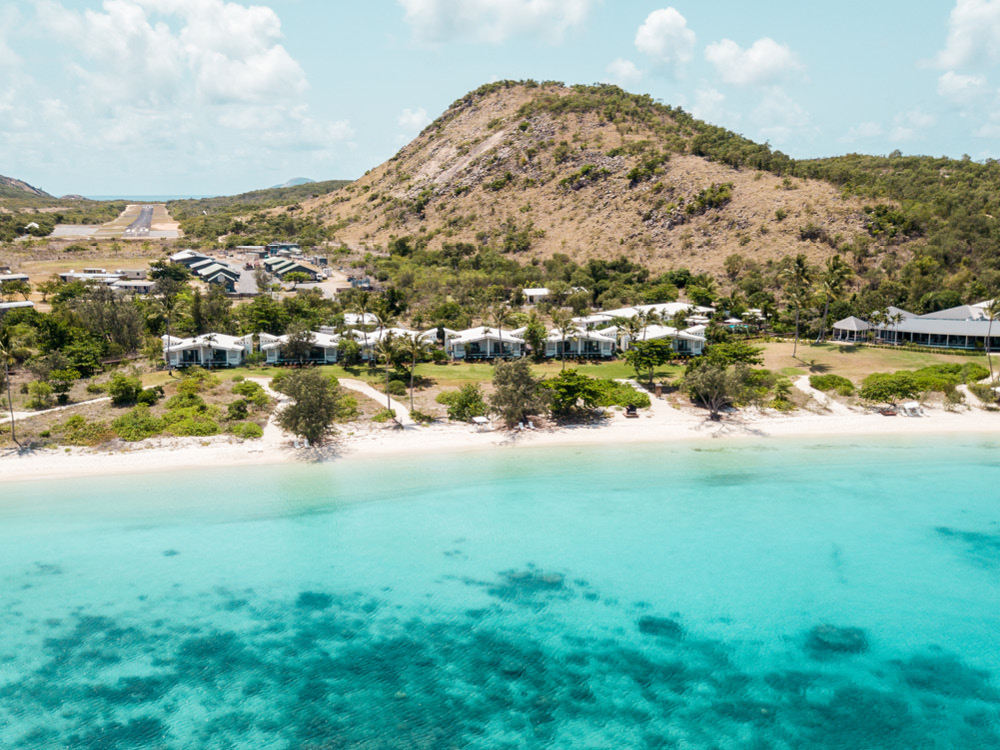 The granite-capped isle, named after the resident goannas, is the ultimate luxury escape on the outer Great Barrier Reef. If you’re more of a morning person, the resort will prepare a private picnic basket filled with gourmet and fresh food and deliver it (and you) by dinghy to one of the island’s 24 deserted beaches. Bliss!Phone: 03 9426 7550.

Unpretentious is how Lady Elliot Island Eco Resort likes to describe itself, but that might be a tad humble. This 41-room resort sets a fine example of how to lessen your impact on the environment, and is the first Great Barrier Reef tourism operator that allows guests to become “citizen scientists” by taking part in research into the reef and the island’s manta rays. 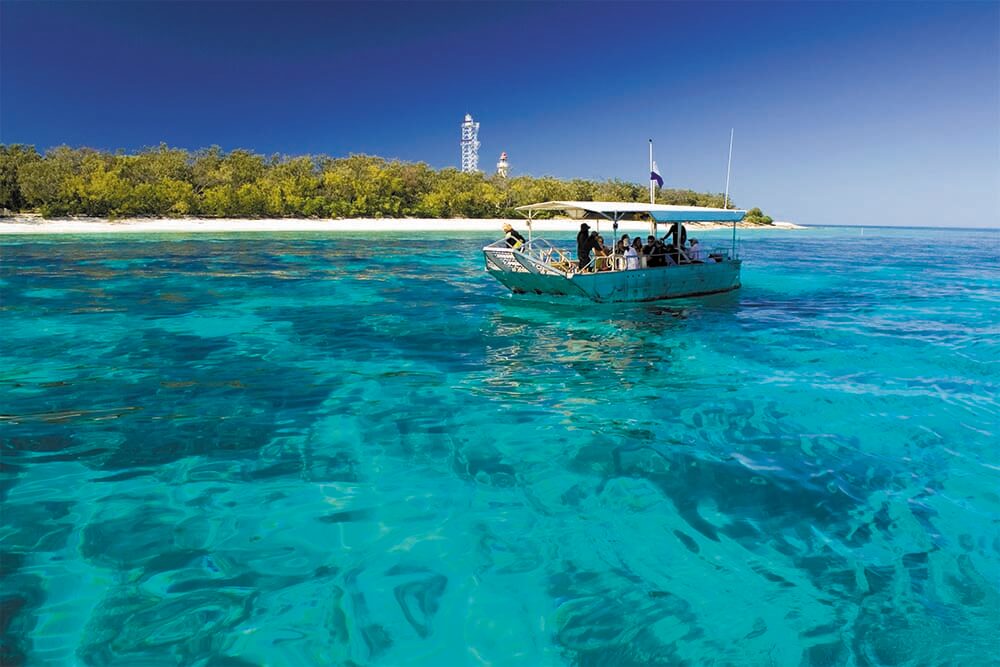 Have full viability in one of the amazing glass floor boat

Lady Elliot is the closest Great Barrier Reef island to Brisbane and just 42 hectares in size – so small you can stroll around it in less than 45 minutes, snorkelling, swimming, reef walking or even watching turtles hatch. Later, you can upload your photos and observations, which in turn, help to monitor the state of the reef. Phone: 07 5536 3644.

Fly to Cairns, Townsville, Bundaberg, Rockhampton, Hervey Bay (for Lady Elliot Island) Proserpine and Mackay or direct to Hamilton Island. Take a ferry, helicopter ride or small plane to your destination or do day trips to the reef from mainland towns.

Seafood and tropical cuisine abound. Cairns, Port Douglas and Hamilton boast steakhouses, Asian eateries, tapas and pizza. On some islands, choice is restricted to resort restaurants. Most hotels have a restaurant or café, and luxury resorts offer lavish degustation dinners and gourmet experiences.

Mainland hubs Cairns, Port Douglas, Mission Beach, Townsville and Airlie Beach have hotels and self-catering options. Camp on Lady Musgrave or Hook islands, glamp on Wilson or live large on others at a luxury resort. Prefer to float? Stay on a live-aboard dive boat or a yacht. 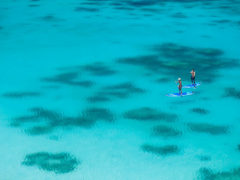 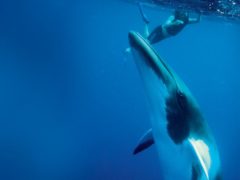 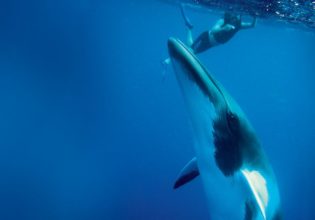 Diving in deep with the Barrier Reef’s minke whales

An encounter with the Queensland's dwarf minke whales is a wildlife experience forever close to Georgia Rickard's heart. As a rule, the great wild...