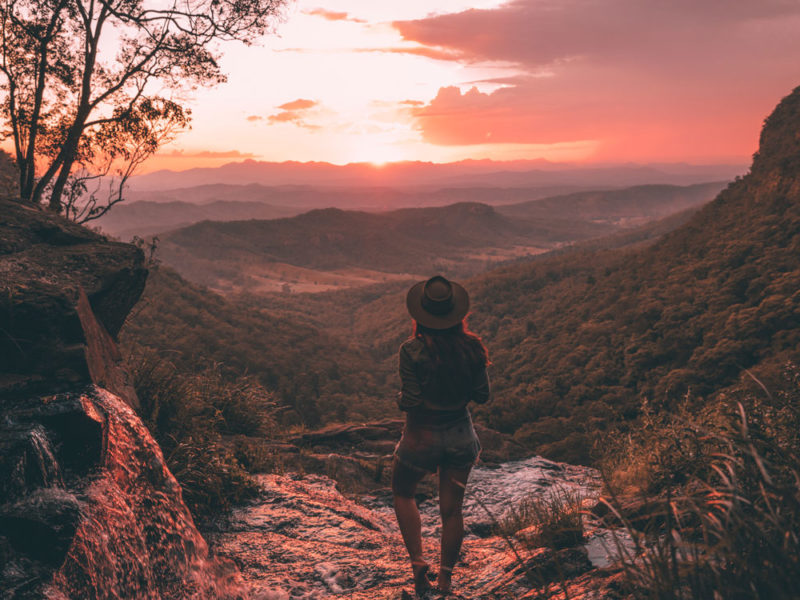 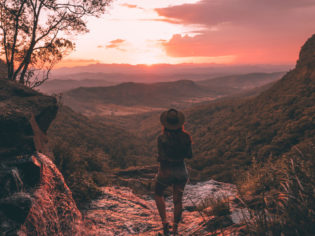 Immerse yourself in the World Heritage-listed Gondwana Rainforests of Australia during a month-long festival that celebrates one of the most precious areas of Queensland.

How lucky are we that we live in proximity to such wonders as the Gondwana Rainforests of southeast Queensland, the ancient lands of the Yugambeh peoples?

Gondwanaland was an ancient supercontinent that broke up about 180 million years ago. The continent eventually split into landmasses we now recognise: Africa, South America, Australia, Antarctica, the Indian subcontinent and the Arabian Peninsula. Today, the Gondwana Rainforests of Australia include the most extensive areas of subtropical rainforests in the world, added to World Heritage listing in 1986. There are nearly 60,000 hectares in Queensland alone.

All this is ours to enjoy… and importantly, to cherish and preserve. Wildlife, forests and other plant life are continually threatened by natural disasters such as the 2019 bushfires as well as human intervention and development. Now we have a chance to see and experience the regeneration of this natural Wonderland during an immersive month-long festival.

Thanks to support from the National Bushfire Recovery Agency and other sponsors (see website), we’re all invited to share a month of events and activities around Queensland’s beautiful Scenic Rim. The Gondwana Festival will include guided walks, talks and wild adventures from the base camps (and luxury lodges) of Binna Burra, O’Reilly’s Rainforest Retreat and Mt Barney Lodge, with ParkTours taking small specialised groups into some existing and new trails being opened specifically for the Festival.

“This is such a special place”, explains Binna Burra CEO, Jonathan Fisher. “This is not a festival where you’ll experience hordes of people. This is an immersion experience where people can rediscover and relax in nature and also challenge themselves physically if they choose to.” 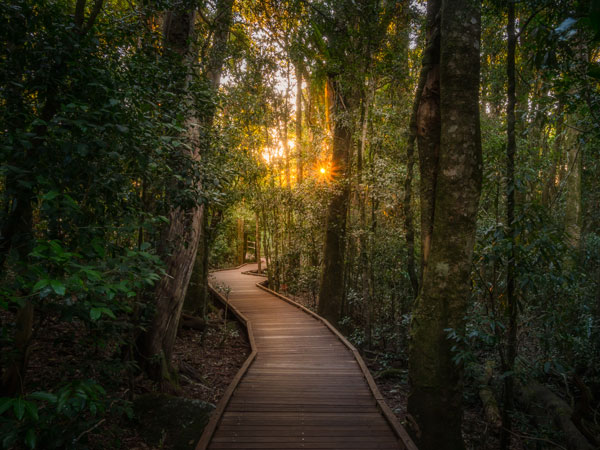 Booyong Walk… explore Lamington National Park from the festival base camps during your stay.

The Scenic Rim’s luxury lodges, retreats and campsites double as base camps for the duration of the festival with each accommodation hosting a range of unique activities and events to enjoy as part of the Gondwana Festival. 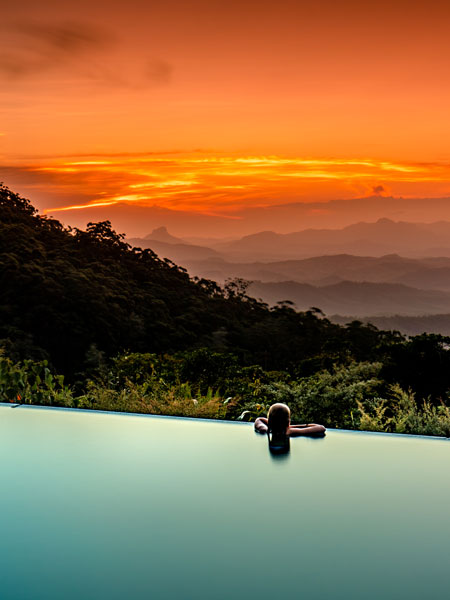 Watch the sunset from the infinity pool at O’Reilly’s Rainforest Retreat.

It’s well known that Binna Burra was partly destroyed by the bushfires in 2019, but the lodge is now up and running, and welcoming guests again. This is great news especially for enthusiastic past visitors who regard this place as one of Australia’s tourism treasures. Binna Burra currently has a reduced range of accommodation options, including camping, safari tents and luxurious Sky Lodges where you’ll wake up thinking you’re still dreaming, looking out from your balcony to misty vistas of nature in all its glory. The original Tea House is still open for breakfast, lunch and early dinner, with further extensions planned. The newly restored Groom’s Cottage café and cozy bar is open late afternoons. 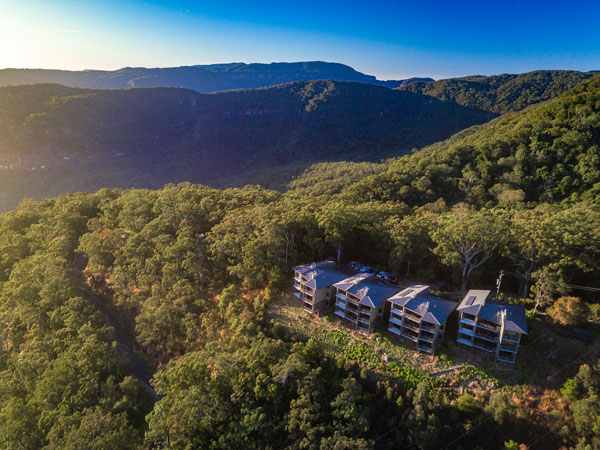 Immerse yourself in nature with a stay in Binna Burra’s Sky Lodge.

Many of the region’s walks and trails pass through or start at Binna Burra. The Gondwana Festival will kick off here with a launch ceremony on Monday March 1 followed by a week of bushwalking and rainforest experiences. From 14 to 18 March you can also sign up for Arthur’s Trek led by Lisa Groom of ParkTours on an exclusive five-day journey from Binna Burra to O’Reilly’s, on to the Lost World Valley and finishing at Mt Barney Lodge. The trek honours one of Binna Burra’s founders and Australian conservationist, journalist and author, Arthur Groom (Lisa’s grandfather) who advocated for the preservation of much of the Scenic Rim mountain ranges. 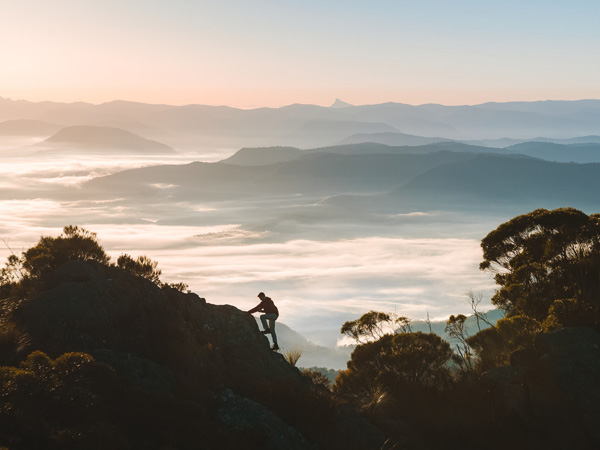 Equally famous in the Scenic Rim area is O’Reilly’s, founded as a guest house nearly 100 years ago and still operated by the family today. The O’Reilly philosophy is to offer every guest “green” experiences whilst the company’s core operational values strongly support the history, heritage and education of the surrounding Lamington National Park. For accommodation, there’s everything from a new camping area to Mountain View rooms, Canopy Suites and a selection of luxurious modern villas with spectacular views, an infinity pool and the Lost World Spa. 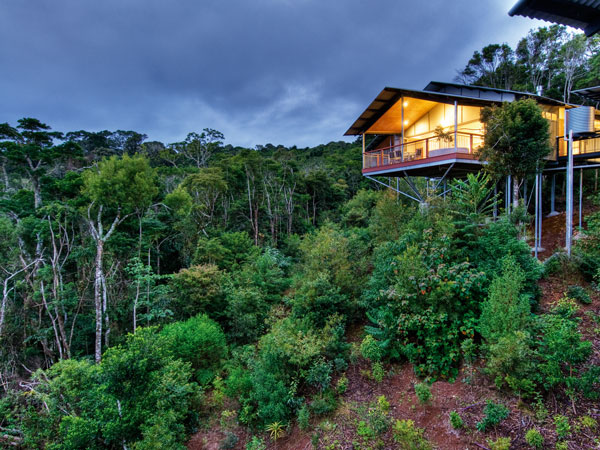 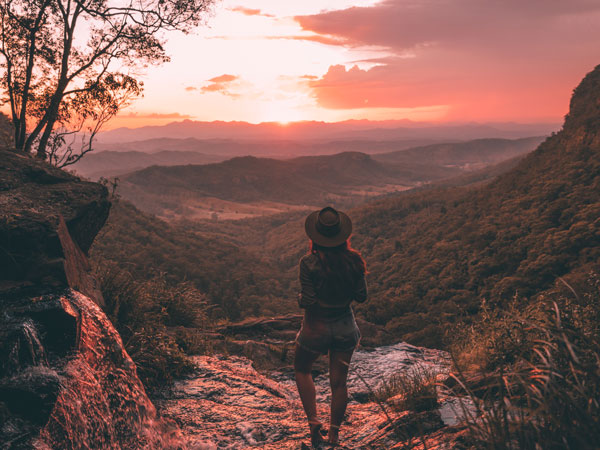 The Gondwana Festival is an opportunity to enjoy every activity O’Reilly’s has to offer, plus special events such as Autumn Bird Week from 7-12 March for dedicated and beginner bird watchers, hosted by local experts and guides in small groups. There’s also a day event on 7 March, Forests of Lamington, a walk and talk with leading rainforest ecologists and evolutionists Dr Bill McDonald and Ray Carpenter – as they explore the mysteries of these ancient forests located on Brisbane and the Gold Coast’s doorstep. 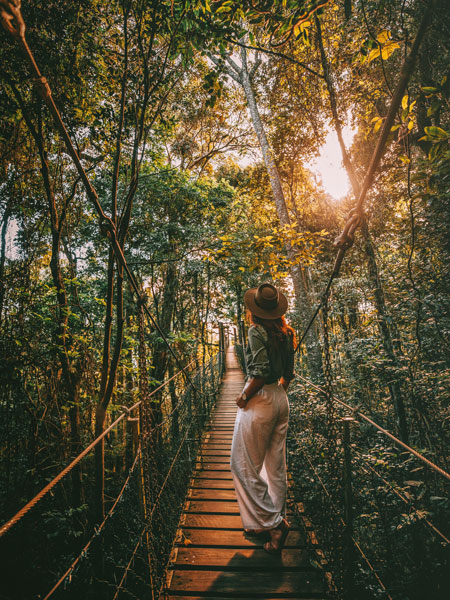 Advanced walkers and adventure seekers should not miss the Stinson Walk 29-31 March, honouring the life of Bernard O’Reilly who heroically saved the lives of two plane crash survivors over 82 years ago in Lamington National Park, highlighted in the Australian film starring Jack Thompson, The Riddle of the Stinson. 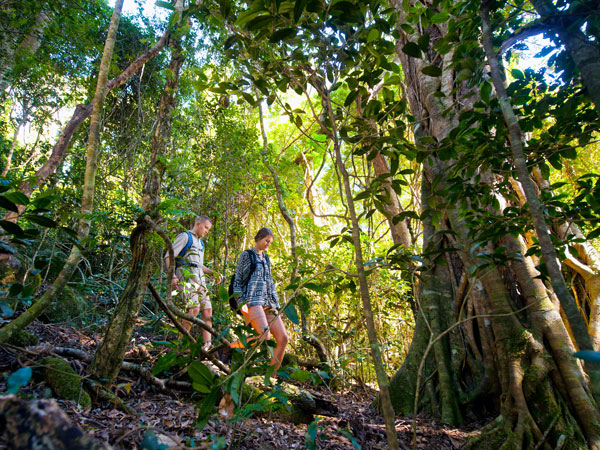 The Stinson Walk is for advanced walkers and adventurers. (Image-O’Reilly’s Rainforest Retreat)

In this dramatic mountain setting, from 19-21 March the inaugural Scenic Rim Adventure Festival starts at the base of Queensland’s 4th highest mountain (1359m), the ideal point of departure for the fit and adventurous aiming to climb Mt Barney and its associated peaks. 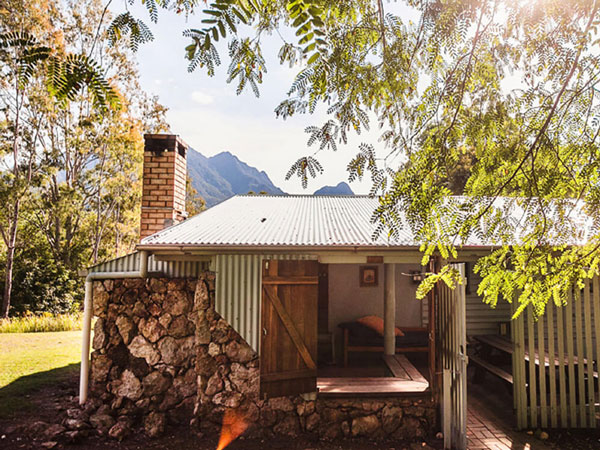 Stay in one of the idyllic cabins at Mount Barney Lodge.

The program arranged by Mt. Barney Lodge owners Innes and Tracy Larkin will include inspiring speakers including Michael Groom, unquestionably one of the world’s greatest big-mountain climbers, who while descending from the summit of Kangchenjunga suffered crippling frostbite and had the front third of both feet amputated. He’ll share with us his challenges and how he achieved his childhood dream to return to the Himalayas and climb Everest. Amazing story.

The comprehensive adventure program will also include live music, an under the stars film festival, adventure travel displays and children’s nature play activities, plus guided bushwalks, bushcraft survival and epic guided mountain expeditions to the top of Queensland’s most impressive peak. Camping and limited accommodation is available in a range of cabins on site.

The Gondwana Festival acknowledges and pays respect to the land and the traditional practices of the families of the Yugambeh Language Region of South East Queensland and their Elders past, present and emerging. 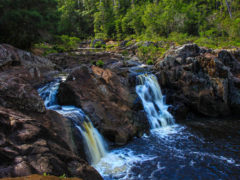 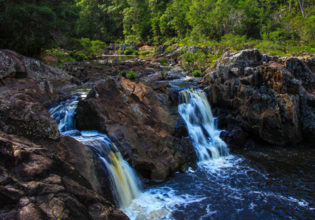 Where to find the best waterfalls on the Sunshine Coast

You’d be forgiven for thinking the Sunshine Coast is just one long stretch of sand, but if you reset your course inland there is a treasure trove of... 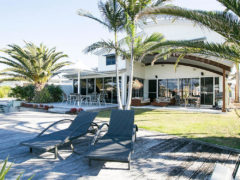 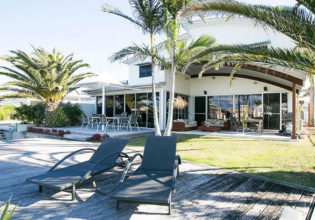 A guide to pet-friendly accommodation on the Sunshine Coast

Not only will these offerings impress your pets, but they’re also extremely people pleasing too. Queensland’s Sunshine Coast is one of the most p... 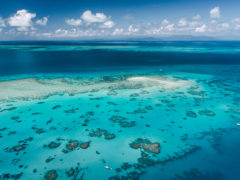 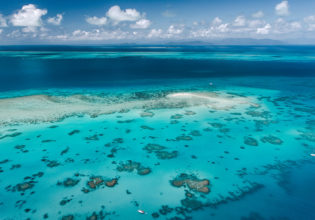 It's vast and incredible... and GOOD TO GO. From the coast to the islands, the cities to the outback, there is so much to discover this summer in QUEE... 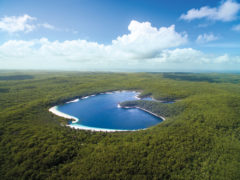 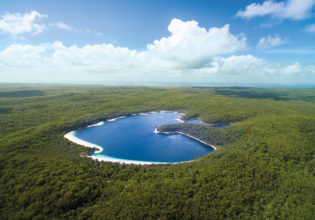 Experience Australia’s tropical islands like you never have before on a new Cosmos tour. White beaches, sparkling coves, aquamarine water and a ple... 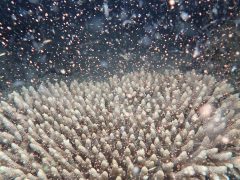 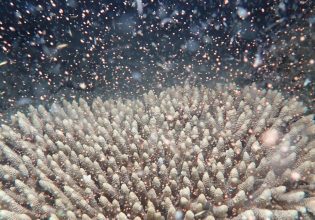 A cruise in the dead of night offers up the perfect opportunity to witness the wonder of nature in all its kinky glory. We board the Tusa Dive T6, a ... 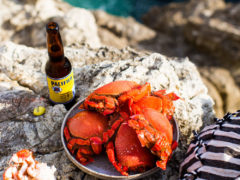 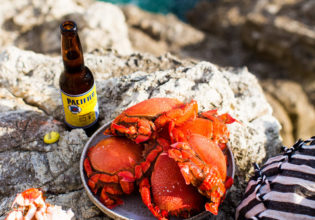