Chilling with the cubs at Mogo Zoo 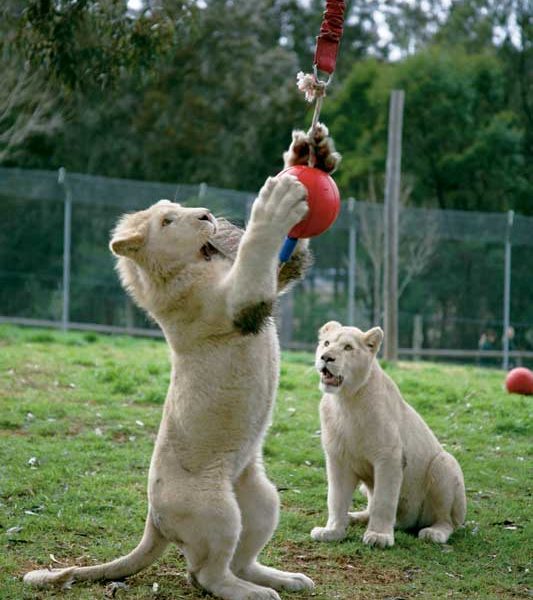 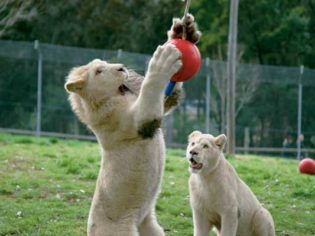 Xavier Jefferson has an encounter with some big cats on the NSW South Coast and, we very nearly end up one journalist down . . . .

We’re pretty lucky in Australia. Around every couple of corners, if you look hard enough, you can find a hidden gem – an amazing little pocket of Australia with a great story.

And Mogo Zoo is another hidden gem (in fact, we featured it in the 100 Great Things To Do In Australia You’ve Never Heard Of). Just five hours south of Sydney, the Zoo is doing a tremendous job of rescuing exotic species and breeding even more exotic species.

Their most famous resident (and success story) is the rare White Lion.

Three years ago they had three. Today they have 12, with a litter of five boys born only eight months ago. There are only 200 of the white genetic mutations in the world and Mogo is one of the most successful at breeding them.

When the initial cubs were born about 14 months ago, the kind folk at Peugeot saw a link – they have a lion on their crest – and have taken over much of the financing of the kitties. Being the most original of marketers, they called the very first cubs Per and Joe. (Get it? Per . . . Joe? Let’s just move on.)

And when Peugeot invited AT to have a look two weeks ago in a brand new 207CC, we couldn’t resist. (By the way, we reckon Jeremy Clarkson would describe the car thus: “If Barbie designed a car she’d come up with something close to this. And if she was trying to get even Ken to drive it, it would be the turbo version.” Yes, it’s a very fun city car and the turbo has some guts.)

All 12 cats were in the enclosure when we approached with the zoo dog – aptly named “Hassle” – in tow. They immediately ran over to us. There was a strange moment when Hassle touched noses with the kittens through the fence. Then the cats wanted to eat the dog and all hell broke loose.

Thanks to the Peugeot sponsorship, not only do the kitties have a great enclosure, we were allowed inside it with two of the one-year-olds. The South African handler gave us a briefing before we entered the enclosure: “If they run towards you, hold your ground. They will not try and harm you but they just want to play.”

Hanging with journalists you quickly learn that without a pen and paper they’re all bark and no bite. Everyone was nervous and stuck very close to the handlers.

When one cub started running towards us I counted how many people were between me and the cat. Two magazines were going to be a journalist down and I was outta there. The handlers intercepted the bounding cat with a firm slap just in time and manoeuvred her out of the way.

The cats are hours of fun to watch; their fur felt like a shorthaired dog’s coat and they did remind me of overgrown kittens.

The rest of the zoo houses some very lucky animals. There are two tigers and a jaguar that were rescued from awful circumstances. Their enclosures are not as palatial as the White Lions but they certainly have an improved life. Mogo also rescued two chimps that had been living in shipping containers for four years. Lewis and Holly are having a new enclosure built, and Zoo owner and MD Sally has shelled out more than $400k and counting for their grand surrounds.

Mogo’s other main attractions are their snow leopards, which no longer exist in the wild. Sally and her amazing team managed to successfully breed the leopards seven years ago. Back then this was the first litter of snow leopards born for 15 years in any zoo in Australia.

Mogo is certainly a special place doing special things (and we haven’t even mentioned all their fascinating primates). They’ve achieved all this without much government money – just two grants totalling less than $200,000 in 15 years.

Drop in for a wonderful and surprising experience. www.mogozoo.com.au