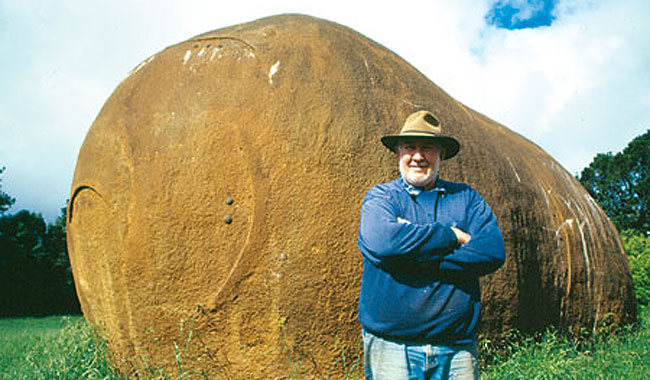 You say Big Potato, we say Big Potahto. Either way it’s garbage, so let’s call the whole thing off. By David Clark

Some Big Things started out with Big Ideas but various circumstances ensured they never amounted to much. The Big Spud, not unlike some of its more dilapidated Big siblings, has been a bit of a dud.

The area around Robertson, NSW, is known as the “Green Heart of the Southern Highlands.” It’s noted for its distinctive red volcanic basalt soil, excellent rainfall (60 to 80 inches per year) and mild winters; ideal conditions for potato growing.

Modelled on the North American Sebago (widely regarded as the best general-purpose spud), Robertson’s ten-metre long, four-metre wide, big, brown Ferro concrete potato was built in 1977 by local grower Jim Mauger. The inside is sprayed to look like mashed potato. The original intention was for the area to contain a Potato Information Centre but risings costs took their toll and the dream never materialised.

According to the Maugers, it’s hard to run a cattle farm and create and sustain a new tourism venture. There are so many possibilities – a themed potato restaurant/cafe is just one idea – but so little time. Up until two years ago, the Maugers sold potatoes from a shed beside the Big Spud, but lack of time to do it justice saw them forced to sell off the shed.

Sadly, the Big Potato is now in desperate need of some tender loving care and a lick of paint. There’s no sign, no souvenir shop (one can only lament the lost merchandising opportunities) and no sense that the local community has in the past taken any pride in its best-known icon. Vandals over the years have also taken to the white interior with rather more enthusiasm than is necessary.

Despite this lack of TLC, a lot of people have heard of the Big Turd (as it’s affectionately known) and locals seem to have developed a love/hate relationship with the thing; the Robertson community is now looking at ways of turning it from a neglected lump of rock into a local legend. They’re even evolving a myth that the Spud is actually a giant fossilized dinosaur dropping – one that turns into a giant wombat on misty summer afternoons and wanders the Robertson country lanes in search of its mate. When viewed from a certain angle, the Spud does indeed look like a wombat. And there are plenty of wombats in the area, much to the consternation of local farmers.

Sadly, when they get to high school, many of Robertson’s kids get teased about being from the Big Turd town. It’s hoped that this new myth will take the sting out of that harassment somewhat. After all, dinosaurs still exercise a firm hold on the imagination, and a fossilised dinosaur turd is definitely something to be proud of.

Not one of the more aesthetically pleasing Big Things, but if you’re an aficionado of the subject, it’s a photo opportunity not to be missed.