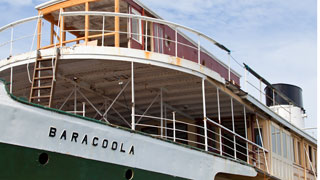 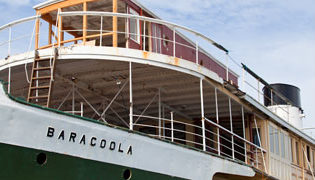 Ian Dodds explores the history of Manly ferries and the diamond in the rough – MV Baragoola. Images by Zoe Morley

Today the Manly Ferry is still a Sydney icon, but for the first half of the 20th Century, the 40-minute ride was one of Australia’s most famous tourist attractions.

For many of those years the ferry was operated by a private company, The Port Jackson and Manly Steamship Company, and it played a vital role in developing Manly as Sydney’s playground. Near the wharves they built public baths and invented a slogan still used today – “seven miles from Sydney, a thousand miles from care”.

Remember those days? The smell of the sea, flocks of pesky seagulls, a noisy wharf with bells constantly ringing, Burts Milkshake Bar and ferry tokens…

As a child, my grandparents told about the South Steyne. They remembered her entering Sydney Harbour for the first time in 1938 – boarded against the stormy seas – but looking modern and sleek. She was the best Art Deco had to offer, and for a boat she looked pretty damn sexy!

In time she became the grand old dame of the harbour. She’s now moored at Darling Harbour. And she’s still pretty cool.

In the centre of the lower deck was a viewing platform, that looked deep into the ferry’s hull. And I remember looking down below – where you’d see men keeping the hot triple-expansion steam engine’s turning.

She was a living, breathing beast – and as a young boy, that was a sight which kept me entertained for the whole ride.

And you can see all of that still today. South Steyne is now a fine restaurant, but all are welcome on board – and well worth a look around.

But like the Curl Curl and Dee Why – South Steyne was an imposter. She was built in Scotland and we only adopted her as our own.

That brings me to this next story.

Being alongside the fleet’s show pony was a number of other ferries. They became known as the B-Class ferries. And their names all began with “B”.

Baragoola was the last of the “B” class ferries to be built. She was launched in 1922 and on Valentine’s Day she turned 90; perhaps the original “love boat”.

But what makes her important, is that she was built right here – at Morts Dock in Balmain on Sydney Harbour.

And as I write this, she’s being restored as a tourist vessel and museum.

But boy, has this ferry lived life dangerously, coming incredibly close to being scrapped on three occasions.

She was built for the Manly run as a steamship, her design was to look pretty much identical to her older sisters. The name Baragoola was derived from an Aboriginal word for “the flood tide”.

But unlike her older sisters, the designers decided to experiment a little. They made her a couple of feet wider to sit more passengers, and a tad shorter to make her lighter and faster.

But they got it wrong.

Poor Baragoola was a fat tub! She was slow and comparatively uneconomical to operate. So for a while she sat idle waiting for a decision on her future.

In the end noone could justify scrapping a new ferry, so she was consigned to special “pleasure cruises”.

This meant the ferry remained relatively new and not worn out by the hard yakka of the constant Circular Quay – Manly slog.

By the 1950s the Port Jackson and Manly Steamship Company became excited about converting their vessels to diesel. Bellubra had a successful conversion, but Barrenjoey’s dieselisation was so expensive, the company nearly went broke.

This was because the constant cross-harbour slog had worn the ferries out.

After Barrenjoey they needed to dieselise one more vessel and Balgowlah was in line for the conversion, but her similar condition left the task unaffordable.

Looking for a cheap option, the company looked at other clapped-out vessels on scrap row before taking a look at the fat, old obsolete tub – Baragoola.

The cruising life had left her in good shape, and as fate would have it, she was taken off scrap row and swapped with Balgowlah. She was in such good condition that she was left pretty much in her original state – except for the new engines and a shorter funnel.

So the fat lady became the pride of the fleet until her retirement in the 1980s. Since then, she has been heritage listed, neglected and the centre of huge mooring debates – until mid 2010.

By that time a scrap merchant had bought her and processes were put in place to lift the heritage orders. The owner believed the vessel was finally in unsalvageable and NSW waterways were within three hours of ordering her destruction.

But a heritage group got in the middle and negotiated a buy-out deal, challenging reports on the boat’s condition.

After a midnight ministerial intervention – the State Government agreed on a preservation plan if a marine inspector would certify the vessel safe.

The report came back and while the vessel looked run down, it was deemed more than salvageable – she could be maintained with minimal outlays.

Since then, the ferry has been in the custodianship of Baragoodla Preservation Association.

They have regular open days and have even got much of the machinery working again – despite quarter of a century of neglect.

On board she’s amazing. With old wooden sash windows, a gentlemen’s ‘smoking lounge’ and a ‘ladies saloon’ – an incredible hangover of the 1920s that has survived 60 years of social changes.

She’s graced by a grand timber staircase between the two decks, and has outdoor areas for those brave enough to ride into the waves.

But the real magic is downstairs, below the waterline. Huge diesel-electric engines, water pumping machines, power generators and even remnants from the steam era.

You can see this now for the cost of a donation.

But their grand plan is to restore the ferry as a pleasure cruiser and conference venue, planned to happen within the next five years.

When complete it’ll be a sparkling diamond – reminding future generations about the dawn of Australian tourism.

To visit MV Baragoola, contact the Baragoola Preservation Association. They are onboard most weekends.