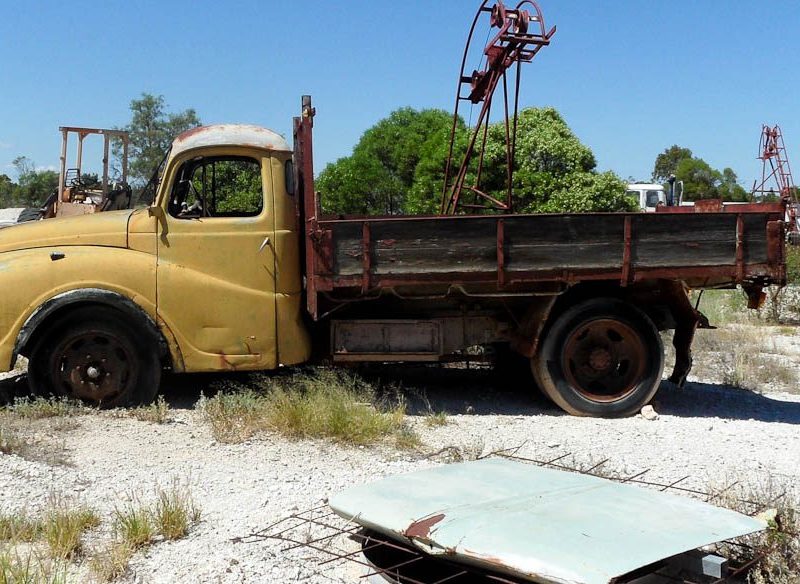 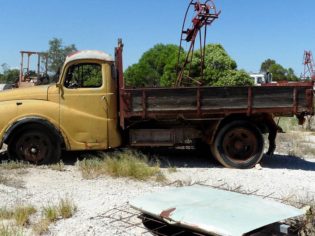 For the past four hours, in the blazing sun and scorching 40-degree heat, I’ve been meticulously combing though mounds of rubble for miniscule shards of glimmering colour on an otherwise plain rock.

From sheer desperation to find an elusive opal, I keep scrambling over rocks, thinking the next one I turn over will be the ‘one’. It’s been almost a week of ‘fossicking’ so far.

Greeting you when you arrive in Lightning Ridge is a big sign with an emu, which has has opals for eyes, and a population sign that reads “?”, but more on those later…

My first fossicking mistake was thinking I was looking for an opal like those in the pictures. I quickly learnt that I should actually be looking for a bit of rock with a spot, or ribbon, of shimmering red or green. Don’t be fooled by bluish rocks, they’re just potch, worthless, colourless, rough opal.

As a tourist it’s all about the ‘fossicking,’ searching through piles of rocks that have already been carefully sifted through by miners. As you can imagine, it is painstaking work, often fruitless, and relies on sheer luck – much like real underground opal mining. 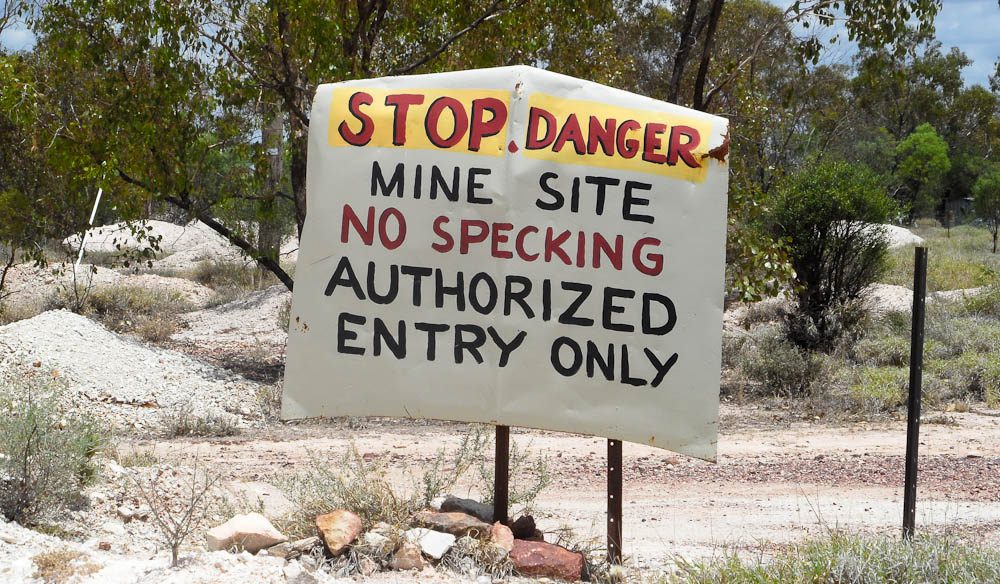 By order of the door: fossicking is banned at this mine – Aneta Nedimovic

Around town, you will soon notice different coloured car doors with numbers on them. Follow the yellow (red or blue) doors, like Dorothy followed the Yellow Brick Road, and you’ll be off to see the wonderful world of Lightning Ridge.

Amongst the barren dirt paths, around the mullock humps and big piles of white stone rubble, you will find Bevan’s Cactus Nursery with the largest collection of rare cacti in the southern hemisphere; Amigo’s Castle, built by one man; Astronomers’ Monument with its sad and twisted history; and the ‘Goddess of 67’ old church film-set from the award-winning film starring Rose Byrne.

The Ridge features the largest open-cut opal mine in NSW, ‘3 Mile Open Cut’, and its famous ‘Lunatic Hill’, at its peak hosting around 1000 individual fortune seekers. From the viewing platform, you can truly appreciate its vastness.

‘3 Mile’ wouldn’t be complete without meeting Brian, a friendly, retired opal miner who now sells his opals up on the hill. Like many locals, he is keen to reminisce about his days as a miner. He gave us a dramatic rendition of the time he thought he was going to die in a mine when it started to collapse.

Black Opal Tours takes you through the town’s major landmarks, including an opal cutting and polishing demonstration. I learnt more about Lightning Ridge from our guide, John, than from any other source of information in the town. 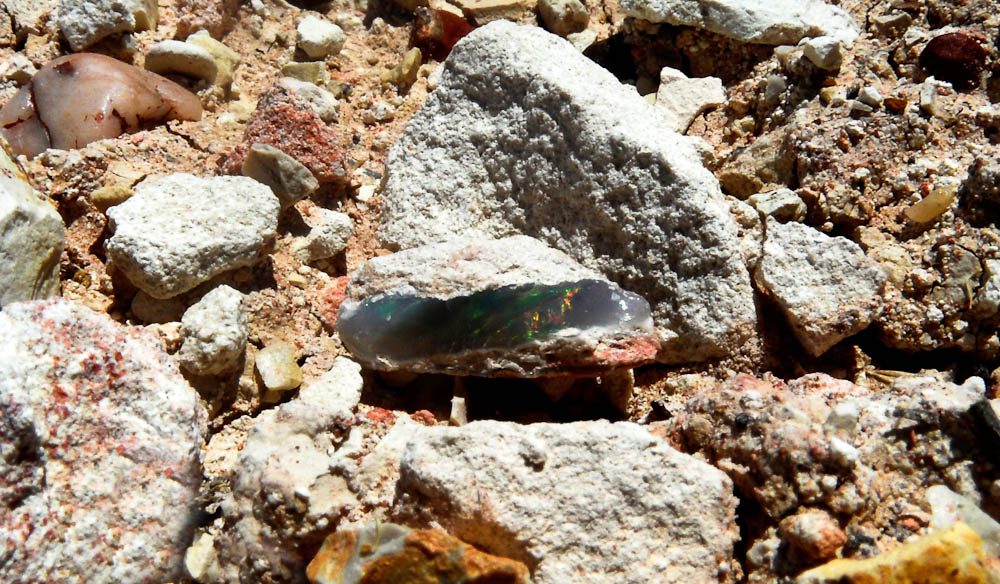 He also had an answer for the “?”sign at the town’s entrance: while there are 2600 registered voters, the town has so many transient inhabitants and camp dwellers it’s hard to keep track of all the people. Unofficially the population is estimated at around 10,000 in the mining season.

This Lightning Ridge populace is as colourful as its prized possession, a multicultural community that are just that little bit quirkier than people outside the town.

The locals pin this quirkiness down to the fact that they leave everything behind, for years of labouring away underground, hoping to strike it rich here. It takes a certain type of character to be able to stay relatively sane after digging in a hole for 30 years.

John says only 1 in 1000 miners will actually strike a fortune. He told us stories of how miners struck rich, $27 million dollars rich, but were broke a couple years later with the same gambling nature that lead them to opals, leading to their demise.

As far as accommodation goes, The Opal Caravan Park stood out from the rest for us for our needs – spacious, clean and relatively new. The park’s fossicking area is decked out with old mining equipment and the pile of rocks have been brought in from 3 Mile, which for me at least, provided the best finds.

A bore in name only 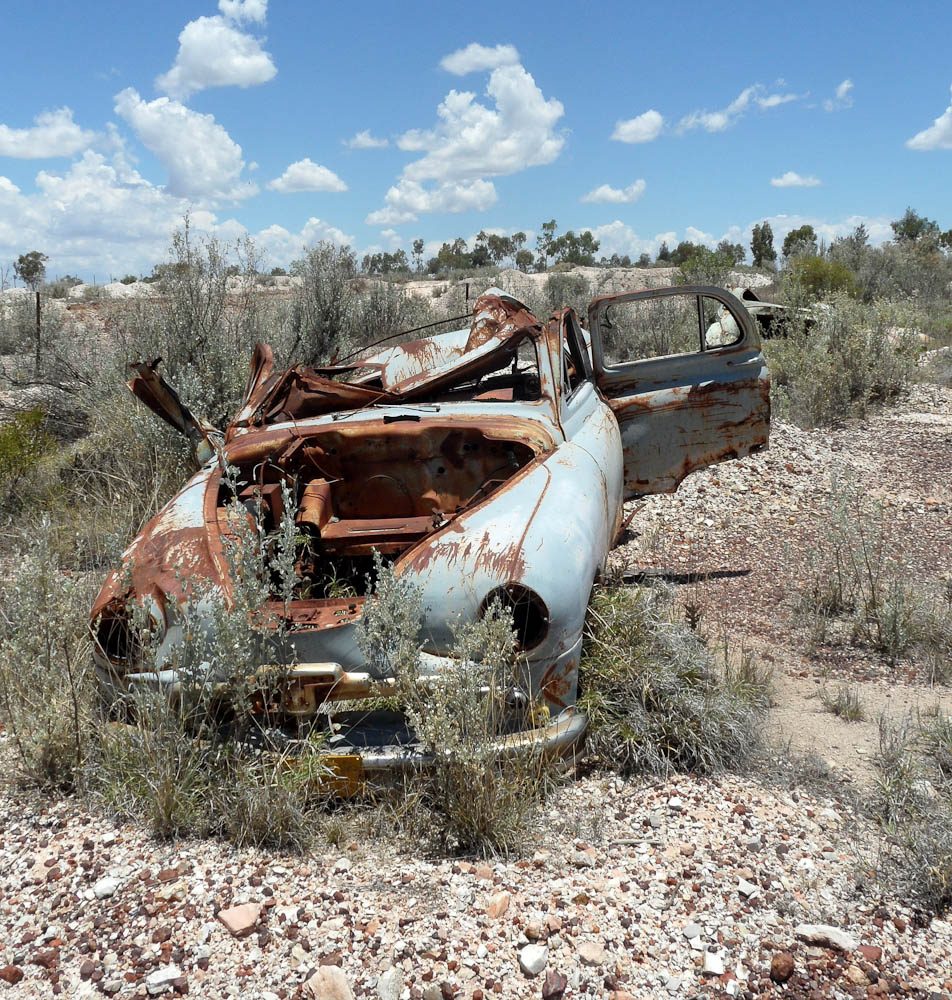 Only 100m down the road is the hot artesian bore bath that became a regular feature of our daily routine. It’s busy from dawn till late in the evening but between 7am and 8am is the best time to visit – you avoid the bugs and the inevitable headache from the combination of 40-degree heat and 40-46 degree water. The mineral rich water is pumped from the Great Artesian Basin, the same water that Moree is famous for, except here it’s free! Soaking for a couple hours is the most relaxing and rejuvenating hot bath I have ever had.

The bore also serves as a meeting place, to sit around and exchange stories. Eastern Europeans are common visitors (and pilgrims) to the baths, eager to share their stories of miraculous recoveries, from cured aching joints to being able to walk again after doctors suggested otherwise.

You can’t leave Lightning Ridge without visiting the John Murray gallery, the artist behind the opal-eyed emu welcoming you into the town. His art is humourous, capturing the essence of the town and its people. The emu itself is a brilliant depiction of what happens to people touched by opal fever.

And tourists like myself waltz in to town curious about the pretty rainbow gem but by the end are bewitched. I would walk around town staring at the ground thinking I might find some just laying there. After the prolonged exposure to the gem’s brilliant colours, I would see its image when I closed my eyes and in everyday objects.

I kept searching for some trace, anything at all. I fossicked at the camp site, the information centre, every tour I went on, every pile of rock and clay that wasn’t marked as prohibited, after all I didn’t want to be a ratter (an opal thief).

There’s a real thrill in finding a trace, a glimmer that catches your eye in the white fossicking pile. You then put a bit of water on it, excitedly pick it up and turn it in the sunlight, dazzled by the colour shining back at you and proud of your new souvenir. 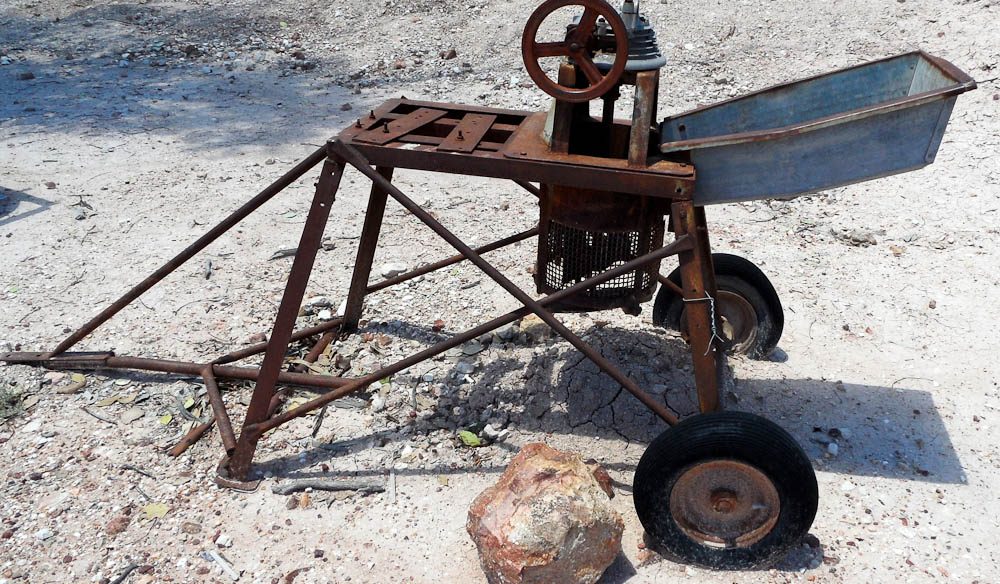 The Ridge is a graveyard for old mining contraptions.

1. The black opal is the gemstone of NSW and the opal is Australia’s national gemstone.

2. Ninety-five per cent of the world’s opal supply comes from Australia.

4. The Yuwaalaraay people are the Ridge’s traditional owners.

5. Local legend has it that the town got its name after a shepherd, his dog and 600 sheep were all killed after being struck by lightning in the 1870s.

7. Halley’s Comet, found in Lightning Ridge in 1986, is in the Guinness Book of World Records for the largest uncut black opal, the size of a man’s fist. 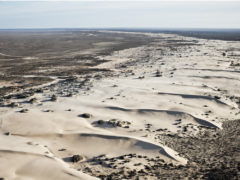 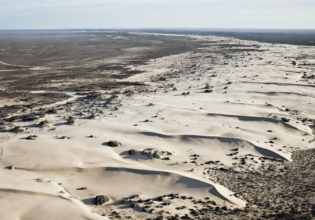 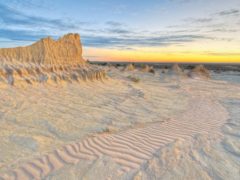 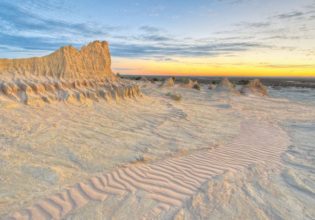 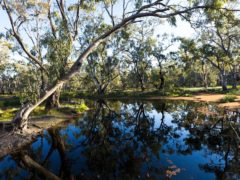 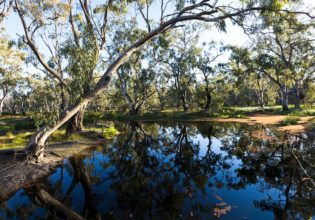 Yanga National Park: a haven for history, wildlife and scenery 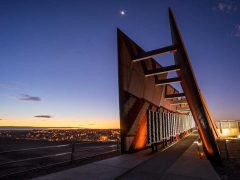 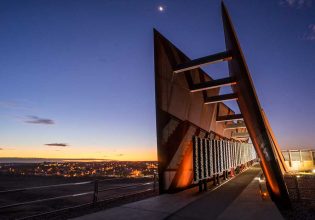 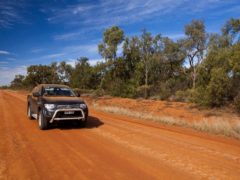 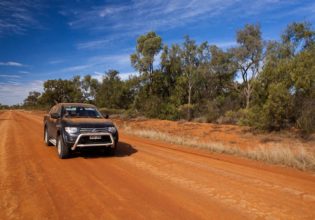 Bourke and beyond: an iconic slice of Outback Australia

Jessica Schumann seeks out the iconic in Bourke and stumbles upon some cultural delights on the way. Bourke is the gateway into south-west Queensland...