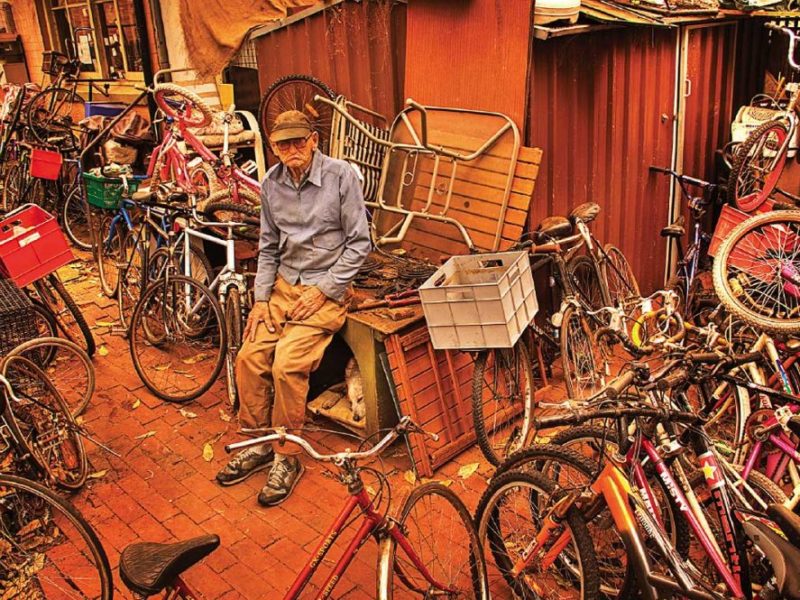 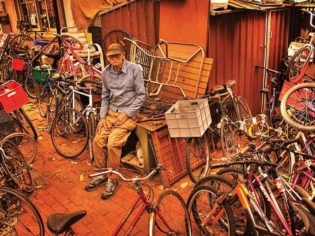 Through a series of striking portraits, Sydney-based photographer North Sullivan has brought art to the streets of an eclectic NSW city suburb and snapped his way to the heart of his community. Words by Flora King
When Sydney-based photographers North Sullivan and Tom Psomotragos struck up a discussion with Glebe Chamber of Commerce President Paul Angell about a potential community photography exhibition, Angell grabbed the idea with both hands and made it happen. One year later and in time for the Chamber’s 150th anniversary, the streets of the eclectic and character-full inner-city suburb were transformed into a neighbourhood hall of fame, with 150 life-size portraits of local residents hung in 60 different locations, including pianist Bridie King, her face lit with laughter; two rappers slouched by a gleaming Aston Martin; smiling James the Big Issue seller; and artist and musician Reg Mombassa in his paint-splattered studio to name a few.

Sullivan is a prestigious commercial photographer and the eye behind some of Australia’s best-loved ad campaigns, with the Qantas Choir being perhaps the most famous. The loyal Glebe resident was responsible for a third of the 150 Locals exhibition – but why choose Glebe to shoot? “Because it’s real. It has a diversity of community unlike any other suburb in Sydney; there’s the student element, the family, the bohemian and the Aboriginal, the poets, artists, musicians and activists. It has multi-million dollar mansions side by side with public housing and not, dare I say it, the snobbishness that some suburbs have acquired.”

And so, in celebration of the area’s social fabric, creative roots and rich Victorian history, 150 Locals came in to being in this wonderful, unconventional, large-as-life setting. The vast portraits (50 in colour by Sullivan, 100 in black and white by Psomotragos) were hung everywhere from shop windows to apartment façades, café walls and back roads. “By bringing art to the streets, the idea was to tell a story, to give people an excuse to just wander around and absorb or somehow connect with Glebe’s unique culture.”

Sullivan’s Glebe images are beautifully enhanced using hyper real techniques and, with their distinctive energy and intensity of colour, are true reflections of the community they portray. “I wanted to capture the characters, but also their surroundings. Environment was critically important.” And whether it’s a group of basketballers on their local court under a mottled evening sky, an author submerged by the colourful editions of one of the area’s many bookshops, or Mitch the bike man amidst his tangle of wheels, each and every shot achieves a powerful sense of people and place.

“The exhibition brought all different elements of the community together and gave them something for which to feel mutually proud,” says Sullivan. He was particularly touched when a young local girl sitting in the courtyard outside his studio called him over to say how much, since the exhibition, she’d grown to love her neighbourhood.

Mitch the Bike Man // Infamous among the two-wheeled fraternity of the suburb’s “bottom end”, Mitch sits patiently at his back gate most afternoons. A raggedy collection of cycling relics lines the gutter like the second-hand cars on Parramatta Road. His backyard is stacked with a jumble of bikes of all descriptions while Rex the loyal dog looks on.

Bridie King // We arrived at the legendary blues pianist’s home to find her overflowing with energy and enthusiasm, but found that her small house visually cramped her exuberance. A quick conversation revealed her love for the grand piano at the home of a dear friend, Johnston Street’s famous Gothic Mansion The Abbey. Destined for the auctioneer’s hammer, we had the rare privilege of shooting Bridie as she cavorted and reminisced in the hallowed dining room with the beloved Grand.

Peter Travis // We captured the celebrated international ceramic and fabric artist in his Mascot studio, working on a major installation for the recently completed St John’s Cathedral Brisbane. Early in his illustrious career, Peter designed the iconic Australian men’s swimsuit, the Speedo.

Chris O’Doherty, aka Reg Mombassa // A member of the ’80s pop band Mental as Anything, Reg met his fellow band members at Art School. By the ’90s he was known as much for his work on iconic surf label Mambo as for his music. Reg now devotes the majority of his time to painting and art in his attic studio at home in Glebe.

Colin Stokes // The broad diversity of Glebe’s population raises many challenges. Not least the disparate offspring of the suburb’s public housing estates. Colin, a youth worker, is a rare individual, a no nonsense, knock-’em-down bloke with a heart of platinum. His care and devotion for the troubled youth from the neighbouring streets is reflected in their respect and affection for him.

Verity Firth MP // Verity is the NSW Member for Port Jackson and the current Minister for Education. A long-time Glebe resident, Verity is a familiar face at local events and a champion for the community in the halls of Macquarie St.

Robyn Lawrence // A notable artist in her own right, Robyn is also the force behind Glebe’s annual art show. She’s most often found in her studio at the end of the garden in the leafier domain of The Toxeth.

Jack Mundy // Jack is an unassuming legend. One of the few people who can truly lay claim to the Sydney skyline. A working class bloke who harnessed the power of a largely uneducated immigrant labour force to take on the might of government and won. Glebe in particular owes Jack a debt of gratitude wider than a six-lane freeway – one that was destined to cleave the suburb in half, taking with it some of the inner west’s most historic houses as it motored west through the heart of Wentworth Park on its way to Canberra.

Barry Canaham // Barry has been living in his Toxeth bed-sit, piled high with furniture, artworks and belongings, for 18 years. He’s a jazz drummer turned keyboard player who deviates into the world of painting and art. On the morning of our shoot, Barry was a little more subdued than usual. Through the course of the session, downing strong coffee and puffing on a cigar, he divulged that the bottle of Teacher’s Whiskey sitting on the table had been full the night before. He and a young lady friend had made a substantial impact on it through the course of the evening.

Sister Xavier // Now in her 90s, Sister Xavier is the oldest resident of the Saint Scholastica Convent attached to the Catholic girl’s school in Avenue Road. As a younger devotee, Sister Xavier spent many years as a missionary in Japan.

Vincent Buchanan & Kieran White // Vinnie and Kieran are two local rap artists that form the hip-hop crew Str8 Ballaz. Their recent CD was recorded and produced with the generous support of the local Glebe Youth Service. We shot this outside my photo studio during the filming of their video clip, with an Aston Martin borrowed from a friend.

John Ogburn // A painter and teacher, John is well into his 80s and suffering poorly from Parkinson’s and the decline of old age. His studio is lost in a maze of back lanes in the heart of Glebe. Disguised as a common shed, the interior wafts with the romance of linseed oil, stacks of canvases and tables clustered with grubby tubes of Windsor and Newton, with accompanying festoons of motley brushes.