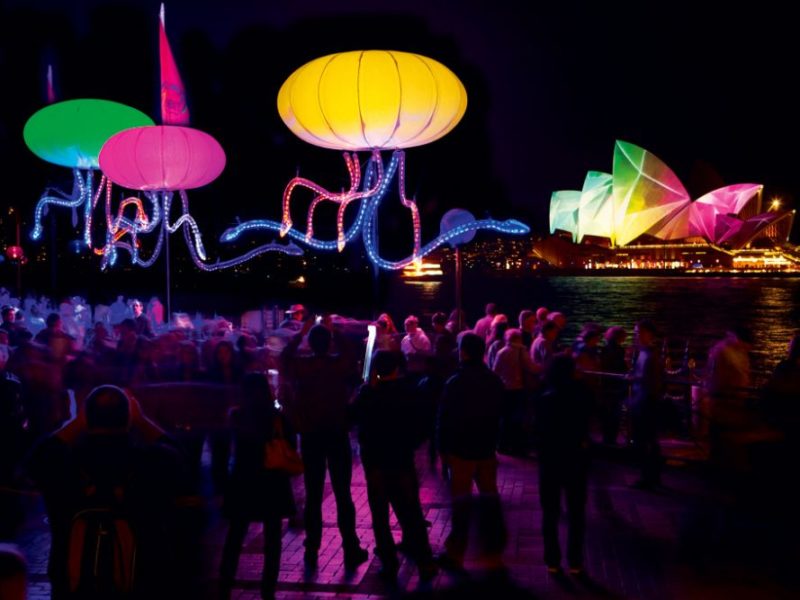 SYDNEY COMEDY FESTIVAL
April 24-May 12
Get the giggles at Sydney’s premier comedy event, featuring both Australian and international comics in more than 300 shows across 15 venues. Acts include Ross Noble, “Chopper”, Stephen K. Amos and Jimeoin.
sydneycomedyfest.com.au
VIVID SYDNEY
May 25-June 11
See Sydney light up with this annual celebration of music, light and creativity. Staged on the Sydney Harbour foreshore at Circular Quay, there will be more than 50 light-art sculptures, light installations and projections including the illumination of the Sydney Opera House sails.
vividsydney.com
SYDNEY ROYAL EASTER SHOW
April 5-18
It wouldn’t be Easter without Australia’s largest carnival, offering rides and slides for the kids, annual agricultural comps and petting zoos, The Stockman’s Ride and Sydney Royal Rodeo Series, as well as gourmet delights in the Graze Food & Wine Zone.
eastershow.com.au
BYRON BAY BLUESFEST
April 5-9
Sit back, relax and soak up the soulful live tunes played at the annual Bluesfest, camped at Tyagarah Tea Tree Farm. Acts will include John Fogerty, Ziggy Marley, Blue King Brown and John Butler Trio. There will also be food and market stalls.
bluesfest.com.au
PORT MACQUARIE IRONMAN AUSTRALIA TRIATHLON
May 6
Join more than 1500 others participating in this gruelling event, involving a 3.8km swim in the Hastings River, a 180km cycle alongside the Pacific Ocean and a 42.2km run to the city centre.
ironmanportmacquarie.com
SYDNEY WRITERS’ FESTIVAL
May 14-20
One for Sydney’s intellectuals – this year’s guests include Jeffrey Eugenides, Kathy Lette and Jeanette Winterson.
swf.org.au